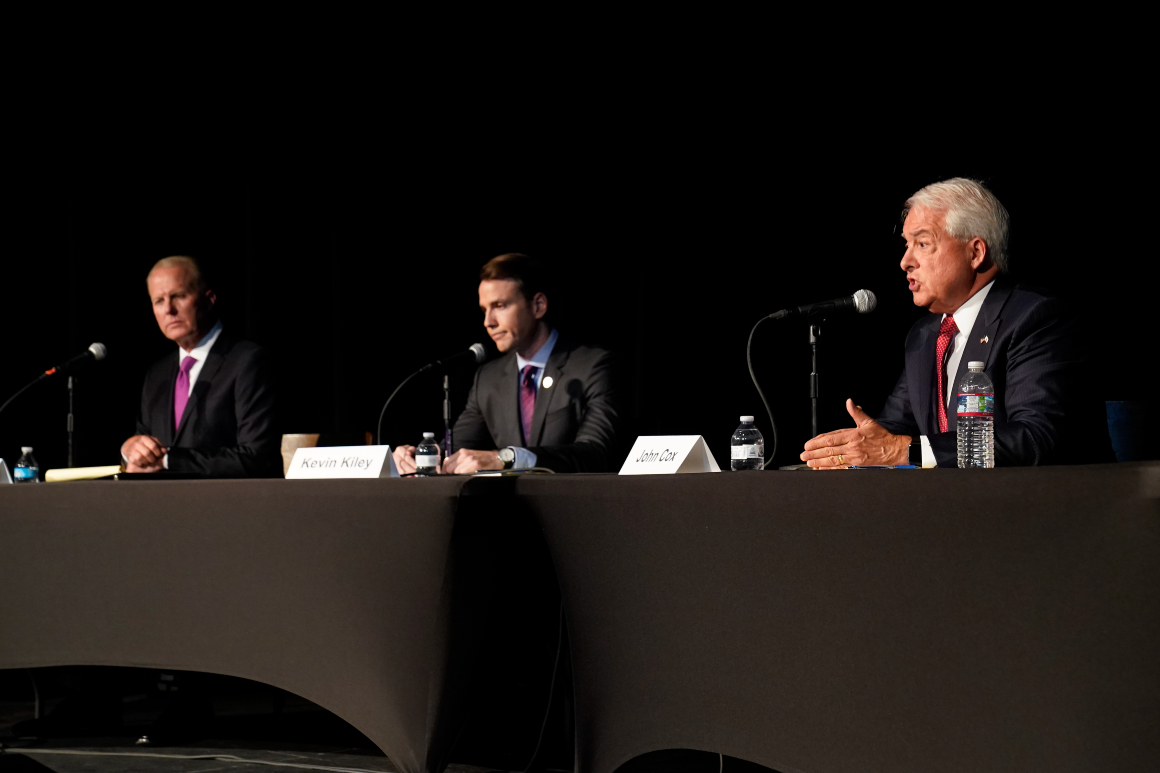 “I sure wish Larry were here to defend this position, and he should be,” Cox said in response to a question about Elder’s call to abolish a minimum wage. Assemblymember Kevin Kiley said he disagreed with Elder’s position.

Faulconer went farther, decrying Elder’s “indefensible” opposition to a minimum wage. Faulconer also brought up a 2000 Capitalism Magazine essay in which Elder wrote that “women know less than men about political issues, economics, and current events.” Elder had pointed to a University of Pennsylvania survey that he said “confirmed women’s lack of knowledge of the issues.”

Despite leading in the polls, Elder has declined to participate in debates unless Newsom joins in, depriving voters of a chance to hear from the GOP frontrunner and preventing Republicans from engaging with a prominent rival. Earlier Tuesday, former Rep. Doug Ose stunned the field by announcing he had a heart attack and was dropping out of the race hours before he was scheduled to debate.

The nearly hourlong event was organized by the Sacramento Press Club and held at the historic Guild Theater in Sacramento’s Oak Park neighborhood.

Likely voters are poised to narrowly reject the recall, based on recent polls, but much depends on unpredictable turnout. The California recall ballot has two questions: should Newsom be recalled, and who should replace him if he’s removed from office. Elder is leading among replacement candidates on the second question, but that would become moot if a majority of voters decide to keep Newsom in office.

But the candidates on stage Tuesday night trained their fire on Elder, underscoring his rapid rise to the top of a crowded GOP field. Faulconer’s fierce attack in particular highlighted the former San Diego mayor’s need to make up ground or make inroads with centrist voters as Elder claims a more conservative swath of the electorate.

“I’m going to call out when I think something is wrong … when I saw those comments directed about women, directed about pregnancy discrimination, that’s not right,” he said afterward. “That’s not right for anybody of any political party or background. That’s not what you want to have your governor doing or talking about.”

Elder’s campaign did not immediately respond to a request for comment.

Faulconer, Kiley and Cox otherwise treaded common ground during the hourlong event in Sacramento. All three said they would do away with Newsom’s statewide mandates around masking and vaccinations, arguing local governments and school districts are better positioned to respond. They similarly backed offering parents more choice over schools.

“It’s not about mandating and taking a one-size-fits-all approach,” Faulconer said. “It’s about letting the local public health officials make those decisions for themselves. we’re not going to mandate our way out of Covid-19.”

The candidates also assailed Newsom for his wildfire prevention efforts, saying mismanagement of California’s forest has played as significant a role as climate change in fueling ever-larger blazes. They argued California must pursue a larger mix of energy sources beyond those pushed by renewable electricity mandates.

The debate began on an unusual note. Cox was interrupted during his opening remarks by a man who walked up to the stage and served Cox with legal documents seeking repayment of some $100,000 in outstanding debt from his 2018 campaign.

Soaring Republican enthusiasm has Newsom facing a tight contest despite Democrats having a nearly 2-to-1 voter registration advantage. Republican voters are more motivated to turn out than their liberal counterparts, putting the onus on Newsom and Democratic allies to convince their voters to fill out the millions of mail ballots that have begun arriving at homes around the state.