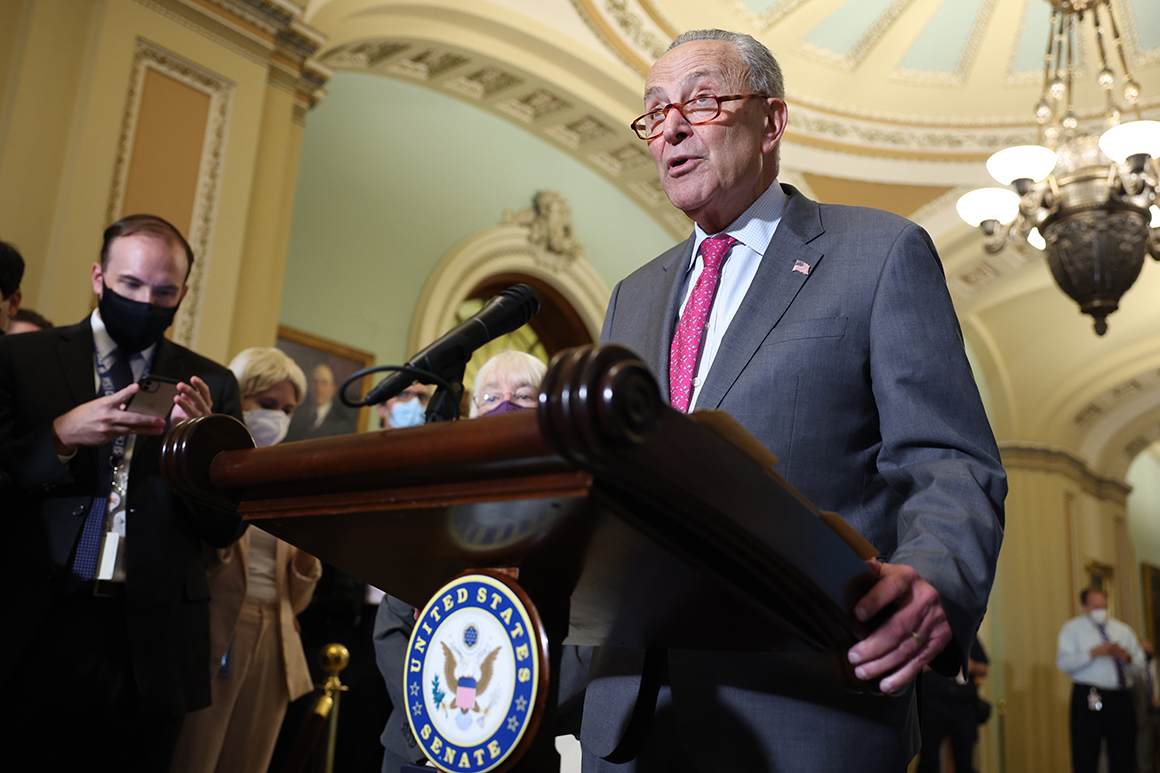 The Senate is racing to finish work on its bipartisan infrastructure bill, with some members of both parties pushing for a final vote as soon as Thursday evening.

Completing the $550 billion package of spending on roads, broadband and other physical infrastructure would require a complex agreement between party leaders but would speed up consideration of one of President Joe Biden’s top priorities. And on Thursday afternoon, a nonpartisan budget analysis was released by the Congressional Budget Office — a key development that could clear the way for a final vote.

Still, it began looking less likely the Senate would immediately complete its work late Thursday evening. A large number of Republicans are also planning to fly to Wyoming for former Sen. Mike Enzi’s funeral Friday, which set up a time crunch.

And as negotiations dragged on into Senate Majority Leader Chuck Schumer moved to end debate on the infrastructure bill, setting up a pivotal Saturday vote. But he also said the bill could be finished more quickly, and with more amendment votes, provided all 100 senators could come to an agreement.

“We’ve been working all day. But we aren’t there yet as work continues on the agreement,” Schumer said before a vote on a judicial nomination that allowed all senators to discuss the matter. “I believe we’re very close to an agreement and see no reason why we can’t complete this important bipartisan bill.”

Senate Minority Leader Mitch McConnell warned earlier in the day that “we still have amendments that need to be processed. Once they are we’ll be able to wind things down.”

A Republican senator familiar with the effort to expedite things said the goal was to finish the infrastructure bill Thursday and immediately launch into a budget debate on Saturday. But it was apparent after a private conference lunch that several GOP senators, including Joni Ernst of Iowa, are still asking for amendments, according to Republicans.

Several conservative senators have signed off on wrapping up as soon as possible, including Rand Paul of Kentucky, Mike Braun of Indiana and Mike Lee of Utah. Paul said the bill’s finances are questionable and he won’t support it, but “I’m fine to finish whenever people get tired of whatever we’re doing right now.”

Many Republicans had been waiting for the Congressional Budget Office score, which dropped on Thursday afternoon. That score showed that the bill’s mix of $550 billion in new spending and the financing to pay for it would increase deficits by $256 billion over 10 years.

GOP leaders huddled on Thursday afternoon to discuss the path forward before a private party meeting of all 50 Republicans senators. Lee, the Steering Committee chair, is involved in the discussions.

“Everybody understands that right behind this is going to be the budget. And I don’t think anybody is looking to extend this out any longer than necessary,” said Sen. John Cornyn (R-Texas), who also attended the meeting in McConnell’s office.

Failing a broader agreement, Schumer’s moves on Thursday night set up a Saturday vote to overcome a filibuster, when the bill would need the support of at least 10 GOP senators.

Once the bill beats a filibuster, it will be on a glide path to passage. Immediately after that, the Senate will turn to consider a Democratic budget that will set up potential future passage of a spending bill as large as $3.5 trillion.

Ahead of day of haggling over amendments, Schumer defended his stewardship of the process and boasted that under his control the chamber has considered more amendments so far than during the GOP-run years of 2019 and 2020 combined. He also signaled he wants to finish the bill as soon as he can.

As of Thursday morning, the chamber had considered 22 amendments, the majority of them from the GOP. Republicans are privately signaling they are likely to put up the votes to advance the bill, provided Thursday’s amendment consideration goes smoothly.

“I literally don’t know [what will happen]. I know what we’re aspiring to do but there’s no agreement yet,” said Senate Majority Whip Dick Durbin (D-Ill.). “The general notion is the sooner the better that we can move to the budget resolution.”