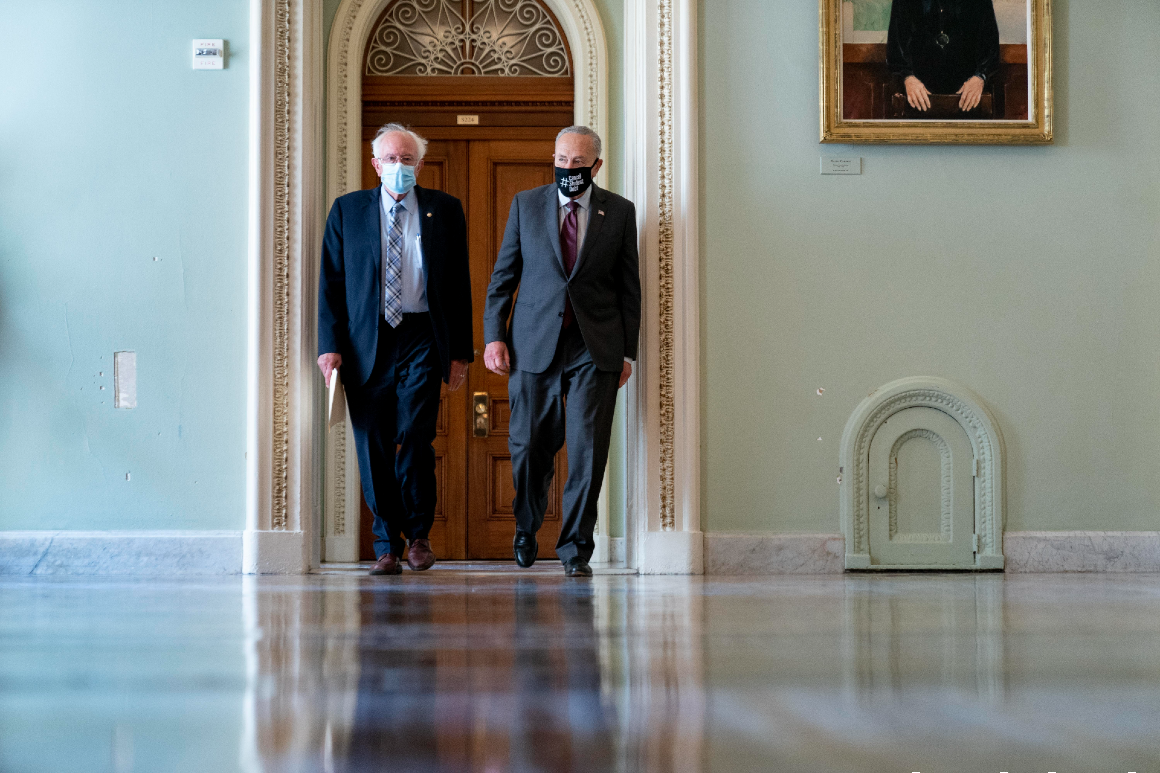 The Senate passed its bipartisan infrastructure plan Tuesday after months of fractious negotiations among lawmakers and the White House — but the path ahead may be just as torturous.

Now Democrats must keep their own party in line as they attempt to move the infrastructure bill forward in the House, where it will eventually be paired with a $3.5 trillion budget reconciliation package loaded with their party’s climate, health and social priorities. Because of the way reconciliation works, Democrats won’t need any Republican votes for that huge bill — but they will need every Democratic senator’s support.

At the moment, though, backers of the bipartisan deal are in a mood to celebrate.

“Rarely does federal legislation directly address issues that matter to all our constituents,” Sen. Kyrsten Sinema (D-Ariz.), the infrastructure deal’s primary Democratic negotiator, said in a victory lap on the Senate floor before the final vote. “How many times have we heard in recent months that bipartisanship isn’t possible anymore?”

She said the bipartisan bill and its $550 billion in new spending would not only create jobs and fix crumbling infrastructure. It would also prevent power outages, help more people gain access to fast internet service, protect against wildfires and more.

On the other hand, signs of rising partisan friction were not hard to find.

Sen. Rob Portman (R-Ohio), another of the deal’s main architects, called the bill “a lasting achievement” that “will improve the lives of all Americans” − but still spent most of his floor speech on the legislation blasting reconciliation as a partisan “tax and spending extravaganza.”

Sen. Jerry Moran (R-Kan.), one of the original 11 Republicans to sign onto the bipartisan bill, voted against it in the end because it will add to the debt.

The House poses its own set of questions.

Speaker Nancy Pelosi has repeatedly said she won’t bring the infrastructure bill to a floor vote until the Senate also passes the reconciliation bill, a process that could take months. That bill would include other Democratic priorities such as climate change, child care, elder care and housing but is unlikely to significantly boost other transportation priorities already included in the bipartisan deal, despite some progressives’ wishes to the contrary.

The Senate is already getting the ball rolling on the reconciliation process, releasing a $3.5 trillion budget resolution on Monday that they hope to pass as soon as Thursday. The budget framework instructs a slew of committees to draft their pieces of the reconciliation proposal by Sept. 15.

Senate Majority Leader Chuck Schumer said Monday that the reconciliation bill “will do more to combat climate change than any legislation ever, ever in the history of the Senate.” Republicans, though, have slammed it as a “reckless tax and spending spree.”

The eventual reconciliation package will be able to pass the Senate with a simple-majority vote, so Democrats can move it without any GOP support. But all 50 Senate Democrats would need to vote for it, including party-bucking mavericks Sinema and Joe Manchin (D-W.Va.).

Complicating matters is the fact that the federal government’s existing transportation programs are due to expire at the end of September, just 10 days after both chambers of Congress are likely to be back in town at the same time. The infrastructure bill would renew those programs for five years — but lawmakers will probably need to pass a short-term extension first.

Lawmakers had hoped to avoid such an extension, as short-term funding patches make it hard for states to plan.

Still, Democrats are keeping their composure. At an appearance Monday with Transportation Secretary Pete Buttigieg in his home state of New Jersey, Rep. Tom Malinowski struck a confident tone.

He acknowledged the political hurdles and the complicating factor of the budget reconciliation bill, but said: “Basically, we have several planes up in the air, trying to come in for a landing in stormy weather, and we have air traffic controllers — our leadership in the House and the Senate — that are going to bring those planes down. I’m not sure what order, or exactly when, but I’m absolutely certain the House will pass this infrastructure bill.”

Passage of the bill follows months of bipartisan efforts that started almost immediately after Congress passed President Joe Biden’s top priority upon coming into office: a massive Covid relief bill. Attempts to negotiate with a group of Republicans headed up by Sen. Shelley Moore Capito of West Virginia collapsed in June, and a bipartisan group of moderates led by Portman and Sinema took up the mantle. The effort appeared to fall apart several times before the group finally came out with legislative text last week, overcame a series of procedural holdups and disagreements over amendments and timetables and managed to pass a bipartisan bill.

Theoretically, the House could decline to take up the bipartisan Senate bill as written and instead take it to a conference committee to be melded with a larger, more liberal surface transportation and water infrastructure bill sponsored by House Transportation Chair Peter DeFazio (D-Ore.). But White House officials have privately cautioned Democrats against going the conference route, saying they would risk delaying or blowing up the deal.

A leadership aide told POLITICO on Monday that “the House schedule remains fluid and conversations regarding the [bipartisan infrastructure bill] are ongoing.“