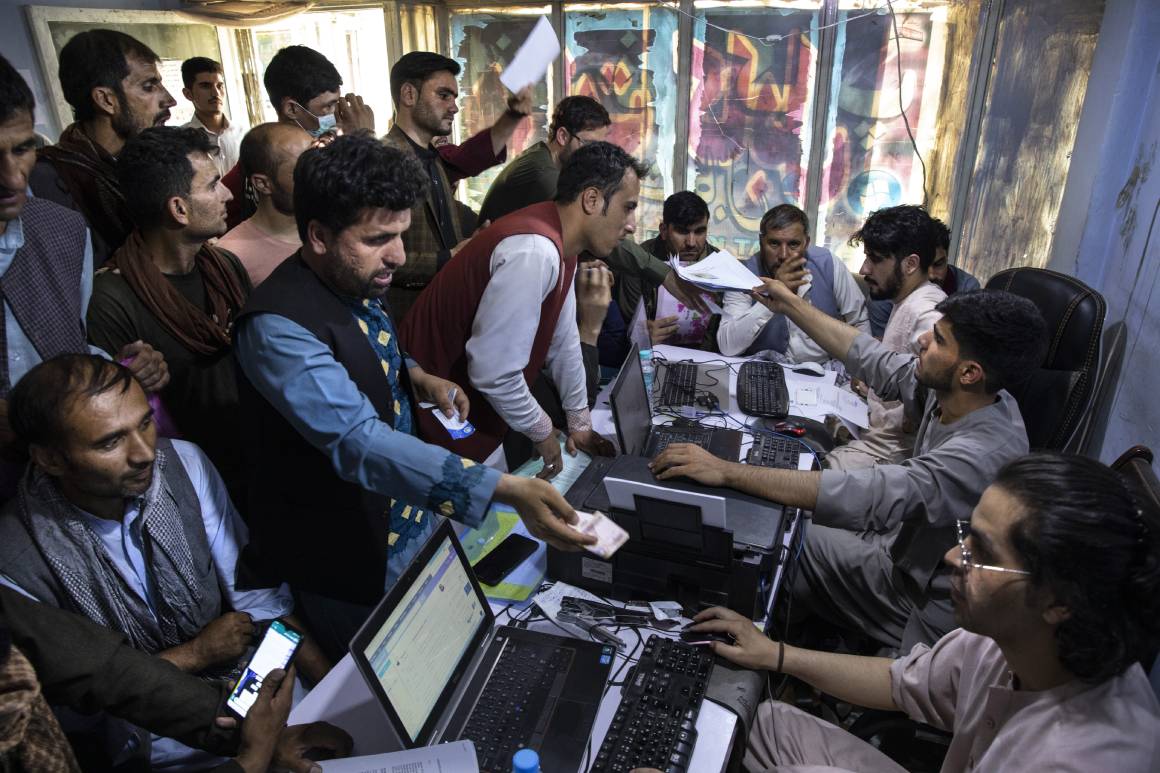 Silicon Valley pledged to collaborate to stop terrorists from taking advantage of social media. Now, the Taliban present a challenge like no other.

As the Taliban consolidate power in Afghanistan and reports of human rights violations rise, tech platforms’ channels for communicating on how to handle dangerous content and accounts are struggling to keep up.

The Global Internet Forum to Counter Terrorism — an industry group launched by Facebook, YouTube, Twitter and Microsoft “to prevent terrorists and violent extremists from exploiting digital platforms” — has not taken a position on whether to let the Taliban take over the Afghan government’s official social media handles or verify the accounts of its leaders, and how to address the regime’s communications on encrypted platforms like WhatsApp. Those calls, the coalition says, are best left to the platforms themselves.

Enforcement against Taliban-based content and accounts remains inconsistent across the major sites. Facebook banned the Taliban, but that hasn’t held up across its platforms. Google-owned YouTube has said it, too, will terminate Afghan Taliban accounts. But Twitter has not pledged to block them, stating only that it will take action on posts that violate platform rules.

Human rights experts and digital activists fear that as tech companies grapple with how to handle Taliban material amid the fast-evolving political situation in Afghanistan, inconsistent applications of their content rules could make matters worse — including by inadvertently blocking posts from other users that reveal human rights atrocities.

“But with the companies, we don’t see that happening fast enough right now. … They’re scrambling a bit,” he said.

“I don’t think people were fully ready for this to happen in Afghanistan — unlike Myanmar or elsewhere, where channels were open,” he added. “That’s not the case so far in Afghanistan. So what’s happening is that much more work is having to be done every hour on this.”

Michael Kleinman, director of Amnesty International’s Silicon Valley Initiative, called on the platforms to “ensure that crucial evidence of any past, ongoing, or future human rights abuses or violations of international humanitarian law, by any party, is preserved.”

Despite the stated bans, Taliban are entrenched on social media. They are regular users of most of the mainstream platforms, said Patricia Gossman, the Afghanistan lead for Human Rights Watch, adding that Facebook-owned WhatsApp in particular has been used to coordinate battles (as have Signal and Facebook Messenger, though to a lesser degree). Encryption on Facebook’s messaging service has made their accounts harder to detect, and some Taliban actors and groups appear online to be legitimate business organizations — another factor making them harder to recognize.

The rapidly evolving situation has also raised difficult questions about how the tech platforms handle accounts of violent extremist groups that seize the levers of government. The Taliban, which is notably not designated a foreign terrorist organization by the State Department, is now in charge in Afghanistan. (It is, however, on the Treasury Department’s specially designated nationals list, which includes terrorists and other groups that Americans are prohibited from dealing with.) And despite its propensity for propaganda, some of the Taliban’s recent public messaging has included calls for calm and pledges to respect women’s rights. This ambiguity has left the mainstream social platforms, like Facebook, in wait-and-see mode, looking to U.S. and global authorities like the United Nations to determine how to classify the Taliban.

There is also real worry that social media posts from citizens, activists or journalists shedding light on human rights abuses in Afghanistan will become collateral damage in platforms’ takedowns of Taliban content. Removal of such evidence in Myanmar and elsewhere has made it harder for civil society groups and investigators to hold perpetrators accountable, a high stakes problem as platforms lean increasingly on artificial intelligence to sift through content.

The tech industry’s anti-terror coalition is right now focused on sharing information with member companies to help them keep pace with developments in Afghanistan and online that will inform their own, respective content enforcement decisions. Taliban content “that glorifies terrorist acts, depicts graphic violence against defenseless people, contains imminent credible threats, or seeks to recruit or instruct followers for violence” may be added to a coalitionwide database where member platforms can share so-called “hashes” or “digital fingerprints” of terrorist images and videos, a forum spokesperson said. Despite projecting an air of calm, the Taliban have been inflaming the chaos at the airport in Kabul, shooting and harassing Afghan civilians trying to evacuate the country.

Facebook, Twitter and YouTube confirmed they have been in touch with the forum but did not share details on how they’re collaborating. Microsoft would not confirm whether it’s working with the coalition on this.

Also looming over the tech companies’ decisions is the very real possibility that the Taliban could block access to all the social networks — or shut down the internet altogether — in the coming days or weeks.

Pulling the plug on social media apps, or internet access altogether, would be easy for the Taliban, according Chima, of Access Now. All it would take would be a forceful takeover of telecom companies in Afghanistan, which have been targets of violent activity or extortion by the Taliban in the past. Such a blackout, he said, could take as little as two to three hours after seizing control.

An edict would be quickly followed, he argued. “If they issue orders, … they will get compliance more likely than not.”

Some close observers argue, however, that the group may be inclined to keep connectivity intact to project a degree of normalcy in the region — at least initially, especially if the Taliban themselves aren’t completely blocked.

“Whether they would impose more far-ranging restrictions is yet to be seen,” Gossman said of the Taliban. “They, of course, also use these platforms.”