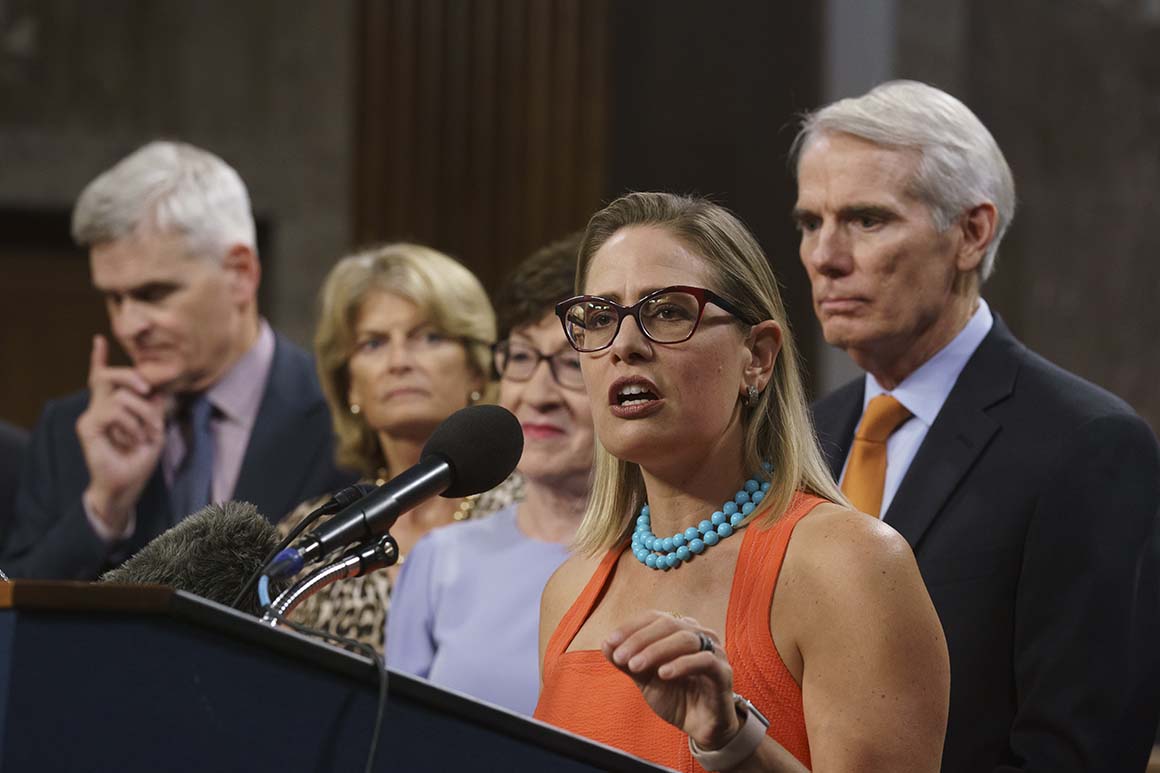 Kyrsten Sinema still opposes her party’s plans for a $3.5 trillion, party-line spending bill. And she’s not up for a negotiation about it.

As House Democratic leaders hold back Sinema’s own Senate-passed bipartisan infrastructure bill in order to push the Arizona Democrat and Sen. Joe Manchin (D-W.Va.) to support a multitrillion-dollar spending bill, Sinema is making it crystal clear that her mind can’t be changed. And that applies even as her own legislation becomes a bargaining chip in House Democrats’ internal discussions.

The $550 billion bipartisan infrastructure bill “is a historic win for our nation’s everyday families and employers and, like every proposal, should be considered on its own merits,” said Sinema spokesperson John LaBombard. “Proceedings in the U.S. House will have no impact on Kyrsten’s views about what is best for our country – including the fact that she will not support a budget reconciliation bill that costs $3.5 trillion.”

It’s the latest entrenched position from the first-term moderate, whose resistance to changing the Senate’s filibuster rules and to supporting a $3.5 trillion spending bill is enraging progressives. Sinema and Manchin both helped pass Democrats’ budget earlier this month, setting up that gargantuan spending bill, but both are resistant to a social spending package that ultimately meets its $3.5 trillion top line mark.

Sinema in particular specifically opposes that spending goal, which was devised by Senate Budget Chair Bernie Sanders (I-Vt.). Senate Democrats need all 50 of their members, including Manchin and Sinema, to pass a filibuster-proof reconciliation spending bill.

On Sunday Speaker Nancy Pelosi said her members were still pursuing a bill that costs $3.5 trillion, but are hoping to finance it in part with tax enforcement and tax increases on the wealthy and corporations. Meanwhile, moderates in Pelosi’s caucus are declining to back the Senate-passed budget unless Pelosi puts Sinema’s Senate-passed bipartisan infrastructure bill up for a vote on the House floor.

In statement shortly after Sinema’s, Manchin leaned on Pelosi and House leaders to act now on the $550 billion bipartisan infrastructure bill instead of waiting for the Senate to pass a massive spending bill.

“It would send a terrible message to the American people if this bipartisan bill is held hostage. I urge my colleagues in the House to move swiftly to get this once in a generation legislation to the President’s desk for his signature,” Manchin said.