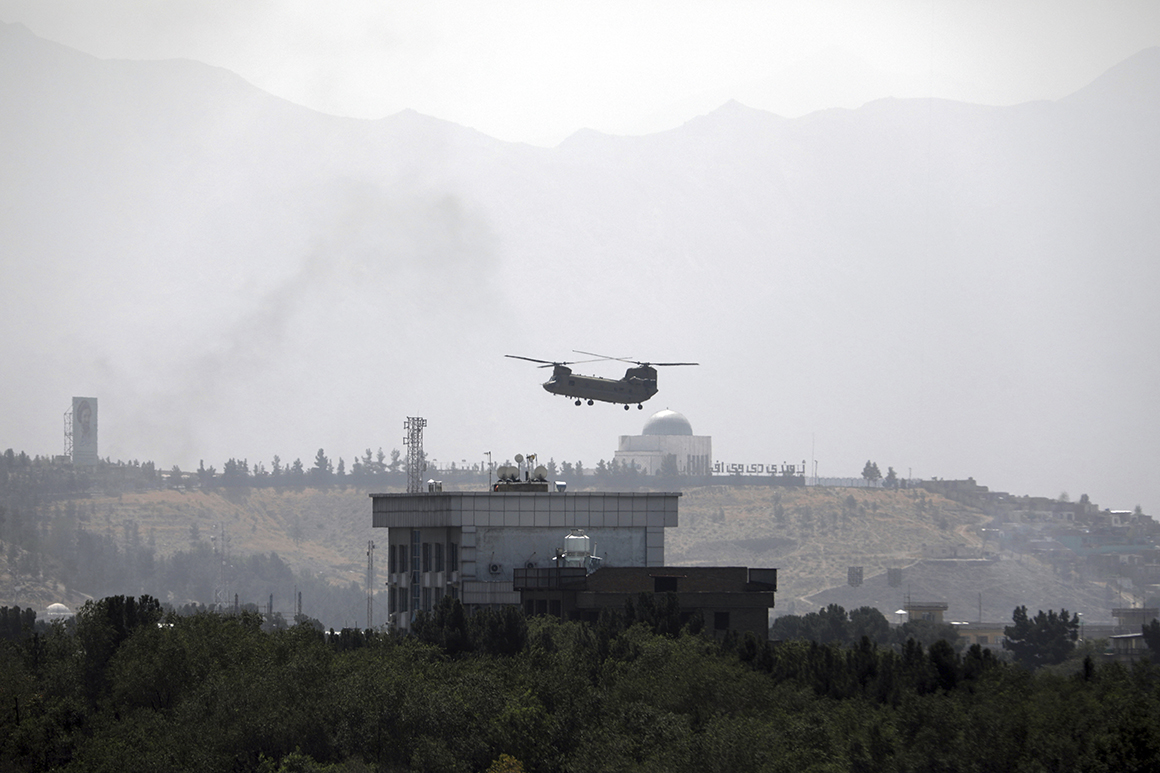 One of the most stunning guerrilla campaigns in history reached Afghanistan’s capital on Sunday, forcing the country’s president to flee as countries rushed troops to the airport to evacuate their citizens.

All U.S. Embassy staff in Kabul, including the mission’s top diplomat, were being evacuated to the international airport as the Taliban looming at the capital city’s gates urged the Afghan government to relinquish power on Sunday. Afghan officials confirmed that President Ashraf Ghani departed the country.

The embassy will likely be shuttered by Tuesday, two U.S. officials said, but certain staffers will continue their work from a compound at the airport protected by roughly 6,000 U.S. troops, who will shuttle between the embassy and the airport. Other U.S. diplomatic officials will board flights back to home. CNN first reported on the full evacuation.

U.S. officials on the ground had been in touch with Ghani aides about the possibility of turning Kabul over to a transition government in exchange for some length of military ceasefire, one of the officials said, but the swiftly moving developments in the Afghan capital might already have rendered those talks moot.

Black Hawks and Chinooks whisking staff from the mission dot Kabul’s sky as residents prepare for the Taliban’s takeover of the capital and country. In one instance, a shopkeeper painted over images of women the militants forbid.

“We are working to make sure that our personnel are safe and secure,” Secretary of State Antony Blinken told host Jonathan Karl on ABC’s “This Week.”

“We’re relocating the men and women of our embassy to a location at the airport. It’s why the president sent in a number of forces, to make sure that as we continue to draw down our diplomatic presence we do it in a safe and orderly fashion,” he said.

The Pentagon surged an additional 4,000 troops to the country to help with the State Department’s drawdown in recent days as the Taliban closed in on Kabul, bringing the total military presence on the ground to double the footprint when President Joe Biden took office. Though Biden warned the Taliban not to harm Americans, officials stress that the mission is strictly non-combat.

Roughly 3,000 personnel from two Marine Corps infantry battalions and one Army infantry battalion will be joining the 1,000 American troops already on the ground at the embassy and the airport, according to a defense official.

Biden on Saturday also approved Defense Secretary Lloyd Austin’s recommendation that the Pentagon send in the lead battalion of the 82nd Airborne Division for the mission — another roughly 1,000 troops, the official said. Austin on Sunday then authorized another 1,000 troops who were in Kuwait as a ready reserve to go to Kabul instead.

The stunning campaign by the Taliban to systematically take cities while closing in on the capital by isolating small pockets of government troops was clearly well-planned.

“They’ve been laying the groundwork for this for years, this isn’t like they just all of a sudden coalesced to storm through the country,” said Colin P. Clarke, director of policy and research at the Soufan Group.

But the insurgent group also used its own version of a strategy for taking and holding territory once championed by U.S. generals fighting the Taliban, he said. “It was almost like they were able to reverse-engineer what we used to call the oil spot strategy, taking territory, and then expanding out. They actually were able to implement that.” 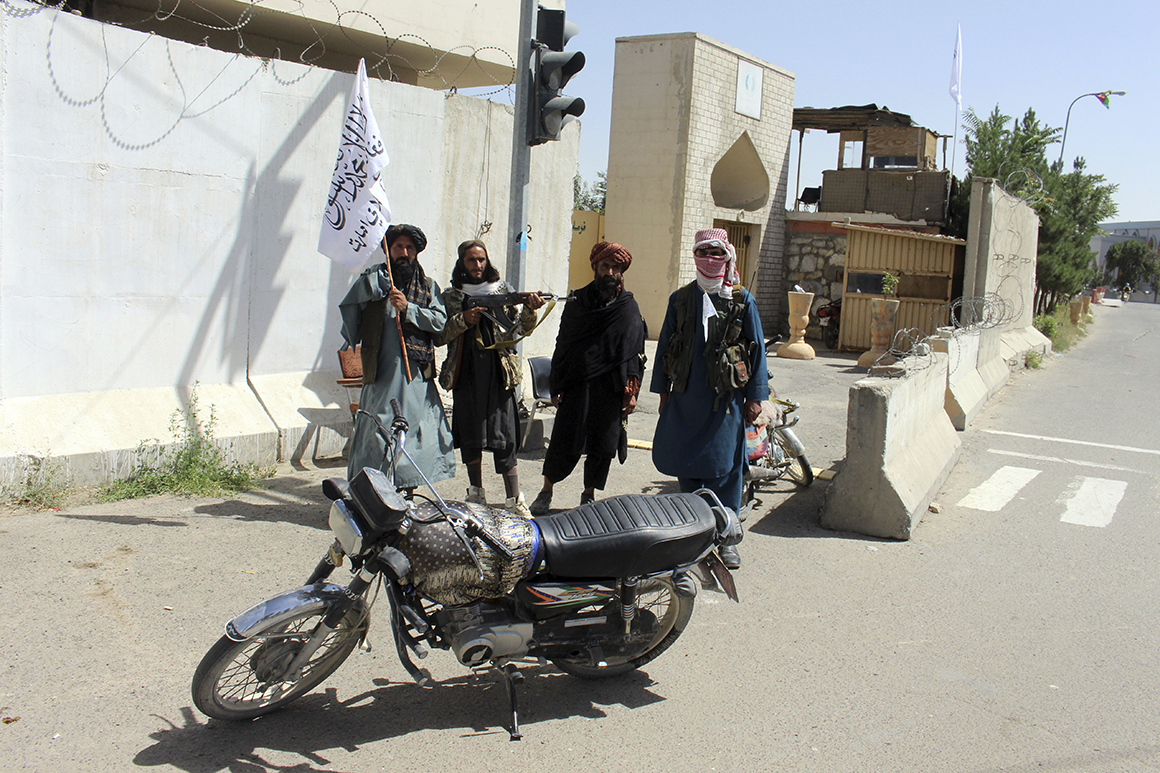 Images sent to POLITICO from would-be passengers show hundreds waiting outside the Kabul airport in 80-degree heat with no clear indication of when they will board a flight. Long lines of Afghans have formed outside embassies seeking visas.

“The capital city is in chaos,” one observer who asked to remain anonymous said.

Last month, Biden told reporters the world wouldn’t see images reminiscent of America’s rushed 1975 exit from Saigon. “The Taliban is not the North Vietnamese army. … There’s going to be no circumstance where you see people being lifted off the roof of a embassy in the — of the United States from Afghanistan. It is not at all comparable.”

But that’s not all the administration got wrong. No official or intelligence assessment expected the Taliban to sweep across Afghanistan in a matter of days, though most said the militants would assuredly take control of the country after U.S. and NATO troops departed the country.

And for months, humanitarian groups urging the administration to prioritize the evacuation of Afghans who served alongside American service members during the 20-year war had their calls and messages unreturned. A coalition of organizations sent multiple emails, shared with POLITICO, to the Afghanistan Task Force requesting a meeting “to ensure as many lives are saved as possible.”

It was only on Saturday night that the State Department reached out to those organizations requesting the names of Afghan visa applicants, journalists, and human rights activists who need imminent relocation. Their names will now be placed on a list compiled by a governmentwide coordination cell.

The Kabul embassy’s consular section also requested information on American citizens trying to flee Afghanistan. “The U.S. Embassy is exploring options for U.S. citizens who want to depart and who have not been able to find a seat on commercial flights,” according to a “sensitive but unclassified” email obtained by POLITICO. “Embassy is soliciting information from U.S. citizens who may wish to utilize such options.”

During a 45-minute call with senators on Sunday, a majority of lawmakers asked Secretary of State Antony Blinken about evacuations, according to a Senate aide.

Senators also asked about the possibility of terrorist activity and engagement with Pakistan, the aide said. The officials responded that more information about terrorist threats would be provided in a classified setting.

During the call with senators, Blinken walked through the pipeline for Special Immigrant Visas, according to an administration official. Blinken anticipated about 20,000 applicants and their families would be sent to the continental U.S. He added that the administration was looking for options outside the U.S. for individuals who still need to clear key hurdles in the visa application process.

There’s a greater sense of urgency for moving people out of the country now. The Taliban have entered Kabul, though the group issued a statement imploring militants not to attack the capital city. “Since the capital Kabul is a large and densely populated city, the Mujahideen of the Islamic Emirate do not intend to enter the city by force or war, but rather to enter peacefully through Kabul,” the spokesperson said.

Republicans have been scathing in their criticism of Biden’s handling of the U.S. withdrawal, though it was originally set in motion by his predecessor.

Rep. Liz Cheney (R-Wyo.) said Sunday that the Taliban’s rapid-fire military triumph in Afghanistan was a disaster that “did not have to happen.”

“This disaster, the catastrophe that we’re watching unfold right now across Afghanistan did not have to happen,” she said. “It’s not just that people predicted this would happen; everyone was warned that this would happen. We’ve now created a situation where as we get to the 20th anniversary of 9/11, we are surrendering Afghanistan to the terrorist organization that housed Al Qaeda when they plotted and planned the attacks against us.”

Earlier, when host Karl suggested that the images of helicopters airlifting American personnel recalled the panicked exodus from Saigon during the chaotic end to the Vietnam War in 1975, Blinken rejected the comparison.

“Let’s take a step back. This is manifestly not Saigon,” said Blinken, saying the invasion of Afghanistan in 2001 had succeeded in its primary goal, getting rid of Osama bin Laden and Al Qaeda in the aftermath of the Sept. 11 attacks.

“That message should ring out very strongly,” he added later.