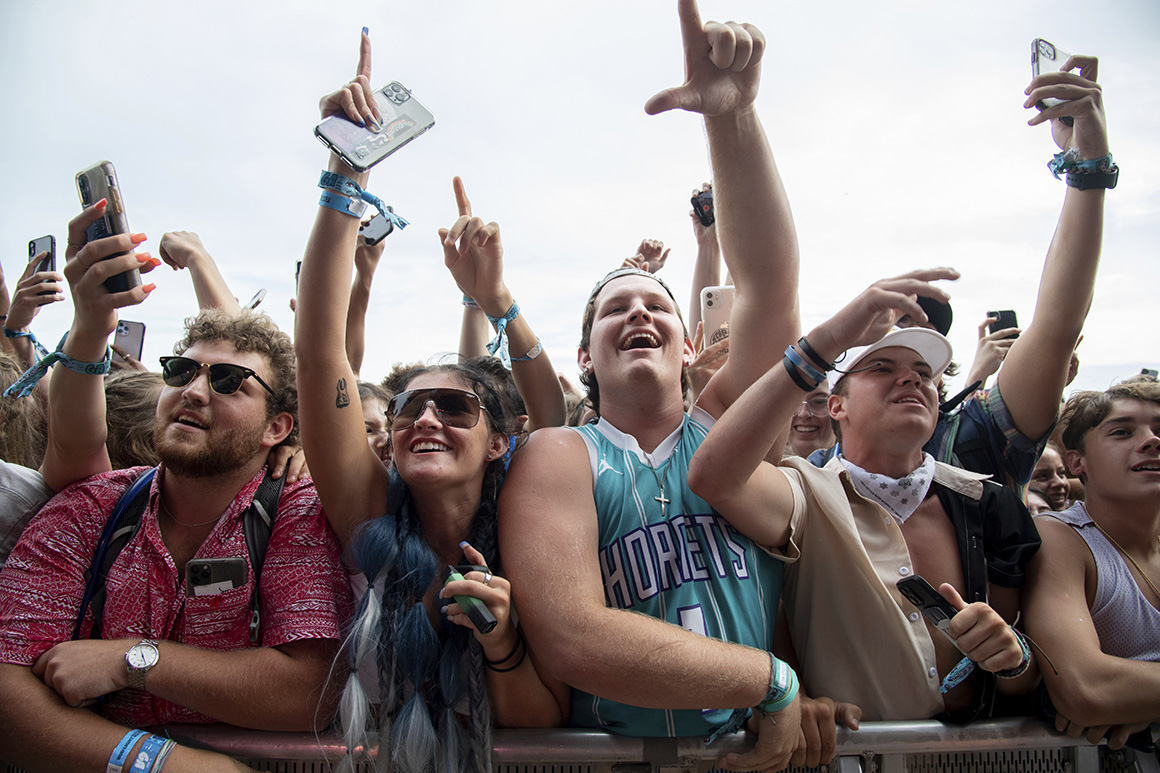 CHICAGO – A sea of maskless, sweaty, thrashing bodies filled Chicago’s Grant Park, pushing up against the performance stage as acts like Miley Cyrus screamed into the microphone.

Roughly 100,000 people a night poured into the four-day long Lollapalooza, one of the biggest music festivals in the world. But, as it happened this year, the festivities came at the same time that the White House was recalibrating its message on Covid-19, warning that vaccinated people who experienced rare, so-called breakthrough infections of the Delta variant could transmit the virus as readily as the un-immunized.

The warning was issued with a fair bit of alarm, including a sober address from President Joe Biden himself. But by that point, eager concert-goers were already flooding into the event.

Lollapalooza had been greenlighted weeks earlier, which city officials say was based on guidance from the Centers for Disease Control and Prevention and messaging from the White House. As a precaution, event organizers required those attending to show proof of vaccination or a negative Covid test from within the last 72 hours.

The festival is also held outside, which helps mitigate against transmission. But with hospitalizations up 35 percent, Cook County was added just this Thursday to the CDC’s areas experiencing “substantial” Covid spread. And with the administration having revised its mask guidance and with new revelations about the Delta variant, medical experts and some local politicians were already steeling themselves for the worst.

“This really has the possibility of being a super spreader event,” said Chicago Alderman Chris Taliaferro, a member of the city council’s Progressive Reform Caucus. “Unfortunately, we may possibly have to deal with the aftermath of this.”

The brewing anxiety in Chicago this past week underscored the extent to which the emergence of the Delta variant has disrupted the White House’s plans for the late summer and fall. A season meant to mark the great reopening of society has, instead, been darkened by the next chapter of the disease. And it has left the Biden administration at a crossroads: eager to tout a country making strides but divided internally over how to handle the threats posed by the new strand of virus and what steps Americans should take to protect themselves from it.

Top Biden officials note that breakthrough infections among the vaccinated are exceedingly rare, unlikely to be severe, and more likely to occur in crowded indoor settings. They’ve been openly frustrated by what they see as overly alarmed coverage of these cases.

Still, officials are increasingly worried about the ability of fully vaccinated individuals infected with Delta to spread it to others. There are also several lingering questions about Delta that the CDC is studying — including whether and how asymptomatic individuals can transmit the virus — raising questions about the risk posed by those choosing not to wear masks.

It all amounts to a grim political outlook for Biden. The White House had planned to be focused by now on the economy, jobs and infrastructure. Now, it is forced to confront questions about how schools would operate this fall on top of fear from housing advocates over the expiration of an eviction moratorium on Saturday, which came after the White House was slow to call for a legislative fix and which could, those advocates warn, further hamper the pandemic fight.

The situation was dire enough this past week that one longtime Democratic operative said Biden should consider issuing a formal address to the nation to more clearly lay out where the fight against the pandemic stands.

“Things are confusing right now,” said longtime party official Simon Rosenberg. “There is rancor and frustration in the air. School reopenings are going to be hard.”

Inside the administration, the emergence of the Delta variant has caused friction, leading to behind-the-scenes finger-pointing and weeks-long tensions between the CDC and the White House. Two senior Biden officials familiar with the matter said the administration is still trying to balance messaging in a way that underscores the severity of the Delta variant while simultaneously reiterating that vaccinated individuals are overwhelmingly not at risk.

“We thought we were going to move past this,” one senior administration official said. “It’s just like, here we go again.”

The revised mask mandate in particular has proved thorny. Officials in the White House and the Department of Health and Human Services questioned whether recommending Americans wear masks again would help with the pandemic fight, with some officials in meetings over the last week arguing that reversing guidelines could confuse people and spark political backlash.

Armed with analysis from within her department, CDC Director Rochelle Walensky argued otherwise. She lobbied Biden officials, including Biden’s Chief Medical Officer Anthony Fauci, to issue new recommendations urging fully vaccinated Americans to wear masks indoors, citing more recent data on the spread of the Delta variant, and virus levels in vaccinated and unvaccinated people. According to two senior officials familiar with the conversations, Walensky insisted that doing nothing wasn’t an option.

While Walensky has the backing of the president and other senior officials such as Fauci, both her office and the White House have privately expressed frustration with one another.

Those frustrations surfaced again when senior White House and health officials argued over data related to an outbreak of hundreds of vaccinated and unvaccinated individuals in Cape Cod. Though only a handful of those who were immunized and still got infected ended up in the hospital, the infection numbers among the immunized was alarming. Still, officials went back and forth on whether the administration had gathered enough data about asymptomatic spread of the Delta variant to call on Americans to wear masks indoors again and if Americans would adhere to the new guidelines.

The administration eventually did revise the mask guidance, calling for vaccinated individuals to wear face coverings indoors when in areas of high virus transmission. But internally there are concerns about how the new posture will work.

“We declared ourselves to be somewhat successful when we were able to say vaccinated people don’t have to mask,” one administration official said. “It’s hard to seem like we’re going back.”

Federal officials who spoke to POLITICO emphasized that the Biden team always knew that they would have to alter their approach as the Covid fight changed and new variants emerged. A senior administration official noted that analyzing real time data on the trajectory of an ever-evolving virus, then developing appropriate public health recommendations for over 330 million people, is not an easy task.

While officials conceded that there had been internal tensions, they also portrayed it as a once-in-a-generation pandemic and said that Americans expected and deserved a government that led with data and science. The White House has been heartened this past week by the uptick in vaccination rates among the unvaccinated (it was the nation’s strongest in first-shot vaccinations since early June), believing that their messaging is breaking through. More progress may soon come as businesses and the federal government implement mandates or quasi-mandates for their workforces to get vaccinated.

Still, it’s a far cry from May, when Biden had signaled an end to mask-wearing among those vaccinated, and all but declared victory over Covid on the Fourth of July. And the question now confronting the White House is whether they can ever go back, or whether too much of the country—not just the red states but the blue cities too—is too ready to live life as if the pandemic had passed.

In Chicago, Taliaferro said if he knew then what he knows now about Covid — the rapid spread of the Delta variant, the possibility of breakthrough infections and the ability for those who are vaccinated to still spread the disease – the City Council would have taken a different approach.

“There were a lot of factors that were not prevalent at the time,” the alderman continued. “We saw us transitioning almost out of a pandemic.”

At a news conference last week, when asked if Lollapalooza had the potential to be a superspreader event, Chicago’s health commissioner, Dr. Allison Arwady said she thought the city was being more responsible than other large gatherings across the country.

Not everyone holds that view.

Dr. Tina Tan, an infectious disease expert from Northwestern’s Feinberg School of Medicine, in a statement on Lollapalooza, said, “It’s a recipe for disaster.”