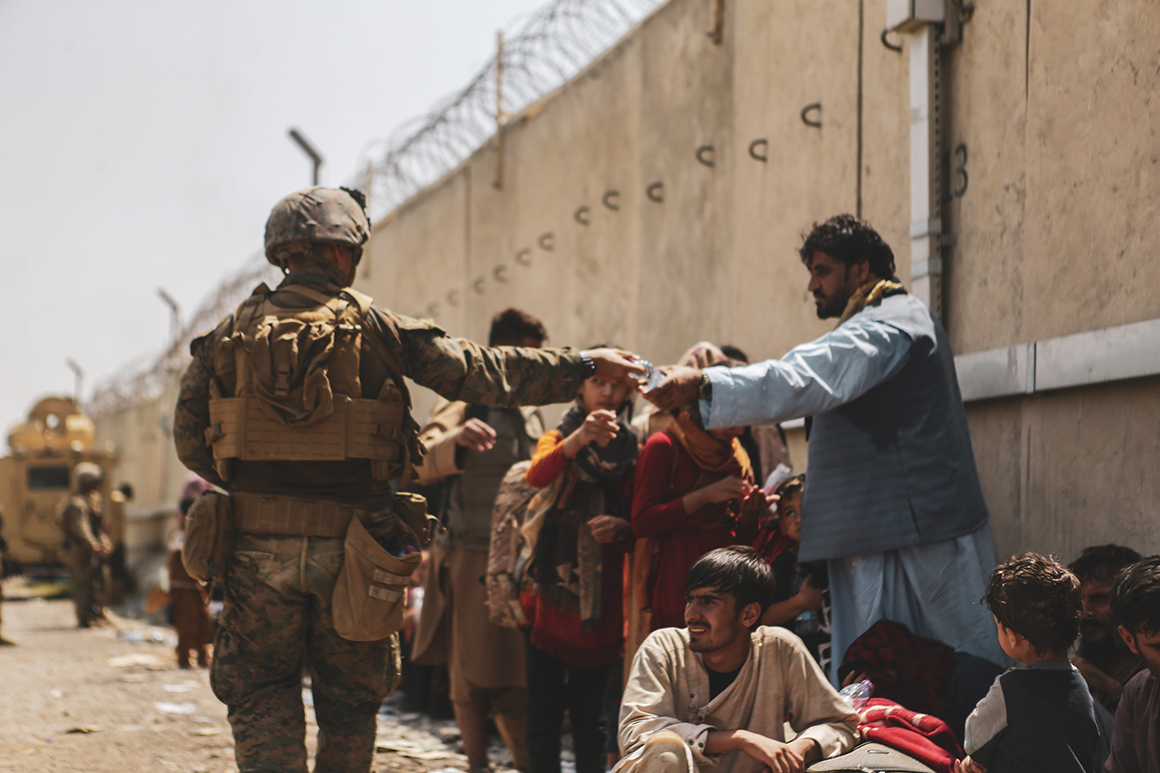 Tens of thousands of Afghans awaiting U.S. visas and thousands of American citizens are still stuck in Kabul, unable to find safe passage through frantic crowds, Taliban checkpoints and Afghan guards stationed outside the airport.

Gunfire erupted outside of the north gate of Hamid Karzai International Airport on Monday, killing a number of Afghan security forces. American officials have repeatedly had to close the gates for extended periods, leading guards to turn away even U.S. passport holders.

Multiple sources point to deteriorating conditions inside the airport, including lack of power and sanitation. And tension has emerged between American troops on the ground and State Department officials trying to extract U.S. citizens and Afghan allies.

Meanwhile, the West Wing is looking increasingly disconnected from reality as the Biden White House strives to project a sense of calm competence — even as the Taliban tighten their grip on Afghanistan.

“We are actually overperforming in terms of the evacuation numbers,” national security adviser Jake Sullivan told reporters on Monday of the massive evacuation effort underway at Kabul airport to extract thousands of Americans and tens of thousands of Afghan allies from the city.

“If you look at what we’re doing now and taking — evacuating thousands of people every day, it really has been a tremendous piece of work,” Defense Secretary Lloyd Austin told ABC’s “This Week” on Sunday.

While the evacuation has significantly ramped up in recent days, the reality on the ground belies the narrative that the situation is under control. The scenes around Kabul airport have been marked by violence, disorganization, bureaucratic in-fighting and delays, according to video and text exchanges viewed by POLITICO.

The result is an administration that appears increasingly out of touch, as reports from Kabul continue to reflect a chaotic evacuation.

“I don’t think the president’s rhetoric matches the conditions on the ground,” said Jenna Ben-Yehuda, a 12-year veteran of the Bush and Obama State Department and president of the Truman Center, which is coordinating with other groups to try to evacuate Afghan allies. 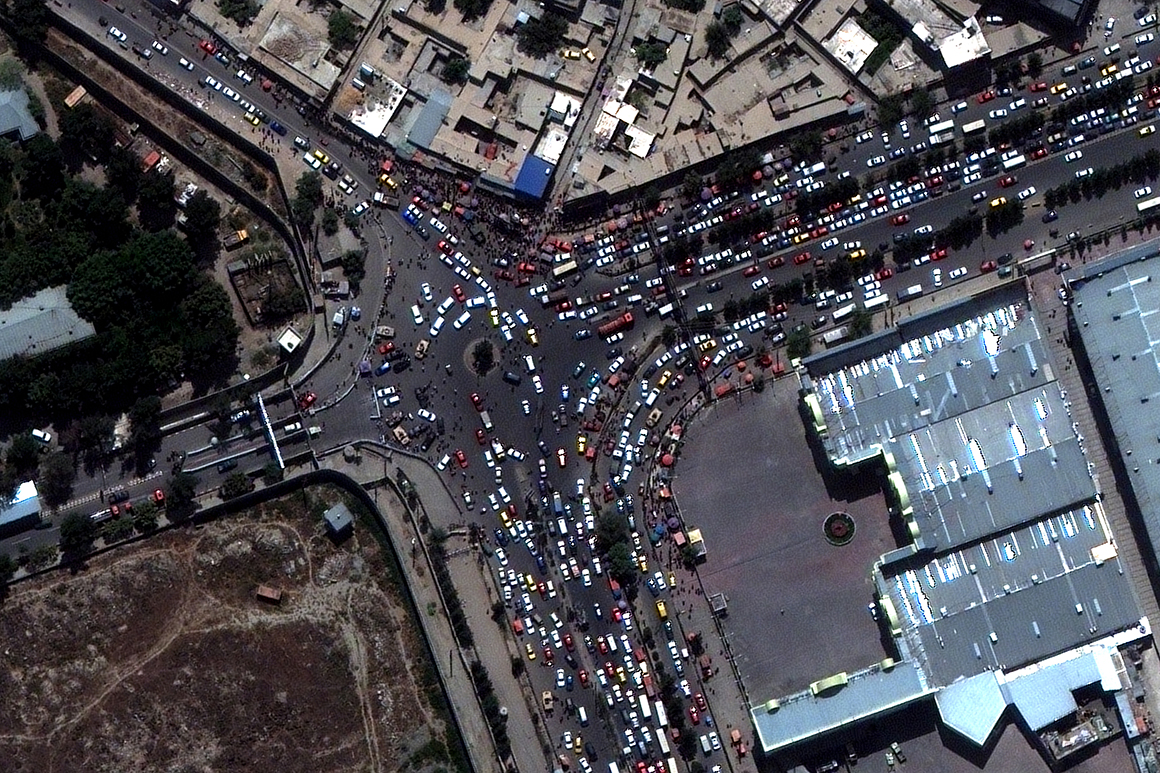 “They keep saying this was inevitable, but there absolutely was a way to avoid this — if that’s not the definition of gaslighting I don’t what is,” said Chris Purdy, the project manager of the Veterans for American Ideals program at Human Rights First, which has been part of the coalition to help evacuate people from Afghanistan.

In order to speed the evacuation effort, defense officials in recent days proposed retaking Bagram airbase, the military’s main hub for the American war effort until it was handed over to the Afghans in July as part of the withdrawal. Using Bagram as an additional location for flights out of the country would help ease the backlog at Kabul, some argued. But the proposal was nixed because the White House and some Pentagon officials worried it would require deploying a large number of additional forces and could spark a conflict with the Taliban.

“It was discussed, but [was] not a good option,” said one senior defense official. “Bagram would have been an airborne assault. Just a huge operation. Would have looked like a re-invasion.”

Eric Pahon, a Pentagon spokesperson, said Bagram was never considered as the “primary” evacuation site “due to its remote location” relative to “the vast majority of evacuees” in Kabul, some 40 miles away. He added that reopening Bagram was not “seriously considered as a required secondary site either.”

White House officials said Tuesday that the American effort had successfully evacuated 58,700 people from Kabul since the operation began, including 21,600 in the past 24 hours. The Pentagon has also acknowledged conducting limited rescue operations within the city to bring Americans into the airport, including two helicopter evacuations in the past week, and at times sent troops over the wire to support the effort.

But officials are running up against an Aug. 31 deadline to withdraw all American troops from the country — and the Taliban said Sunday that they would not agree to extend that deadline.

Already there have been reports of violence against Americans by the group, which is manning checkpoints outside the airport. Austin, the defense secretary, acknowledged in a phone call with lawmakers on Friday reports of Americans being beaten by Taliban members, saying the administration had relayed to Taliban leadership that such behavior was “unacceptable.”

American officials have held high-level meetings with the Taliban in recent days to discuss security at the airport. CIA Director William Burns met in secret with the Taliban’s de facto leader, Abdul Ghani Baradar, in Kabul on Monday, The Washington Post reported.

The situation is becoming increasingly dire for those who have not yet been able to get out. American citizens are routinely being turned away by Afghan guards at the airport despite showing U.S. passports, according to five sources familiar with the situation. In one instance, a guard told a group to leave the area or he would shoot them. In another, an Afghan interpreter and his family were beaten by Afghan guards after being rejected at the gates, and are now sleeping in their car because the Taliban burned down their house.

One video provided to POLITICO showed citizens holding blue U.S. passports who were stuck outside the gates, with a soldier of unknown nationality watching from the wall. They shared the video with the media through an intermediary because they wanted to raise awareness of the difference between the rhetoric and reality.

Americans and Afghan allies are having so much trouble getting into the airport that informal groups comprising people in Kabul, congressional staffers, military veterans and even citizens across America have cropped up to help coordinate meeting points and “snatch and grabs,” where U.S. troops briefly open the gates to bring in a small group of people.

While the administration tries to take credit for top-line evacuation numbers, many outsiders — veterans, diplomats, NGOs and others — have been frantically coordinating to help American citizens and Afghan allies escape because the normal channels are chaotic. One such group of veterans has taken to calling themselves “digital Dunkirk” or “Task Force Dunkirk,” referring to the mass evacuation of allied troops from France in 1940.

“We are having to come up with alternatives to get people in,” said Mick Mulroy, a former defense official and CIA officer and Dunkirk member. “The sheer masses of people are making it very difficult.”

Members of these informal groups and the soldiers in the airport they are working with are increasingly frustrated by the bureaucracy and lack of support from the State Department. One person involved in the efforts shared screenshots of a chat with a soldier who expressed anger with State officials interfering at the last minute.

“They’re f—ing changing up everything because they decided to show up for the first time,” the soldier texted, after State officials changed the location for processing American citizens at the last minute.

A U.S. official acknowledged that at times the gates are closed because the airport is at capacity. Military commanders have been directed to still accept U.S. passport holders. However, the American citizens will be directed to an open gate “and there may be a delay if it is necessary to provide additional force protection at that gate to safely recover the individual during periods when the gate may be crowded.”

Meanwhile, the U.S. must still coordinate directly with the Taliban to keep the perimeter as calm as possible. One U.S. defense official said Taliban commanders are occasionally welcomed inside the airport to make plans directly with U.S. military personnel.

The situation is “absolutely requiring of us to keep these lines of communication with the Taliban open,” Pentagon spokesperson John Kirby told reporters Monday, adding that the Taliban run checkpoints outside the airport. “This deconfliction has worked well in terms of allowing access inflow to continue as well as reducing the overall size of the crowds just outside the airport.”

While some experts argue that closing Bagram was a strategic mistake that partially led to the current backlog at the Kabul airport, analysts are split on the issue. Jonathan Schroden, an expert on the Afghanistan war at the CNA think tank in Arlington, Va., agrees with the Biden administration’s decision.

“The Taliban would have viewed staying at Bagram as a violation of the U.S.-Taliban deal and may have sought to attack us there had we stayed,” he said. “Highly doubtful we could’ve sold that as part of our ‘diplomatic presence.’”

What’s more, officials and analysts agree, the U.S. would have needed thousands of additional troops to retake the base and then secure it.

Schroden estimated it would take up to 1,500 troops alongside foreign forces to secure both the airport and the base, and even then, the U.S. would find it hard to protect both facilities. “At which point you’d probably be seeing the same scenes we’re seeing now at two separate locations,” Schroden said.

But Bill Roggio of the Foundation for Defense of Democracies called the closure “a major mistake” because the U.S. left its primary “evacuation point in a city with 4.5 million civilians flooded with an untold number of people fleeing the Taliban.”

Asked about the proposal to retake Bagram after Kabul fell, the National Security Council pointed to Sullivan’s comments on “Meet The Press” Sunday in response to a question about why the U.S. abandoned Bagram instead of trying to hold it. The “best military advice” the White House received was that Bagram would be “difficult to secure over time and put our troops at risk,” Sullivan said.

He added that “it didn’t logistically make sense from an evacuation perspective because it is located outside of Kabul. And both American diplomats, American citizens, and most of the Afghans at risk lived inside of Kabul.”

But former officials said that characterization is not accurate, and that tens of thousands of Afghans are still spread all over the country. Marc Polymeropoulos, a former senior CIA officer, said that dispersal makes the Aug. 31 deadline “almost impossible to meet” in terms of evacuating Afghan allies.

Analysts will continue to watch the administration’s handling and judge its overall performance. “I think the question of competence comes down to two things: Why wasn’t a quick Taliban takeover anticipated, and planned for accordingly, and it also comes down to successful completion of the evacuation effort,” said Madiha Afzal, a fellow at the Brookings Institution.

“I’m sure the former will be debated for a while, and the latter is still something the administration is actively working on,” she said.