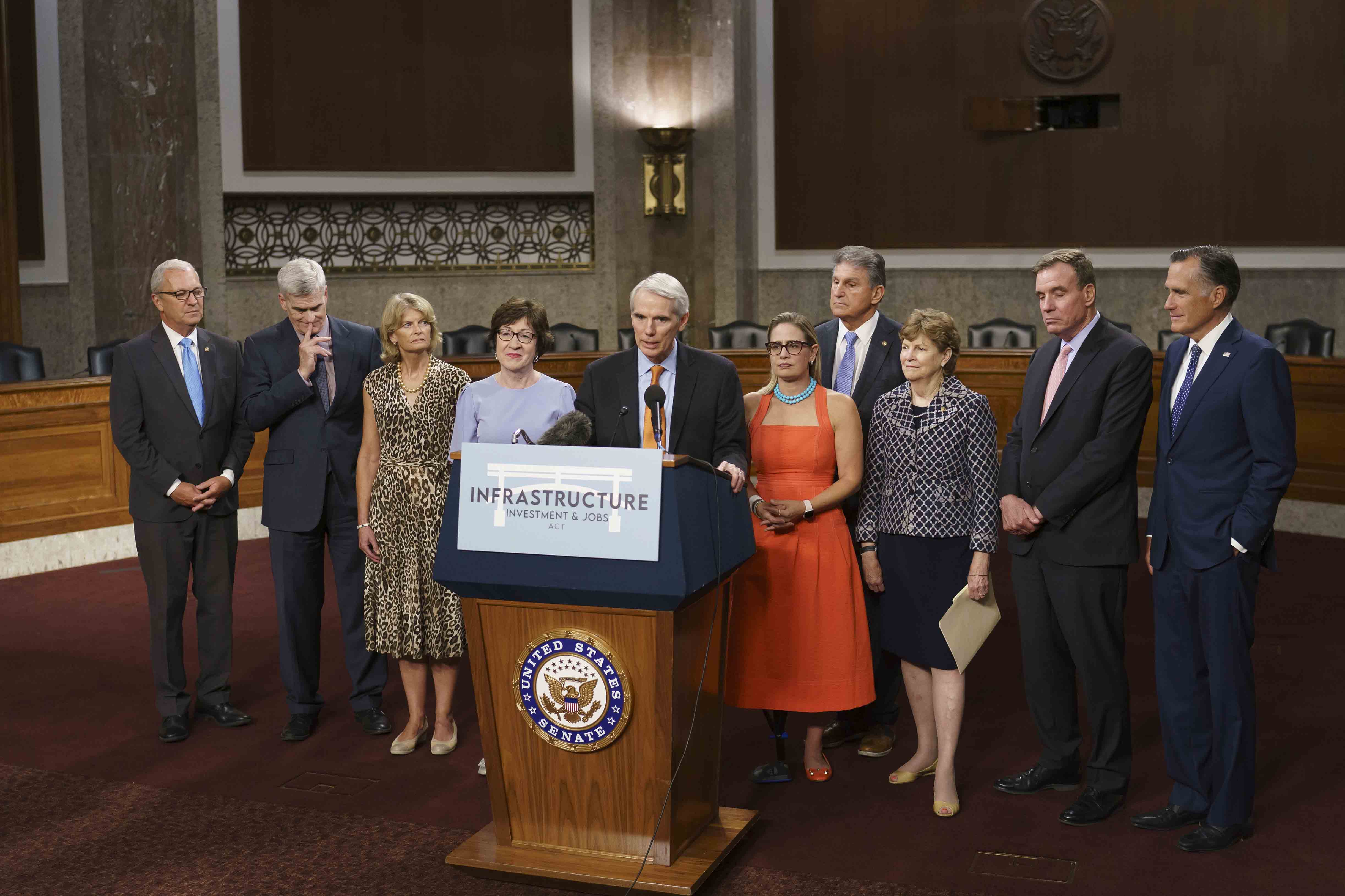 The Senate’s most successful bipartisan gang in years is undergoing a final rite of passage: protection of the infrastructure bill at all costs.

The ten senators who negotiated the physical infrastructure deal are vowing to collectively block any effort that would endanger the bill’s odds of reaching President Joe Biden’s desk. The chamber is kicking off a lengthy debate on proposed amendments to the gang’s work, which would spend $550 billion in new spending on roads, bridges, broadband and climate resiliency.

Senators often try to attach amendments containing their pet priorities to bills that have a strong chance of presidential approval — but that process can scuttle carefully crafted agreements. This time, the 10 senators who directly negotiated the bill have forged a pact to make sure that doesn’t happen.

Ohio Sen. Rob Portman, the lead GOP negotiator, predicted that “if there are any dilatory amendments, we’ll stick together.” And Sen. Mark Warner (D-Va.) said the group is “committed to doing whatever it takes.”

“There is an agreement to stave off bad amendments,” added Sen. Jon Tester of Montana, another Democratic negotiator. “We will lock arms and do that if necessary.”

The coming days amount to the last major test for the so-called G-22 gang, a group large enough to ensure that troublesome alterations to the bill can be warded off in the evenly split Senate. While the upper chamber’s leaders and negotiators call for a robust amendment process, the bipartisan alliance is also telegraphing that it would fight off any amendments significant enough to torpedo weeks of negotiation.

Sens. Tom Carper (D-Del.) and Shelley Moore Capito (R-W.Va.), their parties’ top members on the Environment and Public Works Committee, will manage the amendment process on the floor.

“I think the bipartisan G-22 is going to vote en bloc,” Capito said. “It’s going to be hard to make a serious play on a poison pill amendment.”

The amendment process gives senators who did not participate in writing the 2,700-page bill the opportunity to supplement the final text that the group released Sunday evening. Thus far, the Senate has adopted a handful of amendments by substantial margins that affected telecom workers and expanded renovations to Indian Health buildings. Meanwhile, Democrats blocked an amendment that would have prohibited funds for building codes that phase out the use of natural gas.

Occasionally, controversial Senate amendment requests drown out consensus on a popular bill with their own drama. For example, Republicans in the past have tried to attach a contraception amendment to a highway bill and an Obamacare amendment to an energy efficiency bill.

The infrastructure group’s plan to stay united and fight off poison pill amendments is similar to an effort mounted by 2013’s immigration klatsch, known as the Gang of Eight. That gang said at the time it was open to changing the immigration reform bill but would oppose en bloc any proposal that would kill the underlying compromise.

Sen. Susan Collins (R-Maine) said the G-22 gang would see amendments that strike at the core of the bill — such as gutting the broadband title — as similar threats to today’s infrastructure bill.

“We’re speaking and talking to each other because we all want to make sure that [there are] no poison pills that would affect the passage of the bill eventually,” said Sen. Mitt Romney (R-Utah), another negotiator. “We haven’t really had anything of that nature that we’ve had to worry about so far.”

Conservative angst is growing over the bipartisan infrastructure plan as President Joe Biden nears a victory on a bill he pushed for. But even detractors acknowledge that any effort at changing the bill to their liking will be a challenge, given the 60-vote threshold. And some are holding their fire for Democrats’ $3.5 trillion social spending package, which is scheduled for a preliminary budget vote in the coming days and would offer an unlimited amendment process.

“The main action on amendments will be in the budget reconciliation, not here,” said Sen. Mike Braun (R-Ind.), who does not support the physical infrastructure deal and raised concerns about the process. “I like to cut to the chase and do things that make sense. Not belabor for the sake of belaboring.”

Senate Majority Leader Chuck Schumer and Senate Minority Leader Mitch McConnell have yet to announce a broader agreement on amendments to the infrastructure measure. McConnell must balance his own support for the effort with the majority of his members who dislike the bill and want to change it.

Any amendments that would attempt to fundamentally overhaul the bill are more likely to come from Republicans. A total of 18 GOP senators, including one who missed previous votes on the deal, have endorsed moving forward, in addition to all 50 Senate Democrats.

Many Senate Republicans still have concerns about the legislation’s financing and want to see the nonpartisan Congressional Budget Office’s score on the bill’s cost versus revenue raised before making a final decision.

Democrats will move to wind the amendment process down as soon as it’s clear that at least 10 Senate Republicans are satisfied with the process and can overcome a filibuster. Even though 67 senators supported advancing the legislation last week, several GOP members indicated that they still had to make a final decision on how they’d vote in the end.

Sen. Jerry Moran (R-Kan.), who initially signed onto the bipartisan effort but voted against starting the process last week, said Monday that he had yet to make a final decision on whether he’d support the final package.

The coming days are a final homestretch for the bipartisan group, which announced an agreement with the White House in June but took more than a month to translate it into legislative text. Despite many ups and downs, the core group of senators stuck together with their effort throughout several near-disastrous stumbles.

For them, the finish line is in sight.

“We have spent more hours together than is legal in 14 states,” Warner said. “This is an agonizing last 72 hours.”