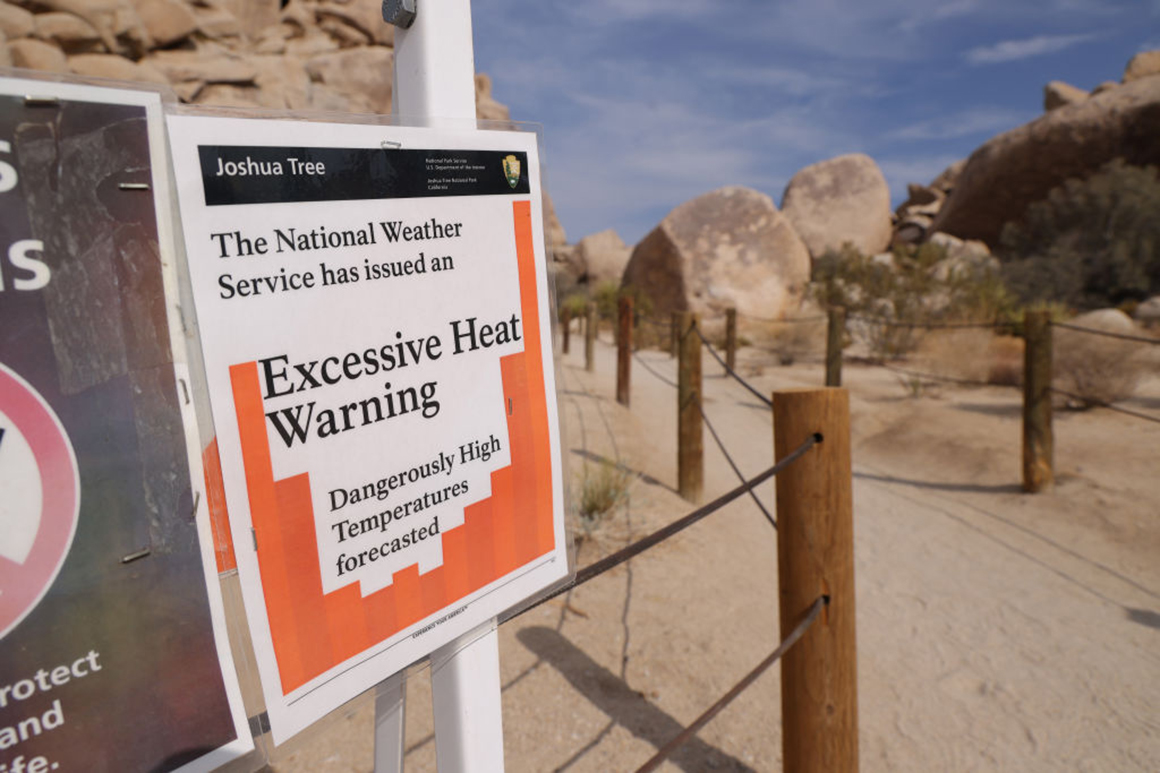 Congress is preparing to order the biggest U.S. investment in history for fighting climate change — hundreds of billions of dollars to clean up the power grid, fortify ecosystems and wean American drivers off fossil fuels.

But scientists say it won’t be nearly enough.

The latest warning is set to arrive Monday from the United Nation’s premier climate science panel, whose findings land as wildfires ravage the West, droughts squeeze U.S. farmers, and heatwaves force power companies to ration supplies — and portend even more calamitous events in the coming decades. The document will be the sixth major report from the Intergovernmental Panel on Climate Change, a group consisting of the world’s leading climate scientists.

Lawmakers pushing for an aggressive climate offensive hope the report will finally jolt some action out of Washington. Democrats have managed to include some climate measures in the Senate’s $550 billion infrastructure compromise bill in the Senate and are calling for more sweeping efforts in their expected $3.5 trillion reconciliation package.

“This is why I’m anxious to see the IPCC report,” Rep. Judy Chu (D-Calif.) said in an interview. “It seems as though it may point to tipping point disasters that could warn that we have far less time than previously thought.”

Chu added, “I do not think that Washington, D.C. as a whole understands the implications for not investing in climate change measures right this minute.”

Previous IPCC assessments have eliminated many of the scientific uncertainties that skeptical politicians clung to when rejecting policies that came with high price tags and threatened to disrupted the oil, gas and coal industries. Now, the scientists’ focus is on how fast — not if — the disastrous changes to the Earth’s climate will occur, how people will adapt to them and how governments can ease the worst impacts.

Aiding that research is a new field of science that seeks to connect global climate trends to tangible real-world impacts, which is expected to feature in Monday’s IPCC report. Scientists who were once wary of tying specific weather disasters to climate change are growing more confident about linking the growing frequency of events to warming temperatures — offering more precise guidance for the policy makers and legislators.

Both Democratic and Republican lawmakers say they are concerned about climate change. But advocates for strong policy action acknowledge the political window is rapidly closing as the Senate and House gear up for elections in 2022, when campaigning is likely to overshadow any serious legislative work.

Even before electioneering chokes off debate, the Biden administration is hoping to land a signature legislative climate victory to take with it to November’s international climate talks in Glasgow, Scotland, as evidence of U.S. commitment on climate change .

So far, aside from big promises and executive actions, President Joe Biden has little to show to make the case that the U.S. can lead the global efforts. Activists complain the bipartisan infrastructure plan heading for an expected vote in the Senate would spend too little on climate. That would make the envisioned $3.5 trillion Democrats-only reconciliation plan the last, best shot — if the party can persuade skeptical centrists to support it.

“I actually think we’re on the verge of a tipping point where we’re really jumping in and hopefully, over the course of this month, we set the president up to go to Glasgow and show progress and say, ‘All right, all of us now have to make bigger, more substantive commitments,’” Sen. Martin Heinrich (D-N.M.) said. “It’s the most important chance we have.”

The bipartisan infrastructure plan won’t be anywhere close to enough to counter the climate threat, according to scientists and Democratic lawmakers. And though it represents a major win for Biden on the domestic stage, passing only that legislation without the larger $3.5 trillion package would leave the U.S. in a weak position to cajole other countries like China and India to strengthen their climate efforts.

While the Senate infrastructure bill would devote tens of billions of dollars to coastal resilience, wildfire management, clean hydrogen, carbon capture and battery research, it would provide only a fraction of what Biden initially proposed to spend on installing a network of electric vehicle charging stations. Instead, critics say, it would expand highways that studies show encourage more driving.

Even with the down payment that Congress is making on Biden’s plans to aggressively shrink carbon emissions from power plants and tailpipes, the IPCC report is likely to call for ever-more stringent cuts to keep the planet temperatures from rising 1.5 degrees Celsius above pre-Industrial Revolution levels. Such a cap was the most ambitious target of the 2015 Paris Climate Agreement.

The Earth’s atmosphere is operating on a carbon budget with very little headroom left before the world would cross that 1.5-degree threshold, a level that’s likely to imperil many low-lying island nations. Doing so would lock in sea-level rises and contribute to feed-back loops that make it harder to stem further temperature increases.

Even leaders who crafted the Paris Climate Agreement acknowledged individual nations will need to speed their efforts to eliminate greenhouse gas emissions if they even want to avoid breaching the deal’s less-stringent 2 degrees target.

Based on current government targets, the world is on pace to see temperatures climb 3 degrees Celsius by the end of the century. The world already has warmed 1.2 degrees Celsius since the Industrial Revolution.

But the chasm between strategies of the progressives and moderates inside the Democratic Party for dealing with the problem is putting its thin majority and the Biden administration in a bind, with Sen. Kyrsten Sinema (D-Ariz.) the latest lawmaker to express her opposition to the framework.

Sinema’s resistance to passing a package as large as $3.5 trillion has prompted a backlash from progressives, who worry that the party’s moderates may squander the opportunity if they allow a single lawmaker to dictate the terms of the package.

“I just don’t subscribe to a reality where she makes all the decisions,” Rep. Jared Huffman (D-Calif.) said. Sinema’s office did not reply to a request for comment.

Though the infrastructure plan drew support from moderate Republicans who have been seen as amenable to modest steps to combat climate action, the more aggressive action under consideration in the much larger bill — like a clean energy standard that squeezes fossil fuels — aren’t expected to win any GOP members.

That type of shove-it-down-your-throats, unilateral climate offensive is less likely to be durable if Republicans return to power, said Corey Schrodt, legislative affairs manager with the nonpartisan think tank Niskanen Center. While he said more aggressive action on climate is needed, Schrodt praised the bipartisan infrastructure deal for its climate provisions.

But progressives derided it as too weak. Trying to appease Democratic moderates while attracting Republican votes has shackled the responses to climate change they’ve called for, leaving the U.S. and world short of necessary steps to rein in emissions, said Lauren Maunus, advocacy director with the youth-led progressive environmental group Sunrise Movement.

“There’s still this stick of ‘We need to hold on to bipartisanship in order to govern,’ even though that is completely out of touch with the majority of the American public that voted for Biden and support mostly Democratic policies,” she said. “There’s just a sort of gap in the logical scientific understanding of what’s actually required to stave off the worst of the climate crisis. And we’re talking about the worst — what we’re dealing with now is far from the worst.”

But Tony Leiserowitz, director of the Yale Project on Climate Communication, disputed progressives’ notion that Republicans would hesitate to reverse Democratic-only climate legislation if they return to power. Progressives cite broad public support for climate action, but Leiserowitz said that’s not “a sophisticated look at the polling.”

Opposition from conservatives for climate action remains strong, he said, and it’s only the rising support from liberal Democrats and growing interest from independents that almost entirely explains climate change’s ascension among national priorities. Republican sentiment has remained low and flat for more than a decade, Leiserowitz said.

And yet, bipartisanship might also relegate the planet to a losing position in the climate change fight, he said, because the issue is not important to GOP voters, making it virtually impossible to secure buy-in from Republican legislators.

That sentiment is clear to top Republican lawmakers like Wyoming Sen. John Barrasso, the ranking Republican on the Senate Energy and Natural Resources Committee.

“All the polling that we’re doing is showing concerns with the economy, concerns with crime, concerns with the border, and all of those issues are ones that President Biden’s administration is polling poorly,” he told POLITICO, adding that he would “do everything I physically can” to stop Senate Democrats’ $3.5 trillion spending plan.