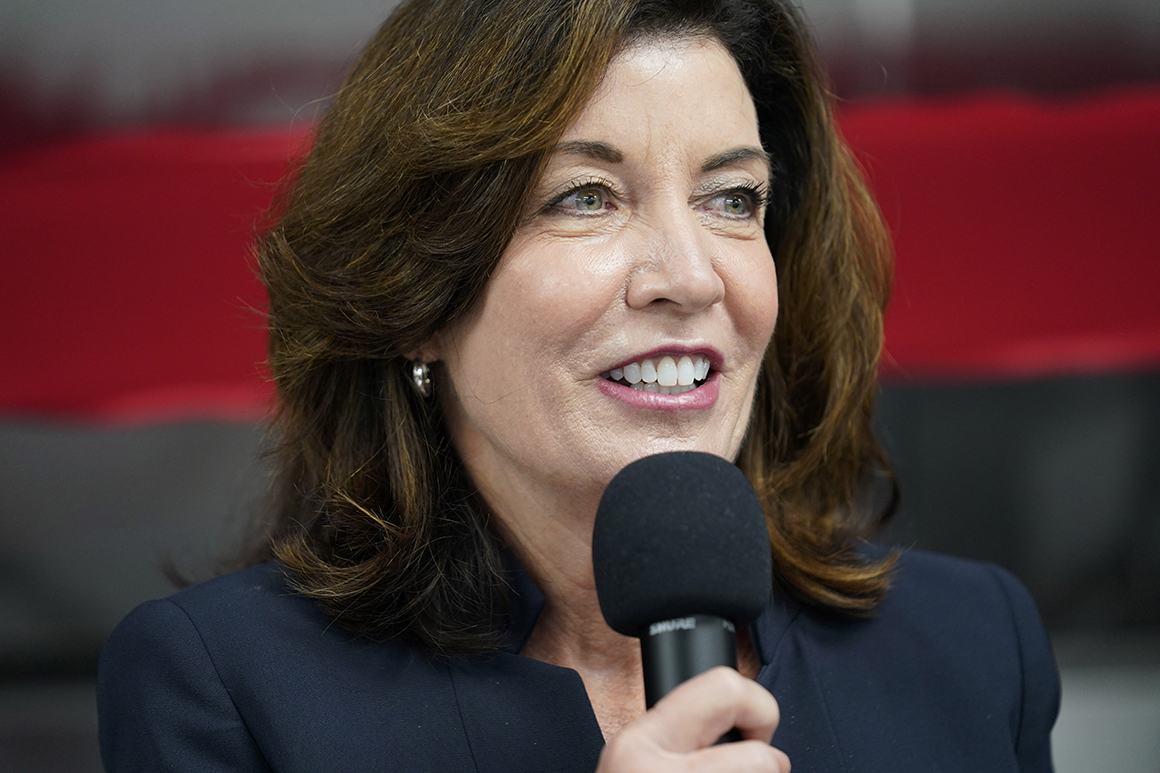 ALBANY, N.Y. — An Andrew Cuomo news conference is a Darwinian affair, with questions asked by those who shout the the loudest. The governor occasionally sits back, grinning, as he watches two reporters try to out yell each other until one, eventually, relents.

Kathy Hochul, at least on her first day, had a very different way of doing things.

New York’s lieutenant governor took the stage Wednesday to introduce herself to the world, 13 days before she succeeds Cuomo and becomes one of the country’s most prominent public figures. Calmly, methodically, she called on specific reporters — announcing predetermined names in rapid-fire succession as soon as she finished answering the previous question.

At one point, a brief technological glitch led to the resumption of the familiar shouting. “This isn’t going to work, team,” Hochul said.

The event in the state Capitol might as well have been a microcosm of the message that Hochul is trying to deliver as she transitions into office and charts a path to winning the governorship in her own right. Prepare, she seemed to be saying, for a no-nonsense departure from the toxic style of the Cuomo era.

“While it was not expected, it is a day for which I am prepared,” Hochul said. “Make no mistake: Our work has already begun.”

The approach by Hochul, who at 62 will become the first woman to ever lead New York state, was viewed by some as an extension of her desire for meticulous organization.

The press conference was, certainly, a very different introduction than the one David Paterson gave when he became governor following Eliot Spitzer’s abrupt departure in 2008, the end result of prostitution scandal.

Paterson’s first news conference as incoming governor, and his inaugural address a few days later, were most memorable for their one-liners: “Only the lobbyists!” he said when asked if he had ever patronized a prostitute, as Spitzer so infamously did.

The day after Paterson took his oath, he began a press conference with words — “I betrayed a commitment to my wife several years ago” — that are not exactly the stuff of PR professionals’ dreams.

Hochul, on the other hand, just had to distance herself from Cuomo, who announced his resignation Tuesday after facing accusations he sexually harassed 11 women. Lawmaker were moving to impeach him.

“At the end of my term, whenever it ends, no one will ever describe my administration as a toxic work environment,” she said.

She said she was ready to serve, projecting confidence and declaring, “I have a vision.”

Hochul, who will face reelection next year if she wants to keep the job, previously served in Congress and as county clerk in Erie County, home to Buffalo. After more nearly 7 years as lieutenant governor, much of it spent crisscrossing the state attending the type of events Cuomo is not fond of appearing at himself, some in Albany say she is ready for the top post.

“Kathy Hochul is much more prepared than the last lieutenant governor to take the big job,” said Peter Kauffmann, who previously worked as Paterson’s director of communications.

Hochul has been in the spotlight before. But the introductory press conference was likely her biggest yet. It was held in the Blue Room of the Capitol, on the opposite side of the building of the Red Room, where Cuomo held his nationally famous Covid briefings last year.

Events she’s held in that room in the past, such as meetings of a Women’s Suffrage Commission that she chaired as lieutenant governor, often drew only one or two reporters. There were at least 17 television cameras present on Wednesday.

But one thing stood out compared to events of other New York officials, often seeking national attention: all of the reporters who were called on were based in New York, and numerous outlets with broader audiences were ignored.

“Hometown favorite,” she said while giving the first question to the Buffalo News .