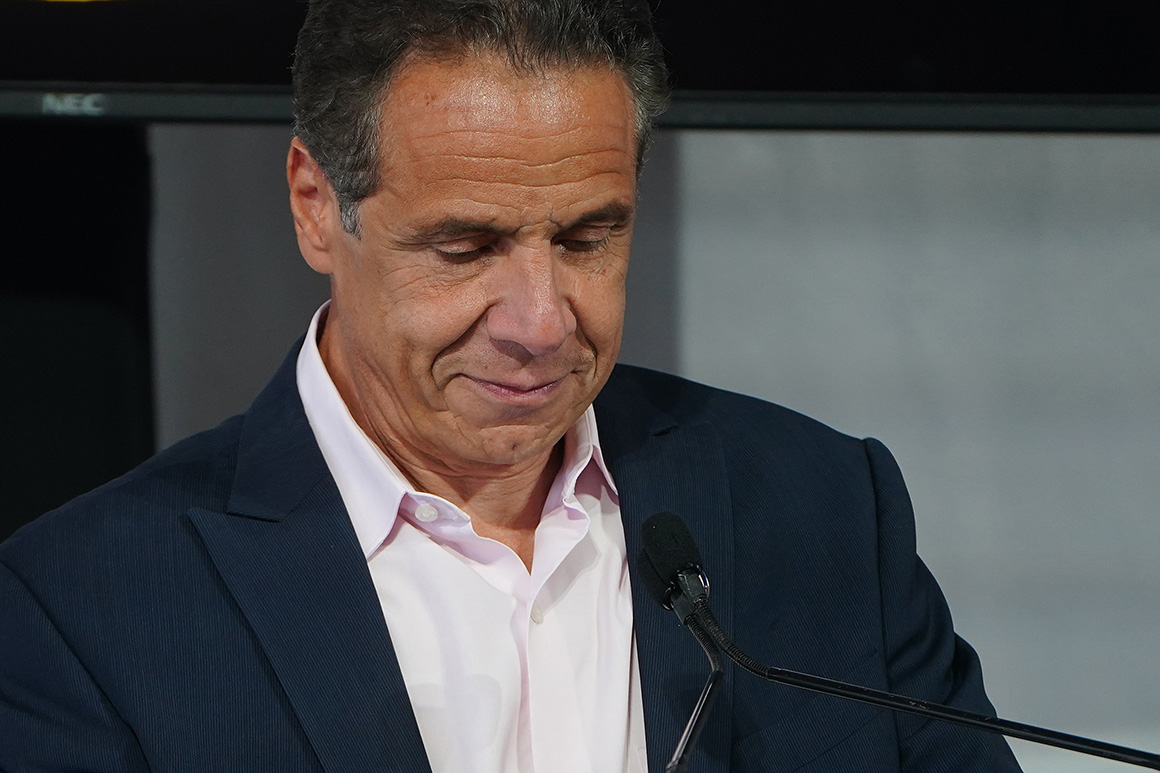 Andrew Cuomo became a national political celebrity as a pandemic of historic proportions hit New York in the spring of 2020. During nationally televised news briefings, he seemed to radiate competence, transparency and empathy at a time when the Trump administration’s response to the emergency was widely criticized as inept.

Ironically, the countdown to Cuomo’s downfall began just as his fame and profile were on the rise. It started with his administration’s handling of Covid-19 deaths among nursing home residents, and exploded when multiple women accused him of sexual harassment and of presiding over a toxic work environment.

Here are the key dates leading to Tuesday’s announcement that Cuomo would resign in wake of state Attorney General Tish James’ report detailing multiple allegations of sexual harassment against the governor.

March 25: Cuomo issues a hospital discharge and admissions directive to nursing homes, which states that residents cannot be denied readmission to facilities solely based on a confirmed or suspected Covid-19 diagnosis.

April 22: The Cuomo administration releases new data that more than doubled the number of reported deaths in the state’s nursing homes. Department of Health spokesperson Jill Montag said the updated figures included residents who died at hospitals as well as at facilities with fewer than five deaths — numbers that had been left out of the previous count.

April 23: Cuomo announces that the Department of Health, in partnership with Attorney General Tish James, will investigate nursing homes for compliance with state and federal directives on Covid-19 separation policies, staffing and personal protective equipment.

July 7: The Department of Health releases a report concluding that the thousands of Covid-19-related long-term care deaths in New York were largely driven by community spread from infected staff or visitors in the early days of the pandemic, not the March 25 transfer policy.

Aug. 26: The Justice Department announces that it was considering whether to investigate if New York and other Democrat-led states violated nursing home residents’ civil rights by admitting Covid-19 patients to the facilities. Federal officials request data focused on state-run nursing homes, not privately run facilities, even if they are licensed by the state and accept payments under Medicaid. Just a handful of New York’s 600-plus nursing homes are state-run facilities.

Dec. 13: Lindsey Boylan, who formerly worked for Cuomo and the state’s economic development agency, accused the governor of workplace harassment on Twitter. Cuomo denies the allegations the following day.

Jan. 27, 2021: The Legislature announces that a joint hearing on the health care and Medicaid-related portions of Cuomo’s Fiscal Year 2022 budget will be rescheduled from Feb. 3 to Feb. 25 due to a scheduling conflict. Days earlier, Sen. James Skoufis, a Hudson Valley Democrat and Committee on Investigations chair, threatened to subpoena DOH over the nursing home data, unless Zucker provided it at the Feb. 3 hearing.

Jan. 28: The state attorney general’s office releases a report accusing the state of drastically undercounting Covid-19 deaths in nursing homes. It suggests the state’s official tally of about 8,500 deaths could be off by as much as 50 percent. Zucker rejected claims of an undercount and releases updated figures that confirmed 9,786 fatalities associated with skilled nursing facility residents between March 1, 2020, and Jan. 19, 2021. The new total does not include 2,957 presumed Covid-related nursing home fatalities.

Feb. 3: Albany County acting Supreme Court Justice Kimberly O’Connor rules that the state Department of Health must disclose to the Empire Center for Public Policy within five business days nursing home death data, which the watchdog group had requested under the Freedom of Information Law in August.

Feb. 10: Cuomo administration officials meet with a group of legislators on the state’s handling of Covid-19 in nursing homes and release a 16-page response to questions raised at the August hearings. Following the meeting several Senate Democrats knock state health officials for taking months to respond, but make a point of avoiding the full-throated critique of some chamber Republicans. The state also releases nursing home data requested by the Empire Center.

Feb. 11: The New York Post reports that Secretary to the Governor Melissa DeRosa told Democrats at the Feb. 10 meeting that the state “froze” out of fear that the true numbers of Covid-19 deaths in nursing homes would be used against them by federal prosecutors. Top Republicans immediately call for Cuomo’s ouster following the nursing home revelation. The governor’s office defends its handling of the issue, saying it was “cooperating with Federal document productions and that was the priority.”

Feb. 15: Cuomo declines to apologize for his administration’s decision to let Covid-19 patients into nursing homes in the early days of the pandemic. But he says his administration “made a mistake in creating the void” that allowed for “misinformation and conspiracy.”

Feb. 17: The governor’s office releases a full transcript of the meeting. Cuomo also takes aim at Assemblymember Ron Kim, a Queens Democrat, arguing that his criticism of the state’s nursing home policies during the pandemic is politically motivated.

Feb. 19: Zucker offers a matter-of-fact, scientific response to criticism raised over the state’s nursing home policies — remarks seen as a preview of coming attractions of sorts for his budget testimony. The governor announces a slate of nursing home overhaul proposals as part of the 30-day amendments to his budget, including new penalties for public health law violations, direct care spending ratios and an emergency receiver appointment process.

Feb. 24: Boylan pens a Medium post in which she accuses Cuomo of having kissed her without her consent and asking her to play strip poker, alleging a pattern of sexual harassment. Several hours after Boylan published her allegations, Cuomo’s office issued a statement denying the claims.

Feb. 25: Zucker is grilled for five hours during a joint legislative budget hearing as lawmakers seek more details about the governor’s nursing home policies during the earliest weeks of the coronavirus pandemic.

Feb. 27: Charlotte Bennett, who began working for the state in March 2020, tells The New York Times that the governor had repeatedly asked her intimate personal questions, which felt like “something out of a horror movie.” They included questions about her romantic life and whether Bennett, 25, “had ever been with an older man.”

Feb. 28: James and Cuomo’s office reach an agreement on how to investigate allegations of sexual harassment made against the governor.

March 1: Anna Ruch accuses Cuomo in a New York Times piece of making an inappropriate advance at a wedding.

March 5: Democrats in the New York Legislature pass a bill that imposes some limits on Cuomo’s king-like pandemic emergency powers.

March 6: Ana Liss, who worked as a policy and operations aide to Cuomo from 2013 to 2015, alleges that the governor had “asked her if she had a boyfriend, called her sweetheart, touched her on her lower back at a reception and once kissed her hand when she rose from her desk,” The Wall Street Journal reports. Other former staffers accused Cuomo of inappropriate workplace behavior in a Washington Post report. Karen Hinton, who worked for Cuomo as a press aide in the 1990s when he was the U.S. housing secretary, told the Post Cuomo invited her to his hotel room in 2000 when she was working as a consultant and embraced her in a way she said was “very long, too long, too tight, too intimate.”

March 7: Andrea Stewart-Cousins, the majority leader of the New York state Senate, directly calls on Cuomo to resign. Assembly Speaker Carl Heastie does not go quite as far, but says Cuomo should “seriously consider” whether he should remain in office. Cuomo doubles down in defending himself against calls for his resignation, saying that quitting would be “antidemocratic.”

March 9: The Times Union reports that another woman has accused Cuomo of touching her without consent during a late 2020 encounter at the governor’s mansion.

March 11: Legislative Democrats promise to launch their own investigation into the governor’s behavior — the first step toward impeachment.

March 18: After facing weeks of accusations of inappropriate behavior by former aides and other women, Cuomo starts to cut off the press.

March 31: Published reports indicate that Cuomo received an offer in excess of $4 million for his pandemic book: “American Crisis: Leadership Lessons from the COVID-19 Pandemic.” The governor declines to say how much he was paid, adding that the information will be on his income tax return, which he will make public.

April 26: Cuomo fiercely denies allegations of sexual harassment leveled at him over the past several months during his first in-person Q&A with press since 2020.

April 29: State lawmakers issue their first major override of Cuomo’s pandemic executive actions, voting to repeal orders issued at the height of the state’s coronavirus outbreak. Cuomo, meanwhile, tells reporters that the Department of Health did not send a letter prepared for the Legislature containing information on Covid-19 deaths in long-term care facilities — as first reported by the New York Times — after concerns were raised about the data’s accuracy. The governor also says he has not been interviewed as part of James’ investigation, but is “eager” to tell his side of the story.

May 17: Cuomo releases tax returns showing that he was paid $3.12 million by Penguin Random House for his pandemic memoir, “American Crisis,” and is due to be paid an additional $2 million by the publisher in the coming years.

July 17: Cuomo reportedly answers questions under oath from two lead investigators hired by the state attorney general’s office about his treatment of women during an interview that lasts about 11 hours.

July 26: Cuomo publicly questions the trustworthiness of the lawyers leading James’ investigation into several allegations made against him in recent months.

Aug. 3: James announces findings of her office’s investigation into sexual harassment allegations involving Cuomo. “The independent investigation has concluded: Gov. Andrew Cuomo sexually harassed multiple women and in doing so violated federal and state law,” she said. “Specifically, the investigation found that Gov. Andrew Cuomo sexually harassed current and former New York State employees by engaging in unwelcome and non-consensual touching and making numerous offensive comments of a suggestive sexual nature that created a hostile work environment for women.” The governor responds to the allegations with a videotaped statement.

Aug. 5: A lawyer for the Cuomo administration assails James’ conclusion that the governor and his staff “impermissibly retaliated” against a woman who accused him of sexual harassment.

Aug. 6: Attorneys representing Cuomo and the Executive Chamber seek to poke holes in the sexual harassment findings detailed in James’ report, as well as the motives for the investigation.

Aug. 8: Secretary to the Governor Melissa DeRosa announces her resignation.

Aug. 9: Assembly leaders announce they will spend the next few weeks to review evidence against Cuomo and hear from experts as the chamber prepares for impeachment. Brittany Commisso, who was only described as Executive Assistant #1 in James’ report — which recounted how Cuomo allegedly groped her — speaks publicly for the first time.

Aug. 10: Cuomo announces he will resign as governor in 14 days, setting Lt. Gov. Kathy Hochul up to become the first woman to lead New York. The announcement, delivered via livestream, comes immediately after Cuomo’s attorney continued to raise questions about James’ report.