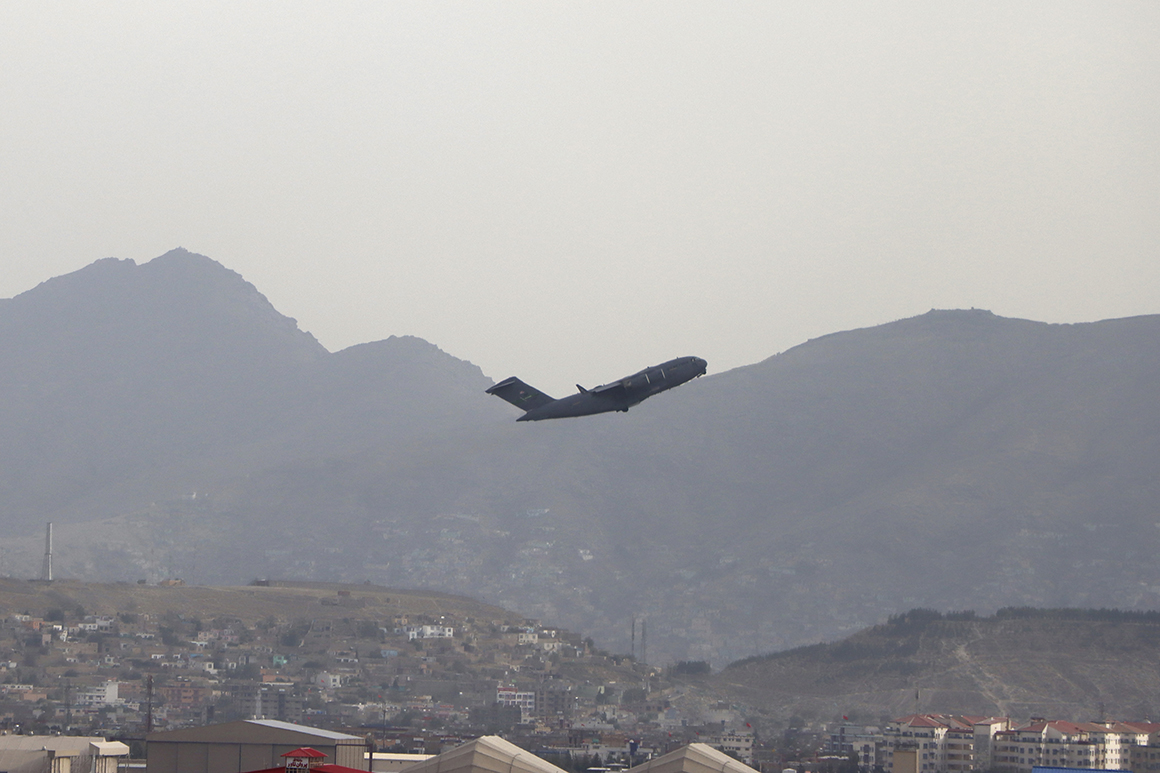 After 20 years the longest war in U.S. history has come to an end.

Gen. Frank McKenzie, the chief of U.S. Central Command, announced Monday that the last C-17s took off from Kabul’s Hamid Karzai International Airport around 3:29 p.m. Washington, D.C., time, leaving that facility and the country in the Taliban’s possession.

“I’m here to announce the completion of our withdrawal from Afghanistan and the end of the military mission to evacuate American citizens, third-country nationals, and vulnerable Afghans,” McKenzie told reporters in a surprise Pentagon news briefing.

“Tonight’s withdrawal signifies both the end of the military component of the evacuation, but also the end of the nearly 20-year mission that began in Afghanistan shortly after Sept. 11, 2001.”

“It’s a mission that brought Osama bin Laden to a just end, along with many of his al Qaeda co-conspirators. And it was not a cheap mission. The cost was 2,461 U.S. service members and civilians killed and more than 20,000 who were injured,” he continued.

“We did not get everybody out that we wanted to get out,” said McKenzie, noting however that all U.S. service members were evacuated “with 100 percent certainty.” He estimated that American citizens remaining in Afghanistan numbered “in the very low hundreds.”

In an address hours later, Secretary of State Antony Blinken confirmed that fewer than 200 American citizens who “wanted to leave,” and perhaps closer to 100, are still in Afghanistan. The U.S. and 97 other countries already announced they will still accept evacuees from Afghanistan, hoping the Taliban keeps its word and gives those who want to leave access to the airport.

About 1,200 people were airlifted out of Kabul during the last 24 hours, the White House announced earlier.

While some of the U.S. military’s equipment was removed from Afghanistan in recent days and weeks, other systems were in operation through the final moments of the mission, McKenzie said. Those systems were “demilitarized,” said McKenzie, including up to 70 MRAPs, 27 Humvees and 73 aircraft.

“We felt it more important to protect our forces than to bring those systems back,” McKenzie said.

McKenzie said that while the military evacuation has concluded, “the diplomatic mission to ensure additional U.S. citizens and eligible Afghans who want to leave continues.”

Blinken reiterated that message hours later. “A new chapter of America’s engagement with Afghanistan has begun. It’s one in which we will lead with our diplomacy. The military mission is /over, a new diplomatic mission has begun,” he said. “The main point I want to drive home here today is that America’s work in Afghanistan continues.”

The U.S. will shutter its embassy in Kabul and move it to Doha, Qatar, Blinken said. The former deputy at the mission, Ian McCary, will soon take charge.

Before the secretary’s address, top U.S. envoy for Afghanistan peace talks, Zalmay Khalilzad, tweeted: “Afghans face a moment of decision & opportunity. Their country’s future is in their hands. They will choose their path in full sovereignty. This is the chance to bring their war to an end as well.”

No Americans left on the last five C-17 plans out of Kabul, McKenzie said. The military had the capacity to evacuate more people leading up to departure, but “none of them made it to the airport.”

Asked about how the Taliban handled relations with the U.S. as the withdrawal entered its final stages, McKenzie said: “I will tell you that the Taliban have been very pragmatic and very businesslike as we have approached this withdrawal.” However, he insisted nothing was handed over to the Taliban directly by U.S. forces.

A green card holder stuck at the Kabul airport who spoke to POLITICO before McKenzie’s announcement said the Taliban were celebrating the Americans’ departure by shooting their rifles into the air.

Zabiullah Mujahid, a main spokesperson for the Taliban, tweeted: “The sounds of gunfire in Kabul are shots of joy at the withdrawal of US troops, and citizens are not worried,” adding soon after: “The last American occupier withdrew … and our country gained its full independence, praise and gratitude be to God.”

President Joe Biden said he will speak on his decision to withdraw and the end of the war on Tuesday. But in a statement today he said “it was the unanimous recommendation of the Joint Chiefs and of all of our commanders on the ground to end our airlift mission as planned. Their view was that ending our military mission was the best way to protect the lives of our troops, and secure the prospects of civilian departures for those who want to leave Afghanistan in the weeks and months ahead.”

Earlier in the day, the U.N. Security Council passed a U.S.-drafted resolution to let the Taliban know there’s a global consensus as to how it can win formal international recognition.

The three main conditions are ensuring those who want to leave the country can do so; safeguarding the human rights of women, children, and minorities; and stopping any terror attacks against America or its allies from hatching in Afghanistan.