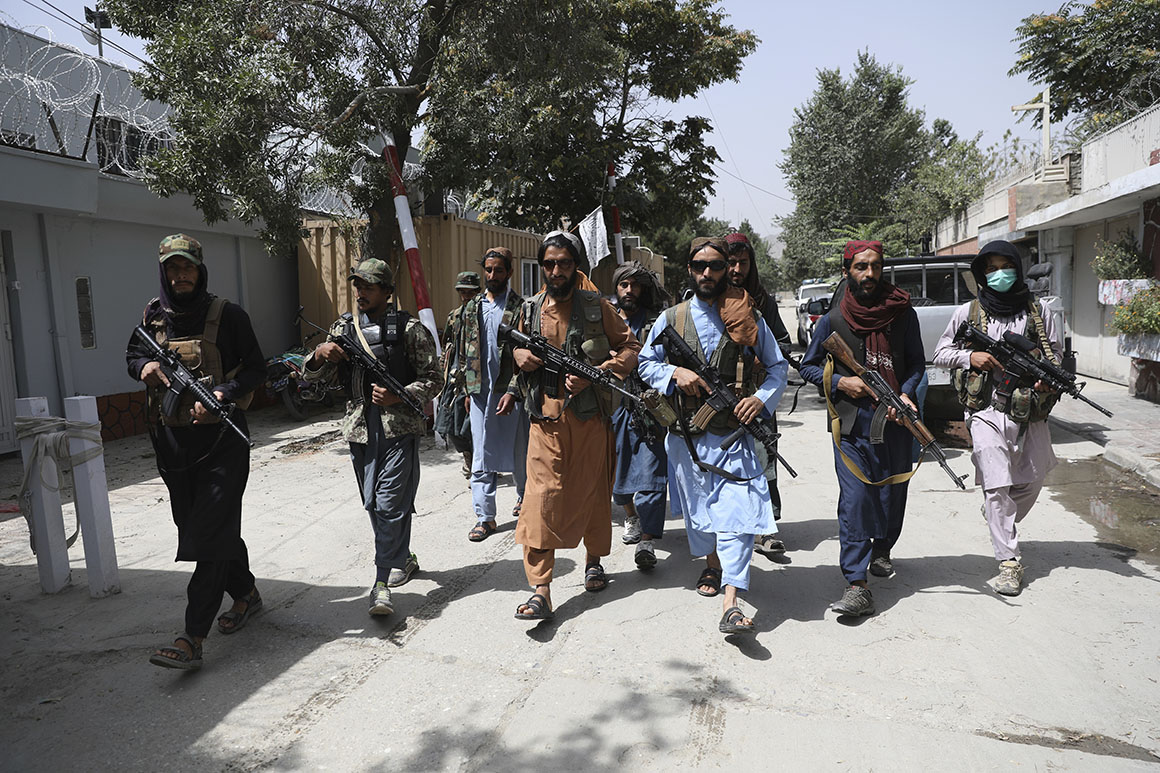 In brokering the surrender of entire Afghan army divisions over the past week, the Taliban took control of billions worth of American-made weapons and equipment, including small arms, Humvees, pickup trucks, aircraft and drones.

In the chaos of the moment, however, it’s unclear to U.S. officials how much equipment the Taliban has seized and how much sits unattended on bases and small combat outposts across the country. That uncertainty over the status of a massive arsenal is sparking fears of a regional arms bazaar that could be a boon to terrorist groups and insurgents.

“What we are seeing now is these weapons, which have ended up in the hands of the Taliban, will probably circulate in the region for many decades to come,” said Nils Duquet, Flemish Peace Institute interim director. “At the moment, they’re very instrumental [because] if you want to control territory, you need small arms.”

The images that have spread across the world over the past week of Taliban fighters posing in front of captured helicopters and light attack aircraft have allowed the group to further humiliate the former Afghan and American governments. But these images don’t concern longtime extremism watchers as much as the proliferation of guns, bullets and grenades.

“I have full confidence that some of this equipment is going to end up in the hands of al Qaeda and other bad actors, it’s inevitable,” said Colin Clarke, director of policy and research at The Soufan Group. “This is not going to just end with the Taliban.”

Normally, when groups such as the Taliban have captured small arms, there’s not much trading or selling of the assets, at least initially, Clarke said. But it’s not clear how many guns and ammunition boxes are still sitting unattended, or how desperate the Taliban might be for quick cash as they try to shift to running the country.

That represents a serious security risk for the countries surrounding Afghanistan because the weapons could easily be sold to militias both inside the country and in places such as Pakistan, said Guy Lamb, safety and violence initiative director at the University of Cape Town.

“What happens in these situations is that arms brokers will make themselves known [and] offer cash or valuable goods in exchange for those kinds of weapons,” Lamb said.

The volume of U.S. military assistance over the past two decades is staggering, with $83 billion spent to train and equip an army that after years of heavy battlefield losses, finally melted away.

Since 2003, the United States has provided Afghan forces with at least 600,000 light weapons such as M-16 and M-4 rifles, 76,000 vehicles, 16,000 night-vision goggles, 162,000 radios and other communications equipment, according to a 2017 Government Accountability Office report, the most recent accounting of U.S.-made equipment.

More recently, in a three-year period between 2017 and 2019, the U.S. shipped another 4,700 Humvees, 20,000 hand grenades and thousands of small munitions and grenade launchers, according to a 2020 Special Inspector General for Afghanistan Reconstruction report.

Watchdog groups such as SIGAR have long reported that thousands of rifles and other pieces of equipment have disappeared soon after being shipped to units in the field, and the Taliban have long crowed over the U.S.-made gear it had managed to get its hands on, including special operations-grade small arms and night-vision goggles. But these were always in small numbers.

The massive haul over the past week, which includes artillery pieces and mortar systems, would provide a huge advantage over any groups that seek to challenge the Taliban’s rule, including a coalition of militias in the north, which are now coming together.

But the usefulness could run out without a functioning repair and maintenance system.

“The Taliban will likely be able to maintain the functionality of Russian-manufactured equipment indefinitely,” while spare parts for U.S.-produced weapons will quickly be used up, if used at all, said Justine Fleischner of Conflict Armament Research, a group that tracks weapons trafficking.

She added there’s “a high probability” that some abandoned equipment has already fallen into the hands of al Qaeda and ISIS fighters, “given the chaotic situation on the ground and complex local interlinkages between these groups.”

The U.S. government is struggling to take inventory of all of the equipment that the retreating army surrendered, including how much of it was in working condition by the time the insurgents seized them.

“We don’t have a complete picture, obviously, of where every article of defense materials has gone but certainly, a fair amount of it has fallen into the hands of the Taliban,” White House national security adviser Jake Sullivan told reporters this week.

Much of the more sophisticated equipment such as aircraft and communications gear will likely become inoperable within months, however. Even the Afghan army and air force couldn’t maintain their aircraft and most of their vehicle fleets without thousands of foreign contractors on hand to do the work.

In the short-term, there is little sense the Taliban would be able to operate any of the aircraft it has seized, and given the complex repair they require, the A-29 attack planes and Black Hawk helicopters will likely have a limited lifespan unconnected from the global, U.S.-funded supply chain. Dozens of A-29s and helicopters were flown to Uzbekistan over the weekend by Afghan pilots fleeing the Taliban takeover. It’s not clear what will become of those aircraft.

One concern for the Taliban is having access to the correct caliber of ammunition, but after the millions of stored rounds for the U.S.-made guns eventually run out, they will be likely to find more on the open market.

“The Taliban has considerable experience handling and using a wide array of U.S.-manufactured weaponry, including heavy machine guns, mortars, howitzers, and Humvees,” said Robert Muggah, principal at the SecDev Group. “After all, they’ve been buying, pilfering and seizing them from ANDSF forces for almost two decades.”