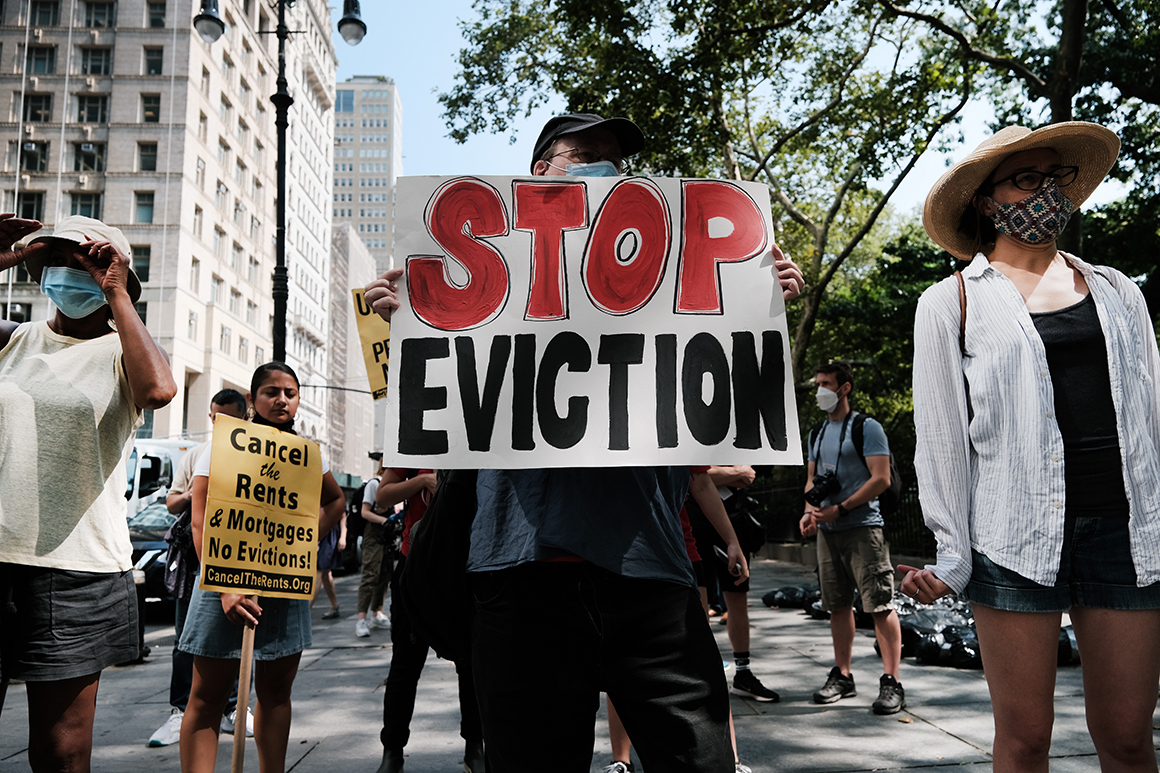 Washington’s pandemic response is battering the finances of independent landlords, most of whom haven’t received federal rental aid designed to keep them whole during a nearly year-long eviction ban that has forced some property owners to house tenants for free.

The distress is acute for so-called mom-and-pop landlords — those who own fewer than 10 properties, which typically have between one and four units. They supply about half the housing stock in the country, and they’re more likely than corporate property managers to have lower-income tenants who’ve fallen behind on their rent as a result of Covid-19. About 30 percent have household incomes below $90,000 a year.

Many are growing increasingly angry with the government’s handling of housing safeguards, as they continue to pay utilities and mortgages but face state and local bottlenecks when trying to tap into $46.5 billion in rental aid allocated by Congress to offset losses from the eviction ban imposed last September. As of the end of June, just $3 billion of the funds had been disbursed. Landlords have lost billions of dollars a month under the ban.

Landlords are unsympathetic figures in the eyes of many struggling tenants, but they’re emerging as a new economic problem for Congress and the White House, after Democrats prioritized renters by pushing for the revival of the eviction ban earlier this month. The Biden administration has yet to find a way to accelerate the release of federal rental aid, meaning property owners will continue to be squeezed until the eviction moratorium expires Oct. 3 or is struck down in court.

A federal judge on Friday said the Centers for Disease Control and Prevention exceeded its authority by implementing the ban, but she let it remain in place in place until higher courts decide its legality. Local chapters of the National Association of Realtors are suing to block the policy.

Roughly 23 percent of small landlords leasing single-family rentals had sold at least one property as of February, according to a survey by the National Rental Home Council. Six months later, the renewed moratorium and the continued logjam in aid disbursal mean many more may not be able to hold on.

Some 6.5 million renter households are behind on rent, according to the most recent U.S. Census survey. Nearly 59 percent of those households live in properties with between one and four units, 72 percent of which are run by mom-and-pop landlords, according to an analysis of government data by the National Association of Realtors.

“The majority of rental housing in most major cities is provided by individuals,” said Dean Hunter, CEO of the Small Multifamily Owners Association and a landlord in Washington. “The problem is in this case the government regulated individuals as if they are multinational organizations. It made no sense.”

White House spokesperson Emilie Simons said the administration is concerned about renters and landlords in need, citing its support for rental assistance.

But some Democrats are openly dismissing property owners’ concerns.

“Yes, the small landlords are at a disadvantage, but guess what, they know how to go to the bank, they know how to get a loan, ” House Financial Services Chair Maxine Waters (D-Calif.) said July 30 as she rallied support for extending the eviction ban. “They know how to deal with hard times. … I believe that they can hang on until [aid] flows smoothly, and I do not believe that the [renter] families, many of whom have three and four children, have that opportunity.”

Even if they can wait out the sluggish aid, though, some landlords may never recover the money they’ve lost over the past year and a half.

“The eviction moratorium is protecting some renters who aren’t eligible for aid or who will move out before it can arrive, so the landlords will never see that money,” said Jay Parsons, a rental housing economist at property management software provider RealPage.

Smaller property owners appear to be struggling more than larger ones when it comes to collecting rent, according to Parsons.

“One of the things we’ve seen in our own data is, the smaller the property, the lower the rent collections,” Parsons said, adding that buildings with fewer than 100 units have markedly lower collection rates than bigger properties.

In Dallas, Haines and his wife own three apartment buildings with fewer than 100 units, where the average rent is between $780 and $950 a month for a one-bedroom apartment. He said they have about 20 investors — “all people we know, family and friends” — and 10 employees, of which seven are full-time and three are part-time.

After paying employees, investors, utilities, insurance and property taxes — which have skyrocketed over the last two years as property values soared — the couple typically takes home about $32,000 a year from their properties. Over the last 18 months, he said they’ve accrued $250,000 in debt as rental payments slowed to a trickle.

“We’ve turned it over to collections, but we’ll never see it,” he said of his tenants unpaid rent. “In January we had to take $50,000 out of our personal savings just to keep one of the properties going so we didn’t have to lay anyone off.”

Haines said he had one tenant who did not lose her job but who refused to pay rent over the course of the pandemic before moving out in January. If a tenant has moved, the landlord cannot receive assistance to cover their back rent. Another non-paying tenant has cut off communication, which means Haines can’t file a claim for assistance on his behalf because such claims need the tenant’s signature.

Hunter, who leads the Small Multifamily Owners Association, said restrictions imposed on landlords by a patchwork of state and local bans on top of the CDC’s national policy made things worse for property owners in major cities.

“The CDC moratorium was just the beginning,” Hunter said. “The problem is D.C. and other jurisdictions went further than the CDC moratorium and added additional obstacles for providers. The impact has been devastating.”

State and city governments have faced a series of obstacles in delivering the federal aid. They were required to set up brand-new infrastructure and proceeded with caution out of fear of being singled out for awarding money to the wrong recipients. Federal officials have complained the application process at the state and local level is often too complex.

To make things worse, many independent landlords are unaware that rental aid exists. More than 40 percent of landlords and more than half of tenants did not know about the assistance programs, according to a May survey by the Urban Institute and Avail, an online platform that provides services for mom-and-pop landlords.

In the meantime, landlords complain that the issue has become too emotional and political — that they’ve been demonized even as they do what they can to help tenants.

“Our industry has been picking up the slack from the very beginning, in terms of helping people deal with the pandemic,” said Cindy Chetti, senior vice president at the National Multifamily Housing Council, which represents professional landlords.

“That’s what’s not being reported, how much the industry is doing on this, how much they are working with residents,” Chetti added. “That’s the untold story, but nobody wants to talk about it.”

“Next to the front-line medical workers and emergency responders, I think the small-business landlords who have kept their tenants housed should be getting a good deal of credit,” he said.