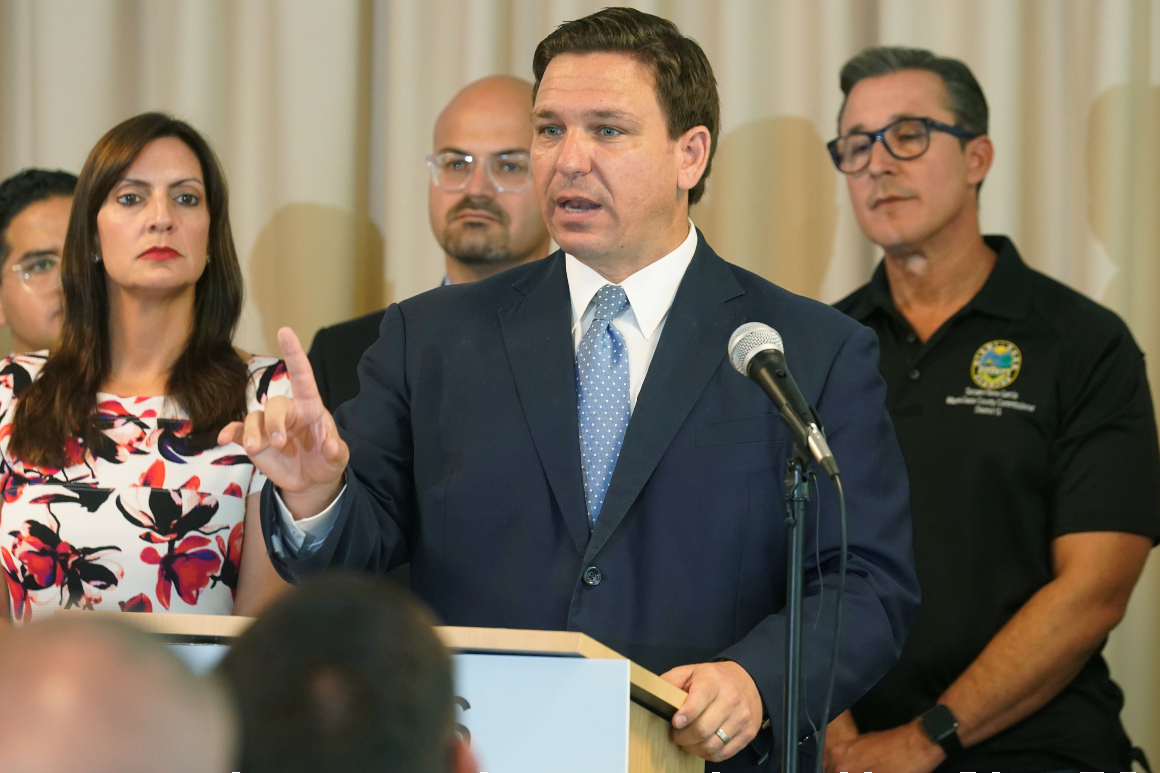 MIAMI — Florida Gov. Ron DeSantis made himself the national face of the anti-Biden Covid-response resistance.

So the president decided to punch it.

For the past two weeks, Biden and his allies have publicly escalated a war of words and with DeSantis on Twitter, in speeches by the president and in White House press briefings. Biden advisers see DeSantis — who has defiantly fought mask mandates as infections and hospitalizations skyrocketed in the battleground state — as a foil to a president whose strength is his empathetic style and safety-first response to coronavirus that helped him defeat DeSantis’ benefactor, President Trump, nine months ago.

Amid the Covid explosion, DeSantis’ constant criticisms as well as his controversial policies and a barrage of media questions about the governor, White House advisers say Biden and the team had no choice but to take on the Republican. But the president has seldom gone to such lengths to train so much fire on a critic other than Trump.

“DeSantis epitomizes the opposite choice in the sense of the way he handles this issue and his personal style,” said Celinda Lake, a pollster and Biden political adviser. “Without getting into the polarization of Trump — a lot of voters think Trump is sort of gone from the scene for now — he reinforces the contrast that helped us win the election and sharpens the focus on the Trump style and policies.”

But the political dynamics are unavoidable, and Biden’s attention on DeSantis has clearly elevated the governor.

With Trump deplatformed from Twitter and Facebook, DeSantis has emerged as the top potential GOP Biden challenger in 2024 if Trump doesn’t run again, a position fueled by the governor’s pugilistic style and his conservative management of coronavirus response in Florida.

DeSantis, up for reelection next year, has raked in campaign cash by attacking Biden and his administration’s coronavirus response, going so far as to single out the nation’s top infectious disease specialist, Anthony Fauci, by selling “Don’t Fauci My Florida” campaign merchandise last month, just as Covid cases began rising.

“When the Biden Administration attacks Gov. DeSantis, the White House looks scared and tone deaf,” said Helen Aguirre Ferré, a DeSantis campaign adviser and executive director of the Republican Party of Florida. “Gov. DeSantis doesn’t care what those in the D.C. bubble think or say, he only cares about Florida’s safety and success all the while protecting individual liberties.”

Ferré and other DeSantis advisers and allies also faulted Biden for focusing so intensely on Florida while saying relatively little of Democrat-run states with higher death rates, such as Michigan, New York, New Jersey or Connecticut.

Democrats say DeSantis’ approach to managing the current Delta variant surge poses a risk to him because it gives Biden an opportunity to question his competence and his seriousness in fighting a deadly virus, a criticism that worked with great success against Trump, according to one Biden adviser.

“DeSantis is Trump’s Mini Me,” the adviser said. “And he’s going to suffer the same fate as Trump. Unfortunately, a lot of people will get sick and die.”

Democrats also cling to the hope that Trump will become jealous with all of the attention DeSantis is getting and begin criticizing his protégé, but a Trump adviser told POLITICO that “it’s a pipe dream.”

Hostilities have markedly escalated after DeSantis on July 30 threatened to withhold school money and administrators’ salaries if students are required to mask up without the ability for a parental opt-out. Biden then told DeSantis, as well as Texas Gov. Greg Abbott, to get out of the way.

DeSantis has said he doesn’t “want to hear a blip” out of Biden about Florida. Biden has called DeSantis and Abbott “disingenuous” and suggested DeSantis was so insignificant that he didn’t recognize the Floridian’s name. DeSantis then suggested Biden was a doddering and forgetful old man.

In short, DeSantis wants to frame the issue around parental rights, saying people have little to fear because Covid infections in schools has been relatively rare and serious illness rarer still. Biden’s White House, however, seeks to define DeSantis as reckless, emphasizes the threat to children and the possibility of school closures as the highly transmissible Delta variant leads to a spike in pediatric Covid cases.

Michael Caputo, who advised Trump’s Covid response and his first campaign, said he sees the Biden 2020 Playbook is being used against DeSantis.

“From a 2024 perspective, Biden is launching the DeSantis for president campaign,” said Caputo, who recently moved to Florida. “They’re doing to DeSantis what they did to Trump: scaring the hell out of people and hiding any hope. Why are they singling out Florida so much but not talking at all about how the virus is modeled to recede?”

To Caputo’s point, a University of Florida model of the virus forecasts that Covid cases will peak mid-month and then steeply decline, even if vaccination, masking or social distancing rates don’t change. For DeSantis, who also notes cases are increasing in mask-mandate states, it’s proof that the virus comes in waves and that government can do little about it.

To Democrats and public health experts — who urge mask-wearing — DeSantis has a dangerous, irresponsible mindset that has helped encourage people to not take proper precautions. It’s also potentially unpopular nationwide, according to polls.

Mask mandates and even mandatory vaccinations are also popular with voters overall, albeit not Republicans, according to a POLITICO/Morning Consult poll released Wednesday. The poll also showed that voters give Biden a 58 percent approval rating in handling the virus, 7 points higher than his general job-approval rating.

As the polls show Biden on more solid ground nationwide than DeSantis, the White House and its allies have intensified their sniping.

Earlier in the day, another Biden White House adviser sniped at DeSantis on Twitter by suggesting he was endangering kids but “should keep the public safe, not risk lives for politics.” A spokesman amplified a critic who chided DeSantis for giving law enforcement $1,000 bonuses made possible because of Biden “and the COVID relief that only Democrats passed.”

The night before, White House chief of staff Ron Klain bashed the governor on CNN, channeling Biden’s first attack on DeSantis and Abbott when he said they need to “get out of the way.” White House press secretary Jen Psaki has repeatedly echoed the phrase and, in response to press questions over the past two weeks, repeatedly criticized DeSantis.

On Wednesday, Psaki suggested DeSantis was sugar-coating a dire situation in the state, which requested more ventilators as hospitals started to fill with sick people. DeSantis was initially unaware that his administration requested the ventilators.

“Our war is not on DeSantis, it’s on the virus, which we are trying to kneecap and he does not seem to want to participate,” Psaki, responding to yet another media question about DeSantis and Biden, said during the White House press briefing.

Psaki also singled out DeSantis for not spending enough Covid relief money on schools, but DeSantis spokesperson Christina Pushaw said Florida’s spending was in line with many other big states. Similarly, Psaki in January accused DeSantis of not vaccinating enough people after he said he opposed “FEMA camps” to distribute more shots, but the governor countered that the state had a higher vaccination rate than other populous states. He later reversed course and accepted the federal help.

Biden allies have also begun an anonymous whisper campaign, claiming the state has not properly coordinated with the Federal Emergency Management Agency ahead of hurricane season, but state and local officials denied the accusation. Last month, Biden allies also anonymously accused DeSantis of not engaging FEMA quickly enough after a condominium collapse in the village of Surfside, but state and local emergency managers denied that as well.

DeSantis and Biden notably called a truce after the condo collapse tragedy. At one point, Biden came to Surfside and held a public event with DeSantis as the two appeared to put politics aside and made kind remarks about each other.

But as the virus spread in Florida, which accounted for as many as one in five of the nation’s hospitalizations earlier this month, the animosity played out on a national stage. DeSantis and Abbott are the only two governors who have rebuffed an offer to discuss how to open schools safely with Education Secretary Miguel Cardona.

Biden has required mandatory vaccinations for the military but has yet to try to require it of other federal government personnel. DeSantis is opposed to mandatory vaccinations but has encouraged people to get vaccinated. DeSantis, though, de-emphasized vaccine outreach after a significant proportion of Florida’s large elderly population — at most risk of death and hospitalization — got their shots.

About half Florida’s population has been vaccinated, ranking it in the middle of the pack of states. Florida’s death rate is also in the middle, a statistic belied by the outsized attention DeSantis has received from Democrats, health experts and pundits during the three waves that have rolled through. Still, nearly 41,000 Floridians have died from Covid out of the roughly 616,000 American casualties. And the most recent spike has led to thousands of hospitalizations and has sparked fears among parents that their children are at risk of contracting the virus as the new, in-person school year begins.

DeSantis also views the virus as less of a threat than Biden does, saying it’s here to stay and that people need to learn to live with it as it become a common but less harmful endemic illness — like the flu or common cold from another coronavirus — once more people chose to get vaccinated or become infected.

To the Biden Administration, DeSantis runs the risk of sounding like Trump, who downplayed the severity of the coronavirus by saying “one day — it’s like a miracle — it will disappear.”

“He’s not the first person to posit that the virus is just going to go away. And that person was wrong as well,” said Dr. Cameron Webb, a senior White House Covid adviser.

“The Delta variant is a game-changer in this conversation,” Webb said. “We’re talking about a variant that is clearly, unequivocally spreading faster, that’s hitting younger people and landing them in the hospital. And I think that when you put those things together. You say, ‘well when there’s a game changer. We need to change the game.’ And I think that’s what, that’s the opportunity that’s being missed.”