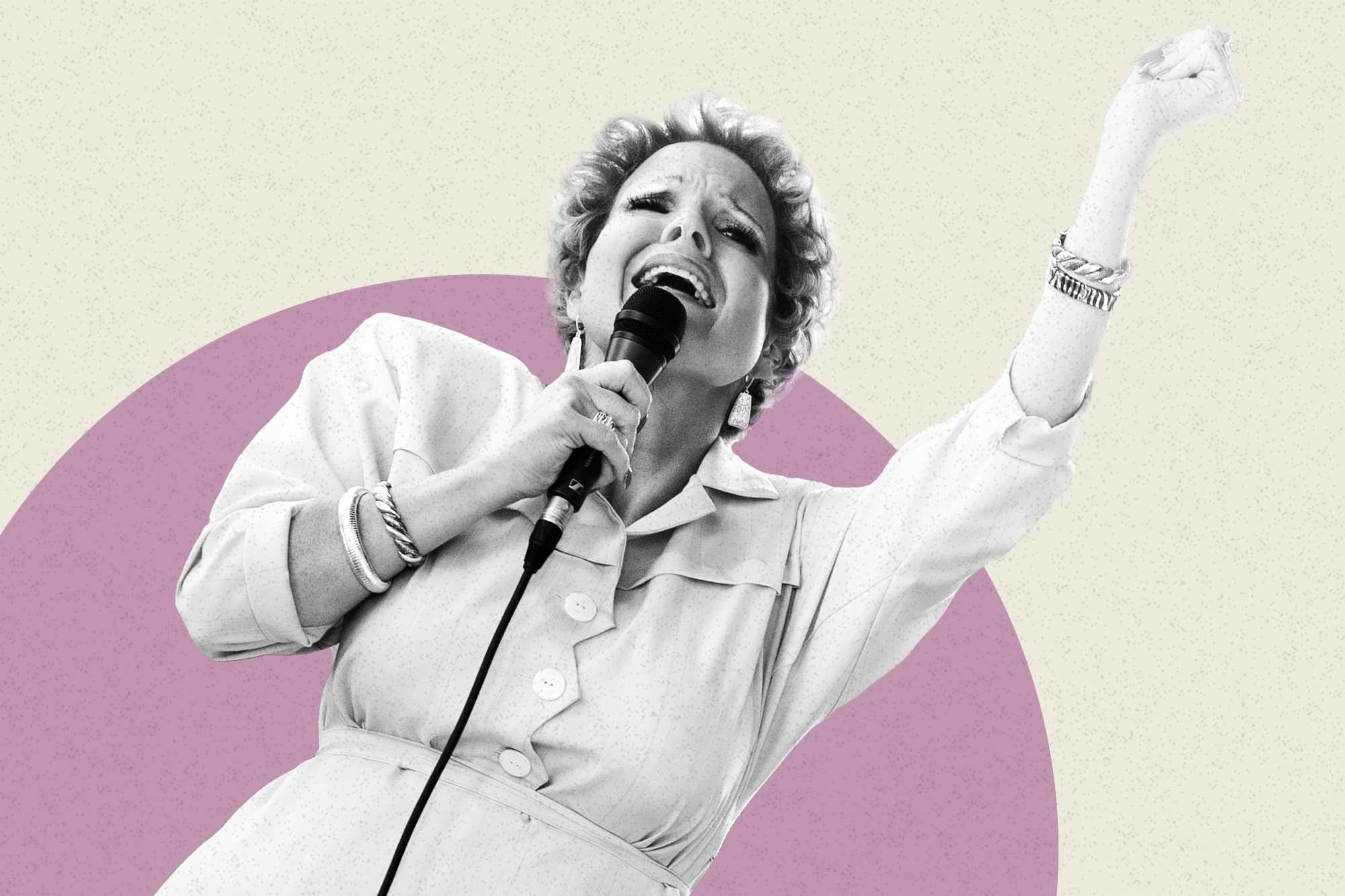 For TV-watchers of a certain age, there’s no mistaking anyone for Tammy Faye Bakker — the 1980s-era evangelical megastar whose trademark false eyelashes and heavy-with-a-capital-H eye makeup served as neat visual metaphors for that era’s prosperity-gospel excess. Still, Academy Award nominee Jessica Chastain gives a valiant effort in “The Eyes of Tammy Faye,” the biopic of Bakker released this weekend to middling reviews but widespread acclaim for her performance.

For those either too young to remember or with minimal exposure to evangelical pop culture, the real-life story they play out is typical of the era’s tabloid excess, chronicling the televangelist Bakkers as they built their empire and then lost it all in a frenzy of financial, sexual and spiritual malfeasance.

The aesthetic trappings of such films are by now familiar: the detail-perfect period setting; the retro needle-drops; the parade of just-recognizable movie stars (hello, erstwhile Spider-Man Andrew Garfield). But even more than those totems of perennial awards-bait historical dramas, “The Eyes of Tammy Faye” bears the hallmarks of a particular subgenre new to American film and television in the past decade. Call it tabloid revisionist history: reconsiderations, through both documentary and fiction, of supermarket icons that add depth and context to the stories of women who have lived for decades in the American imagination mostly as punchlines. (It’s a close cousin to “Wikipedia Theatre,” which provides a more staid recounting of mainstream historical events.)

For decades, that cast of women has been reduced to a series of unflattering, often unfair stereotypes based on reflexive misogyny and the hacky logic of the late-night monologue. Now, a new generation of filmmakers is out to set the record straight. There are biopics of Bakker and Tonya Harding. Miniseries with fictionalized versions of Marcia Clark and Monica Lewinsky. In streaming documentaries, Lorena Bobbitt, in stark contrast to her status as an object of fun for “Saturday Night Live” and its ilk, is revealed as a tragically-ignored survivor of domestic abuse; a star like Britney Spears is reframed not as the rampaging lunatic of her infamous Daily News meltdown, but the long-suffering victim of greedy hangers-ons and careless music industry.

After decades of thoughtless misogyny in media, it’s an understandable — even necessary — penance. But in applying our modern cultural lens to past events, we inevitably obscure their complexity.

Take Chastain’s Tammy Faye, for example, depicted as a largely blameless naïf despite leaving her husband’s equally infamous mistress Jessica Hahn twisting at the mercy of the tabloid press, impugning her character and attempting to discredit Hahn’s accusations of rape. Or even someone like Spears, whose martyrdom in the New York Times’ feted “Framing Britney Spears” documentary obscures her own agency, and flattens the late-’90s cultural landscape in a way that ironically infantilizes the star it seeks to champion. (Spears herself posted after its release that she was “embarrassed by the light they put [her] in.”)

Which isn’t to say that a more compassionate reevaluation of such figures isn’t long overdue — especially in the case of someone like Bobbitt, who suffered long-term trauma and abuse, and attempted to downplay her tabloid fame as much as possible. Applying current-day social norms to past events, however, is a fraught process. It can result in a picture just as simplistic as, if ostensibly more noble than, the one previously held in the cultural imagination, instead of the richer, fairer, and ultimately more humane understanding that distance and perspective might otherwise deliver.

The highest-profile of the bunch is still overall its most commercially and critically successful: “I, Tonya,” the 2017 film from Australian director Craig Gillespie that revisits the Tonya Harding-Nancy Kerrigan scandal that rocked the figure-skating world of the 1990s. In it, Gillespie uses a distanced, somewhat ironic approach that’s equal parts mockumentary and loving Scorsese tribute to retell one of the most ready-made tabloid scandals of the era, laced as it was with issues of class, gender and top-flight athletic competition.

The overall result is somehow both purposely goofy — sending up both the tacky excess of the late Reagan era and Harding’s working-class earthiness — and confrontationally disturbing, as it depicts her years of physical and emotional abuse at the hands of her mother and husband. The approach heightens the impact of both, treating its subjects humanely but without sentimentality — even, or perhaps especially, in the case of Harding’s tyrannical husband, portrayed in a career-best performance by Sebastian Stan as a man lost in the abyss of his own pathetic insecurity.

Of course, even a film that mixes the sweet with the sour as skillfully as “I, Tonya” isn’t immune to Hollywood’s narrative demands. After the film’s release, Christine Brennan, the veteran sports journalist who covered the real-life saga for the Washington Post in 1994, reminded viewers in her column that Harding “gave information about Nancy’s Cape Cod training rink to the ‘hit men’” who assaulted Kerrigan at the request of Harding’s husband, “and later pled guilty to the felony of conspiracy to hinder the prosecution.” As satisfying and unusually savvy as “I, Tonya” is, it’s not quite willing to truly reckon with the role Harding played in her own downfall, and one wonders how much more compelling (or challenging) such a film might have been.

Re-imagining a personal history is one thing. There’s another degree of difficulty entirely when such a figure becomes a stand-in for an entire cultural era or phenomenon, as frequently occurs within this new genre. Take, for example, the titular pop star of “Finding Britney Spears”: The Emmy-nominated documentary from the Times does valuable, fascinating work in questioning members of the star’s inner circle and interrogating the series of events that led to a bizarre, yearslong conservatorship dispute with her father.

But it turns mawkish and self-contradictory when placing her in a snide and misogynistic late-1990s pop culture: Was Spears the perfect victim for that era’s imperial, extractive music industry, or the quietly shrewd mogul of her collaborators’ telling, with which the documentarians obviously sympathize? (A 2003 Esquire feature reveals that the answer was likely “both,” as Spears submits to an undeniably pervy cover shoot while declaiming, savant-like, a remarkably modern conception of feminine sexual empowerment.)

Where those tellings might have been flawed in their ambition, “The Eyes of Tammy Faye” suffers from its staid traditionalism. The film is based on a 2000 documentary of the same name from Fenton Bailey and Randy Barbato, two of RuPaul Charles’ creative collaborators, and its treatment of Bakker borders on North Korea-style hagiography. (The film was part of her first public re-invention, as a camp icon and unlikely champion for the LGBTQ community in the 1990s; her full participation gave Bailey and Barbato plenty of access but little room for actual scrutiny.)

Chastain, who clearly shares their affection for Bakker, purchased the documentary’s dramatic rights in 2012 and has been attempting to bring the project to the screen ever since. The effort shows: Chastain’s performance is virtuosic, and feels lived-in in a manner that’s rarely achieved in such prestigious biopics. The world of TV-era, old-time religion the film depicts rings true to anyone with even limited exposure to it.

But the film is a painfully conventional biopic, to the point where it occasionally recalls nothing so much as the semi-forgotten 2000s comedy gem that parodied the genre, “Walk Hard.” The predictable narrative beats blunt much of the film’s emotional impact, outside a few scenes where Chastain taps into her alter-ego’s unfathomable guilelessness. One of those recreates Bakker’s controversial — and authentically bold for its time — 1985 interview with Steve Pieters, an out gay reverend living with HIV during an era when public health authorities had only begun to acknowledge the pandemic. It’s an almost line-for-line, shot-for-shot real-life reconstruction of the interview — as are numerous scenes in the film that directly recreate footage from the 2000 documentary, to mostly lesser impact.

Given that fidelity, the film curiously skimps on the events that made the Bakkers most famous to a secular audience: the audacious financial crimes that earned Jim a sentence of 45 years in prison, and his rape accusation by Jessica Hahn that poured tabloid gasoline on an already-raging fire. While the national media classed her as part of the “Year of the Bimbo,” Hahn gave a gut-wrenching interview to Playboy in 1987 where she described the 1980 incident in question during which Bakker and an associate allegedly drugged her wine and forced themselves on her.

We see the aftermath of these events, and the gleeful disdain that late-night comedians, stand-ups and novelty t-shirts heaped on the Bakkers. But for a film otherwise dedicated to unearthing Tammy Faye’s interior life, it’s oddly silent, and even contradictory, regarding her response to either the financial malfeasance or Hahn’s allegations. We see Tammy Faye visiting Jim in prison in 1994 before his parole, sympathetically referring to Hahn as that “poor girl.” In real life, two years later, she described Hahn in her memoir as a “professional” who “knew what she was doing.” There’s no doubt that the historical thumbnail of Tammy Faye Bakker as a tacky, craven bumpkin is incomplete. But so is any telling of her story that doesn’t include this episode, which is just as fraught with questions of cultural misogyny as the rest of it — if considerably less flattering.

People are contradictory, and there are any number of very human explanations for why Bakker would have felt the need to defend her then-ex-husband in print. (By all accounts, Hahn and Tammy Faye reconciled by the time of the latter’s death in 2007.) But we don’t see any of that in the film, which gives the entire endeavor an odd cast when one considers that a figure like Hahn was just as much maligned and could sustain, and deserves, just as much of a re-evaluation as Bakker.

Of course, the film isn’t titled “The Eyes of Jessica Hahn.” But the asymmetry between the charity afforded one woman while obscuring her messy relationship with the other illustrates the difference between getting one’s history correct and setting the record straight. The former is far more difficult, and sacrifices emotional payoff for accuracy and insight — while the latter, for all its potential virtues, runs the risk of distorting history in much the same way as our original, naïve misconceptions.

Social norms, especially as expressed in media and pop culture, have changed at a dizzying pace in the two decades since the original “Eyes of Tammy Faye” was released. The documentary was ahead of its time in that way; so were its flaws. The tabloid revisionists’ implicit, or frequently explicit, social critique shouldn’t be ignored. But neither should the messy details that tend to complicate these stories, and reveal how infrequently reality accords itself to those norms.