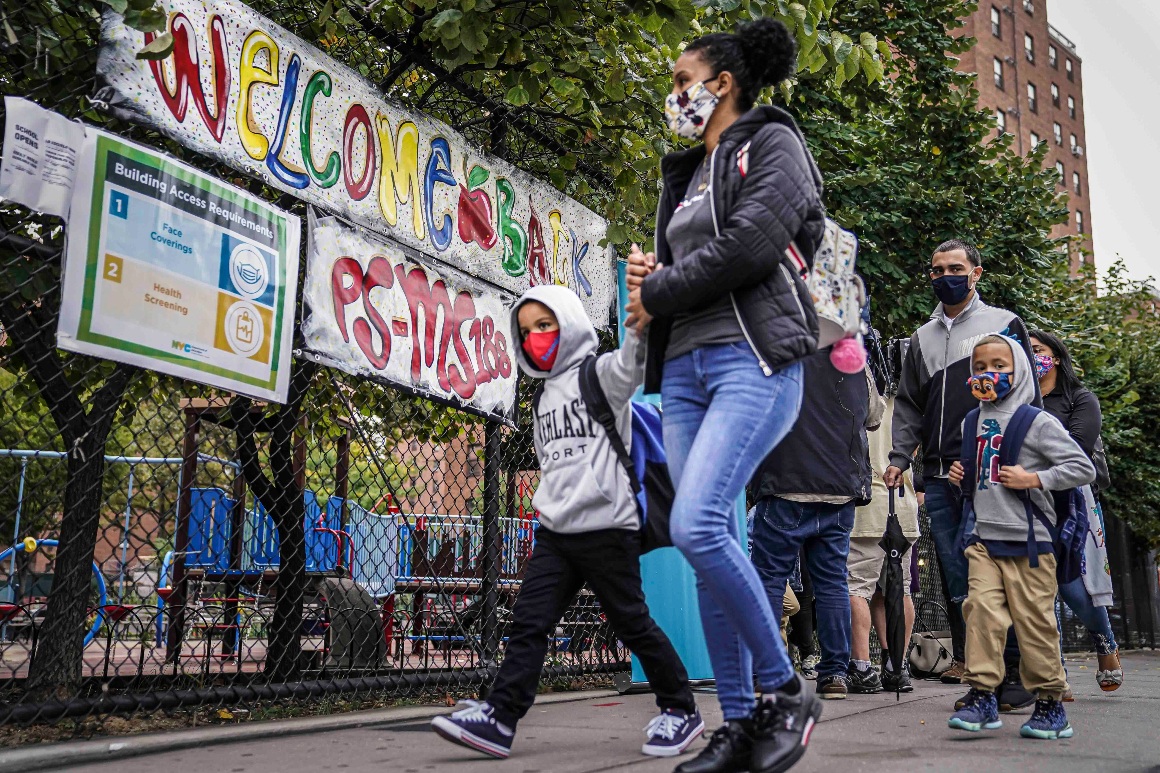 The return of students to classrooms Monday marks a history-making moment for New York City and will be a defining element of Mayor Bill de Blasio’s legacy.

But it’s not happening without a fight.

For weeks, parents, teachers and labor leaders have urged the mayor to allow a remote option for students and teachers and he has refused to entertain the notion. The mayor’s stance is that getting kids back in front of teachers is a crucial goal — not only for the welfare of students who have endured significant learning loss since the pandemic shuttered schools in March 2020, but for the recovery of the city as a whole.

The teachers’ union joined a lawsuit Friday with other labor leaders seeking to drag City Hall to court over its haste in bringing staffers back to work. That followed weeks of recriminations from the United Federation of Teachers, who forced the city through arbitration to make medical and religious allowances for some teachers, who are otherwise mandated to receive a vaccine or be removed from payroll.

But behind the political and legal battles, parents are voicing deep anxiety over what they say are inadequate safety protocols and growing concerns about the Delta variant.

Those families — many of whom are families of color and low-income parents who enrolled in in-person learning at low rates last school year — are organizing a safety strike until the city provides a fully remote learning option for all families who want it.

“All the safety precautions that are supposed to be in place prior to our children entering the school buildings are still not there and the mayor and the chancellor continue to gaslight New York City parents over and over and over again — way worse than they did even last year,” said Paullette Healy, a member of Parents for Responsive Equitable Safe Schools, or PRESS.

They criticized the city for planning to test just 10 percent of individuals in a school population biweekly and not indicating how many positive cases would trigger a schoolwide shutdown. Questions also remain about its plans for remote learning in the event that students have to quarantine, potential staffing shortages and schools’ ability to meet the three-feet social distancing requirement.

They said many families have been rejected for an option the city is offering to parents whose children have medical conditions and expressed concerns about consent for testing now being optional given that elementary schoolchildren aren’t vaccinated.

Healy is keeping her 14-year-old son and 12-year-old child, both fully vaccinated, home this week. She also said her child’s school did not have any counselors or social workers in her “Summer Rising” program when her daughter was dealing with anxiety. The program was designed to help kids prepare for the classroom and make up some ground after a school year of mostly remote learning.

She said her group received roughly 700 letters from parents who aren’t sending their kids, and another 150 who applied for medical accommodation but got rejected. So far, 6,485 parents signed a petition requesting the reinstatement of a remote option.

Asked about their latest conversations with the DOE and City Hall, Healy said the department insisted the three-feet social distancing rule will be observed and testing will occur whenever possible. But there’s no followup or oversight, she said, and it’s unclear what repercussions employees who don’t submit proof of vaccination by the Sept. 27 deadline will face.

“That’s the most frustrating thing,” Healy added. “The DOE will put out soundbites and guidelines but there’s no one to implement and it’s left to the parents to figure it out and the only logistical option that we parents have [is] to keep our children home. It’s the only source of control we have right now.”

As of Friday, 76 percent of DOE employees and 66 percent of youth between the ages of 12 and 17 have been vaccinated, according to the DOE.

The reticence to return to in-person learning echoes similar anxieties at the height of the pandemic last year, particularly among families of color. Black and Asian families enrolled in in-person learning at lower rates in the previous academic year, expressing a lack of trust in the city’s ability to keep schools safe and a lack of engagement with impacted families.

Harris — who’s keeping her 11-year-old daughter at home as she’s unemployed and can help her — claimed a lot of DOE central staff know the city’s not ready “but have to follow their leader” while the DOE is asking families to trust them.

“They’re working with us doing the best they can which leads us to believe that it all falls down on the mayor,” she added.

She said her daughter initially enjoyed the Summer Rising program but they stayed in the same classroom the whole time and didn’t take any trips. She also struggled with remote learning last school year.

The families say a remote option would permit the DOE to prioritize children who need in-person learning like students with disabilities, students in temporary housing and students who suffered academic loss from Covid-19. They said schools are doing the best they can to provide information but that they’re not always receiving information from the DOE.

Earlier this year, Schools Chancellor Meisha Ross Porter — who’s beginning her first full school year and facing what is likely the biggest test of her educational career — said some communities didn’t feel like they were included in discussions about reopening school buildings, citing trust in keeping schools safe, and even some of the challenges she and her husband faced when making a decision about sending their goddaughter to school.

In an interview with NY1 last week, Porter defended the plan to test 10 percent of a school’s population biweekly, noting the state has signaled its approval of the city’s testing protocol. She also called the vaccine a game-changer and insisted there would be limited school closures as long as the city follows its protocols.

“We also have the ability to pivot and increase testing at any moment,” she said. “So we’re ready.”

She maintained the benefits of in-person learning outweighed the risks and said there would be options for families in medical need.

“I’ve heard a lot from our parents who have students who have medical conditions that make them concerned about not being vaccinated and so the option is open to apply for that,” Porter added. “We’re looking forward to using this as a moment to really build out home instruction, medically fragile instruction, bring in what we learned from the pandemic about remote learning.”

Advocates also said some families are afraid to keep their kids at home over fears of facing punitive consequences.

The city said that if a parent isn’t ready to send their kids back to school, they will keep talking to them to try to convince them. But Porter said that if the families keep their kids at home for a while, they would contact the Administration for Children’s Services if there’s “a clear intent to keep a child from being educated, period.”

She repeated those sentiments during a recent Chancellor’s Parent Advisory Council meeting.

“We are not threatening families with ACS,” she said. “In fact, we have been in communication with ACS because neither ACS nor the DOE want to police families and recognize that this is a very fragile moment.”

Working parents who are unable to keep their children at home have also expressed concerns about safety in school buildings. Those families have cited factors such as being essential workers, having family members who are medically fragile that run the risk of dying if their children bring Covid-19 home and non-school-aged children who could catch the virus from their siblings.

East Harlem parent Rosa Diaz said she wishes the DOE had planned ahead and come up with a hybrid model but says she has no choice but to send her kids back.

“I’m a working parent and I have to go to work. If I don’t work, I don’t make money and then I can’t support my kids, pay rent and provide food,” she said.

“I am not happy with all in-person,” Diaz added. “All the students are going to come back and it’s no longer going to be 12 kids in the classroom. The classrooms are not huge either. I am very concerned with when it comes to distancing and when it comes to sanitizing the schools.”

She’s bringing her kids to school on Monday. While she said her school has been communicating with families on a daily basis, she’s uncertain it will be safe.

Families and advocates wary of schools reopening without a remote option in place say they’re exploring their legal options and are speaking to lawyers about what grounds they have to sue the city for not offering a remote option.

“We know that there are plenty of lawsuits coming down the pipeline and then we are planning to boycott … the mayor and the chancellor are sadly mistaken if they think that we’re going to take this lying down, not to mention all the elected officials that we have [calling for a remote option],” Farah Despeignes, president of the Bronx Parent Leaders Advocacy Group and Community Education Council 8, said.

The DOE referred to its back-to-school family forum series, an information session for Spanish-speaking families about school reopening and five-borough family engagement forums in May. The department also pointed to a study showing in-person learning in city public schools was not linked to increased rates of COVID-19 transmission — indeed when the city brought a cohort of students back last year the transmission rates were far lower than the city at large.

“Our young people cannot lose another year of in-person learning, which is why we are welcoming all students back on Monday,” Sarah Casasnovas, a DOE spokesperson, said in a statement. “We’ve been engaging with parents throughout the spring and summer to help answer their questions and share critical information about our full reopening, and we will work with each family to ensure that their children safely return to school.”