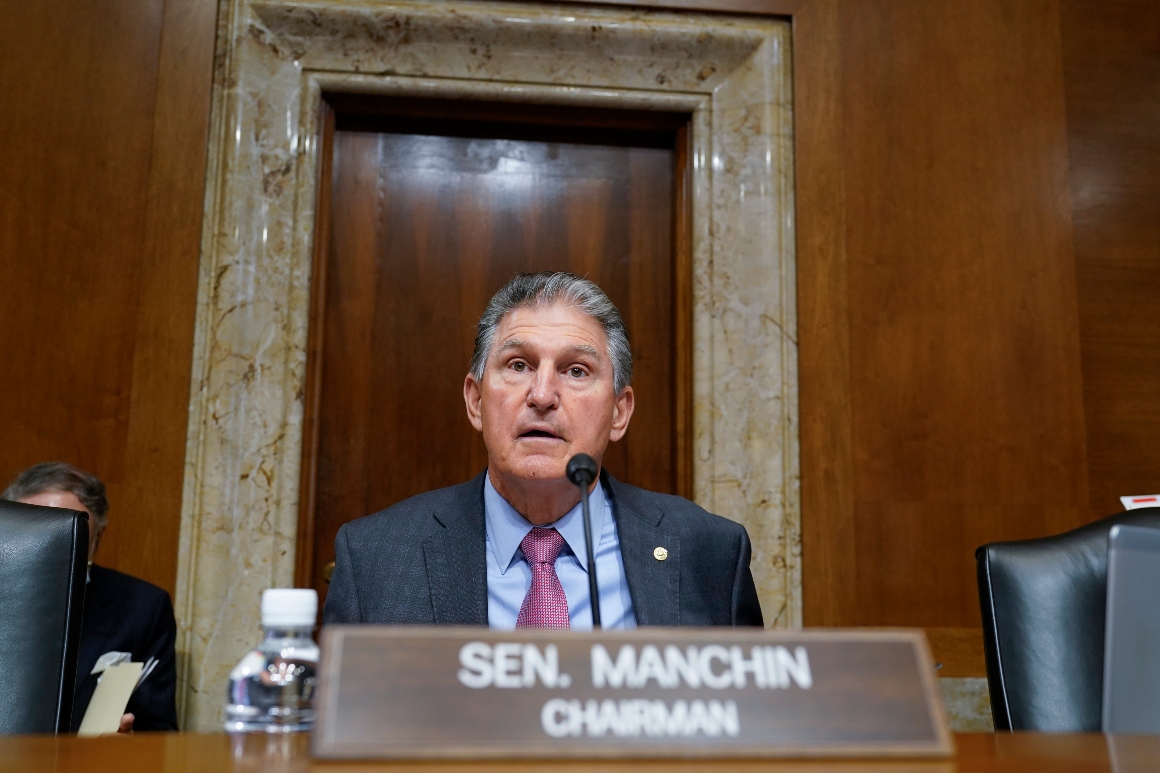 The president wants Manchin and other holdouts to find a top-line number they are comfortable with for the transformational spending bill that will run into the trillions of dollars, but Manchin isn’t yet ready to give one. His colleagues hope he will single out which provisions in the social spending program that he wants to ax so they can begin negotiating in earnest, but he’s in no rush to do so.

Instead, Manchin sees the current state of spending programs in good shape through the end of the year, when the expiration of the expanded child tax credit could force more action in Congress. And so even as the House looks to vote on a reconciliation bill totaling into the trillions as soon as next week, they are unlikely to have Manchin’s blessing anytime soon.

“What’s the need? There is no timeline. I want to understand it,” Manchin said in an interview on Thursday as he walked to his office. “I don’t think anything runs out. Right now, we’ve got good nutrition for children, a lot of things are covered right now clear [into] next year.”

The idea of a bicameral deal on reconciliation ahead of Monday’s House vote on the bipartisan infrastructure bill seems unlikely at best. Democrats need all 50 of their members to vote for a bill in the Senate, which allows Manchin to dictate the pace on a bill expected to raise taxes on the wealthy, expand child care problems, fight climate change and increase access to education.

But even as the West Virginian takes his time, there is good news for Democrats worried that Biden’s agenda could fall apart amid warring liberal and moderate factions over the size and scope of the legislation. At his core, Manchin seems relatively committed to getting something done instead of fighting to stop the reconciliation bill altogether.

“I don’t think Joe is unworkable, I think, look he’s fiscally conservative, OK? So, $3.5 trillion is a lot of money, it shakes into his soul,” said Sen. Jon Tester (D-Mont.). “We can get to a point where we’re all happy. Maybe not tickled, but happy.”

Already, there are subtle signs of movement in Biden’s direction. Manchin acknowledges his idea of a “strategic pause” is not accepted by his colleagues, so he understands he and the other 49 senators in the Democratic Caucus need to keep moving forward, even if the pace frustrates those looking for quick action.

“I’ve always said pause. I thought because this is such a big thing. Right now I can tell they’re not moving for a pause and looking for a pause,” Manchin said. “I don’t know what the time frame is, but I want to understand it right now before I do anything.”

Manchin was also confronted by an activist during the interview, who asked for his vote on reconciliation. Manchin was noncommittal but buoyed by the activist’s polite approach, saying, “See? Positive. Everybody’s positive.” He is now frequently approached as he walks across the Capitol grounds by passersby, who are eager to give him either a personal word of encouragement or try and change his mind. A shirtless man yelled at Manchin earlier this month, encouraging Manchin not to “make us go broke.”

And Manchin has been the subject of intense lobbying, from his own colleagues at Senate leadership huddles and during two meetings with Biden in recent days. He says most of it will be ineffectual, even as Democrats privately grouse that Manchin is delaying the inevitable give-and-take of negotiation.

Senate Majority Whip Dick Durbin (D-Ill.) isn’t actively whipping him, and Senate Majority Leader Chuck Schumer, who has been close to Manchin for years, recently made a point of praising the West Virginia Democrat on the Senate floor for his work on voting rights.

“Everybody knows me pretty well. My mind is my mind, not theirs,” Manchin said. “I wouldn’t think I could do anything to change their minds. I think Bernie [Sanders] is sincere, he has a very social mindset and he is who he is to the core. I hope he’ll respect me. I’m not anywhere near that.”

Some of his colleagues think Manchin could cut a deal as soon as next week, others say that’s a pipe dream. Sen. Bernie Sanders (I-Vt.) said he had “no idea” if he could reach an agreement with Manchin in the coming days.

“I’d be surprised if he cut a deal that allowed him to do it this fall,” said Sen. John Cornyn (R-Texas). “He’s been consistent.”

For Manchin, being noncommittal but open to moving forward is a signature position for him — he often doesn’t like to be nailed down until the hour of the vote. The coal state senator has repeatedly raised questions about the party’s pursuit of clean power technology, saying in the interview he worried about not having energy “reliability” in future years.

Sen. Kyrsten Sinema (D-Ariz.), who is often aligned with Manchin, has given Democrats more to work with than Manchin. She told the Arizona Republic she favors climate provisions that Manchin dislikes.

One Democratic senator, granted anonymity to speak candidly, said that Sinema and Manchin are taking “almost opposite” approaches when it comes to Democrats’ social spending plan, even as they remain the most stubborn holdouts.

“Kyrsten recognizes there’s a timeline, there’s got to be a process,” the senator said, whereas Manchin is “coming at it from a values perspective first and saying ‘I am happy to support this or this or this but not in this way or not at this time.’”

“What I would like from both Joe and Kyrsten, I would like them to identify the problematic areas particularly in the American Families Plan, what they support. And then we can talk about how much should go into these program areas,” Hirono said.

Despite Manchin’s concerns with the social spending package, Democrats expect he’ll eventually get on board, citing his vote this spring for the $1.9 trillion coronavirus relief package and his more recent work on elections and ethics reform. While Manchin said he wouldn’t support Democrats’ signature elections bill — even going so far as to write an op-ed explaining his concerns — the West Virginian eventually worked with Democratic senators to develop an intraparty compromise.

“None of us like artificial deadlines and he doesn’t make a decision before he needs to,” said Sen. Tim Kaine (D-Va.), who worked with Manchin on voting rights. “When we need him, he’s there. And I would be surprised if that were any different this time.”