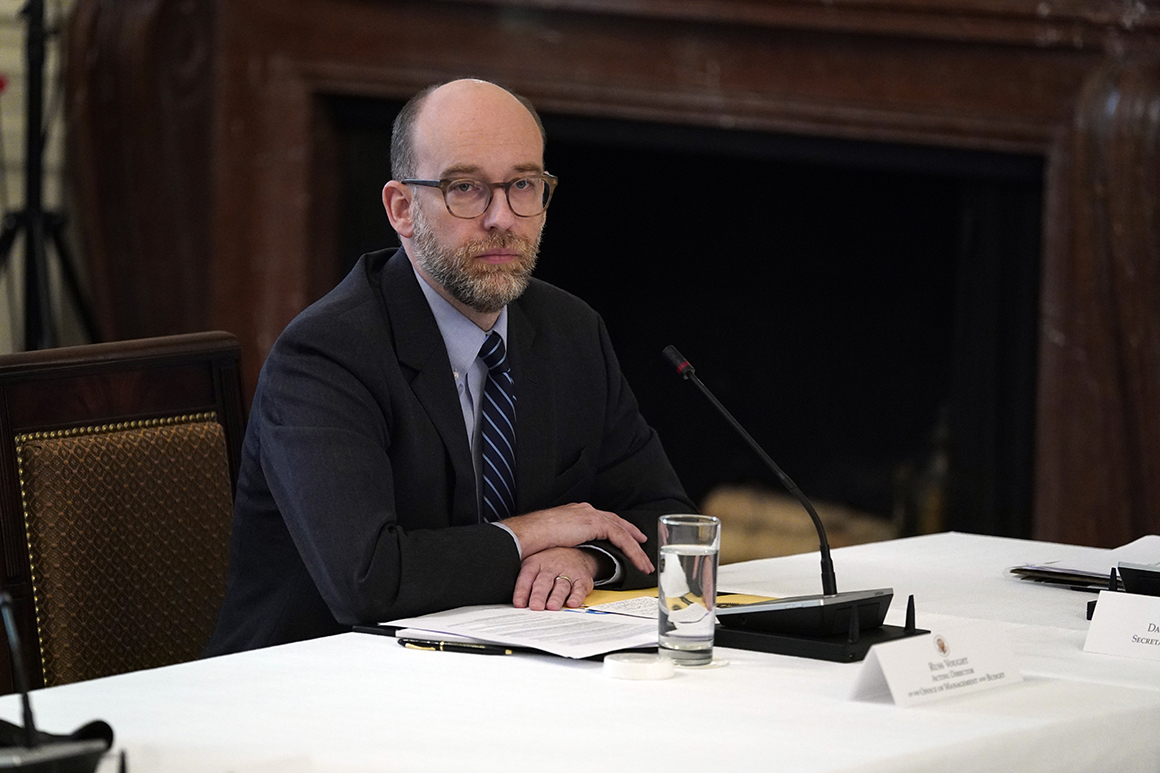 The Biden White House has begun the process of removing Trump allies from military advisory boards, months after they were installed into those posts at the end of the last administration.

On Wednesday, Cathy Russell, the director of the White House’s Presidential Personnel Office, sent letters to 18 individuals on three different boards, asking for them to resign. The list includes the Board of Visitors to the Air Force Academy, Military Academy and the Naval Academy, the White House said.

In one letter to Russell Vought, the former director of the Office of Management and Budget in the Trump administration, Russell advised him that he’d be fired from his post on the Naval Academy’s board of visitors unless he chose to resign.

“On behalf of President Biden, I am writing to request your resignation as a Member of the Board of Visitors to the U.S. Naval Academy,” Russell wrote, according to the letter that Vought subsequently posted on Twitter. “Please submit your resignation to me by the close of business today. Should we not receive your resignation, your position with the Board will be terminated effective 6:00 p.m. tonight.”

Vought, who earlier this year founded the Center for Renewing America, tweeted out his refusal to comply. “No,” he responded. “It’s a three year term.”

John Coale, a top Washington lawyer, who was also appointed to the Naval Academy board by Trump on Jan. 5, was also removed and said in a text message he was “pissed off” he was fired, adding that he never even got to go to a meeting.

Other former Trump officials appointed to similar boards were also threatened with firing on Wednesday, such as former national security adviser H.R. McMaster, lobbyist David Urban and retired Gen. Jack Keane, according to one of the fired board members. Later this week McMaster is getting honored by West Point’s Association of Graduates as a Distinguished Graduate of the academy.

Keane said in a text message that it was “very disappointing that President Biden is not upholding the previous president’s appointments which has been pretty much the tradition.”

Meaghan Mobbs, an Afghanistan veteran who was also asked to resign from the West Point board, tweeted her reply to the White House: “I find this whole act unconscionable and not all in the spirit by which this Administration promised to govern. President Biden ran on a supposed platform of unity but his actions speak directly to the contrary. Apparently, unity is only for those who conform.”

When asked if he received a similar letter, Sebastian Gorka, who was named by Trump to the National Security Education Board, only replied to a text message by saying: “Hey CuckBoy go lick some Democrat’s boots.” A former Trump official who was named to a military academy’s board of visitors said he hadn’t received such a letter.

CNN and the Army Times both first reported the news of the potential firings. (CNN reported that former White House press secretary Sean Spicer was also asked to resign. Spicer told POLITICO he would respond to the news on his Newsmax show on Wednesday night.)

Vought’s insistence that he will serve out his term sets up a potentially dynamic legal and political battle over a largely ceremonial position.

The Biden White House has been exploring ways to remove other Trump officials since they took over. The Pentagon moved quickly to suspend some of the appointments, and in March the Department of Homeland Security fired all the members of its advisory council. But, early on, there was a determination that their hands were tied in certain circumstances.

Biden’s power to remove officials at independent agencies was bolstered by a Supreme Court ruling in June which said that the leadership structure of the Federal Housing Finance Agency was unconstitutional because it didn’t allow a president to fire its director at will, only for cause. With that ruling in hand, Biden removed Trump appointee Mark Calabria from the FHFA and installed its preferred pick.

But in other instances, it has not been a smooth process. The administration removed Roger Severino, a former Health and Human Services official, from his post on the council of the Administrative Conference of the United States, which he was given in the final days of the Trump administration. Severino subsequently sued Biden saying that he had no constitutional power to terminate him, and the case remains in litigation.

Prior to leaving office, Trump stacked a number of boards with loyalists as a reward, including former impeachment lawyer Pam Bondi for the Kennedy Center for Performing Arts, senior adviser Kellyanne Conway for the Air Force Academy board of visitors, and Matt Schlapp for the Library of Congress Trust Fund Board. He also put three former aides on the Holocaust Memorial Museum’s board: former body man Nick Luna, former acting director of national intelligence Ric Grennell and former White House aide Andrew Giuliani.

With reporting by Sam Stein