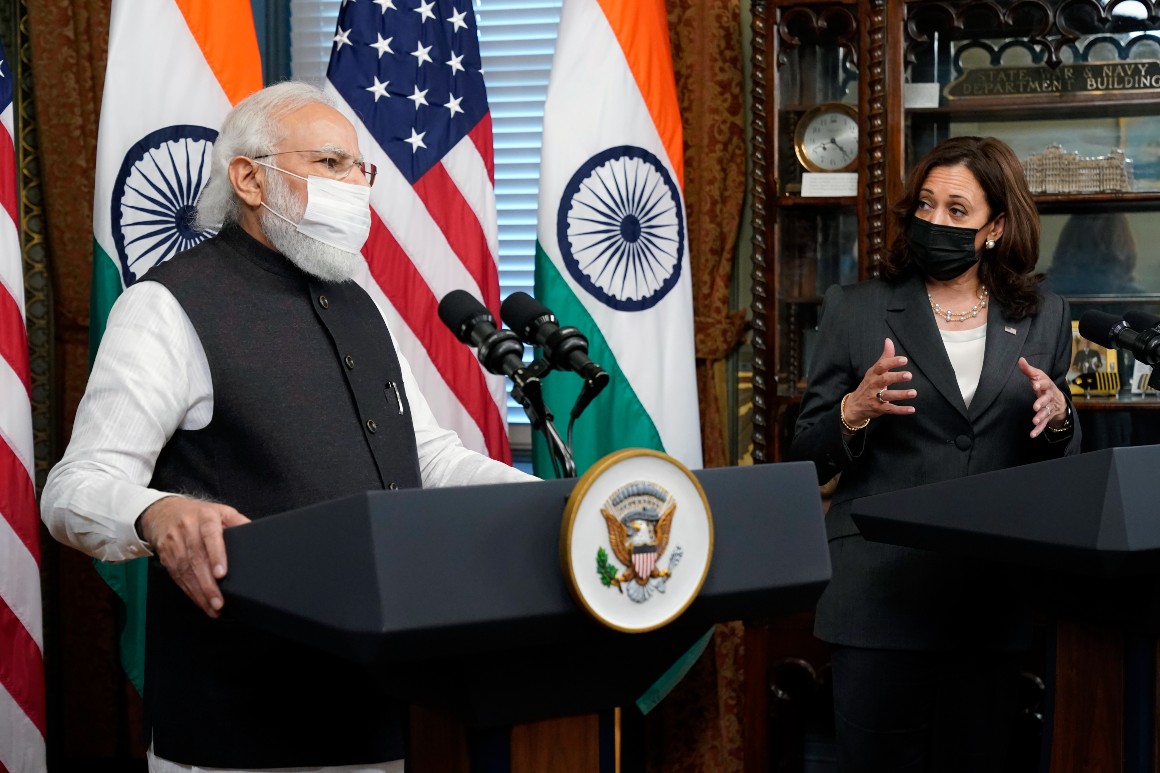 India’s prime minister is in Washington this week for a coveted White House meeting. But Narendra Modi’s Hindu nationalism and his country’s backsliding on human rights and democracy are creating a problematic alliance for President Joe Biden.

Modi, a favorite friend of former President Donald Trump, will meet Biden on Friday along with the leaders of Australia and Japan. The four countries make up the “Quad,” a grouping Biden is trying to elevate in a broader effort to stand up to China.

While the members of the Quad all are democracies, India’s was recently downgraded from “free” to “partly free” by Freedom House, which slammed Modi’s government for everything from harassment of journalists to attacks on non-Hindus.

Yet not only have Biden administration officials kept their public criticisms of Modi to a minimum, they’ve even engaged in outreach to Modi allies known for their extreme views.

Earlier this month, the top U.S. diplomat in New Delhi met with the leader of an Indian organization notorious for its often-violent promotion of Hindu nationalism. The U.S. envoy, Atul Keshap, was reported to say afterward that he’d had a “good discussion” with Mohan Bhagwat, chief of the Rashtriya Swayamsevak Sangh, a movement with paramilitary elements that intimidate Muslims and other non-Hindus. Keshap said the pair spoke of how “India’s tradition of diversity, democracy, inclusivity and pluralism can ensure the vitality and strength of a truly great nation.”

Those remarks did little to reassure longtime observers of the Washington-New Delhi dynamic, who fear it’s all part of a broader willingness of the Biden administration to look away from the Modi government’s abuses despite U.S. influence on the country. 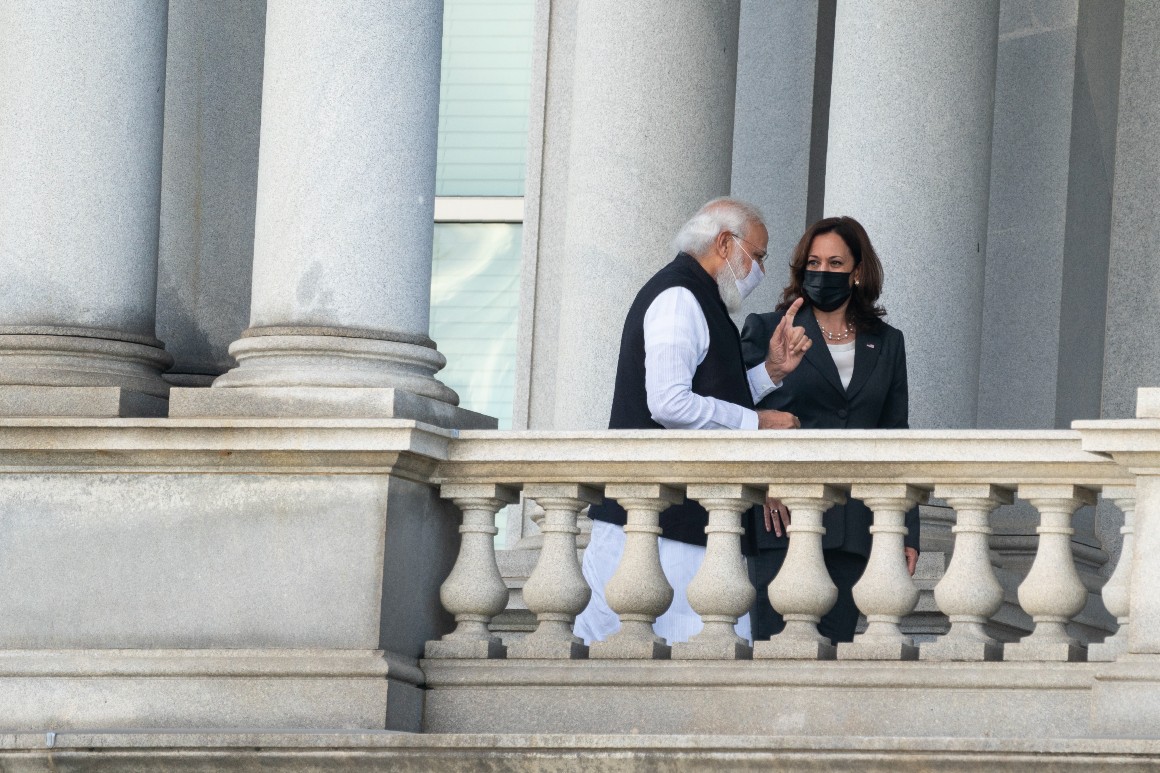 “Why is the Biden administration so mute on India’s human rights situation? Why are U.S. officials pulling their punches? What is the strategy?” asked John Sifton, Asia advocacy director at Human Rights Watch. “The U.S. is a vital partner to India, in trade, diplomacy and military relations — this is leverage that the Biden administration does not seem to know how to measure properly.”

On Thursday, as the Indian leader scored a meeting with Vice President Kamala Harris, one U.S. lawmaker also voiced concern about India’s trajectory under Modi.

“I hope his White House visit includes honest conversations about how the Modi government can ensure India’s democracy remains a democracy for all of its people,” Rep. Andy Levin (D-Mich.) said in a statement.

White House and State Department spokespersons did not offer on-the-record comments for this story. The Indian Embassy also did not respond to requests for comment. Keshap, who was in charge of the U.S. Embassy in India on a temporary basis, has since left the post.

Elevating the Quad, including India, will continue to be a priority, a senior Biden administration official said Thursday in a written statement.

“The Quad is a model for how much of our statecraft in Indo-Pacific will look going forward,” the senior official said. “It’s about bringing together allies and partners together in a flexible, fit-for-purpose configuration.”

Biden administration officials have said they do not have blinders on to India’s troubles. Instead, they argue that when it comes to a country of 1.4 billion people that is geo-strategically vital — especially when it comes to holding a rising China at bay — they prefer to level their criticisms behind the scenes.

“Public admonishment is the appropriate tack under certain circumstances, but in other circumstances the private approach is what’s really going to do the most good,” one senior official recently told POLITICO in describing the administration’s overall strategy on human rights.

That worries other U.S. officials who argue that there’s little evidence that the overall human rights and democracy atmosphere in India is improving.

“We are repeating the Obama and Trump mistake of cozying up to India and Modi without demanding Modi end his tilt towards authoritarianism and start protecting human rights and religious freedom,” a U.S. official engaged in the debate told POLITICO. The official spoke on condition of anonymity because of the sensitivity of the topic.

The U.S. official said Biden administration representatives do voice their human rights concerns privately to their Indian counterparts, but, “I just don’t know that Modi or his party change any behavior because of those conversations.”

Complicating the U.S. calculation, the official added, is that Modi remains popular in India, so there’s “lots of hand-wringing” inside the Biden administration about what to do.

As the U.S. official suggested, Biden is to an extent echoing his recent predecessors.

Modi came into power in 2014, and former President Barack Obama largely embraced him, despite Modi’s record of anti-Muslim sentiment.

In fact, nearly a decade earlier, Modi had been denied a U.S. visa on religious freedom grounds after he was accused of tacitly supporting Hindu extremists attacking Muslims years earlier in the Indian state of Gujarat, where he was chief minister. In 2016, however, Modi’s star had risen so much in Washington that he delivered an address to the U.S. Congress.

Trump, Obama’s successor in the Oval Office, made little pretense of caring about human rights and openly sought favor with the world’s autocrats. He also was keen on countering a rising China. All of that made Modi a particular favorite of Trump’s.

In 2019, Trump attended a “Howdy, Modi!” rally in Houston, Texas, alongside the Indian leader. The following year, Trump visited with Modi in New Delhi. Both events attracted massive crowds. During Trump’s visit, Muslims and Hindus clashed in riots in the Indian capital, but Trump said Modi had reassured him about the situation, and that Modi was working closely with India’s minority Muslims. Trump’s own antipathy toward Muslims — whom he had proposed banning from U.S. soil — made him a favorite of Hindu nationalists.

When Biden ran for president, he trashed Trump’s seeming indifference to suffering around the world, and he promised to put human rights at the “center” of his foreign policy.

But Biden and his team also were clear early on that they saw India as a nearly irreplaceable partner.

Modi was among the first leaders the new U.S. president met with (though in a virtual Quad meeting, due to the coronavirus pandemic). India also was a stop on Defense Secretary Lloyd Austin’s first overseas trip.

Even though the Biden administration was initially largely focused on the domestic challenge of the pandemic, it stepped up to aid India as it faced a brutal wave of the virus during the spring. The Biden administration also supported India and South Africa at the World Trade Organization as they proposed waiving intellectual property protections on Covid-19 vaccines. The administration also pledged early on to “deepen our partnership with India” in a document laying out its national security views.

While building a bulwark against China is a paramount concern for the Biden team, plenty of other reasons also factor into its friendliness toward New Delhi. That includes a desire for Indian leadership in tackling climate change and pandemics.

The U.S. troop withdrawal from Afghanistan and the takeover of the country by the Islamist Taliban militia also promises to have reverberations in America’s relationship with India, a major player in South Asia that is always worried about archrival Pakistan’s actions in Afghanistan.

All of this suggests the Biden administration is unlikely to back off its embrace of New Delhi anytime soon.

Modi hails from the Bharatiya Janata Party, a Hindu nationalist political movement. The BJP’s rise long concerned Indians who worried that the party would erode the tradition of secular democracy in a country with many diverse religious and ethnic groups, including some 200 million Muslims.

Modi’s economic policies have had mixed results, but his improvement of public services for India’s poor have drawn positive reviews, while elections in the country are still considered largely free and fair. But on many fronts, activists argue, India’s institutions and its minorities are under attack.

During a congressional briefing this week, Sifton laid out examples. Among them: The Modi government’s passage of a law that discriminates against Muslims by making religion a basis of citizenship; its revocation of the autonomy granted to the majority-Muslim Jammu and Kashmir region and subsequent crackdown on that state; and the passage in some Indian states of “anti-conversion” laws that appear to target Muslim men who marry Hindu women.

These and other moves are playing out against a backdrop of more violence against religious minorities, crackdowns on government critics and journalists and more, Sifton and others have noted.

Analysts point out that India is a vast, diverse country, and that trying to measure progress or failure on a subject like human rights is challenging if not impossible because not every element moves in the same direction at the same time. Plus, the United States’ own reputation when it comes to democracy and human rights took a hit under Trump, especially in the wake of the Jan. 6 insurrection at the U.S. Capitol, making U.S. diplomats’ job even harder.

Alyssa Ayres, who served as a deputy assistant secretary of State for South Asia during the Obama years, said the Biden administration appears to be striving to find the right balance and that there’s no reason to doubt that it is discussing human rights and democracy with the Modi government, even if privately.

“We should be able to pursue our national security interests while also raising important issues of human rights,” said Ayres, now dean of the Elliott School of International Affairs at George Washington University. 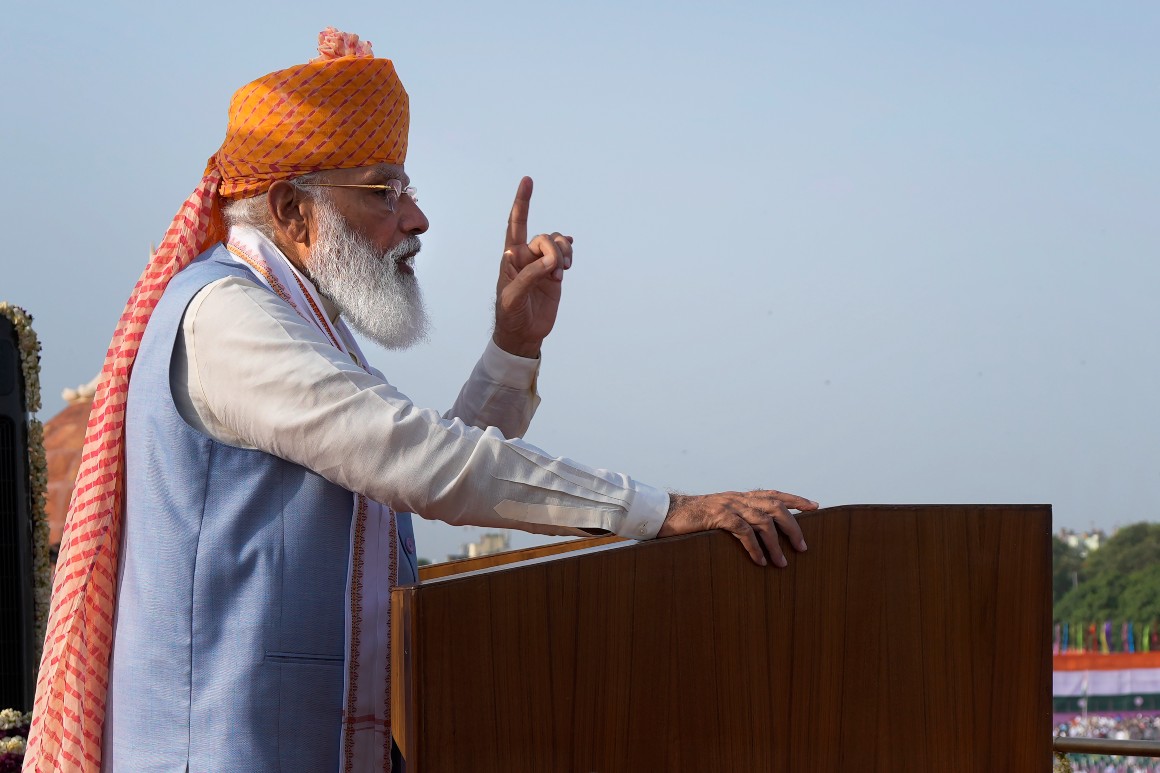 To influence governments, U.S. diplomats often make a point of talking to a broad array of power players in the countries where they are posted. And the RSS is without question a major influence on Modi and the BJP. (If there have been past meetings between U.S. diplomats and RSS leaders, they’ve been largely kept under wraps, though there was a report of at least one such encounter in 2020.)

“U.S. officials meet a wide range of political, business, religious, and civil society leaders in India and across the world,” a State Department spokesperson said in a statement. “We cannot comment on the details of private diplomatic conversations.”

Still, the pro-Hindu approach of the group — whose ideology is referred to as “Hindutva” — is often described as chauvinist, extremist and violent by rights activists. Members of its student wing are accused of attacking professors and others on campuses, while one of its acolytes was the man who assassinated Indian icon Mahatma Gandhi. The group has at times been banned in India.

Keshap’s meeting upset some American Muslim activists, a number of whom plan to protest Modi’s visit to the White House this week.

“Mr. Secretary, given the current religious discrimination and violence facing Christian, Muslim and Dalit minority groups in India, it is critical the United States not legitimatize the RSS and those perpetuating violence against minorities in India,” states the letter, a copy of which was obtained by POLITICO. “It is critical that we hold not only our foes but our allies accountable when it comes to our long-cherished values of religious freedom, justice, equality and rule of law.”