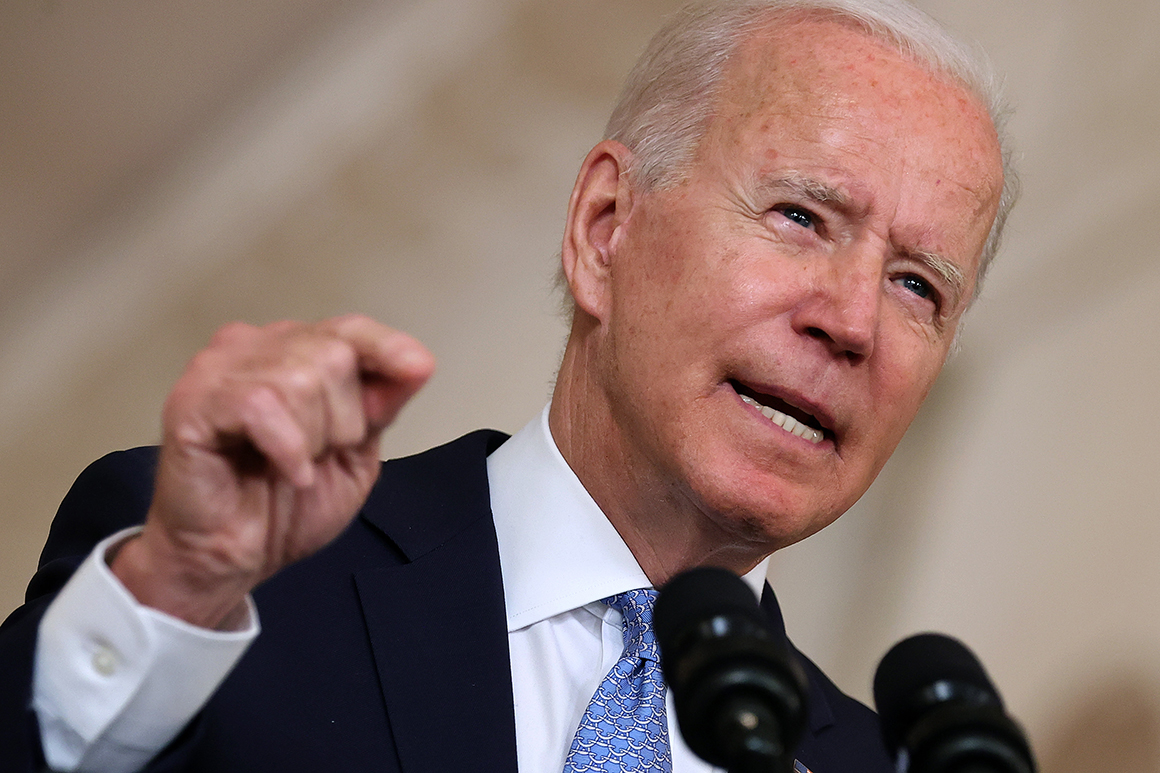 But the White House has been vague about what the president would, or could, do in the near term. And some abortion rights advocates are calling for a more clear-cut strategy in the wake of the court’s latest move.

“This extreme Texas law blatantly violates the constitutional right established under Roe v. Wade and upheld as precedent for nearly half a century,” Biden said in a statement.

Biden added that his administration “will protect and defend” the right established under Roe v Wade, but did not explain what steps, if any, the White House would take. Abortion rights advocates have been in close touch with the White House and Congress and are urging the two branches to develop a strategy in response, particularly as the high court prepares to formally revisit and potentially overturn Roe v. Wade later this year when it hears arguments on Mississippi’s 15-week abortion ban.

The Texas state law took effect early Wednesday morning after the Supreme Court decided not to act on an emergency petition from Texas abortion clinics to put the new rule on hold. The new law not only bans abortion after six weeks of pregnancy, but it also allows Texas citizens to sue abortion providers or anyone who helps facilitate the procedure after six weeks.

Though the Supreme Court could still block the state’s law in the coming days, the Wednesday decision renewed calls for changes to the makeup of the court, and questions about what steps the White House and Democrats could take — if any at all.

Pressed on what the administration plans to do, White House press secretary Jen Psaki said any action by the Justice Department in response to abortion laws will be made independently by the department. Psaki added that the president would continue to call for the “codification of Roe,” through Congress.

But some Democratic lawmakers admitted that legislation to enshrine abortion access is unlikely to garner enough support in the evenly split Senate.

“It’s important for the White House to weigh in…we really are going to need their help to get the votes on the Senate side,” said Chu. “We will need to have all resources available but especially the most powerful voice in land, and that is our President Biden to weigh in on this.”

Biden’s statement was sharply critical of the new law, saying it would “significantly impair women’s access to the health care they need, particularly for communities of color and individuals with low incomes.” Many progressive lawmakers and advocates, who have been frustrated with the administration for not being more vocal on the issue up to this point, welcomed what they viewed as a shift in tone.

“It’s the first time that the word ‘abortion’ has been issued by the by the president’s office,” said Rep. Carolyn Maloney (D-N.Y.). “And the White House has to continue to take an active role in preserving abortion rights in the United States and harness all resources to call for pass The Women’s Health Protection Act and the elimination of the Hyde Amendment.”

Psaki said the president would continue to “push” Congress to act and said there’s “no question” White House officials will be discussing responses to the decision in “conversations with members” and congressional staffers.

But even if the Democratic majority in the House were to pass legislation codifying abortion access, the Senate presents a major barrier.

“Can we get to 60 in the Senate? I don’t know,” said Rep. Jackie Speier (D-Calif.), who said the Texas decision effectively “tells a woman that she has no control of her body.”

“Every man who impregnates one of these women should have you-know-what taken off,” Speier quipped. A future decision by the Supreme Court is the best chance of recourse, said Speier.

“[And] the extent to which the courts do not stand up to this probably means the rethinking of the Supreme Court as we know it today,” she added.

A growing number of Democrats have called for changing the number of justices on the Supreme Court to counter its conservative bent, but Biden opposed the idea during the presidential campaign.

The president “will wait” to hear from a Supreme Court reform commission the White House established earlier this year before making any changes to his position.

It also remains unclear if the Justice Department will take any actions in response to state restrictions on abortion access or the Supreme Court’s plans to reexamine Roe. The Congressional Progressive Caucus called on Attorney General Merrick Garland to “explore whatever steps” the department “can take.”

But while the Biden administration hasn’t drawn attention to its work on abortion, it has taken several major actions to undo Trump administration curbs on the procedure. In his first few months in office, Biden rolled back restrictions on abortion pills, reversed bans on funding for Planned Parenthood and overseas groups that provide abortion referrals, and removed hurdles to medical research that uses fetal tissue obtained from abortions.

Abortion rights advocates that have worked closely with the administration are pressing the White House to more aggressively use its bully pulpit and regulatory muscle in light of the Supreme Court’s actions. Destiny Lopez, the co-president of the group All* Above All, said two concrete demands are for the FDA to lift restrictions on distributing abortion pills by telemedicine and by mail, and for Biden to lean more heavily on Congress to pass the Women’s Health Protection Act and EACH Woman Act — bills that would bar states from passing laws like Texas’ and provide federal funding to low-income people who want the procedure.

“What I also read into [Biden’s statement] is that they’re deeply committed to this issue and that they’re now finally recognizing that Roe is not enough,” she said. “It never was enough to ensure people can get abortion care where and when we need it. So now we need to work with the administration on a real strategy.”