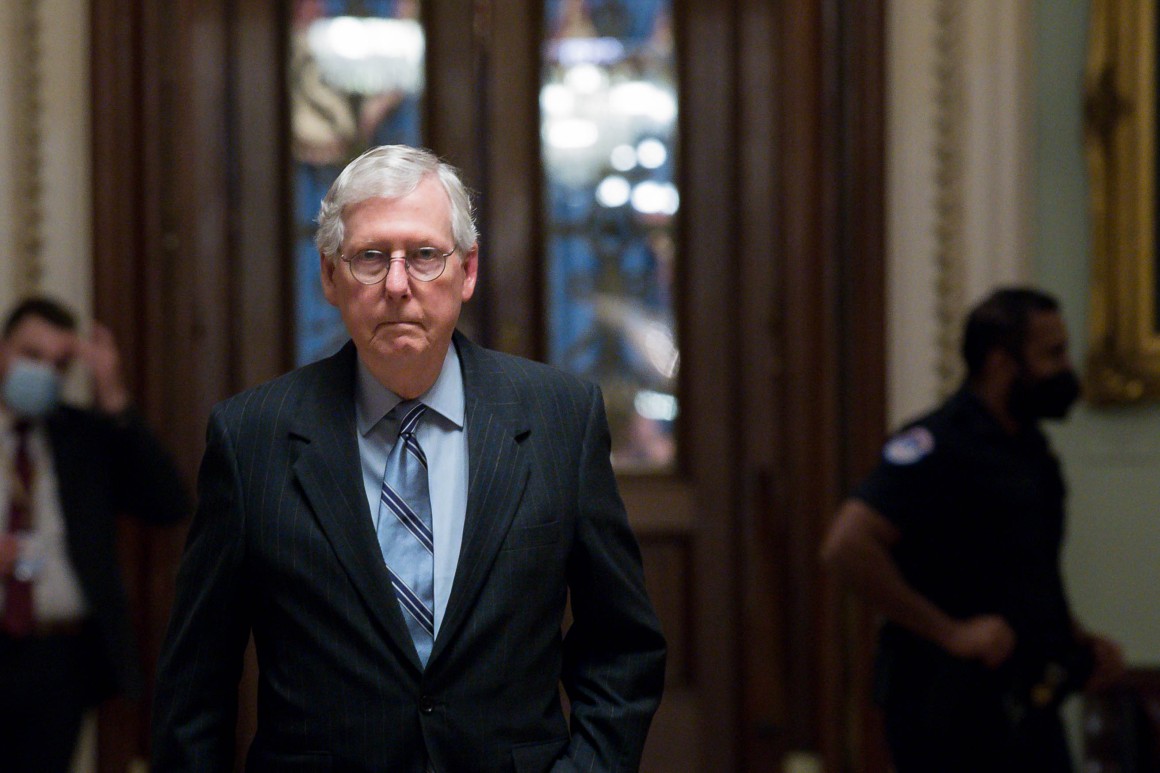 President Joe Biden is treating the latest Republican threats over the debt limit like a bluff. And the entire party, from congressional Democratic leadership to the top brass at the Treasury Department, is calling them on it.

Multiple Democratic sources on the Hill and with knowledge of the White House’s thinking said the administration wants to include a suspension of the debt limit — a legal cap on how much the U.S. can borrow — in a continuing resolution to fund the government. Such a bill, which Congress is expected to consider as early as this month, would require 60 votes to pass in the Senate, meaning at least 10 Republicans would need to vote to advance the measure.

To challenge those Republicans, Biden is also calling on Congress to include funding for hurricane relief in the bill, and Democratic leadership has continued to shoot down questions about possible alternative legislative vehicles in recent conversations with members and close allies. Including a debt limit increase in Democrats’ pending party-line reconciliation package, for example, is one option. But the White House and Democratic leaders are not entertaining it at present.

“They’re right at the moment to say, ‘We’re working on Plan A,’” said a lobbyist with knowledge of the party’s strategy. “The minute you start to signal that that doesn’t work then you’re signaling weakness.”

The posture from the president on down is setting up a game of chicken with incredibly high stakes — if a vote to suspend or increase the debt limit fails, the U.S. economy will likely crater. Treasury officials have said lawmakers will have until an unspecified date next month before the department runs out of ways to prevent a default.

The debt limit is the foundation of the “full faith and credit” of the country’s currency and bonds. If it isn’t raised or suspended, the U.S. defaults on its bond investors, its credit rating could tank and, in turn, the government could be forced to scale back on Medicare benefits, Social Security checks and other programs. The belief in the White House is that a mix of pressure — from business leaders expressing urgency to fears of a full blown financial crisis — will be most acute on Republicans as the deadline nears. After voting for years to suspend or increase the debt limit with Democrats — a routine step required by law — GOP lawmakers in recent history have used the threat of default to score political points when a Democratic president is in charge.

Learning from his former boss, President Barack Obama — who vowed not to negotiate over the debt ceiling after doing it once — Biden is essentially daring Republicans to vote down a debt limit suspension or increase. Since Republicans led by Senate Minority Leader Mitch McConnell announced publicly that his party members wouldn’t support an increase in the debt limit, the Biden administration has not had any additional talks with him on the issue. McConnell’s office pointed to the senator’s past comments on the debt ceiling but did not address whether the two sides had talked.

A White House official said the administration is largely deferring to congressional leaders on the procedural aspects of how to pursue a debt limit increase or suspension. Whether Democrats are pursuing a long- or short-term increase remains unclear. In public and private conversations and briefings with Hill aides, the White House has two main positions: Don’t negotiate with Republicans over what should be a routine vote and clearly message that the debt limit addresses past, not future, spending, seeking to avoid confusion and rebuff GOP attacks over a complex topic.

“The debt limit is a function of bills that Congress has already passed, already wrapped up,” said Brian Deese, director of the White House National Economic Council. “Even if Congress took no future action ever, did nothing else in the future, Congress would have to raise or suspend the debt limit because it’s a reflection of actions already taken.”

The showdown comes as Biden faces a grueling month that will determine the fate of his signature economic items: the bipartisan infrastructure bill and social spending package. On top of that, government funding runs out Sept. 30, the coronavirus pandemic continues to rage and parts of the country are struggling to rebuild after devastating hurricanes and wildfires.

“With everything from Covid to Afghanistan to the weather incidents, the idea that we would self inflict another blow to our country right now and even putting in potential jeopardy the full faith and credit of the United States would be crazy,” said Sen. Mark Warner (D-Va.).

Warner said it’s imperative that Democrats clearly articulate why a default is so cataclysmic and that Republicans are also responsible for the debt limit.

“Do you really want to vote for shutting down the government, not giving aid to people who are the third of Americans who’ve had weather affect [them] and mess with the full faith and credit of the United States all in one vote?” Warner said of Republicans. “I hope not.”

Warner added that a decade ago, there was near unanimity about the dangerous consequences of not raising the debt limit. “But that was before there was an age of the level of misinformation and disinformation,” he said. “This was not a tool that was used against President Trump so on a fairness argument, we’re making the case. Whether that wins the day at a time when things are so unusual, time will tell.”

To stave off a crisis, the administration is also having conversations with business leaders and community bankers and expects them to apply pressure to Republicans with warnings that a default would be catastrophic for the economy, the White House official said.

Others who have spent years working on the issue said the fiscal cliff standoff between Obama and Republicans in 2011 — and the resulting lessons both parties have taken since — is informing Biden’s strategy as president. Seth Hanlon, a former special assistant to Obama at the National Economic Council, said the lesson from that episode is that the debt limit is plainly non-negotiable.

Republicans took away a different lesson altogether. At the time, they refused to vote to raise the debt limit unless they got corresponding budget cuts. Obama negotiated with congressional GOP leaders on a deal and, after talks scuttled, Biden himself picked up the baton and hammered out an agreement with McConnell. McConnell later said he came away believing that the debt limit, which underlies the financial well-being of the country, was “a hostage that’s worth ransoming.”

That standoff between Democrats and Republicans resulted in the nation’s credit rating being downgraded for the first time in history, something Treasury officials have pointed to in recent days as evidence that even negotiations over the debt limit have damaging consequences.

“There were a number of times after 2011 where there was a lot of Republican hue and cry over the debt limit when Obama was president, but ultimately, Mitch McConnell found the cover for himself and his members and joined in raising it,” said Hanlon, now a senior fellow at the Center for American Progress.

So far, McConnell has put the onus squarely on Biden and Democrats to raise the debt limit, saying last month that “they have the House, the Senate and the presidency. It’s their obligation to govern … and the essence of governing is to raise the debt ceiling to cover the debt.”

In recent remarks on the subject, McConnell stressed that “the debt ceiling needs to be raised,” but said the emphasis is “who should do it. And under these uniquely unprecedented circumstances,” he added, “it’s their obligation to do it.”

But Hanlon said he’s confident that pressure from Republican allies in the conservative ranks of big business will ultimately force them to capitulate.

“They’re attuned to financial markets and they know the disastrous consequences that will result,” he said of the GOP brinkmanship on Capitol Hill. “As extreme as the Republican Party has become, I don’t think McConnell is ultimately willing to push the U.S. over the cliff.”