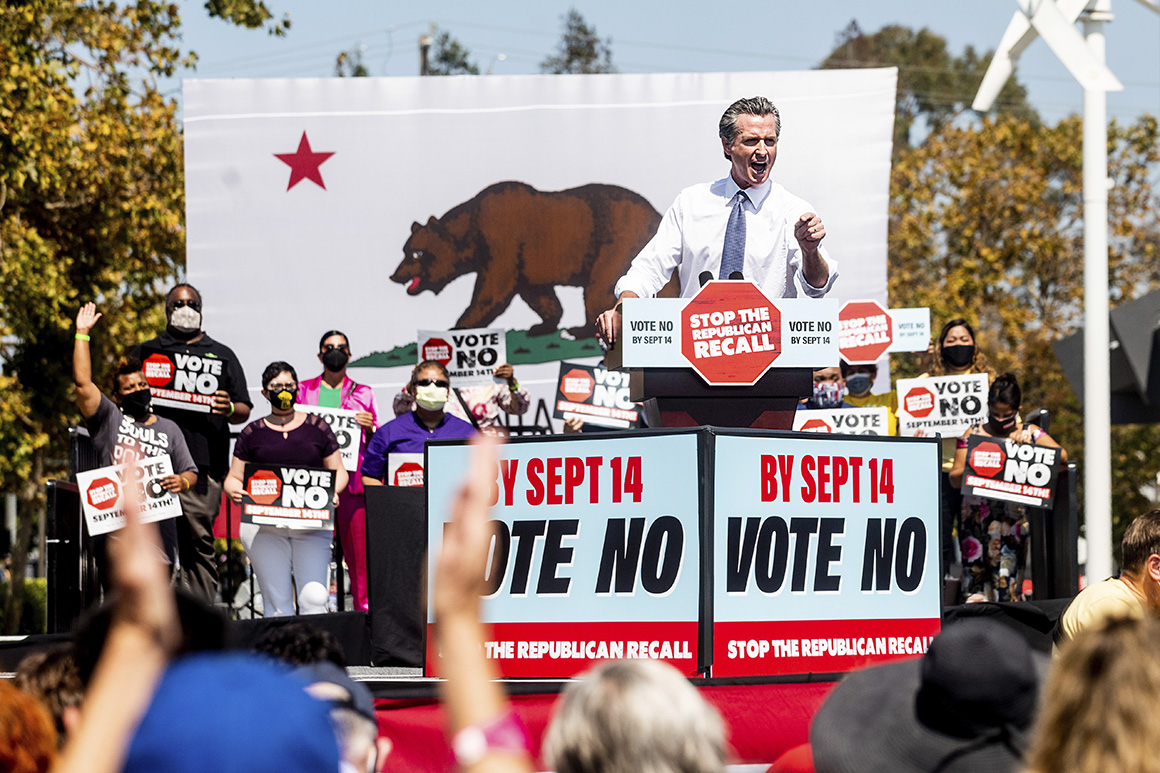 SACRAMENTO, Calif. — California Gov. Gavin Newsom could have women to thank if he fends off the recall on Tuesday.

A striking gender divide has crystalized in the lead-up to the election, with a new poll showing 66 percent of women voters plan to reject Newsom’s ouster. Meanwhile, a razor-thin majority of men say they’d vote to recall him.

Newsom, a self-proclaimed feminist and father of four, has made a habit of speaking directly to women — particularly mothers — as he embraces policies from mask mandates in schools to expanded family leave.

Now, it seems women are returning the favor — cementing their status as a key voting bloc for Newsom and Democrats heading into the 2022 election cycle.

“This polling is not a surprise. This is a huge thank you and a vote of confidence in Gavin Newsom for all the ways he stood up for women,” Ann O’Leary, Newsom’s former chief of staff who also served as a top aide to Hillary Clinton, said in an interview.

Soon after he took office in 2019, Newsom stood alongside his wife, Jennifer Siebel Newsom, the first partner — not the first lady — and highlighted the role of mothers as part of his “parents’ agenda.” He has since signed bills expanding family leave benefits and child care programs, promoting gender pay equity, and eliminating sales tax on diapers and menstrual products — policies long sought by women’s advocates.

On the campaign trail, Newsom holds up red states like Texas, which has all but stripped abortion rights, and Florida, where schools do not require masks, as cautionary tales of what could happen if he is replaced by Republican frontrunner Larry Elder, a conservative talk-radio host who is against mask mandates and called Roe v. Wade “one of the worst decisions that the Supreme Court ever handed down.”

And those “what ifs” appear to be resonating with California women.

“The idea that Larry Elder would be granted the ability to control decisions about women, whether it’s about our bodies or our kids’ mental health or schooling, it’s unconscionable,” O’Leary said. “I think women really get that.”

Elder has only helped Newsom make his case.

The GOP candidate’s talking points on women, which include suggesting that employers have a right to ask women if they intend to have children as a way to protect their “investment,” have been so inflammatory that his Republican rivals have seized the opportunity to juxtapose themselves against him.

At an event in Sacramento last month, former San Diego Mayor Kevin Faulconer called Elder’s comments about women “shocking and concerning” and vowed to fight against workplace discrimination if elected governor — something that is already illegal.

When pressed for examples of how he had championed women’s rights, Faulconer, a pro-choice Republican, said he started “recognizing our female employees, shining that light on them for the first time” as San Diego mayor.

After being pushed to detail his policy plans that would benefit women, Faulconer proposed creating the nation’s first fully paid parental leave program.

Women, particularly women of color, have suffered the most from the pandemic’s economic fallout — some reporting to in-person jobs like child care and others struggling to work from home while juggling distance learning duties.

That means many California women are already on high alert about what they stand to lose in the face of a political shakeup, said Melissa Michelson, a political science professor at Menlo College in Atherton.

For many California women, she said, the recall election represents “a direct perceived threat.”

“What would happen to my reproductive rights? What’s going to happen to the safety of my kids in schools?” she said of women’s considerations. “Both women and men have kids, obviously, but women are more likely to make political decisions based on how they care for their families or their community. In this case, that’s helping Gavin because he’s the one saying he’s going to ensure those things stay.”

Just 27 percent of the women surveyed in recent polls said they thought the recall would make life in California better; 47 percent said it would make things worse. 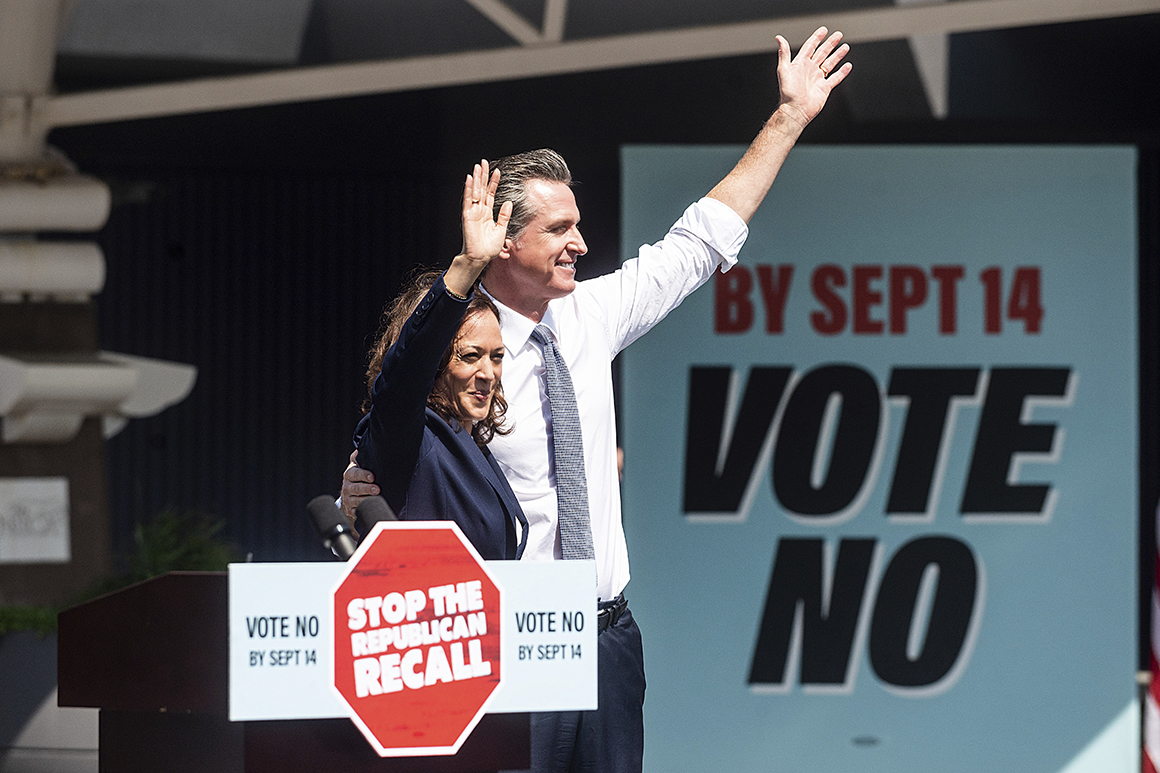 Like any voting bloc, though, women are not a monolith.

So-called mad moms, frustrated by prolonged school closures last year on Newsom’s watch, helped to ignite the recall effort as other states moved faster to return to in-person instruction. The fact that Newsom’s own children attended private school as he suggested they were at home in “Zoom school” like most families fueled a common criticism of the governor: that he is out of touch with the average Californian.

Schools are now open with some of the strictest safety protocols in place, but some parents, particularly mothers of school-age children, remain frustrated.

Harmeet Dhillon, a Republican national committee member and San Francisco-based attorney who has sued Newsom for some of his pandemic school policies, said the governor’s focus on Republican threats to abortion rights and public health is “dishonest” and does not focus enough on real issues facing California women.

“The big women’s issues I’ve heard from day one of this recall is how shutdowns and forced remote schooling has affected women as primary caretakers. It’s been devastating for women’s careers and their satisfaction for life,” she said. “That’s certainly motivated every single mom I know who’s working on the recall.”

In deep blue California, however, women are much more likely to vote Democrat than men.

Mark Baldassare, president of the Public Policy Institute of California — which released the recall polling this month — said women here have long skewed blue, but that the recall gender gaps are still stark.

Newsom successfully warded off any viable Democrats from entering the race, and the GOP failed to offer a top-polling female candidate. Olympian-turned-TV-star Caitlyn Jenner, a Republican candidate, is polling at just 1 percent.

The recall election itself has at times felt like a toxic masculinity contest.

Republican candidate John Cox paraded out a live bear as a campaign prop. In a campaign ad, he labeled himself “the beast,” and called Newsom “the beauty” and a “pretty boy.”

On Wednesday, Elder’s campaign released a spot that compared Newsom to “the guy in high school who took my girlfriend, then went on to the next girl.”

“It really feeds into stereotypes and reinforces this idea that you need a strong man to lead the state, which has always held women back,” Michelson said. “In this case, the message is you want a man that can tame a bear.”