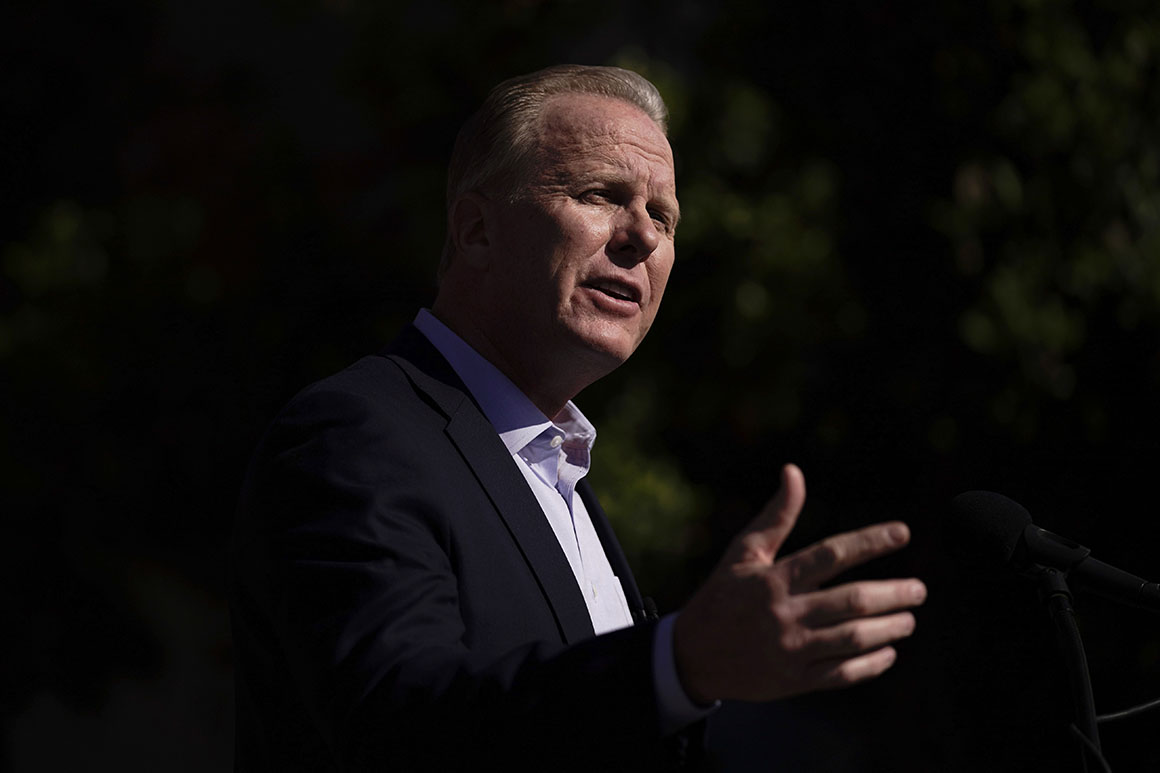 SAN DIEGO — It took a decade of electoral defeats and the humiliation of this month’s failed gubernatorial recall. But as the California Republican Party gathered over the weekend for its biannual convention, the bleak reality sunk in.

For the foreseeable future, Republicans likely won’t be winning top-of-the-ticket statewide races in California — or even seriously competing in them. Even party stalwarts here acknowledged it.

It’s a predictable evolution for a moribund party, but one loaded with identity-altering implications for the GOP in the nation’s most populous state. For years, Republicans in California ran candidates for marquee statewide races, lost and regrouped, certain that the next time might be different. That thinking has changed following their drubbing in the recall.

As the convention unfolded in half-empty meeting rooms at a waterfront hotel, there was no feting of Larry Elder, the conservative radio show host who excited the party’s rank-and-file in the recall — and who discovered that was nowhere near enough to unseat an incumbent Democratic governor. Elder himself was on the opposite coast, tweeting that he was “recovering from the campaign in Key West, Florida.” 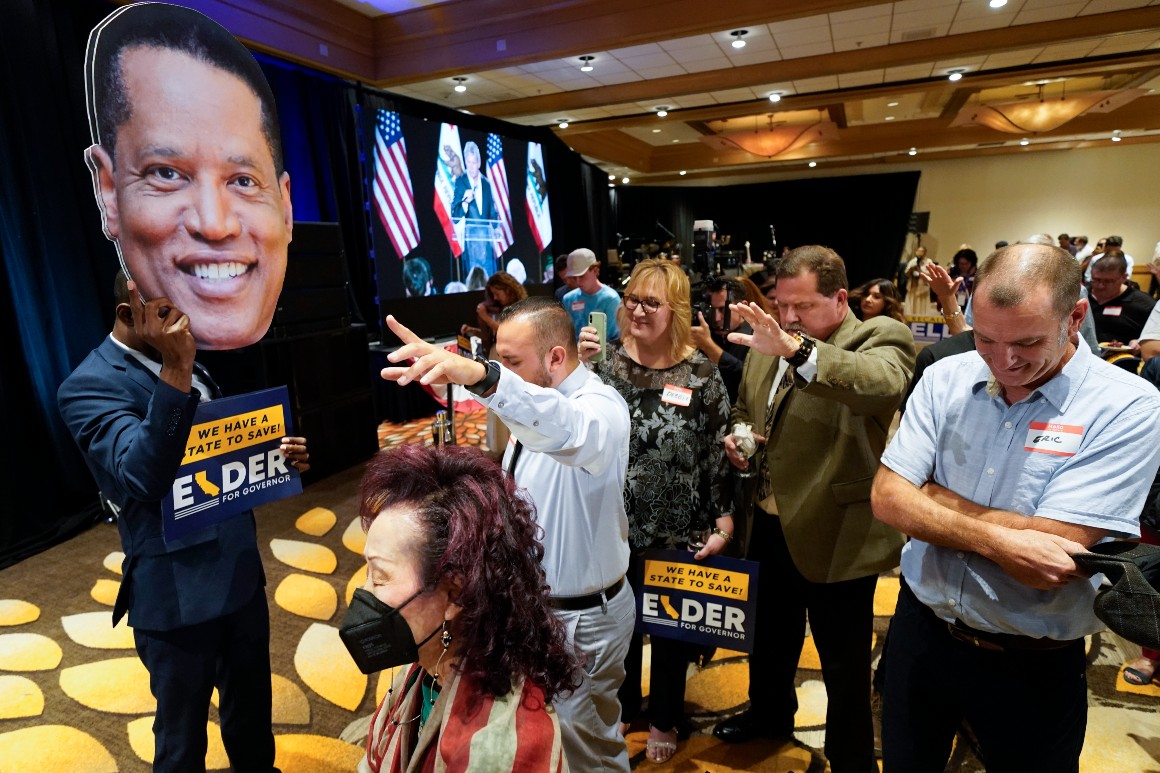 Nor was Kevin Faulconer, once widely considered the future of the state party, on the convention program. The former San Diego mayor, who did even worse than Elder in the recall election, took private meetings on the patio of a restaurant several blocks from the convention hotel, avoiding any confrontation with party activists who disdain his moderate politics.

“We’re down to what, 23 or 24 percent [voter registration]?” said Randall Jordan, chair of the Tea Party California Caucus. “We don’t have a lot of influence in the state of California.”

Resigned to the math in a state where Democrats now outnumber Republicans nearly two-to-one, hardly anyone envisions a Republican winning top-tier races statewide anymore. Instead, the state party will compete in local races in parts of the state where the GOP remains competitive, including in congressional districts in Orange County and suburban Los Angeles — where the outcome of several House races could determine the balance of power in Washington next year.

That’s not insignificant. But it’s a far cry from the party of Ronald Reagan. Reduced to picking narrower targets in red and purple pockets of the state, the California Republican Party today is the portrait of a shrunken party — less a statewide operation than one that competes in discrete pockets across the state.

“Listen, we play in the fights that we can win,” said Jessica Millan Patterson, the chair of the state party.

On Sunday, she told delegates that in 2022, the focus of the state party will be on helping Republicans retake the U.S. House — “on retiring Nancy Pelosi and replacing her as speaker of the House with a Republican from California, Kevin McCarthy.”

For mainstream Republicans who were involved in California politics when the last Republican governor, Arnold Schwarzenegger, was first elected in 2003, the answer to the party’s foundering has long been to get behind a centrist — a candidate who could appeal to the independents and Democrats necessary to win in California. That’s worked for Republicans in past election cycles in Democratic-leaning states like Massachusetts and Maryland.

But that didn’t work for Republicans in California in 2010, when Meg Whitman ran unsuccessfully for governor. And if anything, the recall laid bare how much more difficult that pick-a-centrist calculation may be in the post-Donald Trump era, in which more moderate, Trump-skeptical Republicans have been all but exiled from the party. In the recall, the party’s activist base would not tolerate Faulconer, a centrist, depriving him of GOP support. Meanwhile, the base’s preferred, more Trump-like candidate, Elder, won over Republicans but couldn’t compete for the Democratic and independent votes necessary to win.

Even Elder could see the writing on the wall for 2022. With Democrats holding such a massive registration advantage in the state, he told Inside California Politics after the election, “it’s hard for me to see that were I to have a rematch, the outcome would be a whole lot different.”

He added, “But I may change my mind in the next coming days.”

Faulconer, in an interview on the sidelines of the convention, said a Republican can be competitive in California if they can “build a coalition that includes Republicans, Democrats and independents.” (Faulconer said he planned to meet privately with delegates at the convention site, despite not speaking there, and “of course” felt welcome at the convention).

And because down-ticket statewide races draw less attention than races for president, governor or Senate, Republicans may still have an outside chance at picking off a lower-level statewide office here. Lanhee Chen, who was a top adviser on Sen. Mitt Romney’s 2012 presidential campaign, has declared his intent to run for state controller. Before a reception that he hosted at the convention, Chen, a former appointee of the Obama administration, said that “winning cures a lot of ills, and when you don’t win for a long time, people, I think understandably so, get frustrated.”

He said, “They’re looking for a way forward.”

In focusing on congressional campaigns, rather than statewide races, the party is playing to the one area where Republicans in California are still a relevant entity — federal, or nationalized, races. In 2020, despite Joe Biden beating Trump in California by nearly 30 percentage points, Republicans here flipped four House seats. If the party can hold those seats and win any of several targeted, Democratic-held House districts next year, the party’s efforts in California could factor heavily in the GOP’s effort to retake the House.

That, more than statewide prominence, was the rallying cry for the GOP in San Diego. At a sparsely-attended convention lunch, delegates broke into applause when Rep. Ronny Jackson (R-Texas), told them that “the road to taking our country back by winning the House majority goes directly through California.”

He added that “one of the fastest ways that we can fix what’s broken in California is to have a speaker of the House from California.”

As for top-of-the-ticket statewide races, Republicans here won’t say they’re giving up. Charlie Schaupp, a former chair of the Republican Party in Yolo County, said “you don’t know what’s going to happen in the next year and a half.” And John Berry, a delegate from Redlands, said no matter the odds, “you just never surrender … I’m going to fight the good fight.”

But as for actually winning? The streak of delusion that has long run through the party is fading.

“Amateurs who do what I call drive-by political analysis can always make a case as to why lightning’s going to strike and, you know, you can win,” said Jim Brulte, a former California Republican Party chair and longtime legislative leader who warned back in 2013 that it would take “a minimum of six years“ to turn the atrophied party around. “But the fact of the matter is, with the National Republican Congressional Committee focusing on winning congressional seats, the [state] party can put its resources on top of that and make a difference. With the [state] legislative caucuses doing the same thing for legislative seats, the party can put its resources on top of that.”

If a credible Republican can put up an astronomical amount of money to run statewide, Brulte said, the party should consider getting behind that candidate, too.

Otherwise, Brulte said, “Investing money in a statewide race so our candidate can lose by 13 points instead of 15 points is a waste of investors’ money.”