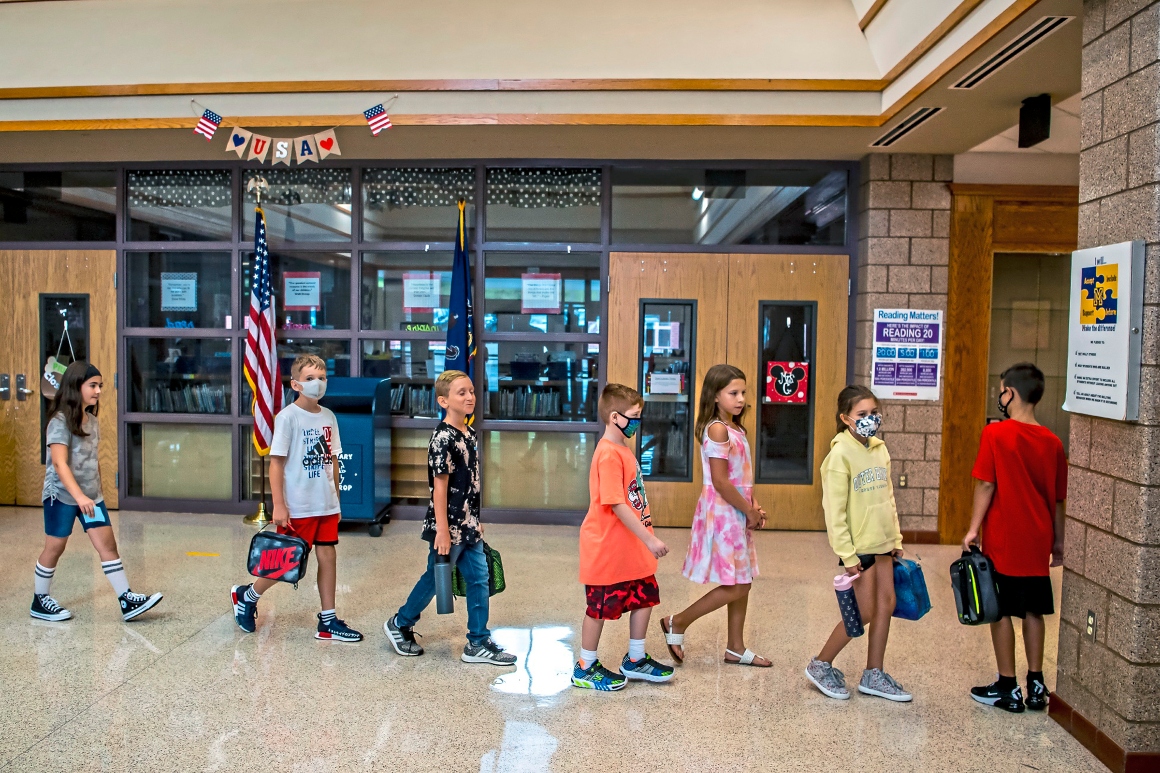 Pressure is mounting on the Food and Drug Administration to authorize Covid-19 vaccines for children under 12 — even though the data needed to support the move is still being collected.

Politicians have joined anxious parents and some public health groups in calling on federal regulators to accelerate their process for authorizing shots for the youngest Americans. They point to a record number of infections among this age group in recent weeks as schools have reopened. These adults want FDA to expedite its review of data from clinical trials in children, especially now that FDA has fully licensed the Pfizer-BioNTech shot for people 16 and older.

“Getting our children vaccinated is critical to giving parents greater peace of mind, but we are being told approval is still months away,” Maryland Gov. Larry Hogan, a Republican, said in a statement late last month urging speedy sign-off on shots for children ages 5 to 11. Others who have asked for a faster timeline include the American Academy of Pediatrics and several members of Congress from both parties.

But those calls are running up against the FDA’s caution and — crucially — a lack of safety and efficacy data. Regulators have already asked vaccine makers to increase the size of their pediatric clinical trials to increase the chances of detecting rare side effects. The first results from one of those studies, Pfizer’s, are not expected until later this month. And top federal health officials have said they don’t expect a vaccine will be available for 5-to-11-year-olds until late fall or winter. Authorization for children as young as six months will come even later.

With cold weather approaching in much of the country, many parents and public health experts see a recipe for disaster. The change in seasons is likely to send more people indoors at a time when the highly contagious Delta variant is circulating and many cities and states have loosened or discarded public health mandates on mask wearing and social distancing.

“While children are at a low risk, thankfully, compared to our adults, they aren’t at no risk — meaning that we are seeing children in the hospital. We are hearing of deaths,” said Jason Newland, a pediatric infectious disease professor at Washington University School of Medicine in St. Louis.

Indeed, hospitalizations among children and teens quadrupled in August in states with low vaccination rates, the Centers for Disease Control and Prevention said in a report released Friday. Hospital admissions for unvaccinated adolescents and for kids 4 and under have each risen tenfold since mid-June, when the Delta variant took hold in the U.S., CDC said.

And while children are less likely to develop severe Covid-19 or die from the virus, Newland said he expects the number of child deaths will rise as more kids are admitted to hospitals following the explosion in cases.

At the heart of the debate over Covid-19 vaccines for kids is the inescapable fact that children aren’t just little adults. Their immune systems are different than those of adults, and their bodies are smaller and still developing.

Those differences help explain why kids have been less likely than adults to have severe Covid-19, and have suffered rare side effects not seen in older people — including the mysterious inflammatory syndrome called MIS-C, which can occur even after mild infections.

But pediatric specialists note that these differences mean that FDA can’t lean on the results of vaccine trials in adults to authorize shots for children. Children often need lower doses of drugs than adults do, and they may also experience different — and potentially more serious — side effects.

Vaccine makers Pfizer and Moderna are studying their shots’ safety and efficacy in younger children and infants, with Pfizer expected to submit results of its 5-to-11-year-olds clinical trial to the FDA this month. Moderna has said its results won’t be ready until closer to the end of the year. Both companies are also testing their shots in children as young as six months.

FDA asked the manufacturers in July to increase the size of their kids’ trials to try to better detect serious side effects like the heart inflammation known as myocarditis, which has surfaced in teens and young adults after vaccination with the Pfizer and Moderna shots. It’s unclear whether the agency’s request will affect the timing of the companies’ submissions.

But several doctors told POLITICO that increasing the number of trial participants won’t do much to help vaccine makers and regulators identify rare side effects. They said a slightly larger trial size could help assuage parents concerned about the reports of myocarditis and other side effects in older teens.

But the generally low rates of adverse events post-Covid inoculation mean manufacturers likely won’t be able to identify rare side effects during the kid trials. And that raises ethical questions about assigning some children enrolled in those trials to a placebo group when a highly transmissible strain of the virus is wreaking havoc nationwide.

”There’s always a human price for knowledge,” said Paul Offit, a vaccine expert at the Children’s Hospital of Philadelphia who co-invented the vaccine for rotavirus, which can cause fatal diarrhea in young children.

Cody Meissner, chief of pediatric infectious diseases at Tufts Children’s Hospital, has urged a conservative approach to approving vaccines for kids, given the myocarditis cases in older teens and young adults and typically low rates of severe outcomes in children.

Like Offit, Meissner is a member of the FDA’s advisory committee on vaccination, which provides recommendations that the agency typically follows.

President Joe Biden and some members of his Covid task force have bullishly predicted that some children under 12 could be eligible for the shots this fall. But National Institutes of Health Director Francis Collins recently suggested it could take longer for regulators to sign off on vaccinating older kids in that group, saying he doesn’t “see approval for kids 5 to 11 coming much before the end of 2021.”

Peter Marks, the head of FDA’s vaccine center, said last month it would take a few weeks at least to assess a vaccine manufacturer’s trial data before the agency issued an emergency use authorization to use a shot in children.

Even the American Academy of Pediatrics has urged the FDA to speed things up, arguing last month in a letter to acting FDA Commissioner Janet Woodcock that “the Delta variant changes the risk-benefit analysis for authorizing vaccines in children.” Regulators could authorize the shot for those older kids using already-available data from the initial group enrolled in clinical trials, AAP President Lee Savio Beers said, while continuing to track safety data from the expanded group

The number of children infected has “increased exponentially” since early summer, AAP said in its Monday update on child cases. Cases have risen fivefold over the past month, the group said, going from about 38,000 in mid-July to almost 204,000 last week.

Children have made up nearly 15 percent of total Covid cases since the pandemic began, AAP said. For the week ending Aug. 26, kids made up 22.4 percent of weekly cases.

Dozens of lawmakers from both parties asked Woodcock on Aug. 17 for a briefing on FDA’s regulatory process for authorizing Covid vaccines for young children.

The beginning of the school year “was a clear moment that could have been used to educate and disseminate vaccines,” said the members, led by Democratic Reps. Ro Khanna and Katie Porter. “Now with a late summer surge, the reopening of schools seems likely to increase community spread.”

Public health experts agree that children can return to school safely with a multilayered “cocooning” approach that involves requiring masks, spacing out desks and improving ventilation in classrooms, plus vaccinating the adults and teens in their orbit. But with whole swathes of the country eschewing mask and vaccine mandates, and in some cases prohibiting them, it’s unclear when the spike in children’s Covid cases will come down.

“Polio had no friends,” Offit said of the viral disease that paralyzed thousands of U.S. children in the 1940s and 1950s, and has since been eradicated domestically by vaccines. “This virus has a great many friends.”