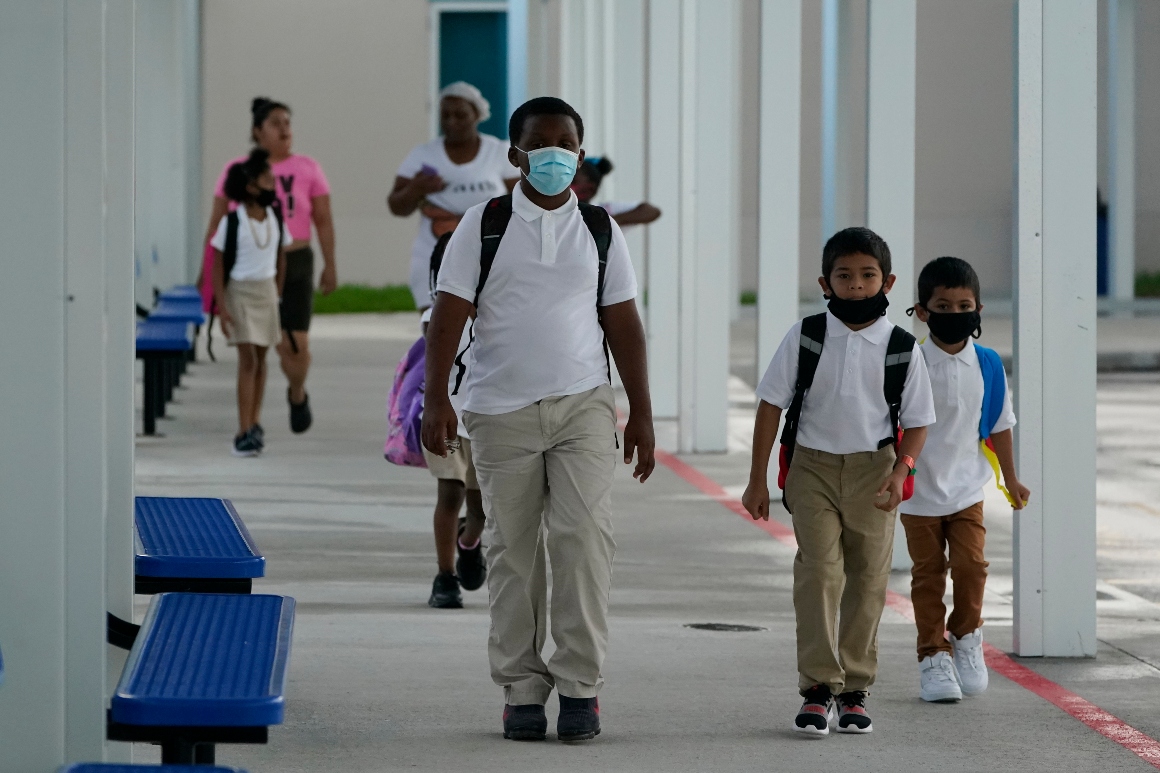 TALLAHASSEE — Florida reached another grim Covid milestone amid the Delta surge: Since August, the number of Covid-related child deaths in the state has more than doubled.

The childhood fatalities have left pediatric experts deeply concerned about how the virus will affect youngsters in the months ahead as children interact in classrooms, even as the overall number of infections and hospitalizations in the state appears to be cresting.

The deaths also pose a political threat to Gov. Ron DeSantis ahead of his 2022 reelection bid. The GOP governor has built a national reputation for resisting coronavirus restrictions and has spent weeks fighting against school districts that want to require students to wear masks in schools.

A POLITICO analysis of weekly Covid-19 reports from the Florida Department of Health shows that 10 children under the age of 16 died from Covid-19 from July 30 to present as the Delta variant — which is much more transmissible — became the dominant strain. Previously, a total of seven kids died from the virus from the beginning of the pandemic through July, amounting to a span of more than 15 months.

The state now has seen 17 deaths, and American Academy of Pediatrics Florida President Lisa Gwynn said many of them may have had underlying medical conditions when they became infected.

“Having said that, it doesn’t mean we’re not worried sick about it,” Gwynn said during a Sept. 3 interview. “We’re all worried because we’re not sure what’s going to happen in the future.”

The child deaths come as Florida finally sees an easing in the surge of new infections, which ravaged the state over the summer. Florida accounted for one in five infections nationwide over the summer, which stretched an already strapped nursing workforce and jammed hospitals to the point where some facilities used office boardrooms as overflow wards.

But the deaths since July 30 also occurred as hundreds of thousands of kids in Florida began returning to classrooms and amid the ongoing fight between DeSantis and school districts over student mask mandates. Many students in Florida also attended schools in-person during the previous school year. Thirteen school districts have rejected DeSantis’ rule against requiring face coverings in schools — including five in GOP-leaning counties — and a Florida judge recently ruled that the governor overstepped his authority in attempting to prohibit schools from implementing mandatory mask policies, though an appeals court on Friday reinstated DeSantis’ ban.

The Republican governor’s light-handed approach toward Covid-19 restrictions is rooted in the belief that residents should take health safety measures into their own hands. He has won praise from conservatives across the nation for his rejection of lockdowns and measures like vaccine passports, positioning DeSantis for a possible 2024 presidential run if former President Donald Trump chooses not to mount a bid.

The more than 46,000 people in Florida who have died from Covid-19 since the pandemic began includes over 36,000 seniors aged 65 and older. While the 17 child deaths may seem low compared to the older adults, the increase of six deaths in August is an inevitable result of more kids becoming infected, according to officials at the Wolfson Children’s Hospital in Jacksonville.

Mobeen Rathore, Wolfson’s chief of pediatric infectious disease and immunology, said more children are being admitted to intensive care units and getting intubated.

“Unfortunately, some of these children will not survive,” Rathore said.

Despite the jump in deaths, the rate of kids testing positive for Covid-19 for the first time is about the same as last winter before the current Delta surge. Florida saw an overall 63 percent increase in new childhood infections in August, which is the greatest monthly increase in cases for kids since March 2020. What’s different is that more of those kids are landing in the hospital specifically for Covid-19, Wolfson officials said.

There were 254,412 childhood Covid infections at the end of July, but the state added 146,604 from July 30 to Sept. 2. The state data does not break down the number of new infections by age, though children 12 and older are eligible to receive the vaccine. Nationally, there were more than 750,000 new Covid infections in children from Aug. 5 to Sept. 2, according to the American Academy of Pediatrics.

At least seven of the 17 kids who have died were patients at Wolfson. The hospital’s chief of pediatric critical care, Michael Gayle, said most of those patients also suffered from underlying medical conditions such as obesity.

However, otherwise healthy kids are now facing multisystem inflammatory syndrome about a month after they become infected by the virus. The syndrome, also known as MIS-C, is an inflammation of the heart, lungs, kidneys, brain, skin, eyes, or gastrointestinal organs, according to the U.S. Centers for Disease Control and Prevention. The syndrome can also affect individuals with mild cases.

“While most, but not all, of the children who have died in the Pediatric Intensive Care Unit (PICU) had an underlying health condition such as obesity or were immunocompromised, most of the patients we have treated for MIS-C were previously healthy,” Gayle said in an interview.

DeSantis’ administration did not answer questions about the increase in deaths. His spokesperson, Christina Pushaw, instead pointed to a statewide decrease in pediatric hospitalizations over the past two weeks. She said kids age 12 and older are eligible for treatments such as the Covid-19 vaccine and monoclonal antibody therapy, which DeSantis has pitched for weeks.

“We are very happy to see that pediatric hospitalizations are not, in fact, increasing,” Pushaw said. “On the contrary, they are declining rapidly.”

But Walensky also said the parts of the country where the CDC is monitoring surges have not implemented CDC guidance on masking children and vaccines. While DeSantis has pushed Floridians to get vaccinated, he has strenuously fought against making masks mandatory, a stance that Gayle partly blamed for the increase in hospitalizations on students returning for in-person learning.

“And there is no mask mandate, so not all children are wearing masks,” Gayle said.