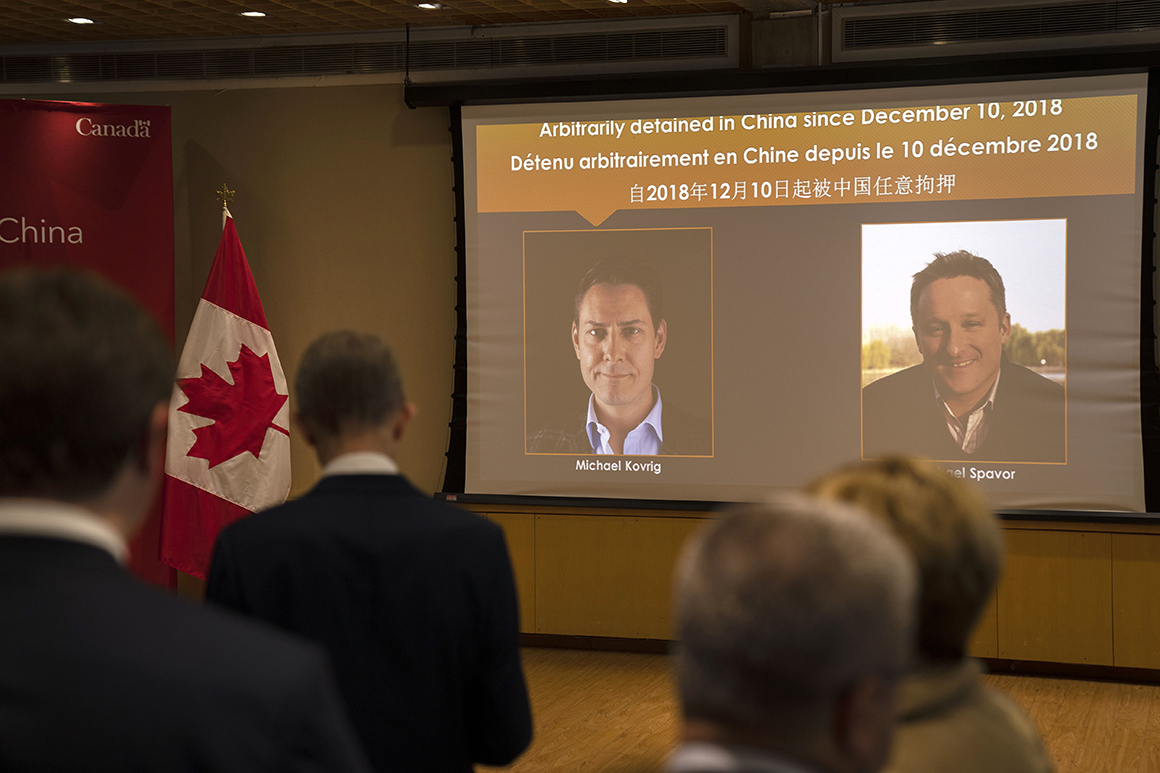 News that China had freed the men was announced shortly after Huawei Chief Financial Officer Meng Wanzhou left Vancouver for China after reaching a plea deal with U.S. prosecutors.

“They boarded at about 7:30 p.m. Ottawa time along with Dominic Barton, Canada’s ambassador to China,” Trudeau told reporters at a late evening press conference. “These two men have gone through an unbelievably difficult ordeal. For the past 1,000 days they have shown strength, perseverance, resilience and grace and we are all inspired by them.”

The two Canadians have been detained by Chinese authorities since December 2018 over espionage charges. Their arrests were widely seen as a retaliatory tactic from Beijing in response to Meng’s arrest by Canadian authorities at Vancouver International Airport nine days earlier.

As part of the country’s extradition treaty, Canadian police had been carrying out an American warrant for her arrest related to fraud allegations.

With Foreign Affairs Minister Marc Garneau beside him, the prime minister alluded that more details would come later.

“I know that there is going to be time for reflections and analysis in the coming days and week, but the fact of the matter is I know Canadians will be incredibly happy to know right now, this Friday night, Michael Kovrig and Michael Spavor are on a plane and they’re coming home,” he said.

Beijing has repeatedly denied that Kovrig and Spavor were political hostages connected to Meng’s extradition case — an assertion challenged by the timing of the two Canadians’ release after the Huawei executive boarded an Air China flight for Shenzhen after being freed.

“Over the past three years my life has been turned upside down. It was a disruptive time for me as a mother, as a wife, and a company executive. But I believe every cloud has a silver lining. It really was an invaluable experience in my life,” Meng told reporters outside a Vancouver courtroom earlier in the day.

In Canada, the high-profile consular case has been referred to as the “Two Michaels,” which has become a shorthand to invoke the country’s frosty diplomatic relations with China.

As a middle-power country, Canada has relied on leveraging its relations with allies to put pressure on Beijing to free both the “Two Michaels.”

Both the Trump and Biden administrations have advocated for the two Canadians’ release and 28 diplomats representing 26 countries showed up in solidarity to support Kovrig and Spavor when Beijing held secret trials earlier this year.

U.S. Secretary of State Antony J. Blinken said he is pleased to know the Canadians are returning home. “The U.S. Government stands with the international community in welcoming the decision by People’s Republic of China authorities to release Canadian citizens Michael Spavor and Michael Kovrig after more than two-and-a-half years of arbitrary detention.”

Vina Nadjibulla, Kovrig’s wife, told POLITICO last year that the detention had taken a harsh toll. The pair, who are separated, met when they were students at Columbia University in 2001.

Despite the global pandemic, Nadjibulla said her husband heard nothing from the outside world for most of 2020. Consular visits had been cancelled in January 2020. He spoke briefly to his sick father last March, but from then to October 2020, he was shut out from the world.

That period was “very difficult” for him, Nadjibulla said. “It’s difficult to imagine that level of confinement, of isolation.”

At the time, she said her husband was coping with the ordeal “by doing exercises while in detention.” Books also offered some solace, she said, “that’s what essentially allows him to get through the days, as he says, with some level of grace and dignity.”

Tense relations with Beijing are unlikely to go away with Trudeau facing pressure to offer an updated China policy.

“As ambassador, if I’m confirmed, it’s an appropriate role to be engaged in discussions and make sure that Canada’s policies reflect its words in terms of the treatment of China,” Cohen said.

Domestically, Trudeau is also facing pressure from opposition Conservatives to adopt a tougher approach on China including banning Huawei’s 5G technology from Canadian networks in the interest of national security.