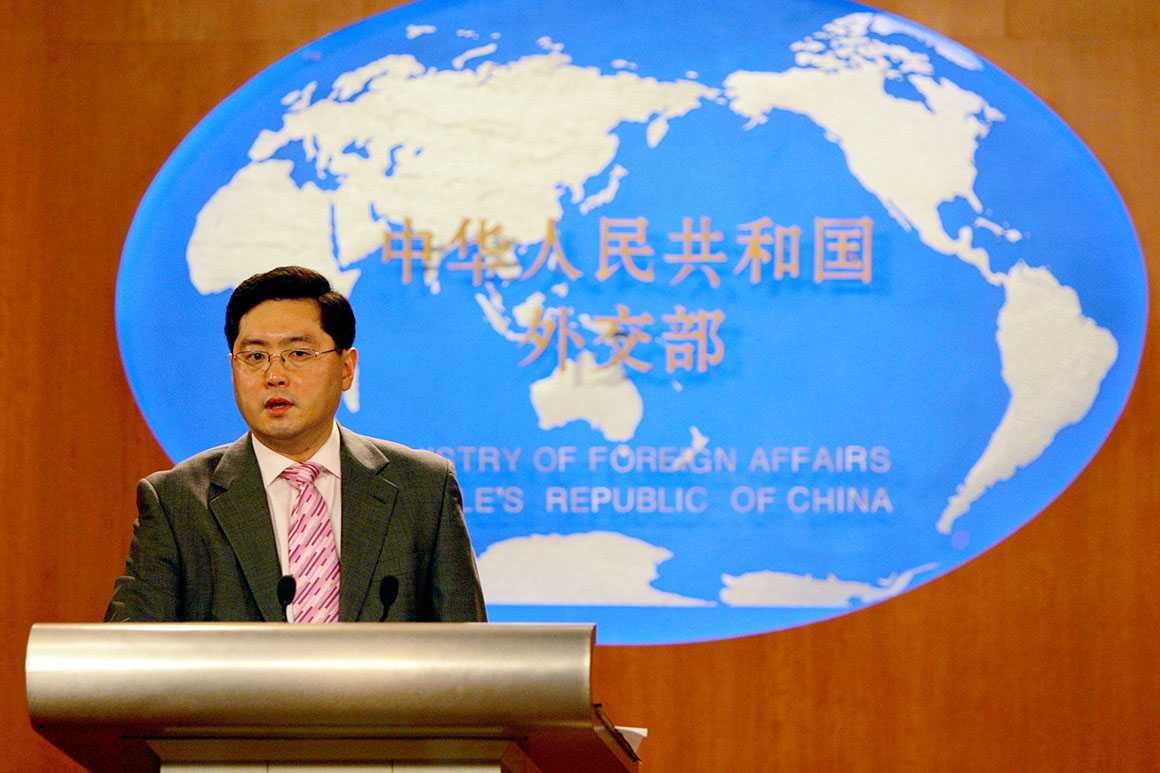 China’s newly minted ambassador to the United States arrived only in July, but the honeymoon is already over. Qin Gang on Tuesday reinforced his reputation as a sharp-edged avatar of Chinese diplomacy with a speech that excoriated U.S. “wrong beliefs” and cautioned against violating Beijing’s “red line” of core interests in areas including the South China Sea, Taiwan and Xinjiang.

In his most substantive public statement yet, Qin pointed ominously to China’s nuclear weapons capability and warned of “disastrous consequences” if the U.S. seeks to suppress China using a “Cold War playbook.”

Speaking via video link to a select audience of China wonks and foreign policy heavyweights — including Henry Kissinger, former U.S. ambassador to Beijing Stapleton Roy and former assistant secretary of State for East Asian Affairs, Susan Thornton — China’s ambassador said those who argue his country would meet the same fate as the former Soviet Union show a “serious ignorance of history and China.”

Qin’s speech at the National Committee on U.S.-China Relations underscores his history as an early pioneer of the aggressive “wolf warrior” style of diplomacy that is increasingly defining Beijing’s approach to the United States and the world.

As a Foreign Ministry spokesperson from 2005-2010, he would mock members of the media, once telling a journalist “not to report based on your delusions.” In February as vice foreign minister, he responded to a journalist’s query about “wolf warrior” diplomacy by excoriating “evil wolves” for negative reporting about China.

Upon taking up his new post, Qin struck a conciliatory tone at a time of high tensions with the United States. He promised to “endeavor to bring China-U.S. relations back on track, turning the way for the two countries to get along with each other.” But his comments Tuesday suggest he will continue to deploy a bare-knuckle style of diplomatic engagement that has curdled recent high-level bilateral meetings in Anchorage and the Chinese port city of Tianjin into vitriolic standoffs.

Qin’s speech offered a measure of hope, noting that China sees opportunity for substantive bilateral cooperation on existential issues including climate change and containing Covid-19 worldwide. He referenced the “ping-pong diplomacy” that paved the way to the establishment of U.S-China diplomatic relations in 1979 and said he was committed to a “more rational, stable, manageable and constructive China-U.S. relationship.”

But the bulk of his presentation drilled down on the Chinese government’s dissatisfaction with what it perceives as U.S. politicians dedicated to “suppressing China” and cautioned against the U.S. government depicting China as “its rival and imaginary enemy, just like when Don Quixote tilted at windmills.”

The list of Qin’s grievances ranged from a warning against U.S. support for Taiwan independence to criticism of the Biden administration’s endorsement of a World Health Organization probe into the origins of the coronavirus.

U.S. government restrictions on the operations of blacklisted Chinese telecom equipment firm Huawei and a raft of China-focused draft legislation moving through Congress drew his most concentrated fire.

Qin accused the Biden administration of leveraging “state power to bring down Huawei” and warned that the passage of legislation, including the EAGLES Act and the Innovation and Competition Act of 2021, “will hijack China-U.S. relations and gravely damage America’s own interests.”

That uncompromising language suggests that Qin’s tenure as ambassador will be characterized by confrontation in the face of deepening bipartisan skepticism about the quality and direction of the U.S.-China relationship.