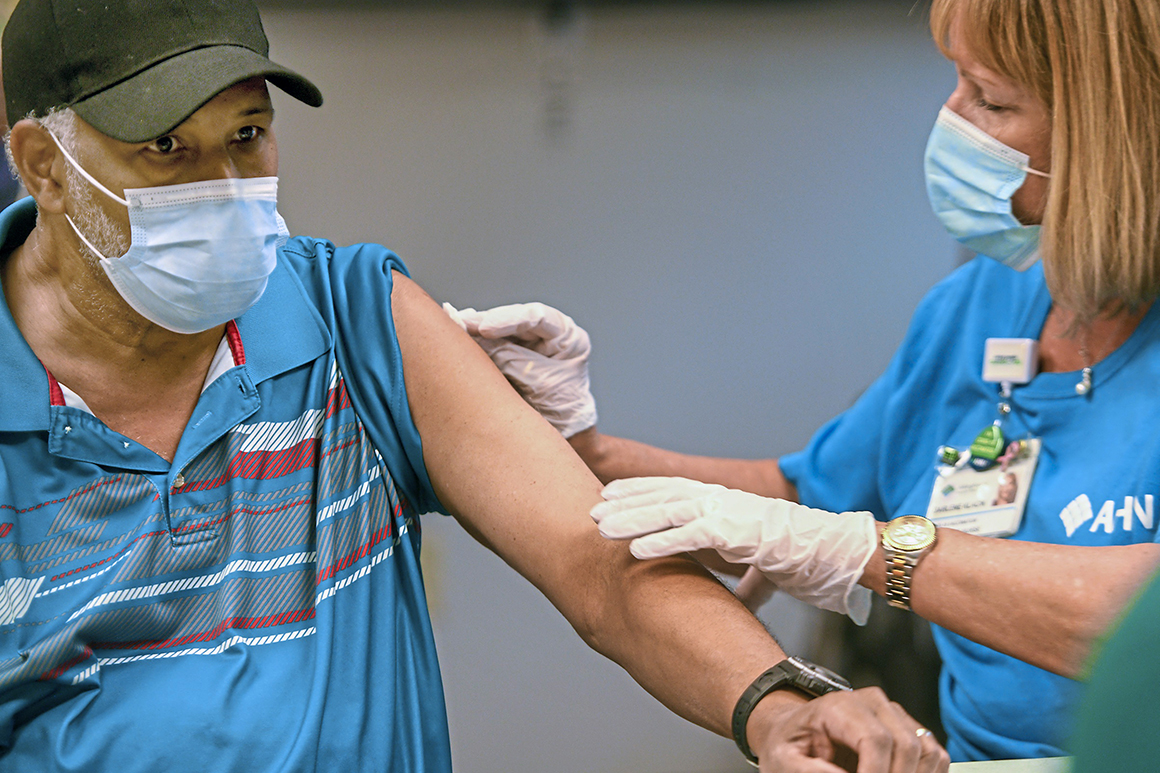 States are wrestling with how to dole out Covid-19 boosters after federal regulators set eligibility guidelines so broad that nearly all of the 100 million Americans who received the Pfizer-BioNTech vaccine qualify for a third shot.

People age 65 and older, as well as people 18 to 64 with underlying health conditions or jobs that increase their risk of developing severe Covid, are eligible for a third dose, federal health officials said last week. The sheer breadth of qualifying medical conditions and occupations, plus the lack of any proof requirements, means just about anyone who got the Pfizer vaccine can now seek out a booster. The only hard-and-fast rule is that people must wait at least six months after their initial two shots to get a third.

In West Virginia, where just 40 percent of the population is vaccinated against Covid-19, Gov. Jim Justice — a Republican — is encouraging nearly any adult who has received two doses of the Pfizer vaccine to get in line for a third, citing the growing burden on the state’s hospitals. Vermont, which has one of the nation’s highest vaccination rates, is taking a phased approach, starting with people 80 and older last Friday.

The expanded booster push comes as state and local health officials are struggling to convince many people to get their first round of Covid-19 shots, amid fears that colder weather and the coming holidays could further fuel the virus’ spread. Now they must help the public navigate the ambiguities of the federal guidelines to ensure those who need third shots get them. The task is complicated because many people who would otherwise be eligible for another dose are in limbo until the Biden administration authorizes boosters of the Moderna and Johnson & Johnson vaccines.

The booster rollout also will look different in many states than the initial vaccine push last spring. Many people can now get Covid-19 shots at pharmacies, and the mass-vaccination sites that once dotted the country have largely closed.

“In the winter, it was all hands on deck,” said Adriane Casalotti, chief of government and public affairs at the National Association of County and City Health Officials. “Right now, that’s not necessarily the case.”

Local health agencies are facing different resource constraints than they did last winter, she said. While the country has an ample supply of doses and vaccination sites, “that doesn’t always translate to appointments when folks want them with the Pfizer vaccine,” Casalotti said.

Some local vaccine providers may not have enough Pfizer doses on hand to meet demand at a given time, or enough workers to immunize people, Casalotti said. “And at this point, many, many, many people are beyond that six-month window” of when they received their second dose, she added.

That hasn’t stopped some governors from pushing boosters to broad swaths of their residents. “For the most part, if you want a booster shot and you’re 18 and older — in any situation, just about, that you feel compromised — you can now get your booster shot,” Justice said Friday.

But Scott Harris, Alabama’s health officer, said his state isn’t “automatically asking” every adult resident to get a booster. “This is a very confusing situation,” he said Friday.

Molly Howell, the immunization program manager for the North Dakota Department of Health, echoed his concerns. She said the biggest booster-related stumbling block so far has been effectively communicating who needs a third shot.

“I think the public may be a bit confused,” she said. “It may prevent them from coming in for boosters.”

The Centers for Disease Control and Prevention has said people 65 and older, as well as individuals 50 to 64 with underlying health conditions, should get a booster, while younger adults with qualifying illnesses or jobs may opt for one. There are still many questions about which underlying health conditions and which jobs qualify people for the additional shot, she added.

People who are unsure whether they need a Pfizer-BioNTech booster should talk to their health care provider about their underlying conditions and their potential Covid-19 exposures, Howell said.

“If you’re a healthy 30-year-old who works from home, and you’re fully vaccinated, right now you’re likely not going to be hospitalized and die due to Covid. You may still get a breakthrough infection, but it’ll still be fairly mild,” she said. “But if you’re an elementary school teacher, and every day you’re going into a situation where you’re probably exposed [to Covid] … then you may say, ‘I don’t want to risk it.’”

Part of the confusion surrounding booster eligibility stems from the Biden administration’s announcement last month that it hoped to roll out the shots for most adults beginning in late September.

That plan morphed amid objections from health experts in the government and outside, who argued that the administration did not have sufficient safety and efficacy data to justify a widespread booster launch. The Food and Drug Administration and CDC ultimately approved narrower eligibility criteria on the advice of their staff and their independent vaccine advisory committees. The federal government has estimated that 20 million people now qualify for the Pfizer-BioNTech booster and a total of 60 million will qualify in the coming months.

The “back-and-forth” between Biden administration officials and federal health agencies created “some amount of confusion,” New Jersey Gov. Phil Murphy said on Monday during his regular press briefing in Trenton. While the state health department has been “crystal clear” in specifying what groups are eligible, the Garden State won’t aggressively enforce the criteria at points of access.

“We never asked you to prove that you have X or worked in Y, or give us your driver’s license, or any of that,” Murphy said. “Our view was, the more shots in arms — assuming you’re eligible and doing the right thing — the faster we get that done, the better and safer we’ll be. That’s our same mindset for the boosters.”

The federal government has urged states and vaccine providers to remove as many barriers as possible to additional Covid vaccine doses, beginning in August when health agencies endorsed third Pfizer or Moderna doses for people with severely weakened immune systems.

But with 2.78 million people having received a third vaccine dose as of Monday — 410,000 more than had by Friday — it’s an open question how many were among those the FDA and CDC intended to reach.

“Basically, they’re opening the floodgates completely now, and they’re dancing around it with some gobbledygook language,” Justice said Friday.

Sam Sutton contributed to this report.