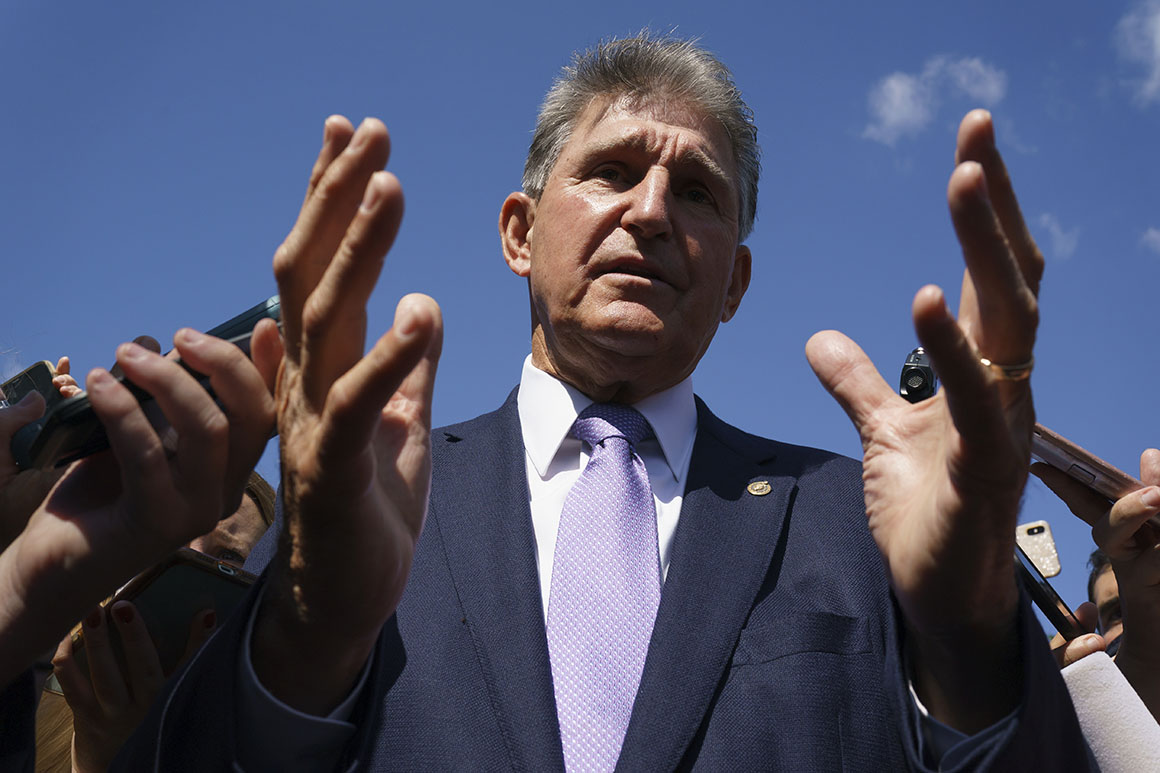 Democrats are desperately trying to make lemonade out of the bag of lemons Joe Manchin handed them Thursday.

Senate Democrats spun away Manchin’s utter rejection of their $3.5 trillion spending dreams and embrace of a $1.5 trillion plan as a positive development, saying that it offered them a path forward for negotiation on a potential deal. When that deal will come to fruition, however, is anyone’s guess.

And that still leaves some Democrats pretty sour about the whole affair, as progressive aspirations face their second major setback. Their original goal was $6 trillion earlier this year, which slipped to $3.5 trillion this summer and could now drop by more than half.

“I could see myself coming below $3.5 trillion but we shall see how far $1.5 trillion goes,” said Sen. Mazie Hirono (D-Hawaii). “He’s confirmed that’s as far as he’ll go, which is pretty sad if you ask me.”

Manchin delivered another dose of reality Thursday to his Democratic colleagues, after POLITICO obtained an internal memo he provided to Senate Majority Leader Chuck Schumer back in July, which outlined his red lines for Democrats’ social spending package. The party quickly convened a caucus lunch to get on the same page.

Democrats appeared tense as they entered the private meeting, but inside the room, the atmosphere was “weirdly chill” as one attendee put it. Manchin didn’t even take part in the lunch. Yet much of the conversation was focused on Democrats’ path forward both on their social spending plan and the upcoming fight with Republicans over raising the debt limit.

“There’s a sense of optimism about ‘we’ll get there,’ but the point of frustration and lack of clarity is: How soon,” said Sen.Tim Kaine (D-Va.) “I encouraged everybody: ‘The time is now for a deal.’”

The discussions come as President Joe Biden’s domestic agenda teeters, with the fate of the bipartisan physical infrastructure package unclear in the House and moderates like Manchin and Sen. Kyrsten Sinema (D-Ariz.) still engaging in negotiations with the White House over the social spending plan.

Sinema put out a statement shortly after Manchin’s memo went public, disclosing she’d given numbers and details to Biden and Schumer in August. She emphasized, yet again, that $3.5 trillion was too high for her to support.

That still leaves Democrats in a bind, wondering if they start with Manchin and Sinema’s proposals and try to negotiate them up, or if they should fight to preserve their current proposal to expand childcare, education, health care coverage and climate action.

When asked about a $1.5 trillion topline, Sen. Ben Cardin (D-Md.) replied: “There’s two things I need to know. I need to know the number and I also need to know what’s in it. So until you know both, you can’t respond.”

While Democratic leaders laid out an overly optimistic timeline for the physical infrastructure bill and social spending package, Cardin and other Democrats still said that they would have liked to have seen more progress by this point.

“I wish we were further along, but getting significant policy changes is going to be difficult,” added Sen. Bob Casey (D-Pa.). “We’re just going to keep going.”

Despite the absence of a clear path forward, Democrats are publicly insisting that they will deliver on Biden’s agenda, even as progressives are privately bristling at Manchin’s latest demands. As one Democratic aide observed of the Senate Democratic Caucus’ frustrations with Manchin: “They’re not talking. But they are fuming.”

“Mr. Manchin has his view on the subject, I have another view: Which is that $3.5 trillion is actually a conservative number given the crisis that we face on climate,” said Sen. Bernie Sanders (I-Vt.). “I hope very much that the day will come sooner than later where we will pass both the bipartisan infrastructure bill which is very, very, important. And pass a strong reconciliation bill.”

Schumer has long insisted on a “two-track” strategy, under which Democrats would not pass the bipartisan physical infrastructure package without the social spending bill. And while Schumer signed Manchin’s proposal, he hand wrote: “I will try to dissuade Joe on many of these.”

Senators on Thursday, however, refrained from criticizing Schumer, acknowledging the diverse views within the 50-member caucus and the reality that he can’t lose a single vote on the social spending plan.

Schumer “walked out of that discussion with Sen. Manchin hoping he could continue to convince him to do more,” said Sen. Chris Murphy (D-Conn.). “Of course I would rather have this discussion a few months ago. Joe wasn’t ready to have that discussion two months ago, it doesn’t obviate our ability to get something big done.”

But while one Democratic senator described Manchin’s proposal as an “opening bid,” the West Virginian is giving no indication he is willing to change course. During a press conference Thursday, he suggested that if Democrats wanted to pass legislation that cost more than $1.5 trillion, they should elect more liberals.

Progressives, meanwhile, widely view the social spending plan as their greatest chance for enacting their priorities this Congress, and potentially for Biden’s entire tenure. But even as they vow to deliver, despite internal hurdles and resistance over the topline, no one is expecting a glide path to success.