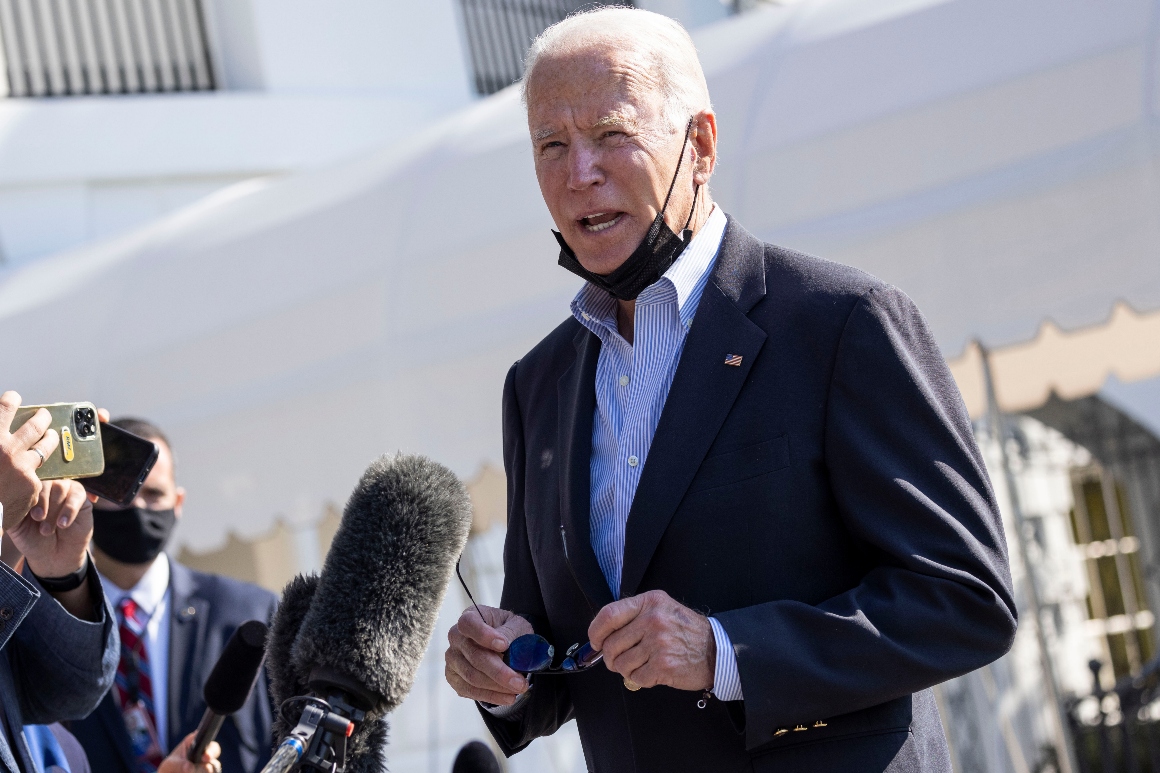 Joe Biden was billed as the steadying antidote to four turbulent years of Donald Trump. But after being buffeted this summer by one crisis after another — Covid, Afghanistan, wildfires in the West and Hurricane Ida in the East — his young presidency is confronting a make-or-break fall.

Democrats are well aware of what happened to the last two Democratic presidents after a choppy first two years. Halfway through Bill Clinton’s first term, in 1994, Democrats lost 54 House seats and eight in the Senate, ceding control of both houses of Congress to Republicans for the first time in 40 years. The carnage during Barack Obama’s first midterm was even uglier: Democrats lost 63 seats in the House.

If Biden doesn’t regain his footing within the next few months, many party veterans fear, his party’s chances of holding on to its narrow majorities in Congress are almost non-existent.

“There’s no good news here. This is all on his watch,” said Paul Maslin, a top Democratic pollster who worked on the presidential campaigns of Jimmy Carter and Howard Dean. “You can argue what he’s doing or not doing, but it’s almost irrelevant. If things are chaotic and wrong, it ain’t going to help him.”

Democrats are already beginning to calculate the potential cost to the party in 2022. Over drinks on the sidelines of a recent meeting of the Democratic Governors Association in Aspen, Colo., party donors and operatives privately took stock of the damage that Afghanistan and the resurging coronavirus pandemic might hold for the party’s prospects in the midterm elections next year. The assessment was bleak.

“When Biden was elected, it was supposed to be, ‘Oh, the adults are back in the room to take charge,’” one strategist who was in Aspen said. “It turns out, we can’t do anything. Any Democratic strategist who thinks this is not going to impact the midterms or impact Biden being reelected, clearly they don’t know what the f— they’re talking about.”

Biden’s approval ratings, which have sunk to the mid-40s, stand about where Clinton’s did at this point in his presidency, and they are worse than Obama’s in 2009, before his self-described “shellacking” in the midterms the following year. Democrats today hold a slimmer majority in Congress than either of those presidents had, with less margin for error in the next midterm elections. And that was before a summer in which nothing seemed to go right.

On Friday, Biden was forced to respond to the release of a weak August jobs report. Then it was off to Louisiana, where he surveyed hurricane damage. The Caldor Fire that was scorching the Lake Tahoe region slowed over the weekend. But new wildfires were burning in California and on Tuesday he was visiting storm-ravaged areas of New York and New Jersey. The Delta variant, meanwhile, has thrown the country into another wave of Covid.

“The guy can’t catch a break,” said Les Francis, a Democratic strategist and former deputy White House chief of staff in the Carter administration. “It’s so reminiscent of reliving those times, where we had Mount St. Helens, we had Three Mile Island … we had the truckers rioting … Then we had the hostage crisis. We had the Soviets invade Afghanistan in December of 1979.”

Francis added: “Now you’ve got a hurricane and a million people without power in Louisiana. You’ve got wildfires in the West. You’ve got the Delta variant on Covid. Nobody could criticize him for those things, but they have a way of infecting the overall political environment. What it does is, it sours people’s attitudes, and if you’re the guy in charge, people sort of take it out on you, their frustrations, their anger, whatever it is.”

That confluence of events has Biden’s approval ratings at record lows. And Americans are also growing increasingly pessimistic about the direction of the country. In the six months immediately following Biden’s inauguration, the percentage of adults who said things have “seriously gotten off on the wrong track” dropped by about 20 percentage points. But over the past two months, that rate of dissatisfaction has climbed steadily higher, and is now above 60 percent.

“None of the things that are rearing their heads as problematic issues were caused by Biden or his administration,” said Doug Herman, who was a lead mail strategist for Obama’s presidential campaigns. “But people are upset, their kids are coming home from school with Covid quarantines, people are tired of their lives being disrupted, and at a certain point in time, there’s a political penalty to be paid, because if everybody’s angry, it’s not good for the incumbent party.”

It isn’t just Afghanistan that has harmed Biden’s standing. Public approval of his handling of the coronavirus pandemic, which had floated above 60 percent for much of the year, now rests in the low 50s, according to the FiveThirtyEight polling average. But the chaotic withdrawal of U.S. troops from Afghanistan, including the deaths of 13 U.S. service members in a terrorist attack, may prove the most damaging.

Though polls suggest Americans largely favored the policy of withdrawing from Afghanistan, they were far more critical of Biden’s handling of the exit. And for Republicans, that presented an opportunity to reopen a line of attack on Biden’s competency that they were unable to make stick during the presidential campaign.

“He sold himself on competence,” Maslin said. “I think in six months, people are not going to be attacking the policy [of withdrawal]. … But the fact that it jumped him so fast, the fact that he said it will never be like Vietnam, you’ll never see the helicopters, and it all happened, and it all happened in two weeks, I think that obviously raises questions about the very thing that he’s supposed to be best at.”

Ed Rendell, a former Pennsylvania governor and Biden ally, predicted the party would not suffer from Biden’s handling of Afghanistan in the midterms as foreign policy is unlikely to be a top issue. Still, he conceded the Afghanistan exit “did the most damage, because previously … I think people thought the Biden administration had a much higher level of competency in getting things done than the Trump administration did.”

Biden last week offered a forceful defense of the U.S. military’s withdrawal from Afghanistan, and his administration’s pivot to his domestic agenda may reframe the midterm elections for the president’s party in more favorable terms. Democrats are banking on Biden’s ability to move infrastructure and social spending plans through Congress, while continuing to push for vaccination levels that could ease the coronavirus pandemic before the elections next year. In the best-case scenario for Democrats, Covid will come under control and the economy — a likelier voting issue than foreign policy — will be roaring. Some Democrats think that’s possible.

Former New Mexico Gov. Bill Richardson, who served in the Clinton administration as Energy secretary and ambassador to the United Nations, said that “in the end, I think that these three crises that Biden is facing — Covid, Afghanistan and the hurricane — he is going to be seen as a president who can deal with crises in an efficient, compassionate way, and it’s going to be a plus.”

The timing of the crises — more than a year out from the midterm election — might also play a role in Biden’s ability to bounce back. William Owen, a Democratic National Committee member from Tennessee, said that “just from a Machiavellian standpoint, you want to get all these problems out as soon as possible. He’s only been in office eight months now, so you do these problems, get the problems out of the way to begin with, and then you deal with the day-to-day problems as they come up.”

But following a taxing summer, the implications of Biden getting the next several months right, especially in Congress, are substantial. Larry Cohen, the former Communications Workers of America president who now chairs the Bernie Sanders-aligned group Our Revolution, said progressive members of Congress he consults with express “grave concern about how we plow through what’s hopefully the last chapter of Covid — of this magnitude, anyway — and create a sense that we can have much happier lives, looking into the end of this year and the new year.”

Cohen is optimistic. But if Biden is going to put the summer of 2021 behind him, he said, a multitrillion-dollar spending plan at the center of Biden’s agenda “needs to be a turning point” for the administration. If it passes, that will give Biden — and his party — a major victory to point to just as the 2022 campaign begins in earnest.

It’s possible that, even if the electorate’s mood does not improve, voters won’t exclusively punish Democrats in 2022 — but, rather, incumbents of both parties. Public approval of Republicans in Congress was lower overall than Democrats, according to a recent Georgetown University Battleground Poll. And if voters are still comparing Biden to his predecessor — or if Trump becomes a major polarizing force in the midterm elections, as seems likely — the contrast between Biden’s and Trump’s management of challenges such as Covid may insulate the current president and his party.

“It feels like the apocalypse sometimes when you wake up and turn on the news,” said Megan Jones, a former Harry Reid adviser and Nevada-based Democratic consultant. “You’ve got Delta raging, you’ve got a fire that’s the size of New York City, and you’ve got floods. It’s all too much for everybody. But I can tell you every day I thank God that it’s Biden and it’s not Trump handling this.”

Celinda Lake, a prominent Democratic pollster who advised Biden’s 2020 campaign, said August was “a month of really bad news, and also a month of unpredictable news, and that’s made the public very depressed.”

“It’s been everything,” Lake said. “It’s fires, it’s hurricanes, it’s Haiti, it’s Afghanistan, it’s Covid, it’s the economy, it’s going back to school. But the thing is, in most cases, people don’t blame Joe Biden for this, and in some of the areas, like Covid, they still think he’s doing a good job.”

The outcome of the midterms, Lake said, may “depend on the fall, and what the Democrats and the administration can get done. … They have the potential to have a really good fall.”