Democrats want to bludgeon the GOP over its debt ceiling intransigence as much as they can — though not necessarily hard enough to shut the government down next week.

Publicly, Senate Democrats’ preferred option is to continue pressuring Republicans to buckle and accept their proposal linking government funding and a debt ceiling increase. But failing that, they say they need to ensure they avoid a momentum-draining shutdown next week amid the pandemic and internal dissent over acting on President Joe Biden’s domestic agenda.

So as the debt stalemate pushes the country toward economic debacle, several Democrats said in interviews that they’ll do whatever it takes to keep the government open — which would almost certainly involve dropping a borrowing limit hike from their funding package and starting negotiations with Republicans who’ve vowed to block any increase. Senate Majority Leader Chuck Schumer (D-N.Y.) hasn’t briefed his members on any back-up plan, but many in the party say a shutdown on their watch is not an option. 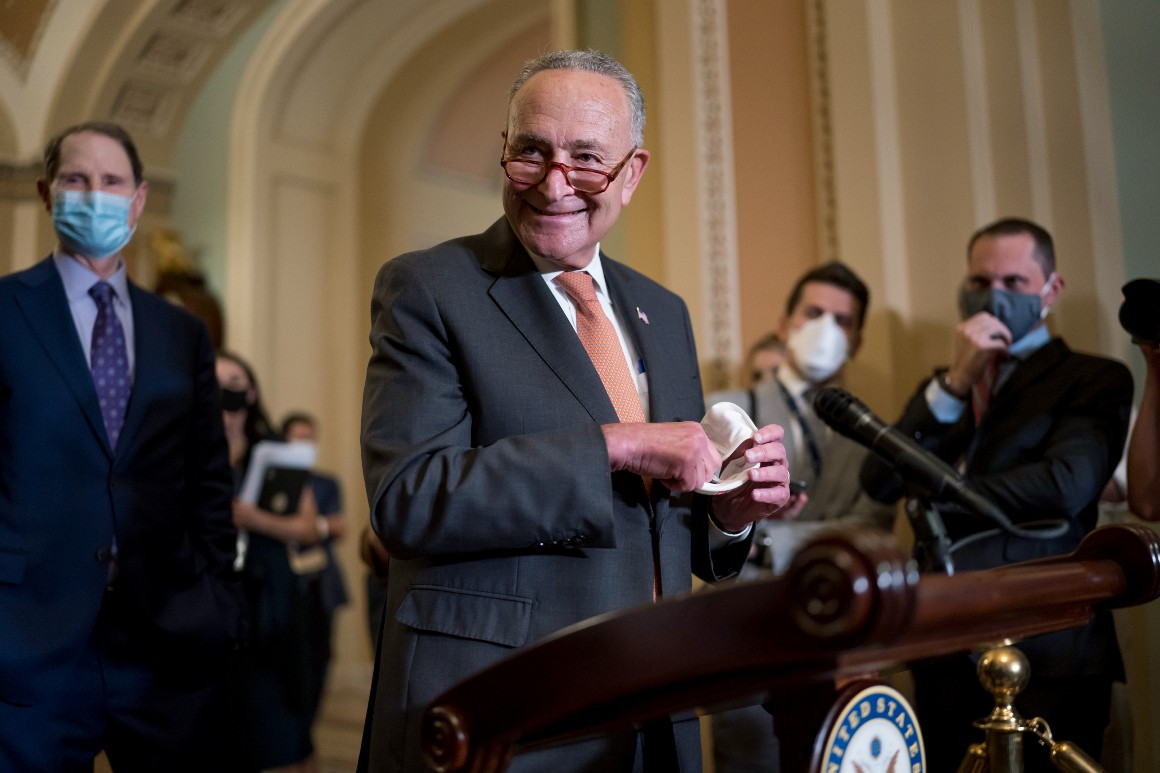 Sen. Mark Kelly (D-Ariz.), facing one of the toughest reelection campaigns next year, said that while he wants a bipartisan debt increase, “at the same time we can’t allow the government to shut down.” Sen. Tim Kaine (D-Va.) said it’s not worth a shutdown to pressure Republicans to change their mind about the debt ceiling: “We definitely want to avoid a shutdown, at all costs.”

Sen. Ben Cardin (D-Md.) said the party is “not going to give up” after it calls up a House-passed stopgap funding bill with a debt limit hike attached, a measure that’s destined to fail in the upper chamber: “There are alternatives for trying to get the debt ceiling and the [spending bill] done. I don’t know which strategy they will use next. But I know there are other strategies, if this doesn’t work.”

The early hints that Democrats are edging back from a fiscal cliff demonstrate the party’s wariness about throwing more chaos into what’s already become a calamitous September. They’re already trying to juggle internal fights over the size and scope of a historically large spending bill that includes tax increases on the wealthy, and adding a shutdown would only complicate that effort, not to mention Democrats’ efforts to defend their slim majorities next year.

“We’re going to do everything humanly possible to make sure there’s not a shutdown,” said Sen. Debbie Stabenow (D-Mich.). “The question is if we have enough Republican colleagues to join us.”

There isn’t going to be much time to maneuver. The Senate could consider the House-passed government funding bill, which lasts through Dec. 3 and suspends the debt ceiling for a year, as soon as this weekend, although Democratic sources said a vote is most likely to occur on Monday. The government is set to shut down just four days later, on Oct. 1.

If Democrats devise a spending bill that drops the debt hike, they’d have to take it up quickly and might need GOP cooperation in holding that vote before the shutdown deadline. They’d also need the House to act rapidly. That move would almost certainly punt the debt ceiling conflict into October; without action, the debt ceiling is expected to be breached before November and cause a U.S. default.

Should Democrats pursue a Plan B, they’d need to decide whether to simply delay their debt fight by passing a two- or three-week government funding bill to line up their two deadlines — or pass a longer funding bill that’s decoupled from the debt fight. In the meantime, Democrats are divided over whether to include funding for Israel’s Iron Dome missile defense system in the spending bill. Senate Appropriations Chair Patrick Leahy (D-Vt.) said he opposes including it.

And even if Congress can avoid a shutdown next week, it would still have to tackle the debt limit. Democrats could hold a standalone vote on the debt ceiling closer to the projected default date, hoping corporate America leans on Republicans to change their minds about opposing any hike.

They could also try to pass an increase along party lines via budget reconciliation, a cumbersome but filibuster-proof process that Republicans have been demanding that Democrats pursue. Some Democrats are unsure how long that would take and how viable it really is.

“I guess all options are on the table,” said Senate Majority Whip Dick Durbin, who said he’s heard no internal discussions about a back-up plan. “There’s some danger to [Republicans’] position, to the economy and to a lot of innocent people.”

Democrats previously decided not to pursue raising the debt ceiling without GOP votes, pushing instead to avoid default on a bipartisan basis. Some Democrats, like Kaine, are now conceding the party should have gone it alone.

“I wish we would have included the debt ceiling piece in the reconciliation bill, because I’m frankly just nervous about whether Republicans will go along,” Kaine said. “Of course, if the shoe were on the other foot, Democrats would go along.”

In the House, Budget Chair John Yarmuth (D-Ky.) confirmed that his staff is exploring the reconciliation option if Democrats are forced to pursue it. And if there is a shutdown while the two parties battle over the debt, Sen. Thom Tillis (R-N.C.) predicted that “it will be short-lived.”

For now, though, many Democrats want to hold the line on their party’s position, arguing that acquiescing to Republican opposition to the debt ceiling would set a terrible precedent for future fiscal fights.

“Betting on Republicans to do the right thing is an incredible long shot. And treating Republican bad faith and recklessness as if it’s a fixed aspect of American politics and asking Democrats how they’re going to navigate around it is a recipe for further hostage taking,” said Sen. Brian Schatz (D-Hawaii). “I’m not for giving in here.”

Some Democrats are less sure that Congress can avoid a shutdown next week. And others even privately contend a brief shutdown could be worth the short-term hit if it causes Republicans to vote for a debt ceiling increase on a bipartisan basis.

Many in the party see the GOP as immovable, giving them few good options for raising the debt ceiling beyond the bill the House passed on Tuesday and little hope for a different result in a few weeks.

“We always do this fucking dance,” said Sen. Jon Tester (D-Mont.). “I don’t know if people are going to put their sane minds on and do what needs to be done, or shut it down. This is just a ridiculous exercise … I can’t even compare it to anything I do on the farm that’s this stupid.”

Sarah Ferris and Caitlin Emma contributed to this report.