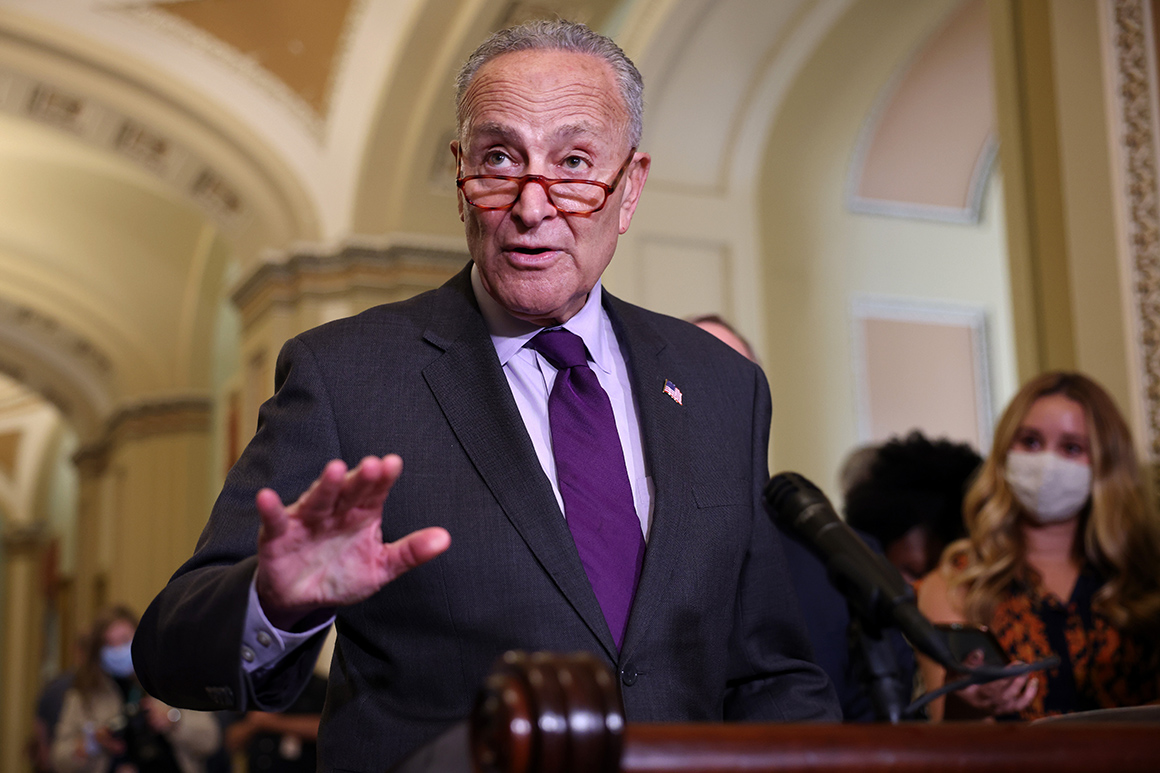 The House and Senate return to Washington together this week with Democrats facing four tasks that would be challenging on their own — but, taken together, are the legislative equivalent of Hercules’ labors.

Sen. Mark Warner (D-Va.) summed up the party’s wildly urgent to-do list with the drama of a movie trailer: “Keep the government open. Don’t default on the debt. Make sure the president gets a win on the infrastructure bill … and, obviously the mother of all legislation, the reconciliation package,” he said, referring to the mega-bill that Democrats want to pass along party lines to spend trillions of dollars on a panoply of social priorities.

“Failure is not an option,” Warner added.

But for all of the party’s awareness of what it needs to do, Democrats are uncertain about how to get it all done. The coming three-week legislative sprint will test their slim majorities and President Joe Biden’s domestic policy chops, with dwindling days to avoid a government shutdown and defuse a politically toxic battle with Republicans over the nation’s borrowing limit.

Speaker Nancy Pelosi and Senate Majority Leader Chuck Schumer are also under intense pressure to deliver on the lifeblood of Biden’s agenda: a multitrillion-dollar social spending package and a bipartisan infrastructure bill, which could both see floor votes in the coming weeks.

Already, ideological clashes across the Democratic Party have begun to spill into the open as it begins its final push to turn Biden’s enormous spending plan into law. Last week, a small group of moderates sank a leadership-backed drug pricing initiative in a high-profile committee meeting as they demanded to vote on their own version of the bill.

Across the Capitol, Sens. Joe Manchin (D-W.Va.) and Kyrsten Sinema (D-Ariz.) have said they will not support legislation that costs $3.5 trillion, setting up a skirmish with progressives who say that top line number is already a compromise. Some Democrats fear those two moderates may not be willing to support the final bill at all.

Meanwhile, leaders of that progressive bloc in the House are publicly vowing to block the Senate-passed infrastructure bill scheduled for a vote later this month unless the gargantuan Democrats-only spending plan advances in both chambers — the latest sign of a big-tent party gone wobbly over competing priorities.

House Majority Whip Jim Clyburn acknowledged on CNN’s “State of the Union” Sunday that party leaders may need to veer from their original plan — a floor vote on that infrastructure bill by Sept. 27 — since their broader bill is unlikely to be ready. His remarks come after Democratic leaders acknowledged Friday they were concerned about the lacking support from the left.

But one of those nine moderates who had demanded that timeline, Rep. Ed Case (D-Hawaii), said Sunday that he was staunchly opposed to an alternative date.

“We are expecting a full House vote on [Sept. 27]. That was a personal commitment from our leadership,” Case said in an interview. “Many people would like the vote to be put off. That’s not what the commitment is.”

The Hawaii Democrat also expressed skepticism that his more liberal colleagues would be willing to vote down a key Biden priority that would also deliver the largest-ever infusion of cash for infrastructure.

“I think at the end of the day, when you’re faced with an up-or-down vote on the floor of the House, you’re going to vote for it,” he said. “That’s a serious no vote.”

But while senior Democrats acknowledge the weeks ahead are lined with landmines, they argue that members across the party will pull together in the end and not squander a once-in-a-decade chance to enact social reforms such as universal child care, paid family leave and expanded health care programs.

And they say they’re confident Democratic leaders will be able to avert the worst-case scenarios — a shutdown or a default on U.S. debt — even if the exact strategy isn’t clear yet.

“It’s crunch time. … Everyone is going to use every ounce of leverage they have. I think that’s fine,” said Rep. Dan Kildee (D-Mich.). “However, we all know that the worst scenario is one where we do nothing.”

House Democrats are expected to unveil the first prong in that plan early this week, when they release a stopgap spending bill to fund the government through December and, likely, suspend the nation’s borrowing limit. The text hasn’t been made public yet, but leadership is eyeing Dec. 3 as an end date, according to people familiar with the discussions. And a measure to hike the debt limit is expected to be included despite staunch Republican opposition.

Pelosi, in a letter late Sunday, reiterated how increasing the debt limit has been a bipartisan endeavor for the last decade, including during the Trump administration.

“When we take up the debt limit this month, we expect it to be bipartisan once more,” Pelosi wrote.

Senate Minority Leader Mitch McConnell has flatly rejected Biden’s calls to work together on the debt limit, arguing that Democrats have the means to address it on their own using reconciliation. Democrats counter that moderates oppose suspending the debt limit using a party-line process and that much of the debt now prompting the urgency was incurred during the Trump administration.

Clyburn on Sunday acknowledged Democrats might ultimately have to address the debt issue without Republican assistance, something Democratic leadership has refused to publicly acknowledge so far.

“I’m not fine with that, but if that’s what it takes, that’s what it will take,” Clyburn said on CNN. House Majority Leader Steny Hoyer has also privately discussed other legislative vehicles to address the debt limit if Senate Republicans block the current plan.

The House Rules Committee will meet Monday to tee up that spending bill, which must be signed into law by Sept. 30 to keep the government running.

Democratic leaders must simultaneously try to keep their vast social policy bill on track for quick passage — a bill many see as pivotal for proving the party’s governing prowess ahead of the 2022 midterms. And with Biden’s approval rating hitting a new low, party lawmakers — particularly those from competitive districts — are intent on delivering the administration a win. Schumer’s office has cautioned Democratic staff to prepare to work late nights and weekends.

Key committees in the House have already been working late into the night, with the House Energy and Commerce Committee working on their piece of the sweeping bill for more than 50 hours last week. However, Senate panels are still drafting legislative language, despite Schumer’s aspirational deadline for committees to complete their work by Sept. 15.

House Democratic leaders have insisted they will have Biden’s sprawling social spending plan ready for a vote before October. But that timeframe is expected to slip, and the House Budget Committee acknowledged it is not planning to mark up its portion of the bill next week, according to a Democratic aide.

That could leave Pelosi and her leadership team with a progressive rebellion on their hands. Leaders on the left are vowing to vote against the infrastructure bill unless the broader party-line plan has also moved through both chambers.

House Budget Chair John Yarmuth (D-Ky.) acknowledged on Sunday the political reality that is creeping up on Democrats.

“There’s some flexibility in terms of how we mesh the two mandates. … One of them is the vote on that on the 27th. The second one is to not pass one without the other,” Yarmuth said on Fox News Sunday.

“I would say we’re probably going to slip past the Sept. 27 date, sometime into early October would be my best guess.”

Caitlin Emma and Jennifer Scholtes contributed to this report.