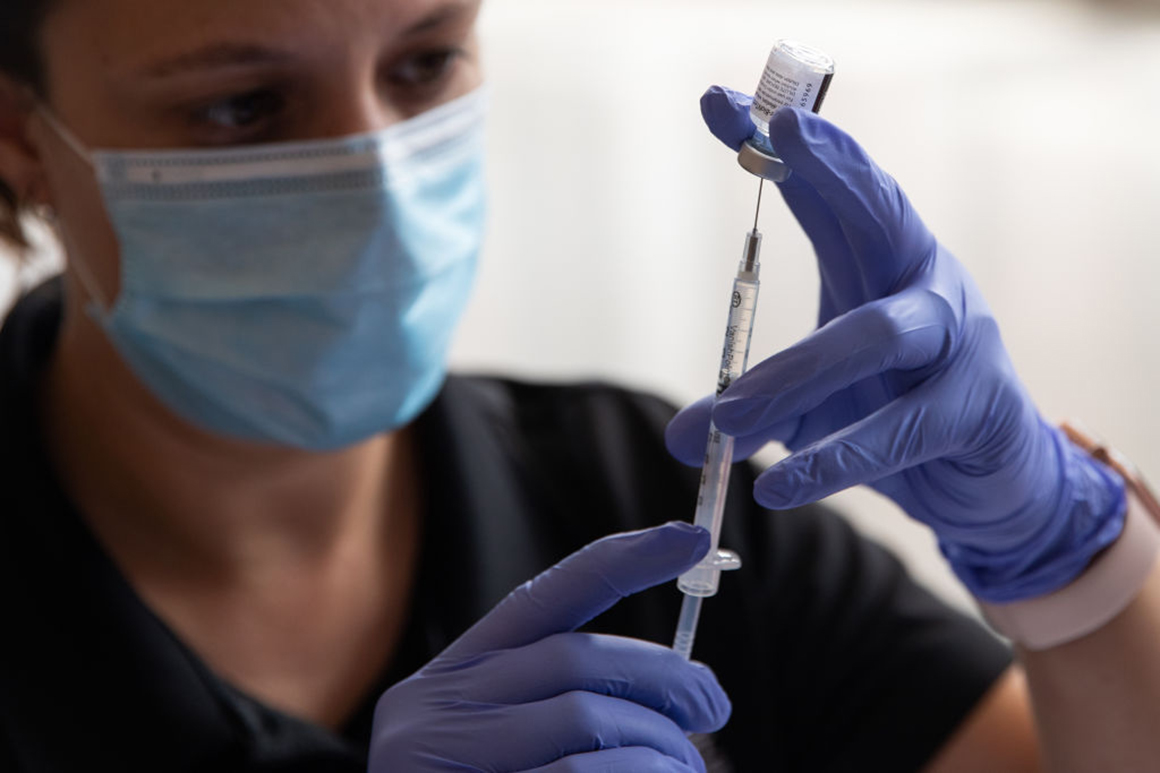 The Food and Drug Administration authorized a booster dose Wednesday of Pfizer and BioNTech’s Covid-19 vaccine for people 65 and older and for certain high-risk adult populations.

The move aligns with the recommendation the agency’s independent vaccine advisers made Friday when they endorsed offering boosters to people at high risk of severe disease as well as those 65 and older at least six months after completion of the primary two-dose series.

The FDA authorization permits Pfizer boosters for anyone between the ages of 18 and 64 “whose frequent institutional or occupational exposure to SARS-CoV-2 puts them at high risk of serious complications of COVID-19 including severe COVID-19.”

It notably excludes 16- and 17-year-olds — who Pfizer had included in its booster application to the agency — in an apparent nod to the lack of data on the safety of an additional dose for younger people. Pfizer’s and Moderna’s messenger RNA vaccines have been associated with rare cases of myocarditis, an inflammation of the heart muscle, after vaccination. The side effect typically occurs in males 30 and younger.

The Centers for Disease Control and Prevention’s own outside advisers are convening a meeting at noon on Thursday to further refine how the Pfizer-BioNTech booster should be administered. It will culminate in a vote to endorse the shot’s use. That panel is expected to further define who should be considered at “high risk” for severe disease and which occupations should qualify individuals for boosters.

Acting FDA Commissioner Janet Woodcock indicated in a statement that those workers may include health care workers, teachers, day care staff and grocery store workers, among others. Depending on how the CDC committee whittles down the “high risk” definition — and whether they advise providers to verify a patient’s status — far more Americans could be eligible for boosters than FDA’s announcement suggests.

In making its decision, FDA said it considered data from a subset of participants in Pfizer’s original clinical trial and real-world data from domestic and international sources — including information from Israel. Pfizer and Israeli scientists touted the country’s summertime booster program as integral to staving off crunched hospital capacity given a rash of breakthrough infections that began about six months after its oldest citizens were fully immunized.

But some independent advisers to FDA took issue with limitations in that data and noted it yielded no insight into the safety and efficacy of booster doses in young people, given the truncated follow-up period.

An FDA-requested analysis by Pfizer shows that the incidence of Covid in July and August, when the Delta variant became the dominant strain in the U.S., was higher among trial participants who were fully vaccinated earlier in the study compared to those who completed their initial series later.

“The FDA determined that the rate of breakthrough COVID-19 reported during this time period translates to a modest decrease in the efficacy of the vaccine among those vaccinated earlier,” the agency said.

Pfizer Chairman and Chief Executive Officer Albert Bourla praised the FDA decision as a “critical milestone” in fighting the pandemic. “We believe boosters have an important role to play in addressing the continued threat of this disease, alongside efforts to increase global access and uptake among the unvaccinated,” he said in a statement.

The Biden administration had hoped to begin a broader booster rollout this week, after top federal health officials endorsed the idea of offering third dose of the Pfizer-BioNTech and Moderna Covid-19 vaccines to most adults on that timetable. But in the weeks after that announcement, scientists in and out of the federal government pushed back against the idea, arguing there was not convincing evidence for the plan.

Two of FDA’s top vaccine regulators decided to retire from the agency, at least in part over disagreements related to the administration’s booster timeline.

FDA’s vaccine advisory panel threw a wrench in the administration’s original booster plans on Friday when its members rejected the notion of fully approving the Pfizer-BioNTech booster for people 16 and older, citing concerns about the quality of existing data on safety and effectiveness. The panel instead endorsed narrower use of the shot.

FDA granted full approval to the Pfizer-BioNTech vaccine for people 16 and older on Aug. 23. The shot remains available under an emergency use authorization for teens 12 to 15.