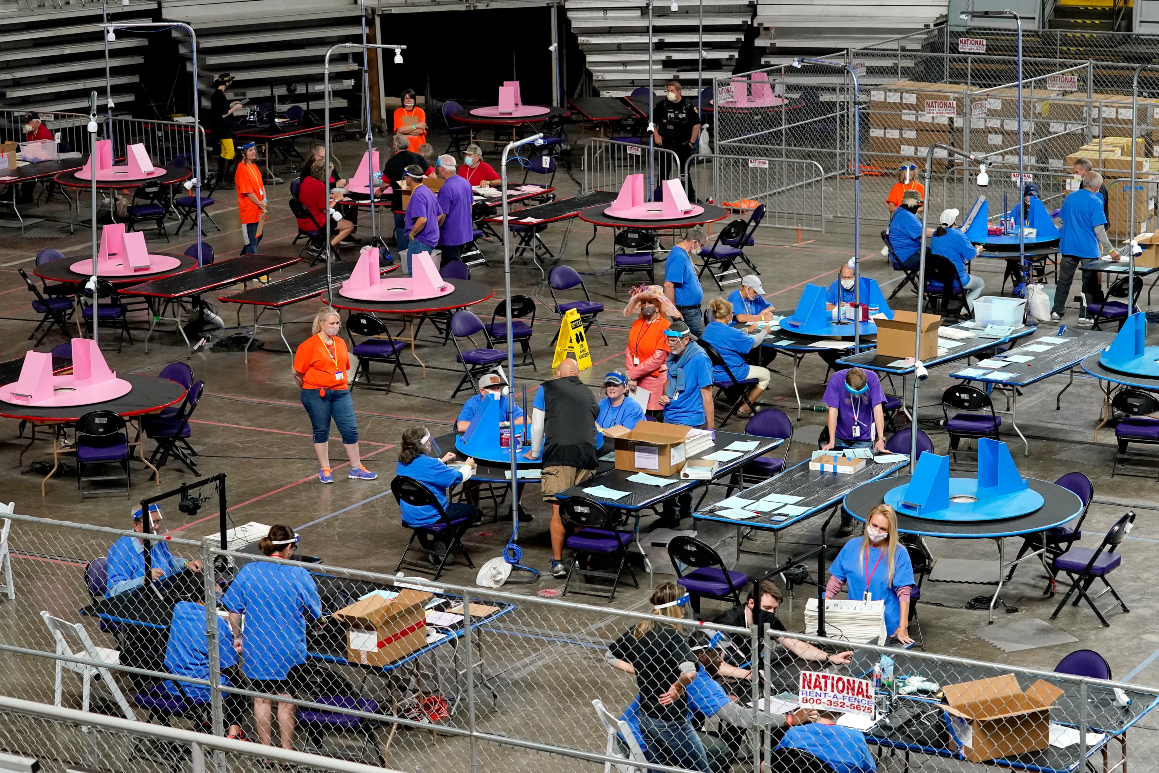 A hand tally from a controversial review of the 2020 election results in Arizona’s largest county closely tracked the official canvass, according to a draft copy of a report expected to be delivered later on Friday.

The tally from the review, which was backed by the Republican-controlled state Senate but has no bearing on President Joe Biden’s long-official victory in the state, found Biden defeated former President Donald Trump in Maricopa County by about 45,000 votes, a slight increase of Biden’s margin from the official count.

The review in Arizona has played a central role in Trump’s mythology that he won the 2020 election. Since leaving office, Trump has repeatedly spread the lie that he did not lose the election, and has sought to undermine confidence in the American democratic system.

County officials from Maricopa, whose county board of supervisors is controlled by Republicans and whose top elections official is also a Republican, celebrated the draft report as vindication of their election results.

“You don’t have to dig deep into the draft copy of the Arizona Senate/Cyber Ninja audit report to confirm what I already knew — the candidates certified by the Maricopa County Board of Supervisors, Governor, Secretary of State and Attorney General — did, in fact, win,” board chair Jack Sellers, a Republican, said in a statement. “This means the tabulation equipment counted the ballots as they were designed to do, and the results reflected the will of the voters. That should be the end of the story.”

POLITICO reviewed copies of a draft report circulated by the Maricopa county recorder’s office and the Arizona secretary of state’s office, both of whom have consistently opposed the effort in the state. Arizona media outlets — including the Arizona Republic, KJZZ and the newsletter Arizona Agenda — all previously reported on various drafts of the report.

A spokesperson for the secretary of state said the office can’t speak to the authenticity of the draft, and declined to share how the office received a copy of it. But a spokesperson for the effort told the radio station that their draft was “not the final report, but it’s close.” Requests for comment from POLITICO sent to a separate review spokesperson and Doug Logan — the head of Cyber Ninjas, the firm contracted by the state Senate to run the effort — were not immediately returned early Friday morning.

A final report release and a hearing is scheduled for Friday afternoon in Arizona.

The Arizona review has been marred by significant problems, stretching on for months past its initial expected runtime, while seemingly improvising processes on the fly and playing into conspiracy theories that included checking for bamboo fibers in ballots. The effort was also significantly funded by allies of Trump.

Election officials in the state and outside experts have opposed it nearly every step of the way, and derided the “audit” label supporters attached to it. Logan, who is leading the effort, has echoed some of Trump’s conspiracy theories, and has no discernible experience running or reviewing elections.

Nevertheless, the near-matching tally will likely not stop Trump and his supporters from further attacking America’s democratic system. The draft report claimed irregularities with tens of thousands of ballots, and suggested changes to the state’s election law “that tightens up the election process to provide additional certainty to elections going forward.”

“Everybody will be watching Arizona tomorrow to see what the highly respected auditors and Arizona State Senate found out regarding the so-called Election!” the former president said in a statement, hours before the draft report was made public.

The Arizona effort has also inspired copycat reviews or investigations in states across the country, including efforts backed by GOP legislative leaders in Pennsylvania and Wisconsin. Most recently, Texas’ secretary of state’s office announced Thursday night it would be reviewing the 2020 election in four of the state’s most populous counties, after Trump publicly released a letter to GOP Gov. Greg Abbott calling for one earlier in the day.

Trump has also pressured Republican officials across the country to tout his lies about the election, often lashing out against Republican election officials who said their elections were not rigged. He has backed Republicans seeking to become their state’s secretary of state who have parroted those falsehoods — including state Rep. Mark Finchem, a major proponent of the review in Maricopa.