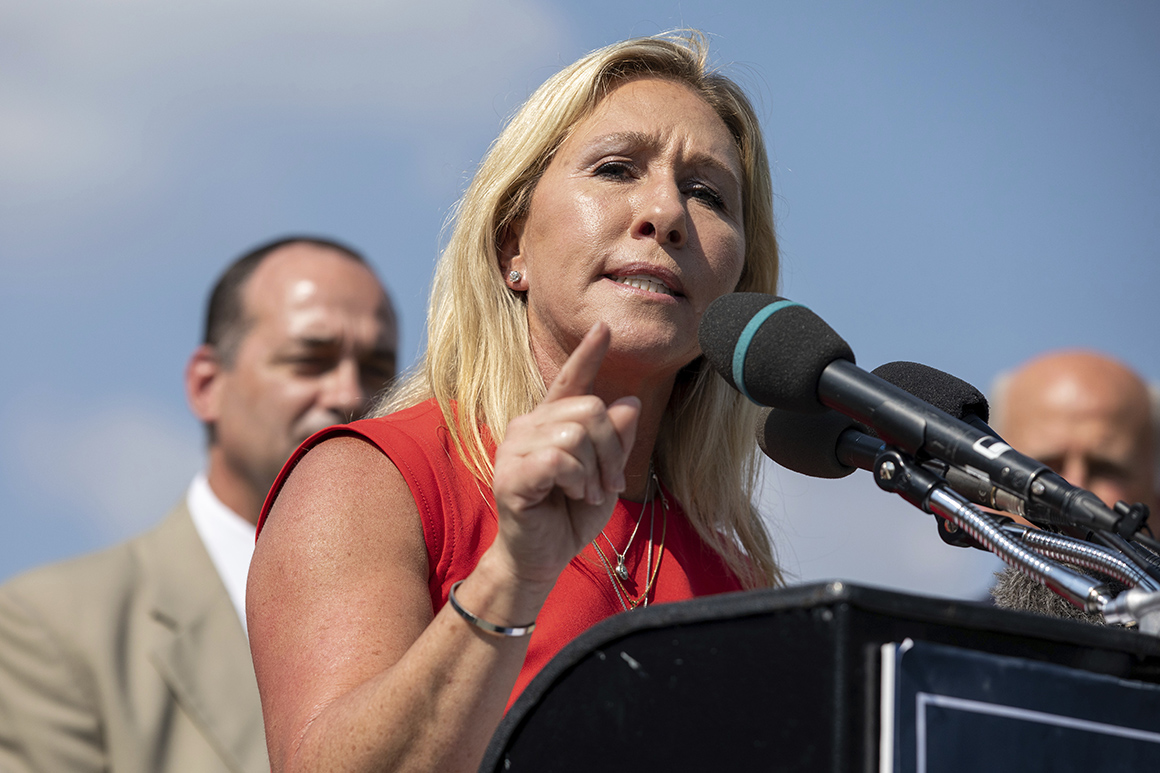 Amid rising concerns on the Hill about potential violence during a Sept. 18 rally defending those arrested during the Capitol riot, two well-known House conservatives who have described some Jan. 6 insurrectionists as “political prisoners” say they’re not planning to attend this month’s event.

Reps. Marjorie Taylor Greene (R-Ga.) and Madison Cawthorn (R-N.C.) expect to skip the so-called “Justice for J6” rally on Sept. 18, according to the GOP duo’s spokespeople. Matthew Braynard, a former Trump campaign official organizing the event at the foot of the Capitol, has publicly invited all lawmakers to attend, but Cawthorn and Greene — two of the most vocal elected Republicans who have said some who breached the Capitol were unfairly prosecuted — would have been VIP attendees.

A spokesperson for Rep. Matt Gaetz (R-Fla.), another close Trump ally, did not immediately respond to requests for comment.

As the rally draws closer, congressional security officials are beginning to prepare for potential risks amid heightened scrutiny of lapses in the response to the violence of Jan. 6’s riot led by supporters of former President Donald Trump. While final security decisions had not yet been made on matters like whether to restore the Capitol fencing that recently came down, House Administration Committee Chair Zoe Lofgren (D-Calif.) was set to receive a briefing from Capitol Police Chief Thomas Manger Wednesday afternoon, according to a source familiar with the meeting.

And Speaker Nancy Pelosi invited House Minority Leader Kevin McCarthy, Senate Majority Leader Chuck Schumer, and Senate Minority Leader Mitch McConnell to a meeting with Manger in her office about security preparations on Monday. Pelosi told reporters earlier Wednesday she would not get into the specifics of Capitol security, but said: “We intend to have the integrity of the Capitol be intact.”

Braynard dismissed the possibility of violence at his rally, saying his group held “two similar rallies in D.C. at the Department of Justice and at the prison where these political prisoners are being held. These events occurred without incident.”

While Braynard declined to share whether any members of Congress have confirmed they plan to attend, he told POLITICO that organizers would announce speakers “when ready.”

The Capitol Police declined to comment on Braynard’s assertion about cooperation with private security or elaborate on the department’s preparations for the Sept. 18 rally. The Metropolitan Police Department said in a statement it would be “fully prepared,” including plans to have an “increased presence around the city” and possible “street closures for public safety.” The Park Police did not immediately respond to a request for comment.

A federal law enforcement official speaking on condition of anonymity said the Department of Homeland Security, the FBI, and other agencies in the National Capitol Region were tracking the rally, though it was unclear how widely attended it would be.

Hill security officials could opt to restore the tall fencing that ringed the Capitol in the aftermath of the Jan. 6 insurrection. The barriers stayed up until the beginning of July despite criticism from lawmakers on both sides of the aisle who opposed the closure of open access to the Capitol. Some Capitol Police officers, on the other hand, had supported the fencing.

“When the fence came down, that was hard. When we lost our layer of protection that we had, and the fence came down and still nothing has changed,” Capitol Police officer Harry Dunn said during the Jan. 6 select committee’s first hearing.

Prosecutors have arrested more than 600 alleged members of the mob that breached the Capitol on Jan. 6, and more than 60 have pleaded guilty for their actions. More than 150 defendants have been charged with assaulting or impeding police during the breach, and prosecutors say more than 1,000 assaults were committed that day.

A small subset of those arrested have been held in prison while they await trial, deemed too dangerous by judges — appointed by presidents of both parties — to remain in the community while they fight the charges against them. Lawmakers who have decried the treatment of these defendants have not identified specific cases they believe to be unfair or inappropriate.

Reps. Louie Gohmert (R-Texas) and Paul Gosar (R-Ariz.) had joined Greene and Gaetz for a protest outside the Department of Justice at the end of July, though protesters disrupted their event.

Spokespeople for Gohmert and Gosar did not immediately respond to a request for comment on whether they would attend the Sept. 18 rally.

Heather Caygle and Betsy Woodruff Swan contributed to this report.