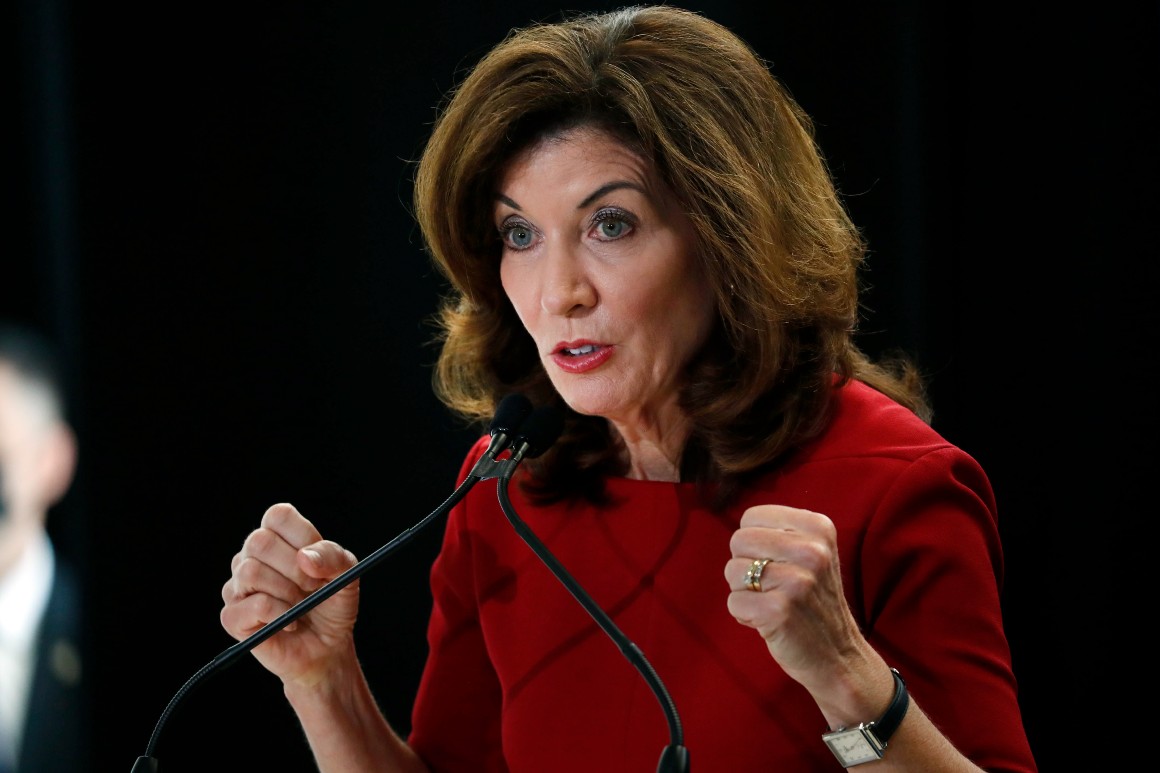 ALBANY — New York Gov. Kathy Hochul, attempting to head off a potential housing crisis, is facing the first test of her vow to bring a new collegial spirit to Albany after summoning lawmakers back to the state Capitol on Wednesday for an “extraordinary“ special session.

Hochul, a Democrat, has been the state’s chief executive for a week, taking over from Andrew Cuomo on Aug. 23. She has put in an appearance at the State Fair in Syracuse, given her first Covid briefing from her home town of Buffalo and rushed to New York City to be on site when a power failure disrupted subway service over the weekend.

Wednesday, however, will be the first time she deals with lawmakers on a substantive issue as governor. She set the agenda for the session, and in doing so sent a signal to the left wing of her party that she is on board with their priorities — a key maneuver as she prepares for an almost inevitable primary challenge from a downstate progressive in next year’s gubernatorial election.

In addition to acting on housing issues, the governor said she will make key appointments to the Office of Cannabis Management and Cannabis Control Board, which will oversee legalized marijuana in New York. The process stalled under Cuomo. The session will also offer her a chance to reset relations between the executive branch and state legislators, who were on the verge of impeaching Cuomo before he resigned last month in the aftermath of a sexual harassment scandal.

During his decade as governor, Cuomo developed a reputation as a tough negotiator, pushing his agenda and maneuvering to take credit for achievements even if the ideas originated elsewhere. The state’s annual budget season, which runs from January to the end of March, was a virtual slug-fest as Cuomo promoted his own priorities and extracted concessions from legislative leaders for their own.

“With Andrew Cuomo it always felt like a game where there were winners and losers, and credit and blame,“ said Senate Deputy Majority Leader Mike Gianaris, who often clashed with Cuomo. “But if we all feel like we’re in the same boat rowing together, there’s a much greater possibility that we come up with a productive result.“

The agreement to address the eviction moratorium and accelerate rental aid appears to reflect that commitment, some lawmakers said. That state has been among the slowest in the country to distribute federal housing assistance, and the Supreme Court’s decision to strike down the Biden administration national eviction moratorium had created an urgent need to renew New York’s ban.

Hochul appeared to work with the leaders of both houses of the Legislature to come to terms on the legislation before calling lawmakers back to the Capitol.

“It already looks promising because I think that she is already working with the two leaders in a much more democratic way,” said Assemblymember Emily Gallagher, a Democrat from Brooklyn who was elected in 2020. “It seems like she’s giving us more real information to work with.”

New York City Public Advocate Jumaane Williams, a Democrat who is considering a run for governor next year, said he’s pleased to see that the housing crisis will be addressed. He said Hochul needs to make sure that rental aid is sent out more quickly.

“We do have to get some additional money into the program and get it out quickly,” he said. “People who need this assistance the most have to jump through the most hurdles… Right now we’re in a crisis situation and we have to get this out there ASAP.”

“From where we came from it’s an amazingly low bar, so I’ll be happy to see anyone clear that,” he said.

The state’s eviction moratorium expired on Tuesday and already had been weakened by a Supreme Court decision last month that struck down a portion of the measure.

The court ruling “created this sense of fear and anxiety among people who — through no fault of their own — lost their jobs during a pandemic. The jobs evaporated,” Hochul said during a press conference in Buffalo on Tuesday. “We have to take action and take action now. There are too many people in the state of New York… stressed out right now because they cannot make those payments.”

Hochul has urged people to apply for the emergency rental assistance to trigger an additional year-long hold on evictions.

The session presents Hochul with a political opportunity. Averting an eviction crisis and helping people stay in their homes is a top priority for many progressive groups and is especially relevant in New York City where a majority of people rent.

Hochul faces a host of challenges in the next few months that could influence her chances of winning her party’s nomination next June. Camille Rivera, a progressive consultant with New Deal Strategies, said housing is just one issue those on the left want to see the governor tackle.

While Hochul promised a more transparent administration, the deal-making process in Albany remained much the same with lawmakers expected to vote with little notice on bills that were not public as of Wednesday morning. Hochul is expected to send “messages of necessity” that allow the Legislature to skip a three-day aging period for bills. Such maneuvers have long been criticized by good government groups for limiting public scrutiny of measures negotiated in secret.

Still, the steps Hochul has taken to avoid conflict with lawmakers this week struck many as a sharp change from the brute-force approach employed by Cuomo and many of his predecessors, all of whom were men.

Assemblyman Richard Gottfried, a Democrat from Manhattan and the longest-serving lawmaker in state history, has witnessed more than a half-dozen governors come and go since the early 1970s. He recalled a few contentious and unproductive special sessions called by the late Gov. Mario Cuomo, including one that lasted nearly a year and another held in December that continued after Christmas but never resulted in any legislation.

“What’s going on is really radically different from that. Both houses are eager to work with the governor on this issue,” Gottfried said. “There’s a lot of good faith, open negotiation going on.”

He noted that there are geographic divisions between lawmakers whose districts contain a majority of apartment renters versus those who represent areas where two-family homes are a key part of the housing stock. But those issues are being worked out internally, Gottfried said.

“I haven’t heard any issues raised as being a dispute between the Legislature and the governor,” he said. “This is one more good sign about improving the atmosphere and getting things done in Albany.”