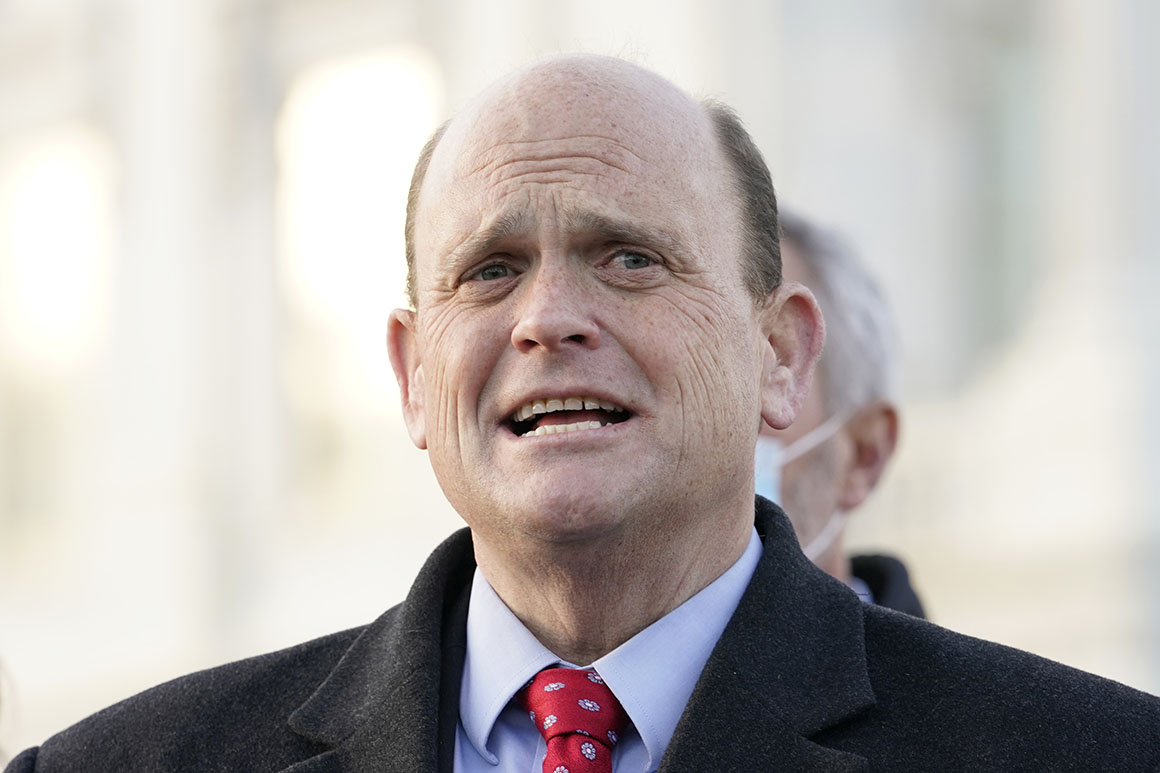 If House Democrats keep pushing their two-track plan for a party-line social spending bill and a bipartisan infrastructure bill, they can’t expect many GOP passengers on that second train.

Fewer than a dozen House Republicans are expected to vote for the $550 billion infrastructure bill — which got 19 Senate GOP votes last month — according to multiple lawmakers in the party. But the infrastructure measure’s House GOP support could triple if Democrats detach its fate from a party-line social spending bill with a multitrillion-dollar price tag, several House Republicans estimated in Monday interviews.

Those numbers are still in flux, the members said, addressing the closely held vote count candidly on condition of anonymity. But the fluidity of the situation illuminates the plate-spinning act that House Democratic leaders are trying to pull off: Depending on how many of their progressives withhold votes from the infrastructure bill, an unexpected uptick in GOP support on the floor could upend the careful plans of President Joe Biden’s party.

“If the $3.5 trillion reconciliation push dies, there will be more GOP support,” said centrist Rep. Don Bacon (R-Neb.), referring to the filibuster-proof process Democrats are using for their separate social spending bill. Bacon, a member of the bipartisan Problem Solvers Caucus, said its members would lend a hand on infrastructure “if there is a standalone vote.”

Of course, Democrats are staying yoked to what they’ve called their two-track approach: linking the infrastructure bill crafted by their centrists to a bigger, progressive-leaning measure that would expand Medicare, boost paid leave and fight climate change. But as that latter reconciliation push teeters amid growing intra-party Democratic discontent, the possibility of two dozen or more House GOP votes for the Senate’s infrastructure deal gives centrists a powerful argument in favor of detaching the tracks.

Problem Solvers Caucus co-chair Rep. Brian Fitzpatrick (R-Pa.), retiring Rep. Tom Reed (R-N.Y.) and Rep. Fred Upton (R-Mich.) are among the House Republicans expected to vote for the infrastructure bill regardless of what Democrats do, according to fellow GOP centrists. As one moderate House Republican put it, the “typical ones” in the conference are set to vote yes.

But Republicans aren’t certain if the infrastructure vote will even happen by Sept. 27, as Speaker Nancy Pelosi indicated following a rebellion last month by a handful of her own centrists. Moderate and progressive Democrats have split on how to proceed with the infrastructure bill, with Sens. Kyrsten Sinema (D-Ariz.) and Joe Manchin (D-W.Va.) coming out against a bill that costs $3.5 trillion and threatening to derail progressives’ efforts. 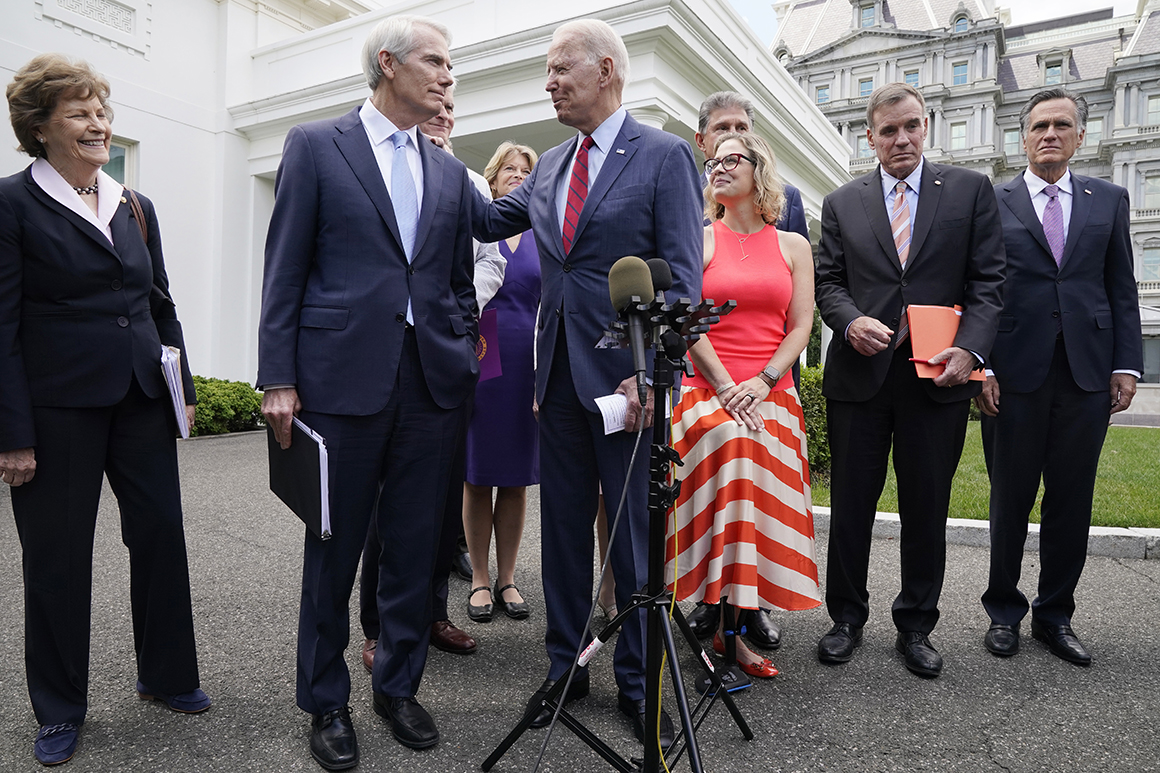 While Democrats jockey among themselves, House Republicans are starting to confront consequential new internal dynamics of their own. Some in the GOP say they’re noticing blowback from the party base, particularly aimed at the GOP senators who backed the infrastructure bill. That conservative wrath may ultimately have a chilling effect on some House Republicans who are still weighing whether to support the infrastructure plan if Democrats detach it from the party-line bill.

Amid the growing sentiment on the right that voting for infrastructure could help the Biden White House at an inopportune time — with the president’s approval ratings falling after the chaotic U.S. withdrawal from Afghanistan — there could be less appetite in the House GOP to vote yes when the time comes.

“The senators that voted for the infrastructure bill — I can’t imagine how they’re being treated by the base in their home states,” said one House Republican lawmaker from a safe GOP district, speaking candidly on condition of anonymity. “[Lawmakers] have caught more crap for that infrastructure vote, just because it’s perceived as you’re trying to help Biden right now. If you’re doing anything, you should be trying to impeach Biden, in the eyes of the base.”

What remains unclear is how House GOP leadership handles a potential standalone vote on infrastructure. Minority Leader Kevin McCarthy has not tipped his hand to his members whether his team will whip against the bipartisan infrastructure bill, which the California Republican has stated he personally opposes, if Democrats decouple it from their reconciliation plan.

McCarthy, for his part, is messaging that the infrastructure and social spending bills are inextricably linked, despite the possibility that Democrats could be forced to move the former without the latter.

“I view it as one combined,” McCarthy said in a brief interview Monday. “I don’t see how it’s standalone when Pelosi talks about holding it all together.”

GOP leadership has not communicated to its members how it would handle a standalone vote on infrastructure, according to multiple sources. They say they are waiting to see how Pelosi and Democrats move forward.

And the number of GOP votes for the infrastructure bill may yet climb higher by the time it comes to the House floor. Rep. Dusty Johnson (R-S.D.) told Fox News on Monday that “between 50 and 100 Republican votes” could materialize if the Senate-passed legislation were decoupled from the party-line bill.

Another moderate Republican agreed that the numbers could climb higher, saying building trades, the Chamber of Commerce, and the Business Roundtable are believed to be urging lawmakers to vote yes.

“We’re working hard against the $5 trillion package. Now, ultimately how Pelosi brings it to the floor — they haven’t even made the decision — but we’re against that big spending package that will increase inflation and raise taxes,” said House Minority Whip Steve Scalise (R-La.).

Some members on the conference’s right flank say they hope leadership does formally oppose the bipartisan legislation, even if it is separate from the reconciliation bill.

“I don’t know what they’re gonna do,” said Ohio Rep. Jim Jordan, the top Republican on the House Judiciary Committee, who added that he hopes leaders whip a no vote. “We’re all against it.”

Some Republicans are even targeting moderate Republicans with their messaging. Rep. Marjorie Taylor Greene (R-Ga.) is actively threatening to financially help primary challengers to Republicans who vote to support the infrastructure bill. In addition to pushing her position on social media and TV hits — which has reportedly led to a spike in her donations — Greene has also texted a private group text chain for the freshman GOP class to notify her colleagues about her intentions.

Some fellow Republicans, disgruntled by Greene’s move, are privately grumbling that she’s lost sight of their foremost priority: winning back the House next year.

Greene, who said the fundraising from her primary promise has been “amazing,” disputed any claim that she is hurting her party’s efforts to retake the majority by holding on in more purple districts than her own.

“We have to have the right Republicans,” she said.