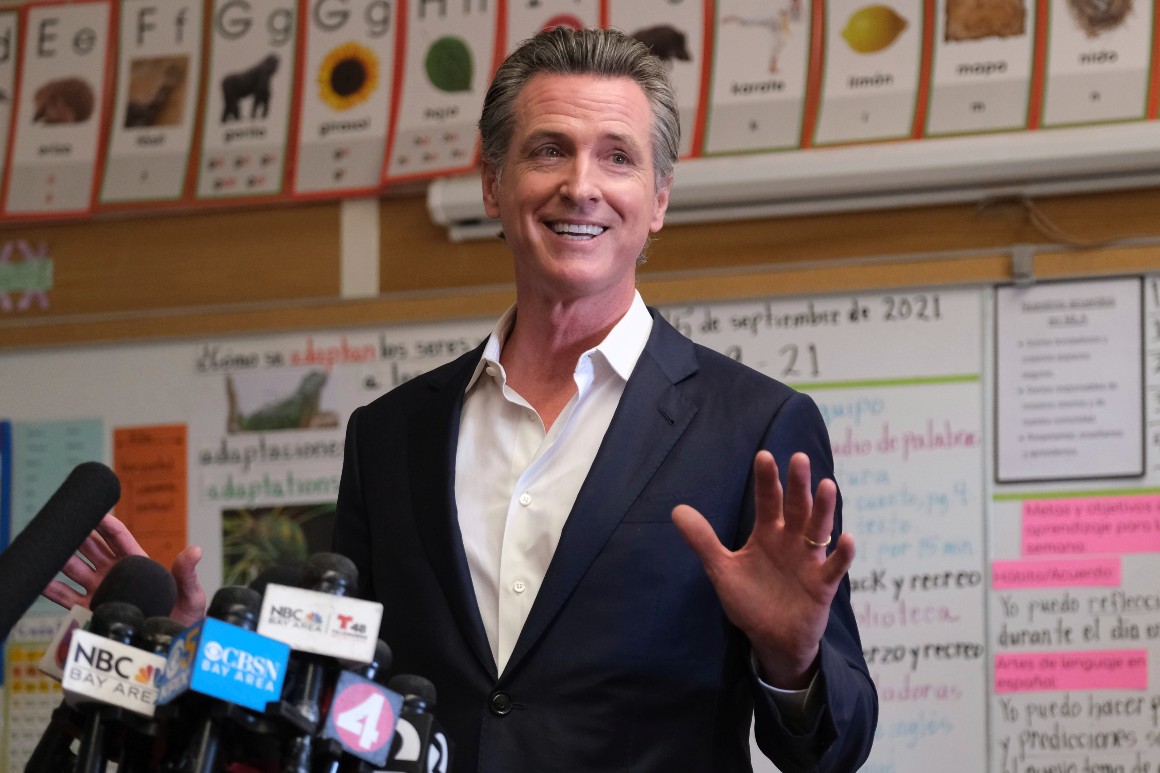 SACRAMENTO — In the end, California’s recall amounted to a $276 million exercise that dealt state Republicans a blow heading into next year’s elections.

Gov. Gavin Newsom resoundingly defeated the recall attempt Tuesday night by a margin wider than thought possible a month ago, landing on a winning message that energized his base while he laid the groundwork for 2022 voter outreach in battleground areas as he is up for reelection.

Republicans must quickly regroup and assess their chances at defeating a newly emboldened Newsom at the same time they strategize to score wins in congressional and downballot races.

While good for Elder, Tuesday’s election suggests it’s even better for Newsom. The Democratic governor effectively framed the recall as a head-to-head race against Elder and tethered the GOP candidate to former President Donald Trump, who remains deeply unpopular in the state. As of Wednesday, 64 percent of voters chose to keep Newsom in office.

California counties have processed nearly 9.2 million ballots so far, and it won’t be clear until Thursday how many are left to count statewide. The state allows seven days for ballots to arrive in election offices as long as they’re postmarked by Election Day, and the state elections chief is giving counties until Thursday to give an estimate on outstanding ballots.

Here are five things to watch in the coming months:

The Elder conundrum for Republicans

Elder was such a gift to Newsom that even many Republicans acknowledged he was tanking what little shot the GOP had at recalling the governor.

But it was Elder, easily portrayed by Newsom as a Donald Trump clone, whom the Republican base loved. Faulconer and other more moderate Republicans didn’t stand a chance.

In a state where Democrats outnumber Republicans nearly 2 to 1, the answer would seem to involve running a Republican who could peel off some Democratic and independent votes — and also have enough money to self-finance a credible campaign.

That might not work, anyway, in a state as Democratic as California. Meg Whitman lost in 2010, after all. And in the modern GOP, there may not be another chance. After Tuesday, Elder is the undeniably the party’s standard-bearer in California.

“Elder can completely hijack this altar next year for his own purposes, whatever they may be,” said Rob Stutzman, a GOP political strategist in California. If he runs again, Stutzman said, “it will further delay a serious attempt at a comeback for California Republicans.”

Other Republicans fear Elder could hamper voter outreach to women, Asian Americans and Latinos. The radio personality’s 30 years of controversial remarks provided Newsom with perfect fodder to tie the party to Trump.

Moderate Republicans believe they have a good shot next year at unseating Newsom-appointed Attorney General Rob Bonta, either with Sacramento prosecutor Anne Marie Schubert, an independent, or with Los Angeles Republican Nathan Hochman. And Lanhee Chen, a moderate and respected GOP policy expert who’s worked for both Democratic and GOP presidents, is seen as the party’s best shot at a statewide office as he runs for state controller. But if Elder defines the California Republican agenda, he could hurt the party’s downticket chances.

Democrats: This recall process shall not stand

Now that Newsom has rallied California Democrats to rebuke the recall, they’re moving swiftly to their next project:

Even before voters decided to keep Newsom, Democratic lawmakers were clamoring to change California’s recall process. Their grievances: It takes too few signatures to qualify a recall. There’s no requirement that a recall target broke the law or acted unethically. And most pressingly, California’s two-question process means a governor can be replaced by a successor who gets far fewer votes than those cast to keep the incumbent.

“I believe Californians want accountability from their leaders, which the recall process provides,” state Sen. Steve Glazer, chair of the state Senate’s elections committee, said Wednesday as he vowed hearings to examine changes. “But they don’t want this partisan manipulation where a small minority can force an election and have a candidate prevail with less than a majority vote. That is anti-democratic.”

Voters would need to approve changes. But Democrats in the Legislature have the two-thirds margins they’d need to move proposed changes to the ballot. Polling suggests voters want to keep a recall mechanism but support various changes to the process. And they’ve told pollsters they saw the Newsom recall as a costly waste. The governor has hammered a similar argument. His landslide win could fuel interest in making changes.

Newsom looks all but certain to retain the governor’s office in 2022.

The White House is another matter.

The governor’s presidential ambitions have long been evident. Soon after voters decisively rejected the recall, pundits began musing that Republicans had elevated Newsom’s national prospects by setting up a career-affirming victory.

But the recall wasn’t the tallest impediment in Newsom’s path to the presidency. That would be the ascension of Vice President Kamala Harris, who shares with Newsom both San Francisco political roots and a campaign team. Harris, not Newsom, is the Democrats’ heir apparent.

There’s a scenario in which Harris runs and loses in 2024 and Newsom takes his shot in 2028. But that would be two years after he’d be termed out of the governor’s office, assuming he wins re-election next year. Last night’s results make that second gubernatorial term more likely, but they don’t mean Newsom is about to appear on presidential ballots.

If there’s one place in California that political professionals nationally were watching on Tuesday, it was Orange County, the one-time bastion of conservatism that has morphed in recent years into a stand-in for closely contested suburban House races everywhere.

For Democrats, the results were good. The recall was failing in Orange County, with ballots still being counted, by more than 5 percentage points, after Newsom beat Republican John Cox there by less than 1 percentage point in 2018. In an otherwise bleak midterm election map, the county offered Democrats a ray of hope.

“Just look at Orange County,” Rep. Sean Maloney (D-N.Y.), chair of the Democratic Congressional Campaign Committee, told reporters Wednesday morning. “There are four seats in Orange County that we’re going to win, and last night I think you saw the people of Orange County and the people of California more broadly reject the Republican brand that is centered around insurrection and denying the pandemic and fighting us every step of the way on the policies that will stop it.”

That’s an optimistic take ahead of a midterm in which Democrats are facing strong headwinds. In congressional races that included parts of Orange County last year, Republicans flipped two Democratic-held seats, despite Joe Biden pummeling Trump by 9 percentage points. In House races that may be critical to the control of Congress next year, Republicans are far from adrift.

Still, Tuesday belonged to the Democrats, who spent the following day piling on.

“You couldn’t have had a better mouthpiece for the Trump brand than Larry Elder in that election, and he got his ass kicked,” Maloney said. “And I think that ought to send a chill down the spine of [House Minority Leader] Kevin McCarthy, who thinks he can do this toxic Trump stuff without the Trump turnout that papered over how bad that message is for voters in swing districts.”

This was an election that began and ended with the coronavirus — and along the way, Democrats learned to embrace rather than run away from restrictions.

The recall took off after Newsom shut the state down for a second time in late 2020. People were confined at home, schools were closed and businesses were faltering when Newsom was caught dining maskless at a decadent restaurant for a lobbyist friend’s birthday. Around the same time, a judge gave recall proponents four more months to collect signatures because the pandemic had impeded their efforts.

Newsom could’ve ignored all things coronavirus for the recall homestretch, not wanting to remind voters of the state’s dark winter. But the Delta variant ultimately made the topic unavoidable. In the weeks before the election, Newsom mandated vaccines or negative tests for state employees, teachers and health care workers.

And Newsom decided to make those dictates a campaign centerpiece, using them to contrast California’s relative success in tamping down infections and deaths with more perilous situations in Texas and Florida. He warned voters over and over that a Republican governor — and Elder in particular — would push California off the “Covid cliff.”

Look for Democrats to make the same contrast elsewhere in 2022, tying lax Covid-19 rules to Trump and high rates of infections in red states.

President Joe Biden tested that theme Monday at a Long Beach rally for Newsom, where he said voting against the recall was “protecting California from Trump Republicans trying to block us from beating this pandemic.” Biden punctuated the point after Newsom won in a statement: “This vote is a resounding win for the approach that he and I share to beating the pandemic: strong vaccine requirements, strong steps to reopen schools safely, and strong plans to distribute real medicines — not fake treatments — to help those who get sick.”

Carla Marinucci and Kevin Yamamura contributed to this report.