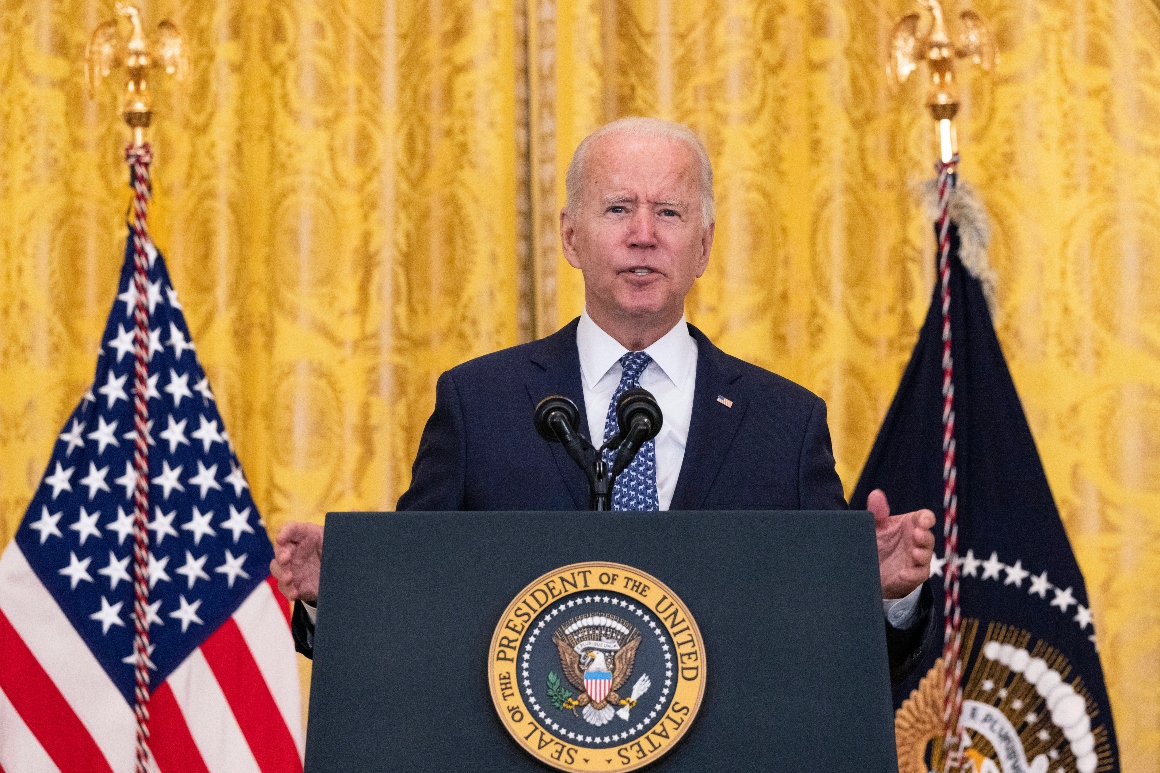 The resurgence of Covid-19 is rapidly dominating Joe Biden’s administration, putting into question the future of his broader legislative agenda and increasingly steering Democrats into treacherous political territory.

The president on Thursday is expected to lay out a detailed, six-point plan that’s aimed at staunching a loss in public confidence as the Delta variant sends hospitalizations, deaths and infection rates soaring. Democrats, anxious about the state of the presidency and the country, say Biden must use the moment to forcefully outline how he intends to combat this worsening stage of the pandemic.

“Fundamentally, for our public health, for our economic health and for the president’s political health, getting Covid right is the single most important issue that they face in the immediate term,” said Robert Gibbs, who served as a White House press secretary in the Obama administration. “We’re stepping into a different phase and the new administration has to meet the moment of that new phase. I think that begins in earnest with this speech.”

The speech comes just months after the president held a celebratory tentative return to normalcy, by first lifting mask mandates then holding a 4th of July barbeque on White House grounds.

On Thursday, Biden’s remarks will be delivered against the backdrop of falling approval numbers, driven in part by his handling of the pandemic. A Gallup poll this week found that for the first time — either as a candidate or as president — more people disapproved of Biden’s communication on Covid than approved of it. It’s a reversal from early in his presidency, when Biden’s handling of Covid overall helped buoy his standing. The president had stayed above water until a few weeks ago. Today, roughly 44 percent of the public approves of the job he is doing, according to a FiveThirtyEight average of polls.

Inside the White House, there’s frustration at suggestions that the president and his team have taken their eye off the pandemic. Instead, aides argue that it was the media that shifted focus to other issues, including the drawdown of U.S. military forces from Afghanistan. As evidence, the White House official pointed to a successful push to ramp up sagging vaccination rates over the summer and the dispatching of more than 700 surge teams to assist with states battling spiking infection rates. Biden himself has called the new surge in cases a pandemic of the unvaccinated — with those who’ve refused the vaccine still making up the vast majority of deaths and hospitalizations.

But despite spending the summer emphasizing vaccinations, rates of infection remain stubbornly high and hospitals in hard-hit areas are again running out of space in their intensive care units. Health officials have complained about confusion over the need and the timing of booster shots. And parents fear school closures now that kids (many unvaccinated) are cramming back into classrooms.

An inability to keep Covid cases from mushrooming over the fall could threaten to crowd out Biden’s massive economic agenda, forcing the president to devote more time and attention and political capital to the pandemic rather than directing energies toward shepherding a lofty infrastructure package and a $3.5 trillion social spending bill through Congress. But some Democrats say the best way for the president to negotiate with lawmakers on those initiatives is to demonstrate progress on the pandemic.

“One of the most helpful things the president can do to sell Congress on his plan is to launch a big campaign to defeat Covid, see progress against the virus and get his numbers moving in a positive direction again,” said Simon Rosenberg, a longtime Democratic operative. Making sure Covid is contained, Rosenberg said, would “increase his authority in the end game negotiations.”

If the massive spending bills do pass and the pandemic fails to relent next year, the White House would be hard-pressed to go back to Congress and ask for another round of Covid bailout funds, having secured a $1.9 trillion pandemic relief bill earlier this year.

Michigan Democratic Party Chair Lavora Barnes said Biden would be wise to use his Thursday remarks to address how he will protect children who cannot be vaccinated and offer more clarity on booster shots — the top concerns she’s hearing as she talks to voters door to door.

“Let’s talk about how we deal with this Delta variant, and whether or not folks need booster shots,” Barnes said. “All of that information needs to be coming forward, not just once or twice. I think President Biden talks about it every day, we all need to be talking about it.”

Biden does not lack for complicated issues on his docket. A chaotic and bloody withdrawal from Afghanistan dominated his August. Voters have persistent reservations about the state of the economy and more than 60 percent of those polled think the country is on the wrong track under Biden. But voters’ feelings about all of those issues, Democratic party leaders say, are tied to Covid. And it’s reflected in the polls: His approval numbers began to slide as Delta took hold across the country.

“It impacts absolutely everything,” says Felesia Martin, vice chair of the Wisconsin Democratic Party. “I don’t know how we can separate our economy or anything else from Covid because it affects every intersection of our life.”

Martin went on to say, however, that it’s unfair to place the blame on the Biden administration for the virus’ resilience. She argued that the president and his team have followed the science as they promised, but people are still refusing to get vaccinated and protesting mask wearing.

Martin, like the White House, placed the blame for the rapid spread of the Delta variant on those who refused to get vaccinated.

Democrats in some state races still believe Covid could prove a winning issue, painting their Republican challengers as dangerous because of their opposition to vaccinations and mask mandates — which polling shows a majority of Americans favor. Former Virginia Gov. Terry McAuliffe has been pummeling Republican Glenn Younkin on Covid in that state’s gubernatorial race. And in New Jersey, Gov. Phil Murphy is using the issue as a cudgel against his Republican challenger, Jack Ciattarelli.

Republican politicians who have taken a hard line against Covid restrictions, including Govs. Ron DeSantis of Florida and Greg Abbott of Texas, have seen their approval ratings fall in recent weeks.

The calculation by Democrats is that even if the virus eases by next year and concerns fade, the issue will remain on voters’ minds and could be a potent tool to yoke down-ticket Republicans in competitive districts to former President Donald Trump, whose handling of the pandemic proved disastrous for him in last year’s election. Matt Bennett of the center-left group Third Way called coronavirus “the way into the discussion about Trump and Trump-ism.”

“What you’re seeing with vaccine resistance, the mask debate and now anger and violence directed at schools is going to be poisonous for Republicans in places like the suburbs,” Bennett said. “It’s going to be a powerful way to connect Republicans who are on the ballot in 2022 with the things [voters] don’t like about Trump’s Covid response.”

But resting a midterm campaign on the pandemic is not without risk for Biden and Democrats — especially if the coronavirus is still raging next year. Regardless of whose policies are responsible for the lingering pandemic, midterm elections are traditionally closely correlated with a president’s approval rating, which Republicans will spend months working to drag down.

“They campaigned on fixing everything, and what have they done?” said John Thomas, a Republican strategist who works on House campaigns across the country. “Biden said he was going to solve Covid, and arguably it’s worse in some parts of the country.”

For Biden and the Democrats, he said, “Blaming others only gets you so far when you’re in power.”