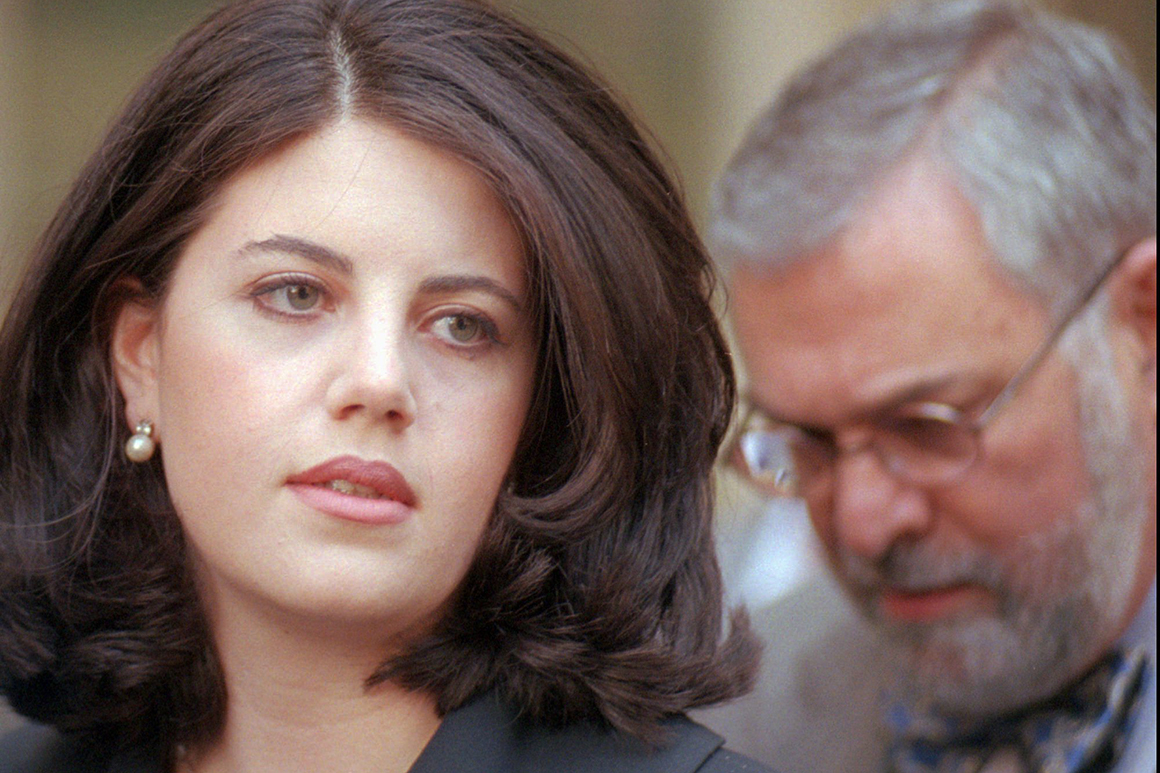 The chief sign of whether you’re a winner or a loser — a victim or a victor — is whether you get to write your own history. By those terms, in the 1990s, Monica Lewinsky was a victim through and through. Her affair with President Bill Clinton, once exposed, made her a pawn to those who wanted to take Clinton down, a threat to those who wanted to keep him in power, a lurid fascination to the media, a joke that fed successive evenings of ugly entertainment. Everyone knew her name, and nearly everyone was implicated in her public shaming. The idea that she was human, with feelings and opinions, seldom made it into the narrative.

In 2021, Lewinsky is fully in charge of her story, thanks to a reputation rehab that began with a Vanity Fair essay in 2014 and worked its way to the pinnacle of modern-day storytelling: a 10-part, star-studded miniseries on prestige TV. “Impeachment: American Crime Story,” which premieres this week on FX, is a production of Ryan Murphy, the creator of “Glee” and “American Horror Story,” who also retold the O.J. Simpson trial for an audience with a fresh perspective. This new series recalibrates an old political scandal for modern sensibilities, starting with the fact that it has Lewinsky’s input and her blessing. (“All that matters to me is what she thinks,” Beanie Feldstein, the actress who plays Lewinsky, told the Hollywood Reporter.)

Revisiting the Clinton/Lewinsky scandal in the #MeToo era underscores how much has changed in our baseline view of sexual harassment, power dynamics and behavior that crosses the line. Over and over, characters pass off as meaningless — a nonstory, a non-crime — the kind of workplace behavior that just toppled New York Governor Andrew Cuomo in record time. (“Having sex with an office girl is not a high crime or misdemeanor!” a young conservative operative named George Conway shouts at one point.) The series reminds us how much casual sexism was marbled into the culture at the time, from the white men making lewd jokes in Hollywood writers’ rooms to the lawyers on Kenneth Starr’s independent counsel staff who try to flip Lewinsky as a witness, and call the effort “Operation Prom Night” — because, as one of them explains, all it should take is a “half hour with a girl in a hotel room.”

But if “Impeachment: American Crime Story” acknowledges #MeToo, it also complicates the narrative, and maybe even serves as a course correction. When the movement first emerged, there was a broad focus on punishing bad actors and weeding out the problematic people — a hunt-and-purge drive that has extended into other areas of social justice. But in this telling, the world of the ‘90s isn’t a binary place, divided into innocent women and predatory men. It’s a complex web of motivations and major and minor players, in which women aren’t just complicit. They’re largely running the show.

Lewinsky never fit perfectly into the #MeToo template. Unlike the Clinton accusers who complained about unwanted advances — such as Paula Jones, whose sexual harassment lawsuit was the path to Lewinsky’s downfall — she always contended that their relationship was consensual. She wasn’t a pure, defenseless victim. She was a person with agency, capable of her own bad choices. In the series, she talks about Clinton moonily, clinging to the trinkets that the married president has given her, waiting desperately for his late-night phone calls. She doesn’t want a payoff, settlement a reckoning or a public apology in the series. She wants him.

That’s not to exonerate Clinton himself — for spectacularly bad judgment, and for taking part in a power dynamic that was grossly uneven and fundamentally cruel. The series doesn’t let him off the hook, even if it suggests that he had genuine affection for Lewinsky; nearly every word he utters, to her and every other person, is a whispery lie designed to save his own hide. But when it comes to making Lewinsky suffer in the ways that truly upended her life, the true guilt belongs to the women.

There’s Ann Coulter, played by Cobie Smulders as the hard-drinking leader of a salon of right-wing conspirators, looking for every angle to take Bill Clinton down. (“This is a coup d’etat, and we are the coup,” she purrs to her compatriots at one point, holding a bottle of wine.) There’s Betty Currie, the president’s personal secretary, whose kindness to Lewinsky masks the fact that her loyalties are firmly on Clinton’s side. There’s Susan Carpenter McMillan, an antiabortion activist who convinces Paula Jones to walk away from a hefty settlement offer and pursue a trial —creating the opening for Lewinsky’s downfall, and leading Jones directly to the slaughter. There’s Lucianne Goldberg, a literary agent grasping for dollar signs, who convinces a bureaucrat named Linda Tripp to tape her rambling phone calls with Lewinsky, providing the hard evidence that will take the scandal public.

And especially, there’s Tripp, the series’ true protagonist: the person who sets the action in motion and has to bear the consequences of what she’s wrought. In many ways, the entire series functions as a kind of supervillain origin story, a study of how an obscure government employee — disgusted by what she sees as the Clintons’ low-class behavior — works her way into the fulcrum of a national scandal. In this telling, Tripp befriends Lewinsky by chance, becomes her confidant, tapes their conversations for eventual exposure, and convinces herself that she’s still looking out for Lewinsky’s best interests. “She’s a kid. She needed someone to save her. Were it my own daughter, I’d have done the same thing,” she tells Jones’ lawyers. The series posits that her motivation is ultimately less political than psychological: A habitual wallflower finds herself suddenly central to the story, important for the first time in her life. It’s intoxicating.

How much of this version of Tripp’s story is true, we’ll never know; Tripp died of cancer in 2020, so she isn’t available to share her side. (Lewinsky, for her part, doesn’t seem to have forgiven; she references Tripp’s betrayal in a Proust Questionnaire in this month’s Vanity Fair.) It’s an irony that, even as the series tries to understand Tripp, it often paints her as a caricature: a cartoonishly dumpy middle-aged suburban divorcee, lonely and sad, binge-eating Utz potato chips and unwrapping microwave dinners. Still, it portrays her as a person in control of her destiny, painfully conscious of how her life is going to change, stoically accepting the pain when the culture uses her, mocks her and spits her out.

Indeed, Tripp gets a fairer shake from the series than Jones. While the script never doubts that Jones is telling the truth, it portrays her as a cartoon hayseed, incapable of understanding how she’s being manipulated, and unable to keep up with the sharks. Even as the series suggests that late-night TV was unconscionably cruel to Lewinsky and Tripp, it makes Jones the butt of the same kinds of jokes. This could stem from garden-variety coastal condescension, or the fact that Jones lost credibility with the Hollywood left when she eventually endorsed Donald Trump. But as Amanda Hess has written in The New York Times, the fact that Jones has never been taken fully seriously is a conspicuous blot on #MeToo, a proof point that stories of sexual misconduct aren’t always told completely, or heard universally.

Overall, Jones, like Lewinsky, comes across as a victim of the women around her, the actors who truly propel the scandal forward. When Starr seems about to give up on his inquiry and concede that he doesn’t have the goods to bring Clinton down, Coulter and Goldberg are scurrying around, finding creative ways to dredge up the worst dirt. While Jones’ lawyers seem satisfied with a financial settlement, McMillan can play the chess game and see a path to bring down a presidency. The women are frequently the smartest ones in the room, the most determined, the most competent. (When Hillary Clinton finally gets screen time, in the seventh episode, she immediately proves herself more skilled at PR than anyone on the White House staff.) And, by definition, they’re the cruelest, as a function of playing their roles so well. In a 2019 piece in The Atlantic, Caitlin Flanagan considered the ways that human resources departments have facilitated sexual harassment in the workplace, by creating a set of processes that ultimately protect the people in charge. Ultimately, that’s a more nuanced way to see #MeToo overall — it’s not simply a problem of men who need to be reformed, but of a system that selectively ignores some people’s humanity in the service of others’ needs.

That squares with the way the series handles Lewinsky herself, who reportedly gave her input on every scene. The scripts don’t spare her from critique or paint her as an in-the-moment heroine; she’s naïve, privileged, flighty and pathetically self-delusional. But she’s human. That seems to be the main message of Lewinsky’s current public incarnation, in which she’s cast herself as an antibullying advocate, a voice for people discarded by modern culture. Though she has written about how #MeToo has altered her perspective on her personal history, she seems less focused on a particular social justice cause than on the broader goal of forcing kindness on the culture, and pointing out the dynamics that enable the people who hold more power to mistreat the people who hold less of it.

The need to shift that power — by telling the right stories — seems the key to understanding why Lewinsky would want to take part in a series that publicizes, once again, the darkest moments of her life. When Lewinsky first reemerged from the shadows in 2014, I remember wondering whether she was wise to build a public identity around those old events, to pose for glamour shots and open herself, once again, to accusations that she’s frivolous and self-absorbed. But now I understand her calculation. The story was too big, too broad, too memorable; it would define her life no matter what. So what better way to assert her own power than to tell it herself, warts and all? To own it, and yes, to profit from it — because in the end, it’s complicated, and it’s hers.