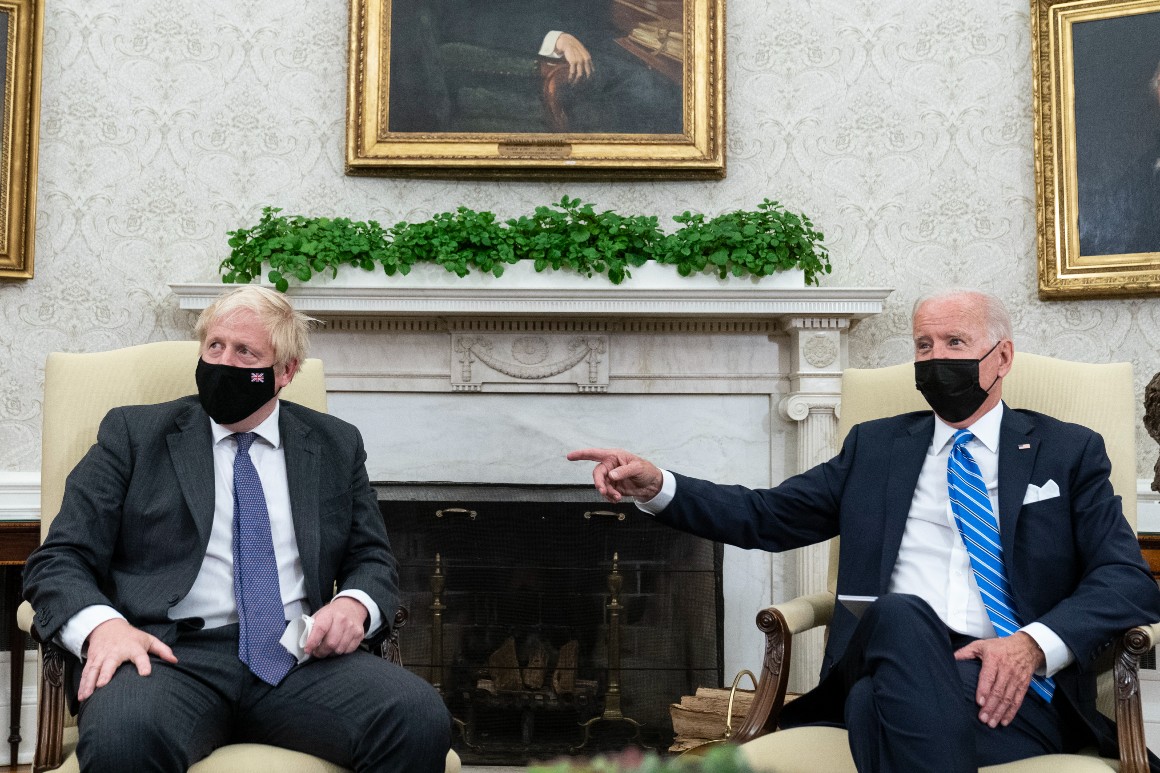 WASHINGTON — Joe Biden likes to play hard to get with Boris Johnson — but shows just enough love to keep the “special relationship” between the U.K. and U.S. alive.

The Biden White House hasn’t forgotten how Johnson cozied up to former President Donald Trump, who embraced Brexit. Nor can it ignore the British prime minister’s history of eye-opening comments about U.S. political figures linked to Biden. He once questioned whether former President Barack Obama’s part-Kenyan ancestry predisposed him to a “dislike of the British Empire” and compared former Secretary of State Hillary Clinton to “a sadistic nurse in a mental hospital.” 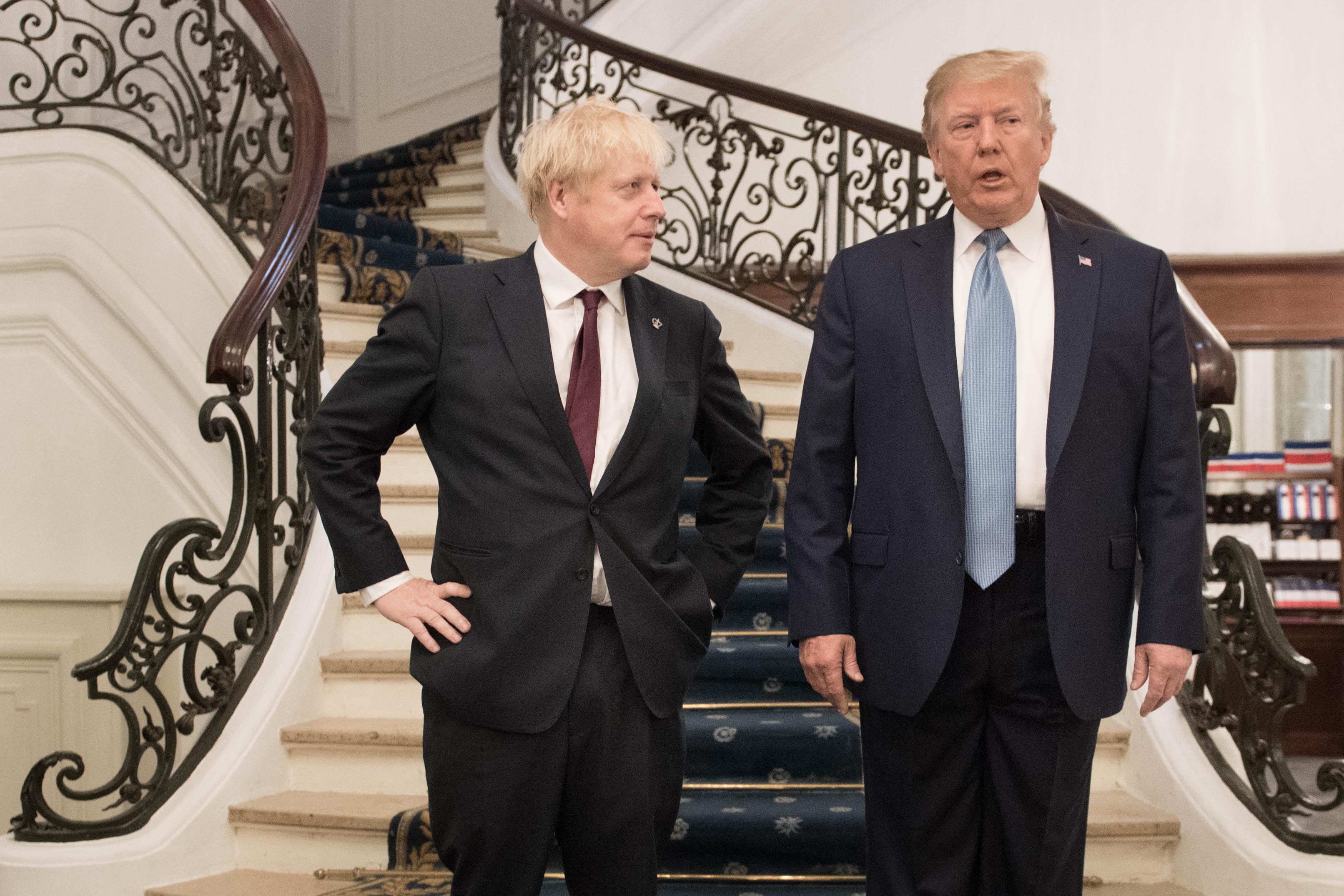 Since taking office, Biden has ignored Downing Street’s advice to change course on the Afghanistan withdrawal, and has been critical of his British counterpart over the Brexit impact on Northern Ireland.

But through it all Biden has thrown numerous bones to Johnson, inviting the U.K. into a select defense pact, offering a big helping hand ahead of a crucial British climate summit, and going the extra mile by inviting the prime minister to the White House.

“It’s hard not to get along with Boris Johnson. He is this larger-than-life personality who very much wants to be loved and appreciated,” said Heather Conley, a former George W. Bush administration State Department official now with the Center for Strategic and International Studies.

The aim, when the two leaders met in the Oval Office on Tuesday, was to show a united front and smooth the ups and downs of recent months, making clear that whatever their differences, the U.K. and U.S. need each other to tackle the global challenges facing the West.

“What is unusual about this moment is that both Biden and Johnson have much at stake in reframing their nations’ global reputations, and they appear to have recognized this mutual interest and are investing in it,” said Sophia Gaston, director of the British Foreign Policy Group. “Biden knows that targeted acts from America will carry outsized importance for the domestic reception of Johnson’s Global Britain agenda, and he is strategic about deploying these in a way that keeps Britain working hard to maintain the relationship.”

Both need each other to keep the COP26 environment summit show on the road, for instance; Johnson because as the host of the November event he has staked a good chunk of his political reputation on it, and Biden to show the U.S. as a leader on climate issues, in particular after the confused approach from Trump.

Biden handed Johnson a diplomatic win ahead of his White House visit, pledging to double the U.S. contribution to a climate finance fund to help developing countries improve their green credentials. Johnson wants the fund to reach £100 billion before the COP26 event, and said the U.S. contribution marked a “big day for the world.”

As the pair put on a united front in the Oval Office, Biden said he would be at the Glasgow summit “with bells on,” insisting he was “anxious to attend.”

The visit to the White House shows the lengths Biden is willing to go to keep his British friend sweet. Both men were in New York on Tuesday morning for the United Nations General Assembly. The pair could have met on the sidelines of the summit, but the White House apparently wanted to make sure Johnson could get some official pomp.

Westminster whispers suggested Downing Street was pushing for a White House moment, Johnson’s first since he became PM. But a Downing Street official insisted it was Biden who suggested it — although the proposal came late in the UNGA planning process.

Of course, part of the motivation could be practical; if Biden invites leaders to meet on the sidelines of the New York summit most of the nations in attendance will want to bend his ear. But the president did meet Australian Prime Minister Scott Morrison in Manhattan — despite Morrison also making a visit to Washington later the same day, suggesting a more generous approach to the Brits.

For his part, Johnson, released from domestic political pressures and many months of COVID restrictions, appeared to relish the opportunity. “It’s the first time we’ve been able to do a trip like this for ages and ages and I’m happy to have everybody here,” the PM gushed to the hacks on the plane, his jacket off and the sleeves of his white twill shirt rolled up to the elbows.

But theatrics aside, some significant tensions remain between the two countries. In an NBC interview recorded on Monday, Johnson admitted the NATO withdrawal from Afghanistan, which ended up leaving thousands of vulnerable people behind and at risk from the Taliban, “could have” been done differently.

At the time of the exit last month, Johnson tried to persuade Biden to extend his withdrawal deadline — but the president refused, even failing to take a call from him for more than 24 hours.

In anticipation of his audience with Biden, Johnson has changed his tune somewhat, praising U.S. “leadership” on the withdrawal during a meeting Tuesday afternoon with Vice President Kamala Harris.

Meanwhile, Biden has been pushing the U.K. to watch its step over the post-Brexit status of Northern Ireland, fearing the hard-fought peace in the region could be harmed. As Johnson prepared for his U.S. trip, senior Democrat Nancy Pelosi, herself on British soil for a visit, issued the latest warning to the prime minister.

When Biden and Johnson sat down together in the White House, the president told his counterpart he believed in the 1998 Northern Ireland peace agreement keeping open the internal border on the island “very strongly.”

“We spent an enormous amount of time and effort, the United States, it was a major bipartisan effort made,” Biden said. “And I would not at all like to see, nor I might add would many of my Republican colleagues like to see, a change in the Irish accords, the end result having a closed border in Ireland.”

The most long-standing sticking point is on a trade deal between the U.K. and U.S. — long hailed by Euroskeptics as the prize of Brexit. Talks went into the deep freeze after Biden took office, leaving the U.K. out in the cold, and there is no suggestion of an imminent relaunch.

Conley said Johnson could try to play up the achievement of the U.S.-U.K.-Australian defense pact in part to distract from the fact that there’s no post-Brexit trade deal between London and Washington.

Even Johnson appeared to admit that the 2016 warning from former U.S. President Barack Obama — that Britain outside the EU would be at the “back of the queue” for a deal — had come to pass. He told journalists on the plane to New York, in response to a question from POLITICO, that Biden had “a lot of fish to fry” on the domestic front and had put trade talks on the backburner.

Asked during the White House meeting whether the U.K. was indeed at the back of the queue for a U.S. trade deal, Biden dashed any hopes Johnson might have had. “We’ll have to work that through,” he said.

One senior government figure said Britain could consider joining the North American Free Trade Agreement between the U.S., Canada and Mexico as a route to a U.S. deal, or for both London and Washington to negotiate into the 11-nation Comprehensive and Progressive Agreement for Trans-Pacific Partnership.

“There are a variety of different ways to do this. The question is whether the U.S. administration is ready,” the government figure said — showing the Brits are still eager to get a deal in the bag but have been coming up against a brick wall. “The ball is in the U.S.’s court. It takes two to tango.”

One U.K. official complained that the U.S. deal had become a distraction, and that putting it on a pedestal had set post-Brexit expectations too high.

But Peter Rough, an analyst with the right-leaning Hudson Institute, said that in some ways Johnson — and Britain as a whole — appeared liberated as they operated outside the EU framework.

The trilateral deal with Australia and the U.S. was an example of Johnson’s freedom to operate, said Rough, who added that the arrangement was a sign that post-Brexit Britain wasn’t going to kowtow to China as some had predicted.

Ahead of the meeting, a Downing Street spokesperson said the PM would praise “the fantastic state of U.K.-U.S. relations.” Johnson, as his usual optimistic self, was even more effusive, telling reporters “our relations with the U.S. are about as good as they have been at any time in decades.”

He added he had bonded with Biden over trains, quipping: “He’s a bit of a train nut, as am I.”

But Johnson was unsure whether the two shared the same brand of toothpaste — a bonding point between their predecessors George W. Bush and Tony Blair.

“I don’t know about toothpaste,” he said. “I’ll pledge that if I discover anything about the toothpaste I’ll let you know.”

On that — as on many of the issues that really count — Biden likes to keep Johnson guessing.