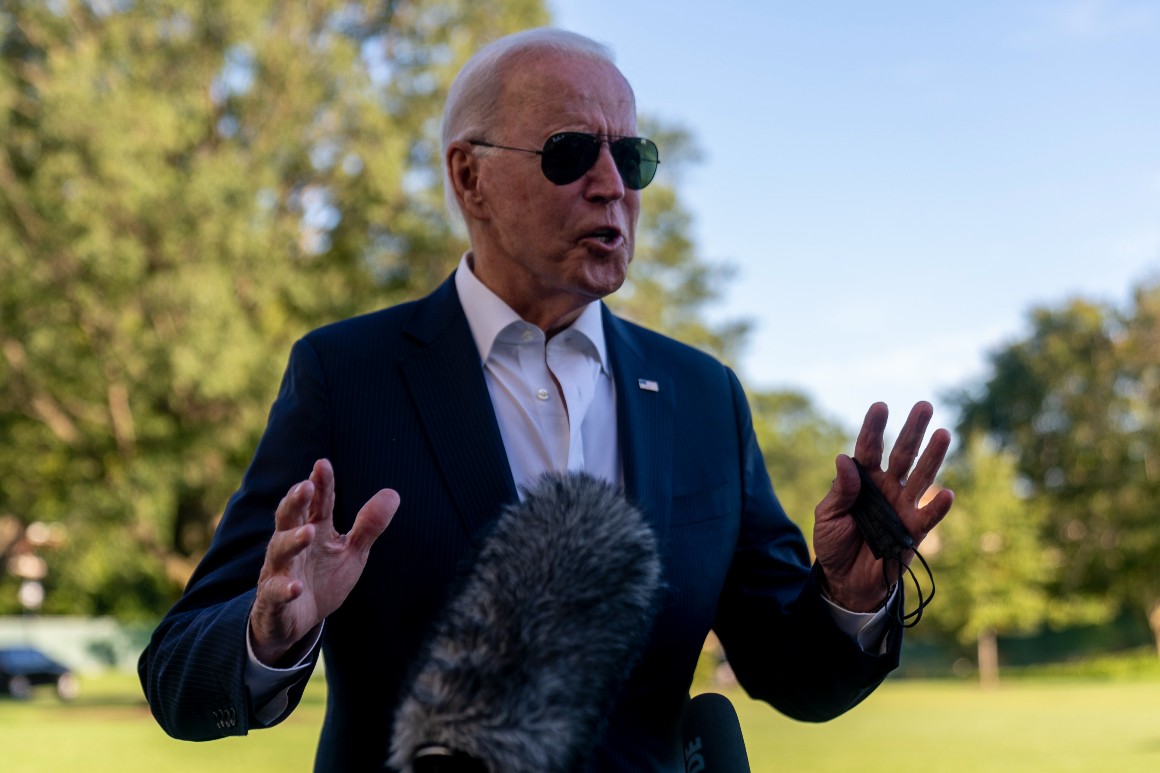 Though he is beset by turmoil overseas, confronting chaos at the border and struggling to contain a deadly pandemic back home, the president’s main challenge this week comes from his own party.

With his economic and domestic policy agenda on the line, President Joe Biden needs a big win from his fellow Democrats, whose early unity around his presidency has been strained in recent months. Biden’s now trying to win it back. From Camp David, he worked the phones with lawmakers over the weekend, urging them to support the multitrillion spending package party leaders are looking to pass this month. Senior adviser Steve Ricchetti, Biden top economic adviser Brian Deese, another economic adviser, David Kamin and the White House’s legislative affairs team led by Louisa Terrell lobbied lawmakers too, visiting the Hill, calling members and holding Zoom sessions with them.

Allies are spending another $4 million in ads starting this week urging unity around two massive spending plans, according to numbers made available to POLITICO by Climate Power & the League of Conservation Voters. And Build Back Together, an outside group closely aligned with the White House, is pushing out messaging to local media outlets, which it views as the most trusted news, asking Democrats to convey that Biden’s economic plans are “popular, popular, popular,” according to the group’s talking points, the toplines of which stress middle class tax cuts, jobs and making the wealthiest Americans and corporations pay more.

Collectively, it is a throw-everything-at-the-wall attempt to push through a $3.5 trillion Democrat-only social and climate spending plan along with a bipartisan infrastructure package with a $550 billion price tag. And it illustrates the sense of desperation that has taken over the party as those agenda items seem painfully close to failing in Congress.

The impact on Democrats if they come up short: “Disastrous,” said John Podesta, a veteran Democrat and former counselor to Barack Obama.

“You need all three of those things” to have any hope of keeping their majorities in the 2022 midterms, Podesta said, referring to the American Rescue Plan, a $1.9 trillion Covid relief package that passed in the spring, as well as the two pending plans. “If you pull out the fact that when Democrats were in control they couldn’t do anything for you, then drawing attention to how wacky the Republicans have become doesn’t mean a lot.”

Inside the White House, the tension heading into this week is palpable, aides and allies said.

The president’s approval numbers have been stuck in the mid-40s for weeks. Each attempt at recalibration on its pandemic response — the main force driving down his numbers — has been overshadowed by other world events, from the U.S. troop withdrawal from Afghanistan to the troubling scenes of Haitian migrants gathering at the southern border.

Hungry for progress on the domestic front, the White House is now in a compromising state of mind. The president has made it clear he is willing to accept less than the $3.5 trillion that has been the sticker price for his Build Back Better plan, even as his aides publicly say that the cost will ultimately be nothing since it will all be paid for.

Inside the White House, the goal increasingly is to simply get the package over the goal line.

“They need a win,” said Amanda Loveday, senior adviser with Unite the Country, a pro-Biden super PAC, pointing to Afghanistan, the economy and turmoil at the U.S. border on top of the pandemic. “They’re all connected. If you’re able to get more Americans vaccinated, you’re able to see the economy continue to grow. All of it is an intersecting web, the nucleus is a better America for the people of this country.”

Where the White House finds optimism is in the experience of its staff. A person familiar with the White House’s thinking noted that those in charge of ultimately cutting the deals, like Ricchetti, have been in tough legislative battles in past administrations and even earlier this year.

But few legislative vehicles are as complicated to pass as the current package, which relies on progressives and moderates in the party to find commonality on massive domestic spending and taxation policy while trusting each other’s motivations. Democratic allies of the White House said this past week that they feared the president’s team had been caught off guard by the stalemate between the two sides of the party and was playing a massive game of catch up with House votes slated on both the infrastructure component and reconciliation bill this week.

In anticipation of those votes, new ads funded by Climate Power and the League of Conservation Voters — two of the most aggressive champions of the climate components of the reconciliation bill — will go live on TV and digitally this week. The new spending is in addition to $9 million in ads the groups have already been aired in key districts. Rep. Kathleen Rice’s (D-N.Y.) New York district and Rep. Stephanie Murphy’s (D-Fla.) Florida district are among those targeted with ads underscoring the need to tackle climate change.

Last week, Podesta sent a memo to every Democratic congressional office warning the party could lose its majority if lawmakers didn’t coalesce around a bigger spending package. He also pushed for the need to act on the climate while underscoring the political realities that would keep various Democratic factions from getting what they wanted. It was a major turn for Podesta, who earlier this year had urged the White House to not hold out for Republicans on an infrastructure package.

Jesse Ferguson, a Democratic strategist who regularly helps run focus groups that look at issues facing the White House, downplayed Biden’s dropping polling numbers as a typical consequence of the realities of governing.

“Anyone who has thought that initial polling numbers at the start of the administration would hold for four years doesn’t understand the partisan climate in which we live,” he said.

But Biden’s numbers — with a Gallup poll last week putting him at just 43 percent approval — remain a concern both in the White House and among Democrats facing tough midterms next year. Donald Trump’s Gallup approval was in the upper 30s at this time in 2017 and Republicans took a pummeling in the midterms the following year.

Still, Ferguson said in the samplings he’s seen, Americans are pointing more and more to “a faction of the minority” they blame for holding back the country’s progress on Covid. “The biggest imperative going forward,” he said, “is to now show he is successfully solving these problems and at the same time when they can’t be solved, making clear who’s to blame.”