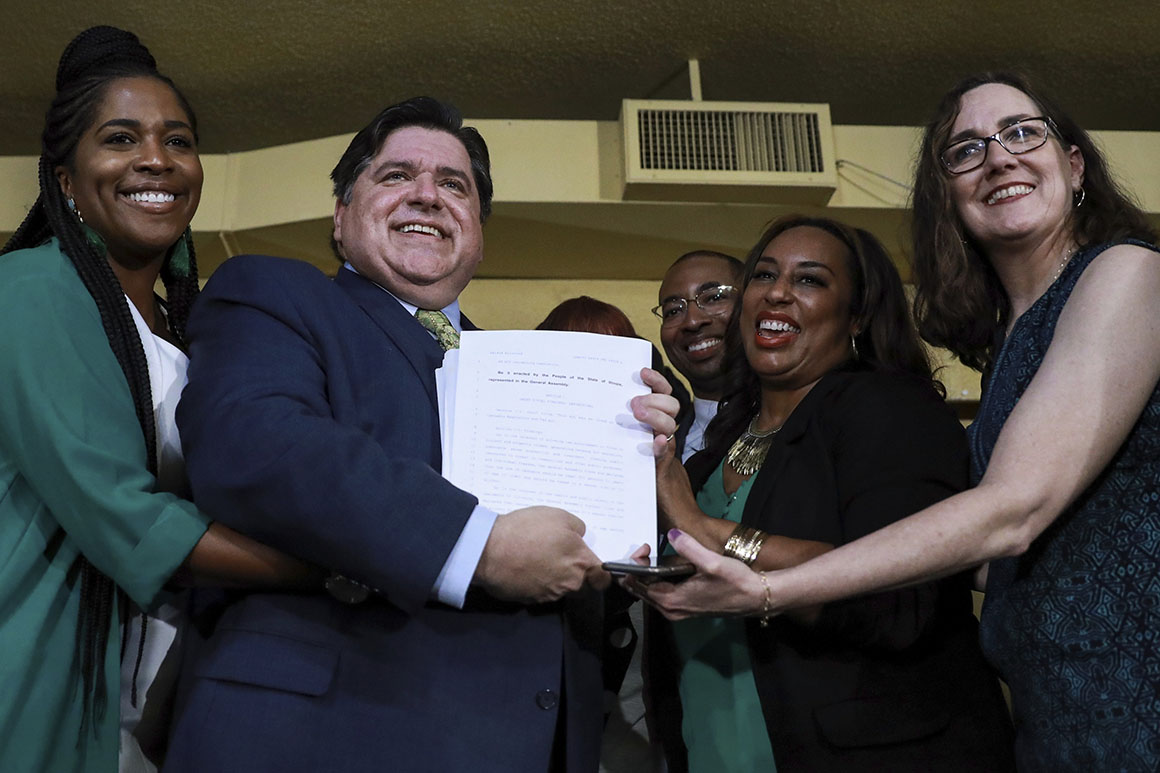 CHICAGO — Illinois stood to become a model for diversifying the marijuana industry in other states when it legalized the drug last year. So far, its success is half-baked.

As the first state Legislature to legalize recreational cannabis sales after others approved it by ballot measure, Illinois crafted what it hopes will be a national template for how to atone for the war on drugs while also generating new revenue.

It’s on pace to pull in $1.3 billion in weed sales this year, roughly double what it got in 2020, and thousands of marijuana-related criminal convictions have been wiped clean. But Illinois’ effort to diversify the lucrative industry away from established white-owned businesses has stumbled several times over the past two years. It’s created a sore spot for the state that’s attracted a steady barrage of lawsuits over the lottery system built to seed scores of new small businesses owned by minorities, women and veterans.

“Yes, there have been challenges because we just put the jackhammer in the ground for the first time. And that’s loud and noisy and hard,” Toi Hutchinson, Democratic Gov. J.B. Pritzker’s senior cannabis adviser, said in an interview. “You have to go through it until you get to what building a new economy and a new industry is going to eventually look like. I never thought this was going to be a walk in the park.”

Illinois is taking a methodical approach to handing out licenses to avoid the fate of most other state markets that have few minority-owned businesses. But there’s another twist: Some marijuana dispensary winners in Illinois are already looking to sell their licenses — or a stake in them — to larger companies.

Black people are nearly four times more likely than white people to be arrested for marijuana-related crimes nationwide, even though they have similar rates of usage. States and cities across the country have tried to ensure that communities disproportionately hurt by criminal penalties on marijuana are able to reap the financial benefits of legalization. But so far those efforts have largely failed, and the rapidly growing industry — sales topped $20 billion last year — continues to be dominated by white-owned companies. Watching how Illinois resolves these licensing concerns over the coming months will likely guide lawmakers and cannabis advocates designing similar programs elsewhere.

Legal battles are expected, said Hutchinson, who was one of the legislative architects of the cannabis law when she served in the state Senate. And Illinois, she added, is just as much focused on righting the wrongs of the war on drugs as it is in building a multibillion-dollar industry in the state. So far, Illinois has expunged hundreds of thousands of marijuana-related arrest records and pardoned more than 20,000 people with nonviolent criminal convictions for drug use as part of the social equity element of the law.

“We started with the premise that you cannot normalize and legalize an activity for whom prohibition of the same activity destroyed whole communities,” Hutchinson said.

How Illinois got here

Cannabis entrepreneurs are disheartened that nearly two years after recreational marijuana was legalized in January 2020, they have yet to secure licenses. Meanwhile, established — mostly white-owned — medical cannabis companies were allowed to expand their foothold as new entrants lingered in a novel process.

The delays came about in part because of Covid-19 but also due to stumbles in the scoring process for early lotteries, which in turn prompted lawsuits. The state put everything on hold until legislators could tweak the law earlier this year and allow the process to move forward in a way they hope will lead to greater minority representation.

Illinois’ latest legal fumble emerged a few weeks ago after applicants from earlier lotteries for dispensary licenses say they were wrongly left out of the process because of a clerical error. As a result, the state has put the distribution of all licenses on hold.

“It’s very frustrating. We can’t move ahead until the state works it all out,” said Rickey Hendon, a former state senator and co-owner of a winning dispensary license.

So far, 185 conditional dispensary licenses have tentatively been awarded. In all, Illinois plans to hand out 500 licenses through a lottery process that is designed to benefit applicants who are from minority communities, women and veterans.

In addition to licenses for dispensaries, the Pritzker administration has allocated 79 craft grow, infuser, and transporter licenses through the state Department of Agriculture. Among those license winners, 83 percent qualified as social equity applicants and 67 percent identified as non-white, according to Hutchinson’s office.

Charlie Bachtell, CEO of Chicago-based Cresco Labs and chair of the National Cannabis Roundtable that advocates for legalization, chalks up the delays and stumbles to “growing pains” of a new industry.

“When you’re doing it for the first time, you’ll make errors and mistakes,” he said. “We saw it in states that started with medical cannabis. They’re lessons learned for future states that try to address social equity.”

Cresco has a lot at stake with 10 dispensaries open in Illinois. And while Bachtell acknowledges Illinois’ licensing delay in distributing licenses is having “a tempering effect on growth,” he said he’s taking the long view on what it means for the state’s cannabis economy.

“There’s a bigger benefit to the industry by Illinois successfully doing it then my need for more doors to be open tomorrow,” he said. “I hope it’s as expeditious as they can make it, but I’m a realist and know it will take some time.”

At least some lottery winners understand why the process is slow, though that doesn’t make the wait for a dispensary license any easier — or cheaper.

“I’m more comfortable with where the process is going,” said Akele Parnell, who is a tentative winner of dispensary and craft grow licenses. “But the longer we wait to fight over legal issues, the longer we wait for diversity in the industry.”

Parnell is an African American attorney who previously worked at cannabis company Green Thumb Industries before he set out on his own. His challenge now is lining up financing, scouting a location and looking for employees while the legal battles wrap up so licenses can officially go out. One case could be resolved next week, but there are still half a dozen others in the courts.

The Illinois Department of Financial and Professional Regulation is ready to issue conditional licenses now but is waiting for the courts to give the green light, according to Hutchinson’s office.

Not everyone has been able to wait. Some tentative license winners are already looking to sell majority stakes of their cannabis companies to bigger organizations, putting into question whether the industry will ever be as diverse as Illinois wants it to be.

Hendon is among those looking for investors. “It’s been a two-year delay. People have rent and mortgages to pay and you still have to raise capital to get [a dispensary] off the ground. This isn’t about people being hell-bent on making money.”

It’s capitalism, said Hutchinson, the Pritzker adviser, pointing to how deals are done in the business world.

“A whole lot of Black and brown people weren’t on golf courses trying to figure out how to get into the cannabis industry,” she said. “Now, you have a bunch of entrepreneurs who are in those spaces and they have every right to navigate it the way they see fit.”