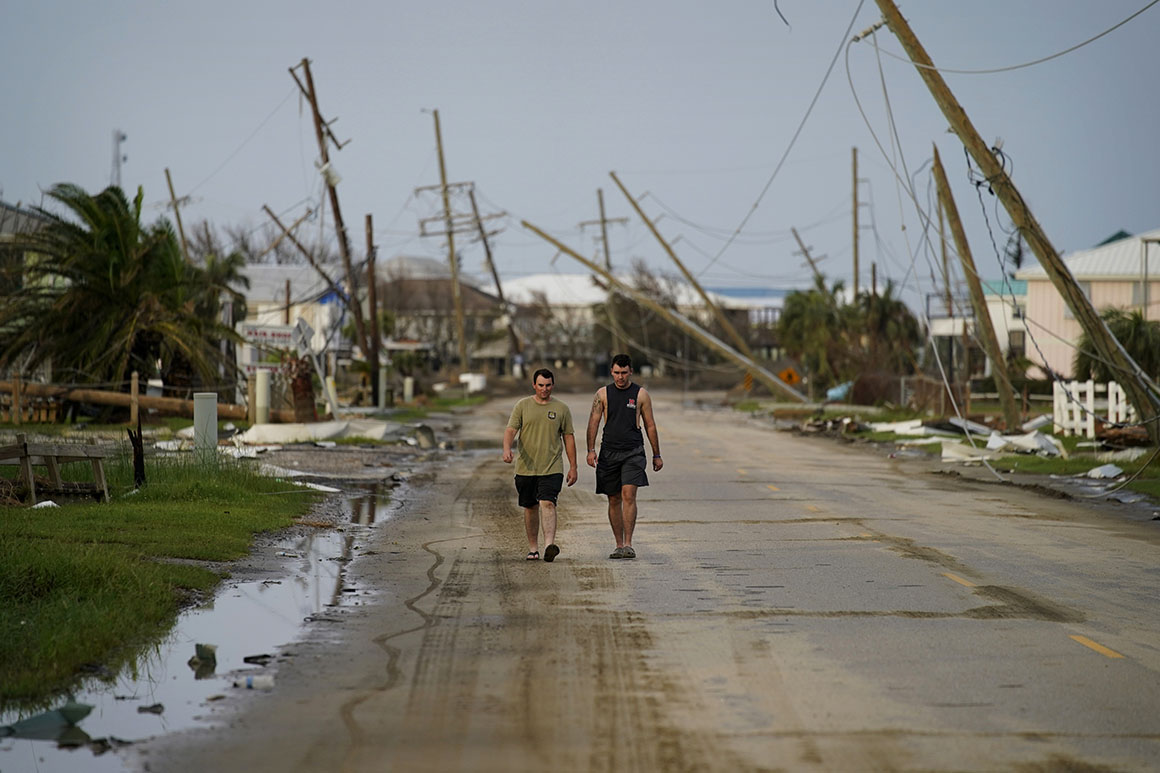 Only a third of Nicholls State University students were vaccinated against the coronavirus when they returned to campus last month, so the Louisiana school embarked on a campaign to press inoculations — and it seemed to be working. Hundreds of reluctant students got jabs in the first few days of the semester.

The Category 4 storm not only threatened lives and left a million or so homes and businesses across Louisiana without power. It also battered 21 state colleges and universities, stalling campus vaccination efforts in a state with one of the lowest vaccination rates in the country.

After months of strategizing how to ease students back to campus as the highly contagious Delta variant surged, college administrators shifted their priorities overnight as Ida scattered everyone. Now they’re busy making sure students have food, water and shelter, and wondering how to counsel many of them through this semester.

“Until recently, all we talked about was Covid. Now all we talk about is the hurricane,” Nicholls President Jay Clune said in an interview.

President Joe Biden approved a major disaster declaration for Louisiana the day Ida struck, authorizing individual and public assistance for hard-hit parishes. He also deployed FEMA teams to distribute grants for temporary housing, emergency home repairs and medical expenses linked to the hurricane. Ida made landfall three weeks ago but it wasn’t until Monday that Nicholls was able to resume online classes.

“The human toll of this disaster is still unknown,” Kim Hunter Reed, Louisiana’s commissioner of higher education, said in an interview. “Students may feel a tug to stay home and help their parents recover rather than come back to campus to finish their degrees. It could be a significant challenge.”

Nicholls, the University of New Orleans and Southeastern Louisiana University sustained some of the worst damage among the state’s colleges and universities as the storm marched north from the Gulf Coast. All three completely lost power and were forced to cancel classes for weeks whereas Louisiana State University, the state’s flagship, was able to resume normal campus operations more quickly.

Together, the three hard-hit schools serve about 30,000 students, but most of them are commuters. Fewer than one in five live on campus. So their recovery efforts have focused as much on repairing damaged roofs and clearing debris as they have on mapping out how to resume classes when thousands of students live in communities that were ravaged by the storm.

When Nicholls surveyed students about their needs, only half of them responded. The ones who didn’t may not have had power, internet access or cell service when the survey landed in their inboxes. Two-thirds of the students who did reply said their homes had sustained damage, and one quarter said they didn’t have enough food to eat.

School officials worry about how widely Covid-19 may have spread in the storm’s aftermath, when students and their families sheltered together indoors, often unmasked, wherever they could find space, and the extent won’t be known until regular testing resumes in the days ahead.

“Students I’ve talked to are hungry, they’re worried about getting gas, they’re trying to take care of their parents and some have children of their own,” said Tyler Legnon, an MBA student who serves as Nicholls’ student body president. “They can’t think about fighting back against the virus until they’re okay.”

Legnon’s own home in Gibson lost roof shingles and chunks of siding when Ida tore through town, and a family home his great grandfather built in Houma was destroyed, but he still wants to finish the semester. Nicholls eliminated fall break, made the three days before Thanksgiving school days and pushed winter commencement back by one week in hopes of ending courses roughly on time.

Reed, the state’s top higher education official, said keeping students on track to graduate is critical because the credentials they’re seeking should help protect them the next time a storm strikes and they’re faced with insurance challenges or a loss of income. “When you have a credential of value, you have stability and resiliency,” she said, adding that she expects to begin discussions about federal funding for student recovery in the weeks ahead.

Rep. Garret Graves (R-La.), who represents some of the areas hardest hit by Ida, said he also wants to keep students on track and has been in the region advocating for swift restoration of power and internet — two services vital for the successful resumption of classes. But nearly 22,000 energy customers still cannot turn their lights on, and internet outages remain widespread three weeks after the storm.

“We’ve been through smaller storms before, and we pick back up and get rolling pretty quickly,” Graves told POLITICO. “This time is different. It could be months before some areas experience any degree of normalcy.”

Part of the problem is the sheer volume of utility poles that toppled under the force of Ida’s winds. Graves said the state brought in 25,000 linemen to repair and replace all the damaged poles and power lines. University of New Orleans President John Nicklow said he agreed to let the state park 3,000 utility trucks around his school’s arena and concert venues to facilitate that work.

“Any college president or chancellor who says it hasn’t been a wild or disruptive year is kidding themselves,” said Nicklow, whose school resumed classes online last week.

He acknowledged how tough it will be for some students to focus on academics when they don’t know where they’re going to live.

“Empathy is the word of the day,” Nicklow said. “Some students who had been coming to class in person will need to switch to remote. Others who lived off campus before the storm may now need on-campus housing.”

Southeastern Louisiana University President John Crain said he also expects recovery from the storm to be uneven among his students and staff. Ida’s eye passed west of campus, so people who live in that area are worse off than ones who live on the east side.

“Even when our campus is ready, and the majority of our people are ready, I know some won’t be able to return at all,” said Crain, whose own office was powered by a generator for several days after the storm swept through.

Southeastern’s in-person classes resumed Monday, and one big benefit of bringing students back on campus is the ability to stand up the school’s Covid-19 vaccination clinic again. The university administered 4,000 doses before Ida scuttled hopes for a smooth fall semester, and Crain hopes to make more progress in the weeks ahead. But he knows that’s a tall order.

“When you have a difficult situation, and then you have two at the same time, it doesn’t make either one of them any easier,” he said.