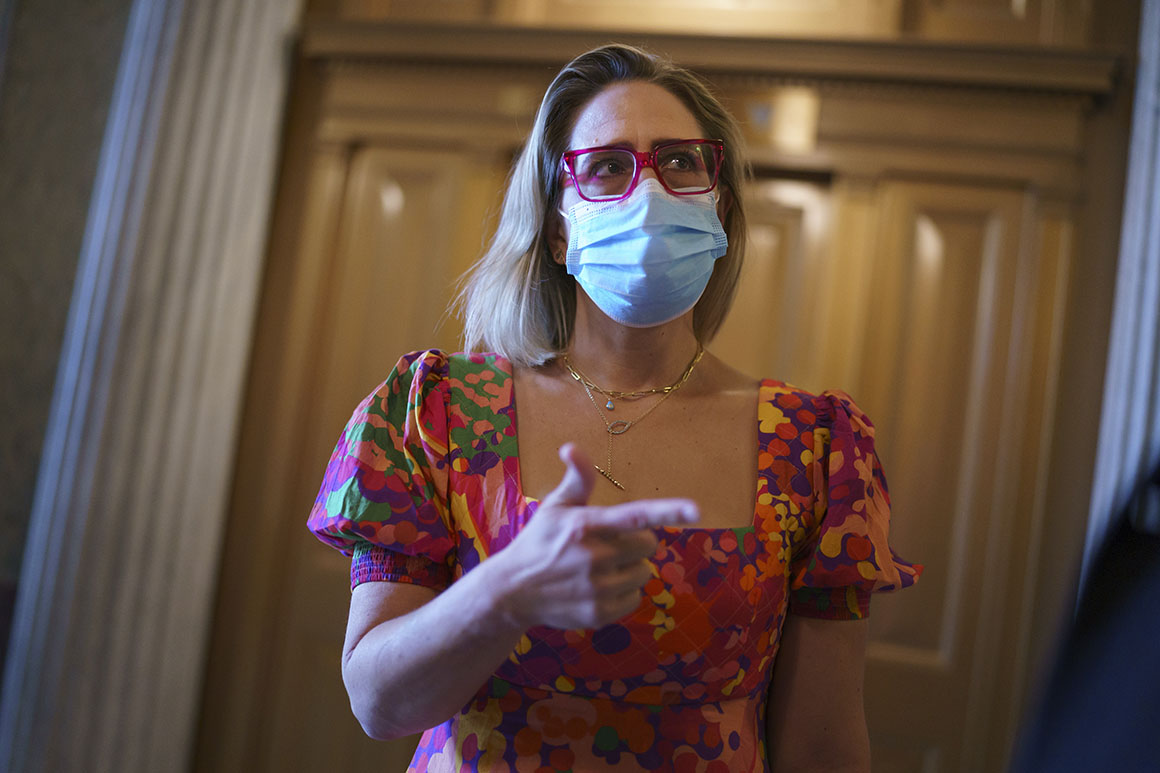 Democrats wanted clarity Tuesday from Sens. Joe Manchin and Kyrsten Sinema after back-to-back meetings with President Joe Biden. They didn’t get it.

During a private meeting with the president, Sinema made clear she’s still not on board with the party’s $3.5 trillion social spending plan and is hesitant to engage on some specifics until the bipartisan infrastructure package passes the House, according to a person who spoke with her.

“This is the third time she said she has told the president, ‘I’m not there,’” the person said, quoting Sinema as telling the president: “‘I’ve been very clear with you from the start.’”

Sinema has problems with both the price tag and some of the tax increases devised to pay for it. After returning from his White House meeting, Manchin said that he did not give Biden a top-line number and made “no commitments from my standpoint.”

Sinema and Manchin’s approach to the negotiations has frozen Biden’s jobs and families plan and potentially may lead to a high-profile failure of a bipartisan infrastructure bill on the House floor as progressives threaten rebellion. But without more details from the moderate duo, any hope of a bicameral agreement on Biden’s agenda is a pipe dream.

Manchin and Sinema met with Biden separately Tuesday, the second time in less than a week that they paid a visit to the White House to lay out their concerns and haggle with the president over reducing Democrats’ plans to spend $3.5 trillion. Sinema also returned to the White House to hash out details with staff as Manchin huddled separately with Biden for more than an hour.

Even as the House tees up a vote on the senators’ bipartisan physical infrastructure bill for this week, Manchin and Sinema have yet to publicly indicate how far they’re willing to go on Democrats’ party-line legislation addressing climate change, child care and a host of other party priorities.

The back-and-forth between Biden and the two senators is making Democrats anxious about the prolonged timeline for the negotiations. And many are in the dark about what spending figure either of them would support, let alone their policy objections.

“What I know is that the longer these debates hang out there the easier it is for the opposition to mislabel and twist what we’re trying to do,” said Sen. Chris Murphy (D-Conn.). “If we’re going to come to an agreement it would behoove us to do it sooner rather than later so that we can go out and start explaining it to people.”

Privately, patience is waning in the Senate Democratic caucus.

“I’m worried my colleagues are going to shoot themselves in the foot,” said one Senate Democrat, who spoke under condition of anonymity. “We should find a solid number and move on.”

For months, Speaker Nancy Pelosi and Senate Majority Leader Chuck Schumer (D-N.Y.) have insisted on a “two-track strategy,” which meant Democrats would not pass the bipartisan infrastructure package without the party-line social spending bill. But by setting up a vote Thursday on the bipartisan physical infrastructure bill, Pelosi is effectively de-linking the two, prompting consternation among progressives who don’t want to lose leverage on the social spending plan.

“The agreement from the beginning was that all the pieces would move together… and that one piece wouldn’t be broken off and moved ahead of the others,” said Sen. Elizabeth Warren (D-Mass.). “Both Leader Schumer and Speaker Pelosi and the Democrats in the House and the Senate all said that’s the deal. I want to make sure we hold to that deal. I don’t want to see that deal broken.”

Manchin and Sinema have consistently signaled that they do not support the package costing $3.5 trillion. During last week’s meeting, Biden urged Manchin to come back to him with a number that he could support. But Manchin has indicated that he’s in no rush to make a decision.

“We’re reaching a point where we need to bring this to closure. I think that’s obvious,” said Senate Majority Whip Dick Durbin (D-Ill.). “We have four major challenges on us at once: Funding the government, dealing with the debt ceiling, bipartisan infrastructure bill and reconciliation. That’s a big agenda. I think a breakthrough on one of those will help.”

Democratic leaders are starting to acknowledge that any social spending package that passes the House and Senate will have to take a major haircut from $3.5 trillion blueprint both chambers of Congress approved in August. But that’s not stopping some progressives from expressing their frustration with Thursday’s vote on the bipartisan physical infrastructure bill.

Senate Budget Committee Chair Bernie Sanders (I-Vt.) even called for progressives to vote the legislation down, should the White House and Senate moderates fail to reach an agreement. Meanwhile, Murphy added that he may have taken a different approach to the bipartisan infrastructure bill had he known it would be de-linked from the social spending plan.

“Clearly the rules are changing, sometimes that’s necessary given changing realities. But it can be pretty frustrating,” he said.

On the other side of the Capitol, House Democrats are paying unusual attention to Manchin and Sinema and are largely in a holding pattern until the two senators make a decision on a topline. Pelosi has indicated to members that she will not move legislation that can’t pass the Senate.

Rep. Hakeem Jeffries (D-N.Y.), the No. 5 House Democrat, said he remained hopeful that the conversations with Manchin and Sinema would lead to a tangible result “so we’ll know what’s possible in the House.” And Rep. Ro Khanna (D-Calif.) indirectly said Sinema is the House’s biggest problem during a closed-door meeting on Tuesday, predicting Manchin will get on board but expressing concern that a senator from a Biden-won state won’t give a number she’s willing to support.

Rep. Pramila Jayapal (D-Wash.), a leading progressive who met with Sinema recently, said of the duo: “They need to tell us what they don’t agree with. And we need to actually be able to negotiate.”

Still, Democrats are refraining from making any predictions about when Manchin and Sinema might make up their minds. And even as they wait it out, for the most part they’re declining to criticize the two moderates publicly, well aware that they will need their votes for any legislation that passes the Senate.

Sen. Mazie Hirono (D-Hawaii) reiterated Tuesday that she is “still waiting” for Manchin and Sinema to offer specifics about what they want.

When asked if she was frustrated with the two of them, she replied: “Just a tad.”

Heather Caygle and Sarah Ferris contributed to this report.