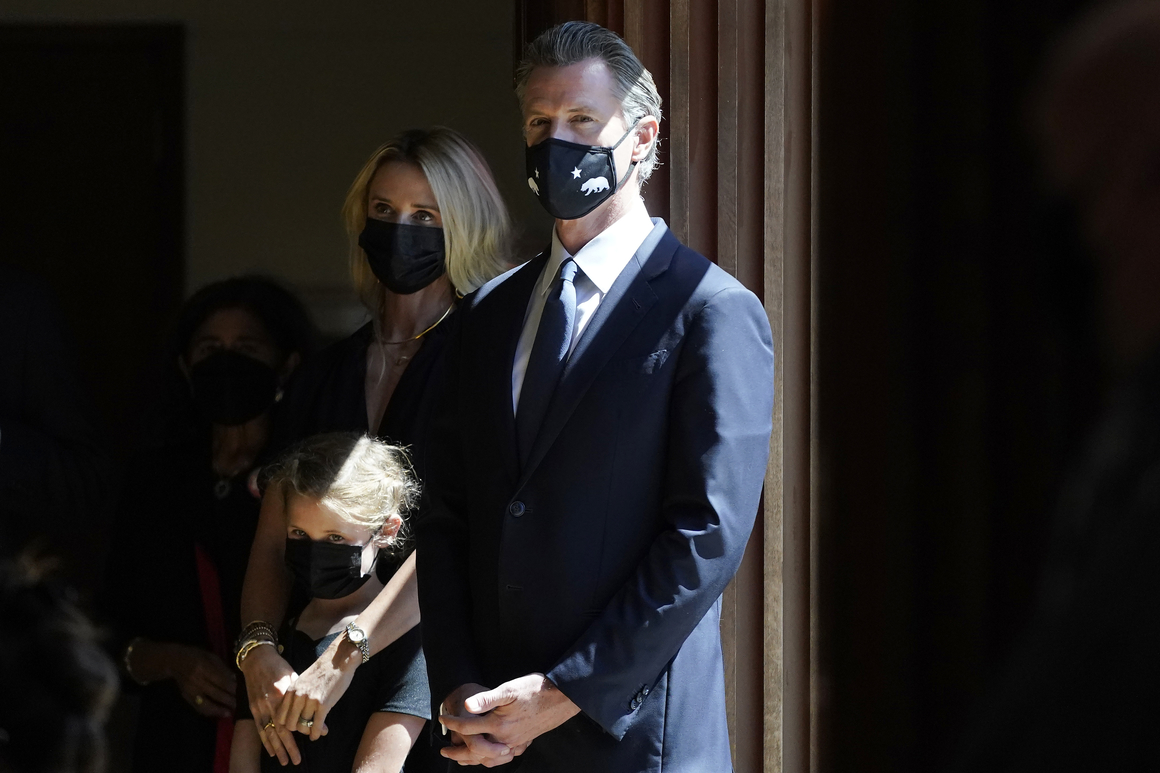 OAKLAND — Gov. Gavin Newsom will remain California’s governor after voters decisively rejected an effort to recall him in Tuesday’s election.

The conservative-driven effort to topple Newsom always faced long odds in a state where Democrats outnumber Republicans by some five million voters and Newsom cruised to a 24-point landslide in 2018. Democrats relied on a drumbeat of catastrophic warnings about a conservative Republican governor to motivate their base after fearing that lackluster turnout could cost them the election.

With nearly 8 million votes counted, Newsom was crushing the recall by nearly a 2-to-1 margin, according to results updated at 8:40 p.m. Pacific Time. That difference is expected to tighten as Election Day votes come in, but Republican ballots aren’t expected to come close to bridging the gap.

The governor will now enter the final year of his first term in a position of strength. He is expected to stand for reelection in 2022, and Republicans’ failure to oust him in an off-year special election fueled by conservative grievances suggests they face a steep fight to defeat Newsom next year.

“He’s going to be vindicated and it will discourage most credible candidates from running in 2022,” Democratic consultant Rose Kapolczynski said. “The Republicans have gone after Newsom for the last year and a half and they’ve failed, so what makes Republicans think they’ll have a better chance in a general election when the governor’s just convinced voters to let him stay?”

Powerful supporters helped propel Newsom to victory. He drew on a panoply of deep-pocketed defenders to stock a war chest with some $70 million and gain unrivaled capacity to communicate with voters. He enlisted national Democratic figures like President Joe Biden, Vice President Kamala Harris, Sen. Elizabeth Warren and Sen. Bernie Sanders. His campaign moved aggressively to unify elected California Democrats against the recall and dissuade any prominent Democratic candidate from entering the race.

Republicans, on the other hand, had no shortage of candidates. But none gained serious traction until talk-show host Larry Elder entered the race in July and leaped past 2018 gubernatorial candidate John Cox and former San Diego Mayor Kevin Faulconer, as well as reality TV star Caitlyn Jenner. While Elder energized conservative voters, he never toned down his talk-show rhetoric, giving Newsom an easy target for Democrats to fear.

Newsom’s argument that the recall was a costly distraction in the service of a larger Republican agenda appeared to resonate.

“I think it’s ridiculous that we have to have a recall, personally. Governor Newsom is not perfect, but it’s trying times, it’s been a stressful year and a half, and I think he’s guided us through a pandemic,” 40-year-old Hollywood resident Chris Ciccarelli said, adding he was impelled to vote in person on Tuesday after receiving a text message from the Newsom campaign. “What’s happening in Texas, I don’t want that to happen here, and it gets me very angry when I can see that there are forces at work trying to subvert the strides that we’ve made.”

The prospect of recalling Newsom once appeared to be a political fantasy. But the coronavirus pandemic reordered California’s political landscape. Conservative foes of the governor harnessed pervasive frustration with Newsom shutting down the state last winter and benefited from an extra four months to collect signatures. Newsom energized the long-shot campaign with his ill-fated decision to celebrate a lobbyist friend’s birthday at an opulent restaurant even as he was urging Californians not to gather.

Republicans seized on the French Laundry meal to lambaste Newsom as out of touch. They looked to stoke anger over protracted school closures and devastated businesses to argue Newsom’s mismanagement had caused lasting damage. The effort began to gain national attention as it appeared Republicans could have a real shot at reclaiming the governorship and breaking a generation-long losing streak in once-purple California.

But a receding virus and rebounding economy put Newsom back on firm footing. After some initial stumbles, California’s mass vaccination program helped to drive down infection rates to the point that Newsom was able to dissolve a system of county-by-county restrictions on June 15. Surging tax revenue defied dire fiscal forecasts and gave California an enormous budget surplus, billions of which Newsom converted to rebates back to taxpayers.

By the summer, Newsom had embarked on something of a victory tour. He touted California’s revival at triumphalist press conferences that doubled as campaign events, and he played game show host at glitzy lottery events that offered vaccinated Californians the chance to win prizes.

That upward trajectory led Newsom to convince the Legislature to move up the election date to mid-September, believing the electorate would be in high spirits. The Delta variant threw a wrench in that plan, driving up virus rates to the point that counties reimposed mask requirements and Newsom mandated vaccinations or negative tests for state employees, teachers and health care workers.

But rather than shy away from the types of restrictions that first propelled the recall, Newsom leaned into them. He made his closing argument a matter of pandemic contrast, posing a choice between California’s stringent rules — which Republican contenders vowed to unravel — and the looser approaches taken by Texas and Florida.

“The Delta surge was a real inflection moment in this campaign,” Newsom strategist Sean Clegg told reporters the night before the vote. “What Delta brought into clear, clear focus was, what the stakes are in this election when one party has basically become an anti-science, anti-, anti-vaccine, anti-public health party.”

Newsom also hammered Elder over positions that are mismatched to California’s liberal electorate, including his opposition to abortion rights, any minimum wage and aggressive efforts to fight climate change. Some Republican candidates sought to blunt Elder’s rise, arguing his extreme views and controversial past remarks about women would alienate voters. Faulconer and Jenner both called for Elder to drop out after POLITICO reported Elder’s former fiancee alleged that he waved a gun at her.

But none of the other top-tier Republican contenders — a list that also included Assemblymember Kevin Kiley and Cox — managed to break through and demonstrate broad support. They lagged in polls and proved unable to collect the magnitude of money needed to run a successful statewide campaign in California. The California Republican Party declined to endorse a candidate after party members concluded doing so could divide conservative voters and suppress turnout.

Unfounded claims of voter fraud may also have damaged Republicans’ chances of unseating Newsom. In the weeks running up to the vote, former President Donald Trump baselessly called the election “rigged,” Elder directed voters to a website preemptively claiming fraud had handed Newsom victory and conservative pundit Tomi Lahren assured Fox viewers that only fraud could save Newsom. Polls showed Republicans were confident of victory but distrustful of the voting process, a recipe for conservatives to reject any outcome but Newsom’s defeat.

Some Republicans denounced those claims as counterproductive and sought to reassure voters. Recall organizer Tom Del Beccaro told POLITICO that “anybody who discourages voters isn’t being helpful.” Faulconer adviser Ron Nehring tweeted that Elder’s website was “the most irresponsible act I’ve ever seen from a CA candidate in my 20 years in politics” and said claims of vote-rigging were “equal to telling Republicans to throw their ballot away rather than mail it in.”

There was evidence the warnings of wrongdoing suppressed Republican votes. Paul Mitchell of Political Data Inc., which has tracked voting trends and mail ballot returns in the recall, said early in-person voting for Election Day was not as robust as expected, and that “of course” Trump and Elder had an effect on GOP turnout.

“It is baffling that they’re out there doing things which should have the end result of reducing their share of the electorate that turns out,” Mitchell said. “They’ve told their voters to vote in person. And now, the largest day of in-person voting, they’re telling the voters the election’s over. It is insane.”

Now the party and Republican candidates will need to contend with the fallout of voters decisively repudiating the recall. That result reinforces the California Republican Party’s diminished status and could make it harder to generate enthusiasm around the 2022 gubernatorial election.

Elder has already telegraphed another run, telling radio station KMJ on Tuesday that he had become a “political force here in California” and was “not going to leave the stage.” But Republican contenders who fell short may struggle to convince donors and voters they should take on a reinvigorated Newsom in a general election rematch.

“At some point Republicans are going to have to address the math problem” that has relegated them to super-minority status in California, said Matt Fleming, who worked for the California Republican Party and the Assembly Republican caucus and now writes opinion pieces for Southern California News Group. “A loss in literally the most favorable political environment (Republicans) can have — which is a recall election — does not bode well for 2022.”

POLITICO’s Carla Marinucci and Alexander Nieves contributed to this report.