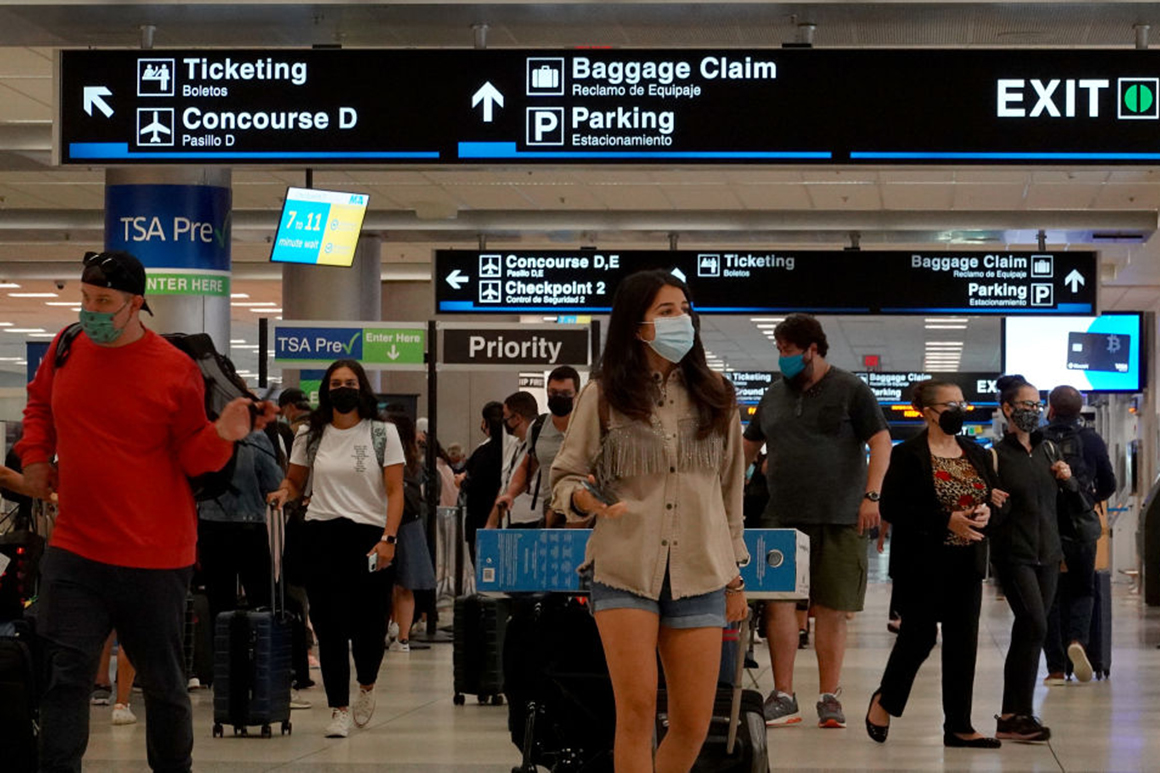 The man who ran former President Barack Obama’s Department of Transportation thinks President Joe Biden is going too soft on airlines and airline travelers as part of the government’s efforts to get the pandemic under control.

“I don’t think it would be difficult at all. It’s no different than showing your driver’s license to TSA,” LaHood said in an interview. “I don’t see it as a bureaucratic challenge to the airlines. I really don’t. You got to show ID in order to get through TSA, then make it a part of getting through TSA — that you can’t get through TSA unless you show proper identification, your ticket and a vaccination card.”

LaHood’s admonitions are the latest case of the White House facing pressure from allies and stakeholders to gain control of a metastasizing pandemic that has increasingly dominated the administration and its goals. Last week, Biden announced that he would be implementing an aggressive policy requiring federal workers and contractors to be vaccinated in addition to requiring private businesses that employ more than 100 people to vaccinate their employees or subject them to weekly testing. Absent from the announcement, however, was any policy with respect to airline travel and the possibility of requiring travelers to prove vaccination before boarding.

Industry officials have resisted such a requirement, saying it isn’t easy to implement and would require additional, costly infrastructure. And inside the White House, there are concerns that it could prove burdensome and only marginally effective in increasing vaccinations.

Among the biggest airline companies, there does not appear to be a consensus stance on mandatory vaccines for travelers. Airlines are comfortable with the current state of the mask mandate, according to a lobbyist close to the aviation industry. But the airlines have been wary of getting involved in what have become political debates concerning the coronavirus pandemic, the person said.

There are also questions about the federal government’s role in implementation of the mandates. Civil liberties groups have raised privacy concerns about any centralized vaccine database maintained by the federal government. And that’s something the White House has previously said it would not support.

LaHood said airlines could also explore having passengers show proof of vaccination before boarding. He said some airlines are likely to resist as they did when he was in the administration and moved forward with a passenger’s bill of rights.

“They pushed back heavily, but we moved ahead with it,” LaHood said. “The way I would do it is call all the airline CEOs to a meeting, get them on a Zoom call and say ‘look, we believe this is another way that we can get the country vaccinated and stop the spread of Covid.’ And just listen to them. But make the decision to go ahead with it. You don’t surprise them.”

White House officials say they have not ruled out any policy initiative that would help contain the pandemic. At the same time, discussions around airline policy have so far centered on international travel. When asked if a system involving domestic travel could be put into place, officials say their focus now is on the mandate policies from last week, which they say are already a massive undertaking operationally to put into place.

On Wednesday, White House press secretary Jen Psaki would not say whether the president supported domestic mandates for air travel. She would not elaborate on the level of discussions touching on the issue within the administration.

“There’s always a range of discussions of additional steps that can be taken by the federal government to protect us all from Covid, to reduce the spread,” Psaki said. “What we made a determination on last week was putting in place these mandates and requirements on businesses would have the largest impact in helping reduce the spread of Covid, protect more people and save more lives.”

This week, Biden’s top medical adviser, Anthony Fauci, said airline passenger mandates were a good idea, while the head of the White House’s Covid Response Team, Jeff Zients, said nothing was off the table and pointed to actions already taken like fines on those flouting mask requirements.

“We have a … very strong track record that shows we’re pulling available levers to acquire vaccinations and we’re not taking any measures off the table,” Zients said.

But White House chief of staff Ron Klain said on Pod Save America this Monday that he thinks the most effective way to utilize vaccine requirements is on those in a more “permanent” situation, like in a workplace rather than adding a layer of bureaucracy that could penalize those who are already vaccinated.

“We want to weigh the number of people [who] … get vaccinated versus the burden on the vaccinated — having to show proof every time you go on an airplane, having to wait in longer lines at TSA,” Klain said. “But I think it’s something we will continue to look at as things progress.”

Despite the comments from Fauci and Zients, some stakeholders have said that the administration has not engaged in significant discussion with the airline industry about prioritizing the need for domestic air travel vaccine mandates.

Rep. Eric Swalwell (D-Calif.) said that California Gov. Gavin Newsom’s resounding defeat of a recall attempt on Tuesday was a sign that Biden has the political support to go harder on mandates, including on domestic flights.

“We have to own the outrage,” Swalwell said. “We can’t do enough to climb out of this pandemic hell.”

Polls have also shown growing support for vaccine mandates overall as well as specific support of vaccine mandates for airline travelers, which are already in place or are being developed in other countries. Last month, Canada announced that by the fall, all air, train and cruise passengers must be fully vaccinated.

Australian airline Qantas last week said it will require proof of vaccination for all its passengers traveling internationally. Qantas CEO Alan Joyce said that while the airline’s policy was still in the works, it would only carry vaccinated passengers moving forward. “Because we think that’s going to be one of the requirements to show that you’re flying safe and getting into those countries,” Joyce said during a Trans-Tasman Business Circle forum. “We’re hoping that can happen by Christmas.”

Airlines based in the U.S. haven’t ruled out instituting policies that require proof of vaccination for travel. And some already encourage travelers to use technologies they’ve developed to help upload and share relevant information. American Airlines and United, for example, each have ways for passengers to upload vaccination cards, their origin and destination of travel. But there is no requirement that they show vaccine status before boarding a plane, unless they travel to a country that requires COVID-19 vaccination.

But private industry, in this case, appears to be waiting first for the feds to act. In a discussion with NPR, Scott Kirby, CEO of United Airlines, called vaccine mandates for travelers a “government issue,” but noted the company has the means to expand a proof-of-vaccination standard.

“For us to do that, we would probably require some sort of government directive,” Kirby said Friday. “We have prepared ourselves with technology to be able to upload vaccine cards and track that and implement it if the government ever chooses to go in that direction.”

Pandemic-related restrictions on airline travel is an expensive proposition, one that has vexed the Biden administration before. In July, Commerce Secretary Gina Raimondo said she was advocating to loosen some of the restrictions placed on international travelers, a sentiment that two industry lobbyists said the White House viewed as freelancing.

Vaccine mandates on airline travelers could pose potential harm to the airline industry’s bottom line as well. For one, airline bookings have taken a downswing. The Covid-19 Delta variant effectively halted a nascent recovery in bookings for the U.S. airline industry, with growth slowing in the summer months at a time when airlines attempted to get back to 2019 travel levels.

But if carriers move to have data systems in place, more U.S. citizens could travel abroad. Airlines for America, for example — the trade group for the major U.S. airlines — has publicly called for a science-based framework to accelerate reinstituting international travel.

“U.S. airlines have been — and continue to be — strong advocates for a risk-based, data-driven approach to safely resuming international travel as laid out in the blueprint,” A4A President and CEO Nicholas Calio said in July.

“We have leaned into science throughout this crisis, and research has consistently determined the risk of transmission onboard aircraft is very low,” Calio said, citing data from an October 2020 study from the Harvard Aviation Public Health Initiative which concluded that being on an airplane is safer than routine activities “such as eating in a restaurant or going to the grocery store.”

The science on transmissibility on board planes is far from settled, though.

Several studies have shown that the risk of transmitting Covid on board planes to be low, citing planes’ powerful air filtration systems and consistent mask wearing on board. But other researchers have found apparent cases of widespread transmission on planes. In addition, a CDC study from last year that modeled ways to reduce on-board transmissibility found that blocking middle seats could reduce the spread of Covid by up to 57 percent, though that study examined those not wearing masks.

“The science is clear — it is time, if not past the time, for the U.S. government to take action and reopen travel between the U.S. and low-risk countries,” Calio said.

Laura Barron-Lopez contributed to this report.