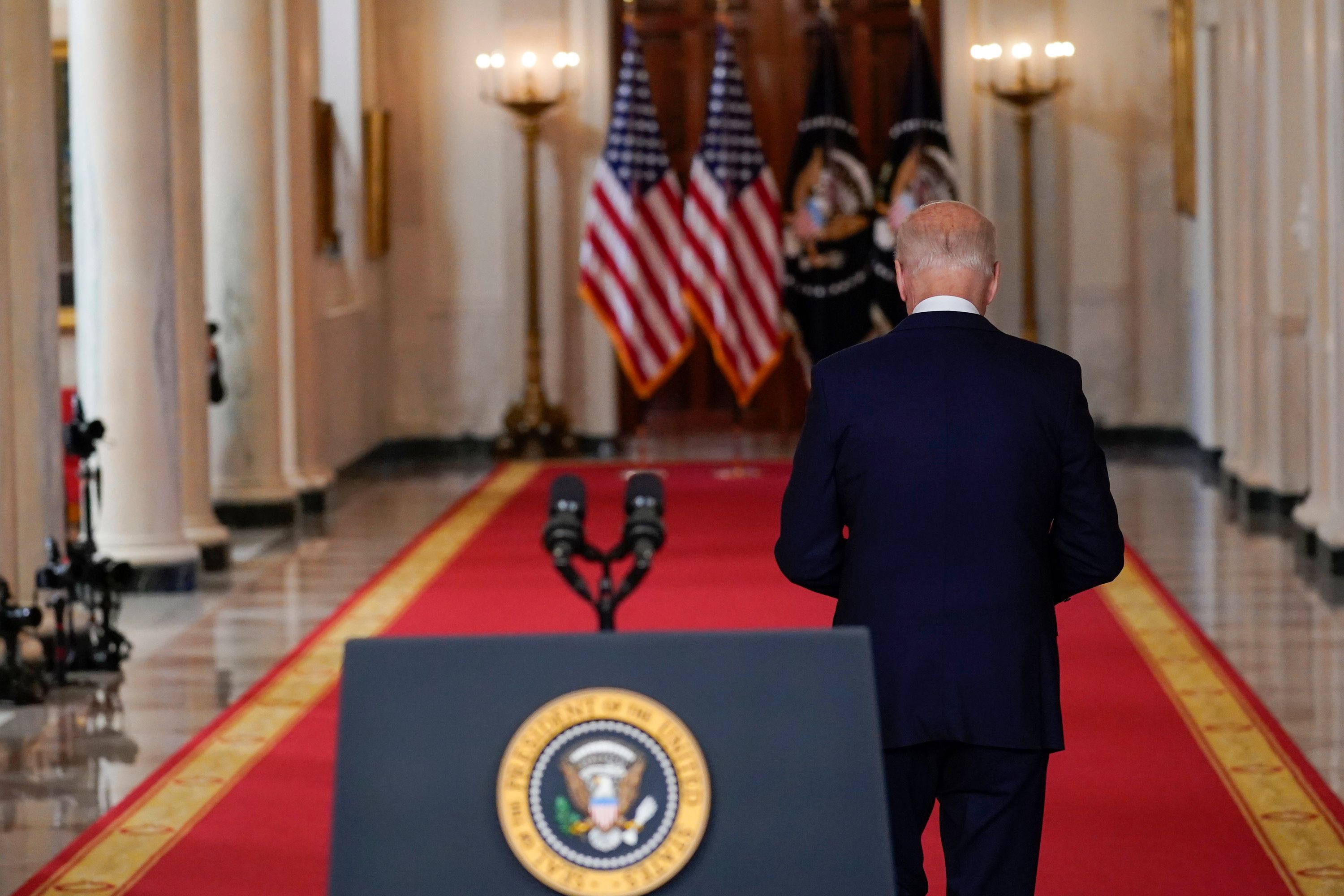 They were words no president has ever spoken, at least not since the Cold War began three-quarters of a century ago.

They spoke not of global responsibility nor the “indispensable” role of the United States, but of what this richest and most powerful nation could and should not do, and the astonishing financial and human cost of trying — and failing.

We are, President Joe Biden said, “ending an era of major military operations to remake other countries … trying to create a democratic, cohesive and united Afghanistan — something that has never been done over centuries in Afghanistan history.”

We spent “$300 million a day for 20 years,” he said. “What have we lost as a consequence in terms of opportunities?”

And while he talked of the heroism of our military, intelligence personnel and diplomats, Biden’s account of what veterans suffered was nothing less than searing: “A lot of our veterans and their families have gone through hell,” he said with more than a touch of anger as he talked of traumatic injuries, noting that “18 veterans on average die by suicide every single day in America, not in a far-off place.”

Much of the commentary on Biden’s speech today will focus on his defense of the Afghanistan withdrawal strategy — his celebration of the U.S. military’s mass evacuations and whether his promise to get those left behind has the ring of plausibility.

But perhaps more significant for American politics is that Biden seems to be embracing a belief now shared across ideological lines: America’s international role has been an exercise in overreach. For more than a decade, in fact, this has been a more powerful current than the foreign-policy establishment might like to admit. This message was one of the less-appreciated strengths of Donald Trump’s campaign in 2016 (muddied though it was by a heavy dose of nativism). It was evident in the sharp turn against George W. Bush in the 2006 midterms as the Iraq War, which purported to turn the country into a bulwark of freedom, crashed and burned. It bolstered the candidacy of Barack Obama at the expense of Hillary Clinton, who voted for the Iraq War. And it lies at the heart of the appeal Biden made today: Whatever went wrong as we left Afghanistan, his argument went, we had to get out and we have to learn from that misguided adventure.

But in making this argument, Biden left a larger question unanswered: what are we to do about the immense global military machine that remains very much in place? As intent as Biden is on bringing the so-called forever wars to an end, the reality is that he and others skeptical of U.S. intervention abroad need to look not at particular conflicts, but at America’s massive military apparatus. Thus far, such criticism has been confined to the periphery of national security debates. But Biden may have laid the foundation for a more fundamental rethinking of the enormous, and largely unquestioned, amount of resources America expends in the name of national security.

The United States has a military budget of some $700 billion a year, supported by a web of multibillion-dollar procurement contracts that turn members of Congress into enthusiastic lobbyists for weapons that do not work and drain the treasury. We have 800 bases in dozens of nations around the world. Our spending, on armed conflicts and more generally on preserving this empire, staggers the imagination. Biden did not mention this in his speech, but the combined cost of the Afghanistan and Iraq engagements would fund his $3.5 trillion spending proposal many times over. Critics of his domestic plans deplore that amount, but it’s only a fraction of what we have in fact spent not on child care, free community college, universal pre-K and better care for older people, but on a pair of largely futile conflicts — one bogged down for years in stalemate, another irreparably tainted by the false pretenses under which it began.

These numbers don’t lie. Since America gained superpower status in the early to mid-20th century, it has built a military footprint that all but guarantees the country will be tempted to try and solve problems far from its shores, whether counterterrorism, nation building, humanitarian intervention in a genocide or something else. This is the reality that Biden and future presidents similarly inclined toward restraint will confront.

It is not hard to imagine that this deeper message of Biden’s speech could emerge as a more salient political argument in the coming months. The upcoming midterm and presidential election cycles may feature debate not just about Afghanistan and how we left, but about what we have been committing lives and resources to for decades, and how much longer we are prepared to do it. Elements of the left and the right have already joined hands in opposing “muscular” U.S. policies in the Middle East, Asia and Europe. But the next step may be to question the premises that makes those policies possible — and their cost.

There is no ideological pattern to these arguments. We may see it from the Republican contenders for the presidency. We will likely see it from the left, as centrist Democratic incumbents face primary challenges from progressives.

Back in 1963, President John F. Kennedy, on a speaking tour in the American West, discovered that evoking the nuclear test ban treaty and a rethinking of the Cold War was winning huge applause even from essentially conservative regions. He was planning to make “peace” a central case for his reelection. After three-quarters of a century, and tragic misadventures from Vietnam to Iraq to Afghanistan, I wonder if Biden’s speech today, with its clear caution that we cannot remake the world based on our illusions, may be the start of a larger debate about the U.S. military — a debate this country has never really had but is long overdue.